As the ASO looks forward to a fresh start at this year’s Tour, PEZ’ Guy Wilson-Roberts looks back forty years to 1968 when the Tour de France hoped to prevent doping in the peloton and ensure a tour of good health following Tom Simpson’s death the year before.

Last year’s Tour was, on all but the level of fan support, a disaster for director Christian Prudhomme. While other top riders were being ejected for positive dope tests, Prudhomme was forced to take decisive action in the case Michael Rasmussen and in his media appearances was visibly angry with having to deal with a situation he believed the UCI should have dealt with before the race started. As the doping controversy mounted, German television suspended its coverage and local French newspapers called the Tour ‘dead’. 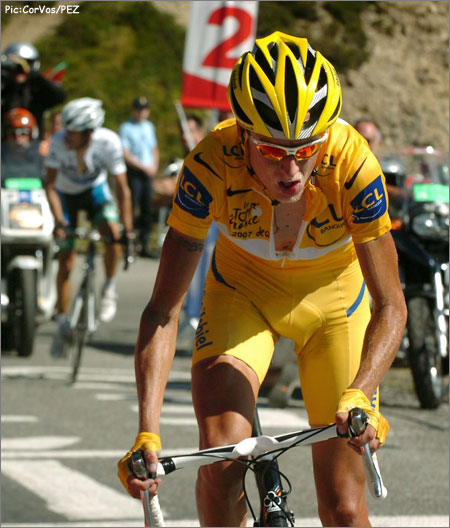 This year, Prudhomme seems determined to prevent a repeat, proclaiming in an interview in the official race programme that the Tour is not dead, it’s just changing. He has also taken steps to reduce the risk of scandal, going so far – some say too far, others say not far enough – as to ban Team Astana from competing, which has excluded last year’s winner, Alberto Contador.

This will be the second year in a row that the yellow jersey winner has been excluded but Prudhomme has been unrepentant. In the official programme interview he declares that the Tour will make new heroes – it’s clearly more about the race, not the riders, in his view. And in tandem with the exclusions, the Tour is now running under its own rules, virtually outside the UCI’s structure, and drug testing has been revamped and stepped-up.

The message is clear: this will be the Tour without doping. 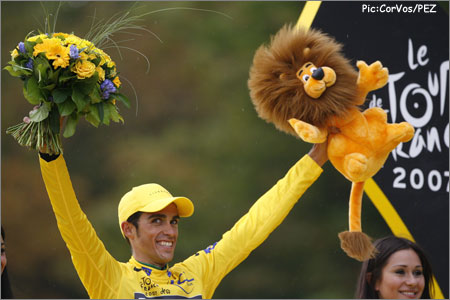 The Tour’s frustration with doping has led to defending champion’s Alberto Contador’s controversial exclusion along with his Astana team.

Forty years ago, in 1968, the organizers had a similar message. That year’s edition would be the Tour de la Santй – the good health tour. It even started in the mineral water town of Vittel to emphasise the message that the riders were racing clean. Also, to supposedly lessen the physical demands on riders, there was 300 kilometres less overall, shorter stages, and eleven flat stages before reaching the mountains.

This fresh start had been prompted by Tom Simpson’s death on Mont Ventoux the year before, and the Tour’s organizers determination to tackle the issue of doping head on. As well, the February winter Olympics for 1968, held in Grenoble where stage 18 of the Tour was scheduled to finish, had seen the introduction of the first major doping (and gender!) tests. The summer Olympics in Mexico City in October 1968 would also have major drug testing.

Ironically, given the criticism in recent years that it has not done enough, the UCI was at the forefront of anti-doping efforts in sport. These efforts were supported by Dr Pierre Dumas, who had been appointed official doctor on the Tour de France in 1952. He’d been shocked by the extent of the doping in the peloton. In 1955 he successfully revived Jean Mallйjac on the slopes of Mont Ventoux, in an eerie premonition of his unsuccessful attempt to revive Tom Simpson in 1967. Mallйjac was full of amphetamines when he collapsed and never raced again after his brush with death. Simpson was not so lucky. Another rider, Dutch racer Knud Jensen had been an earlier victim of doping, collapsing at the Rome Olympics in 1960 with a cocktail of amphetamines and a blood diluting agent in his system.

Dumas had started testing amateur riders in France in the early 1960s, which gave him valuable experience in helping promote tests at the wider European and Olympic level. Belgium had also introduced widespread dope tests in 1965 and, according to author Les Woodland, testers estimated that over a third of professional riders were doping.

Early drug tests for the Tour de France were poorly organized and the riders chaffed at the amateurishness of the procedures. In 1966 the riders staged a protest in Bordeaux during the Tour, with Dumas receiving the bulk of the criticism. Doping at the time lacked the same stigma of cheating as it does today. Fausto Coppi and Jacques Anquetil had spoken openly about it. As Rudi Altig said: “We are professional cyclists, not athletes.”

Despite the protests and grumblings the Tour de France of 1968 was launched with increased testing, now for the end of every stage. They appeared to be successful and only two riders tested positive during the whole race. But the Tour almost never started at all, for entirely different reasons. 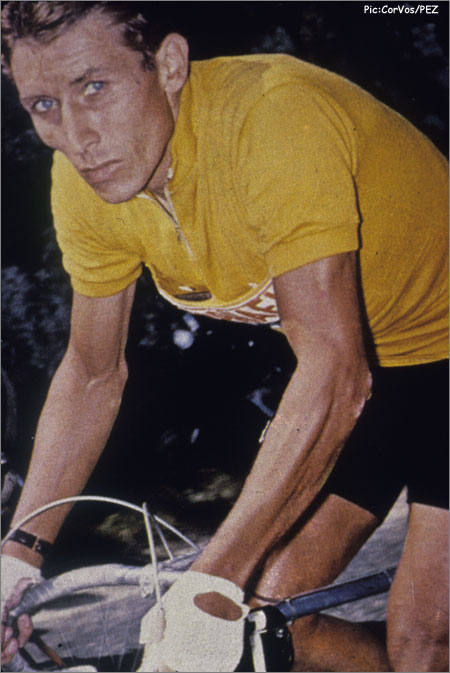 French hero, Jacques Anquetil, was no stranger to doping.

As it was elsewhere, 1968 was a politically charged year in France. The US was in turmoil over the Vietnam War, which prompted President Johnson not to seek re-election, and Martin Luther King and Robert Kennedy were both assassinated. In Europe, in August, the Soviet Union invaded Czechoslovakia, which, in the sporting world, led to protests at the Mexico Olympics, games that also featured other political gestures from athletes.

France faced its own crisis that year with French students protesting and demonstrating in almost spontaneous riots during May in Paris, which eventually prompted a general strike throughout the country of between 7 to 10 million workers. The country seemed paralysed, with De Gaulle’s presidency and government under threat, before a public backlash against the students and the strikers led to a general election that actually swung the political balance back to the Gaullists (although De Gaulle would resign in 1968).

The elections were at the end of June, but there was still unrest in the country and the Tour’s organizers were apparently reluctant to hold the race. But the government insisted, part of an effort to return to the normal pattern of work and summer holidays, and the Tour went ahead as planned. Still, while the radical students and workers had failed to bring down the government (they had not really even tried), a new group of radicals – the soixante-huitards – had defined themselves. 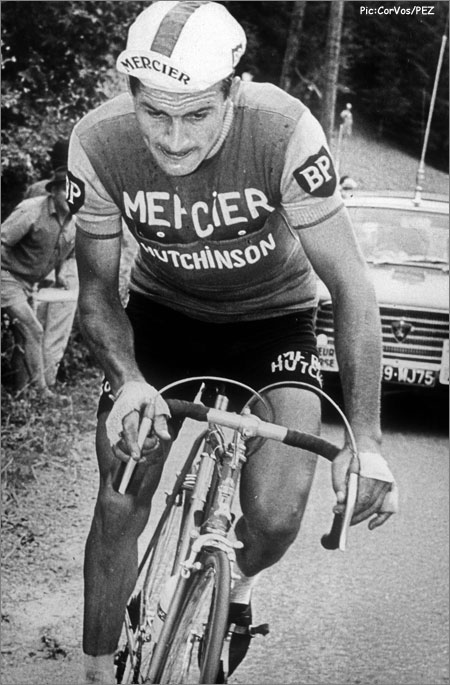 Raymond Poulidor’s 1968 Tour came to a bitter end following a crash on Stage 15.

For the Tour itself, the strikes in wider France set a curious precedent. Bored with the early stages through Belgium and the north of France, the journalists following the Tour decided to stage their own strike action – ironically in Bordeaux where the riders had protested against dope tests in 1966. As the journalists staged their sit-down at the roadside, Dr. Dumas apparently remarked, “Ah, la Sorbonne des velos”, making the comparison to the university students in Paris in May. 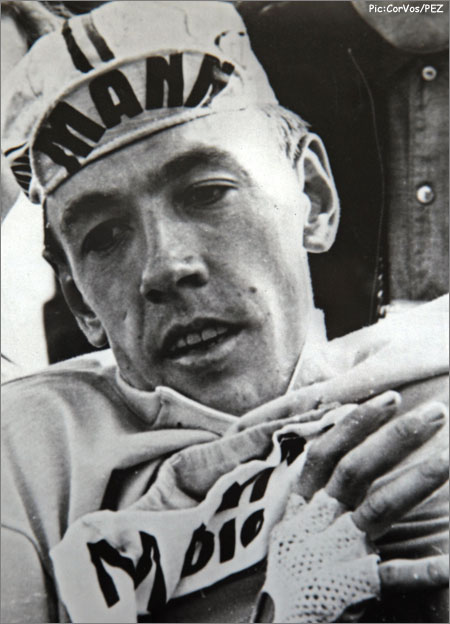 The Tour, though, turned out to be a thrilling affair in its latter stages. Like 1967, it was raced with national teams (the last year in this format before the return to commercial teams). Raymond Poulidor dashed France’s hopes with a crash on stage 15 that forced him to abandon. He never wore the yellow jersey, which, for much of the race, was held by Georges Vandenberghe from the Belgium B team. Belgium threatened to take it all the way to Paris with Herman Van Springel from the Belgium A team taking it over with five stages to go.

But Van Springel had only 16 seconds of lead over Dutch rider Jan Janssen (fifth in the 1967 Tour) going into the final stage, a 55 kilometre time trial into Paris to the Vincennes stadium, a new finishing location for the Tour following the demolition of the Parc des Princes velodrome the year before (there was no Champs-Йlysйes finish until 1975). 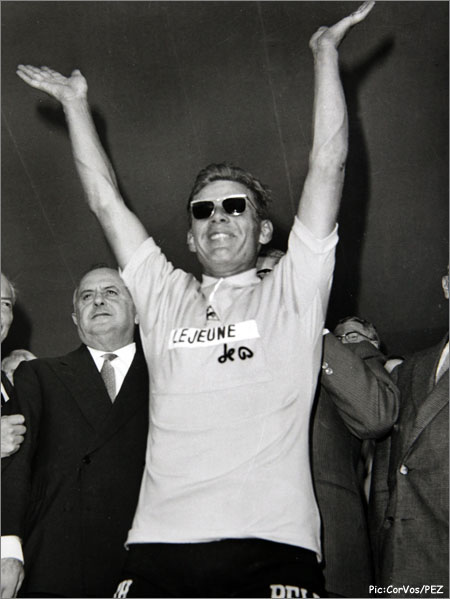 …But it was Jan Janssen who took the win in the final stage time trial in LeMondesque fashion…21 years ahead of LeMond.

Reminiscent of Greg LeMond in 1989, Janssen rode a blinding time trial, which was enough to take 54 seconds off Van Springel and put Janssen on the podium as the winner by 38 seconds and make him the first Dutch rider to win the Tour. This would also be the smallest margin of victory in the Tour until 1989.

The 1968 Tour de France did not eliminate doping from the event, however, despite the new drug tests. That it was run at all, following Simpson’s death in 1967 and the upheavals of 1968, seems remarkable and the Tour this year certainly does not face the same challenges.

It may well be, though, that this year’s Tour will be all about the racing, as Prudhomme has said he wants it to be, and not about doping. Also, with a number of favourites, it could well produce a surprise winner in the final stages, just like in 1968. To complete the comparison, on the combined Swiss and Luxembourg team in 1968 was one Jonny Schleck. He abandoned mid-race but will no doubt this year be watching two of his sons – Frank and Andy – contest this year’s Tour, forty years later.

Toolbox: Comparing Yourself With Others