Eddy Merckx almost didn’t ride the 1969 Tour, during that year’s Giro – which he’d won in 1968 – he failed a drug test and was thrown off the race. Pictures of him lying on his bed, tears running down his face, flashed around the world. The UCI eventually let him off, but a viciously determined Merckx arrived at Le Tour and such a display of domination has rarely ever been seen before or since.

My dad was ‘careful’ with money when I was a kid. We had a tiny black and white TV; periodically he would change valves and/or prod about in the back of the thing with a large screwdriver. There would be a flash, a bang and Paw Hood’s best Royal Navy swear words would ring around the flat.

One Sunday, in July 1969, the beast was behaving itself for once – it sat quietly hissing in the corner as the early evening BBC news was broadcast; “live from London.”

There was a big cycle track, packed to bursting with fans, but no cyclists. All of a sudden, a rider appeared on the concrete. Hats and pieces of paper flew into the air and instantly the huge crowd began to chant; “Ed-dy! Ed-dy! Ed-dy! Ed-dy!” 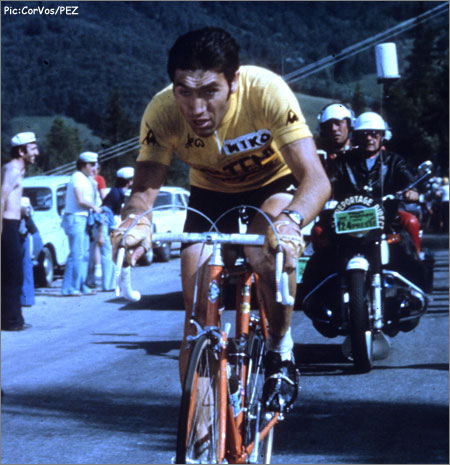 I was fascinated, I knew nothing about cycling, but I could see that the guy was cool; he looked streamlined on the bike and there was a lot of power in his long legs, as he urged the white machine around the track. As he came into the finish staright, he threw his arms high and freewheeled across the line, the chants became frantic; “Ed-dy! Ed-dy! Ed-dy! Ed-dy!”

In best BBC English, the newscaster told me; “the cyclist Eddy Merckx today became the first Belgian to win the Tour de France for more than 30 years.”

I’d only seen the guy for ten seconds but I knew I had a new hero – 40 years later, he still is.

Eddy Merckx almost didn’t ride the 1969 Tour, during that year’s Giro – which he’d won in 1968 – he failed a drug test and was thrown off the race. Pictures of him lying on his bed, tears running down his face, flashed around the world. 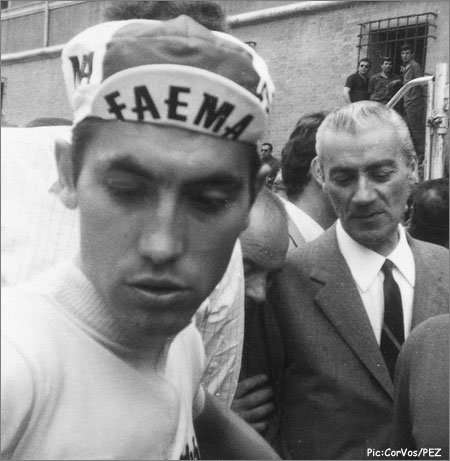 There was outcry, talk of ‘spiked’ drinks and questions raised in the European parliament.

Eventually, the UCI relented, his suspension was lifted and Merckx launched into an orge of huge training runs to make up for time lost in the doldrums of uncertainty.

The 10.4 kilometre prologue in Roubaix seemed made for him, but Italian kitchen company, Salvarani’s German strongman, Rudi Altig was six seconds too quick for Merckx and it was his broad shoulders upon which the yellow jersey came to rest.

Sunday was a split stage, with a 147 kilometre dash from Roubaix to Merckx’s back yard, the Brussels suburb of Woluwe-Saint-Pierre. Eddy could finish only fifth to ‘Mr. 10,000 volts’ (now that’s a proper nickname!), Italian world champion to-be, Marino Basso, in the colours of salami company Molteni – for whom Eddy would one day win many a race. 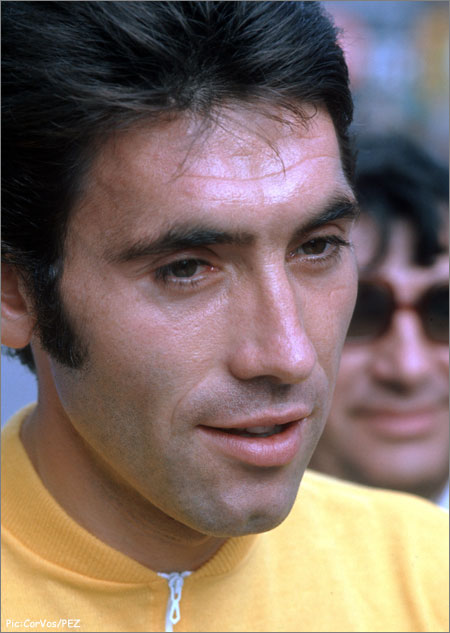 There were no slip ups in the afternoon as Eddy drove his Faema (makers of the world’s coolest coffee machines) squad to victory over Jan Janssen’s Bic team in the TTT around Woluwe.

The Belgians were ecstatic as their golden boy pulled on the maillot jaune.

The next day the jersey stayed with Faema, but on the back of Julien Stevens, Merckx’s Belgian team mate who won from a late break to take the shirt off his boss’s back.

Stevens held the jersey on stages 3 and 4 as Belgians Eric Leman (Flandria) and Rik Van Looy (Willem 11) – in the twilight of his career – took the flowers.

Stage 5, and Stevens lost his jersey in the Vosges to France’s Desire Letort in the black and white chequers of Peugeot-BP as the ecentric Portuguese, the late Joaquim Agostinho (Frimatic) took the first of two stage wins. 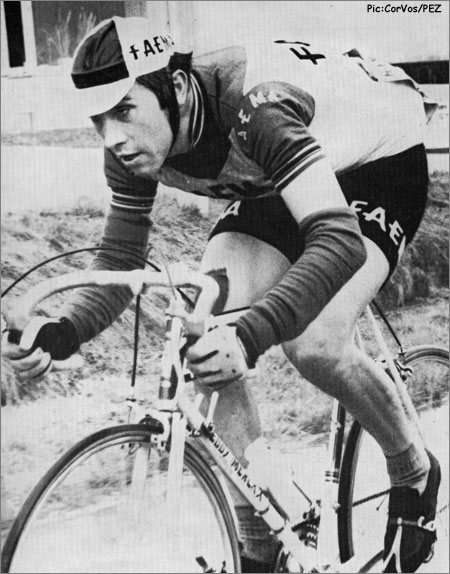 It was on the sixth stage that Merckx started his demolition job, dropping the entire field, not by attacking, but by simply setting a tempo on the Ballon d’Alsace which no one could live with. Stage 4 winner, Van Looy was among those who failed to beat the time cut and was homeward bound. Merckx was back in yellow by two minutes plus.

Stage 8 went to a lone break by Spaniard Mariano Diaz (Fagor) and then Merckx was at it again; winning the stage 8A individual TT by three seconds from Altig. The afternoon stage went to another of the Italian salami salesmen, Milan – San Remo winner Michele Dancelli. 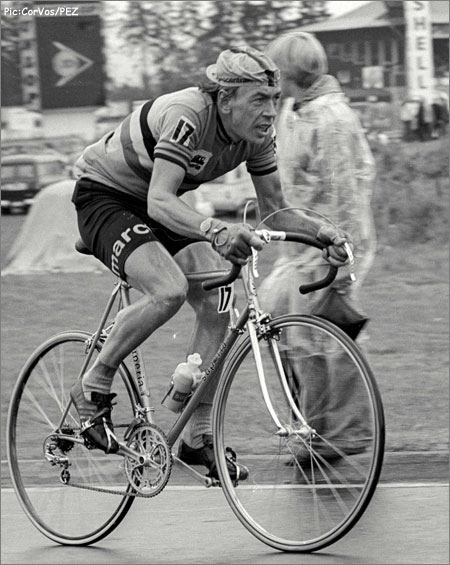 The next day saw Merckx in benevolent mood, after he and 1967 Tour winner, Roger Pingeon of Peugeot had dismembered the field on the road to Chamonix, the Belgian let the Frenchman take the stage; his lead was now over five minutes.

Stage 10 and it was another Belgian win, as ‘Monsieur Bordeaux-Paris,’ Herman Van Springel from the Mann team took the honours.

If you had a group discussion with any of the recent Tour winners, including Indurain and Armstrong and asked what they would do with a five minute GC lead, they would probably chant in unison; “defend!”

But that was why “Ed-dy” was different; stage 11 saw him up the road again to take the stage and nudge his lead towards six minutes. Merck’s breakaway companion, former Tour winner, Felice Gimondi (Italy & Salvarani) had expected the stage as a ‘gift’ but hadn’t done enough spells to merit the big man’s generosity!

Stage 12 saw Gimondi grab back his self respect as he beat Merckx on the cinder track at Aubagne; the gap backto Pingeon in second place was seven minutes now. 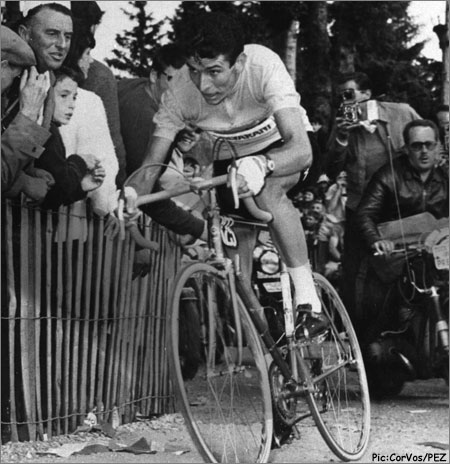 Stage 13 was for the Belgians again – as Merckx’s team mate, Guido Reybroek took the sprint in the break he was policing.

Agostinho, who sadly would later die, after crashing into a dog in a race in Portugal took stage 14.

The stage 15 individual TT saw Merckx on fire as he blasted a minute into Pingeon in just 18.5 K; the lead was now eight minutes. 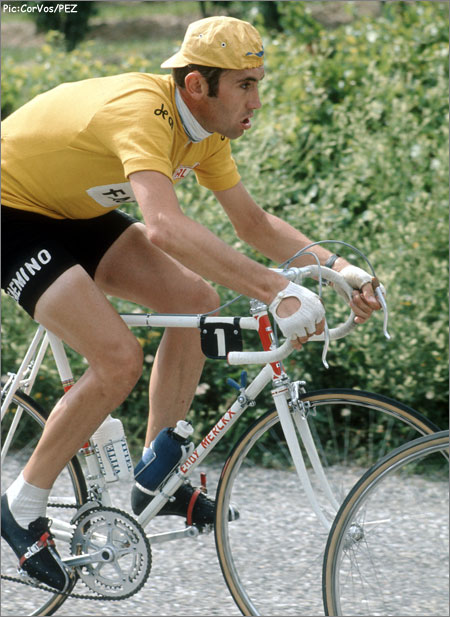 Peugeot confirmed their good form with home boy Raymond Delisle taking stage 16, but the next day was to see the stuff of legend from ‘Big Ted.’

With the temperature in the 90’s; some 140 kilometres of the 214 kilometre stage to go, including the climb of the Aubisque and his DS Driessens pleading with him to see reason, Merckx bolted. At the finish in Mourenz, second placed on the stage Dancelli was at 7-56 and Merckx lead on GC from Pingeon by 16-18. Superlatives are hard to find; why did he do it? – just because he could!

Stages 18 and 19 were special for us Brits as Barry Hoban, riding for the French Mercier-BP squad won them both – Barry also remains one of my heroes! 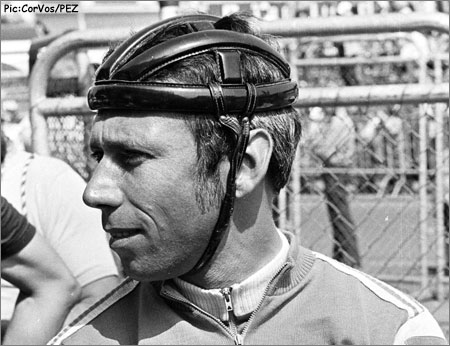 Lanterne rouge, Pierre Matignon of France cheekily took his Frimatic colours to victory on stage 20 – but Merckx was keeping a close eye on him in second spot on the stage; after all, Matignon was only three-and-a-half hours down!

The last stage, 22b was that time trial I saw on TV, into the “cipale” track in Paris. Needless to say, Merckx won – by a minute, from Hoban’s team mate, Raymond (eternal second) Poulidor of France. 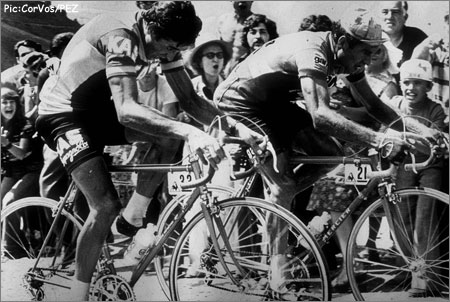 The final overall margin for Eddy was 17-54; and by-the-way, he also won the mountains, points, combine and lead Faema to the team.

Four more Tour victories and hundreds of other wins would follow for Merckx, but few races have ever been as emphatically won as the 1969 Tour de France.