Race Report: The biggest show in bike racing rolls to a multi-colored, sweating, exhausted halt on the Champs Йlysйes and with the classification battles pretty much fought out over the last 3500kms, only one crown remains to be claimed … who gets the glory of winning the stage on the most beautiful avenue in the world?

Really, do you have to ask? By now, you should know that barring an alien invasion Mark Cavendish is guaranteed the win. Cav got a blinding leadout from Mark Renshaw in a high-speed game of chicken with Garmin – Slipstream, winning by a couple of tram lengths. Six stage wins in one Tour? That’s up there with Freddy Maertens in his pomp. 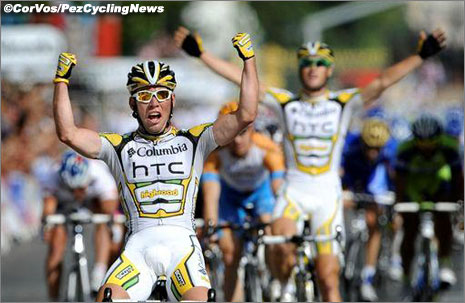 Once the last survivors of a mid-stage breakaway were caught with five clicks to go, Tyler Farrar’s Garmin boys gave it everything to outsmart the Columbia-HTC train. Christian Vande Velde did a colossal turn at 3.5kms left, handing over to David Millar.

Under the flame rouge, and George Hincapie gets back on the front for Columbia. Cav’s in the wheels; Farrar’s there, too. Two corners to go … Garmin – Slipstream jump Columbia, but Renshaw’s having none of it.

Renshaw dives into the final right-hander, cutting off the Garmin train, who have to slam on the brakes … Renshaw’s got no fear for his life and screams through the turn, dragging Cavendish clear and into a HUUUGE winning margin.

Renshaw’s celebrating, arms up, before Cav is, and the Aussie cruises home in second behind the Manx Missile. Farrar gets third, with Ciolek next and Hushovd in fifth to secure the green jersey.

The peloton comes home and Contador is giving it the ‘Victory Vs’ as he freewheels over the line to confirm his overall victory. There’s plenty handshakes and congrats for the returning champion, as the defending champion, Carlos Sastre, crosses himself in the background. 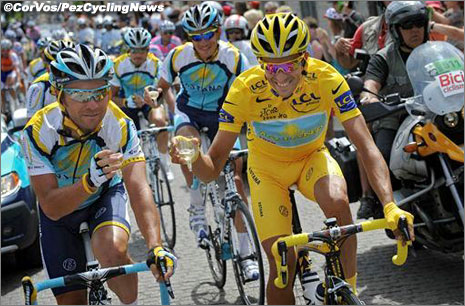 The Final Act Of 2009
Only 164 back-slapping, champagne-swilling kilometers stood before the 156 riders still rolling and the end of this year’s Tour. Pretty much flat the whole way with a couple of intermediate sprints at 120 and 133kms raced, for Hushovd and Cavendish to think about.

The stage into Paris is always the day of a thousand photo ops: riders smiling and chatting, Fabian Cancellara taking pictures on his mobile phone, Contador horsing around with a Spanish flag, waving it around like a loon before knotting it round his neck, a la Superman.

Escapees Versus Sprinters
It’s all relaxed on the run-in to Paris. The riders plotting an escape don’t want to piss people off by going too early. Klцden and Armstrong are cruising at the end of the Astana train, having a chit-chat. Everyone’s together and on-message as they sweep into the French capital’s suburbs.

54 kms to go, and they’re under the road at the Jardin des Tuileries for the first time, out into the sunshine again. Gregory Rast is towing the Astana line … 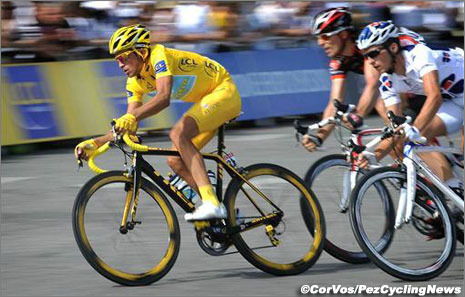 Columbia-HTC aren’t taking any nonsense and immediately crank up the chase. Dumoulin leads Beppu and Barredo through the first intermediate sprint, and the gap is out to 30 seconds.

Katusha launch a double-team counter, Ignatiev towed by a team-mate out of the peloton, and then hitting the afterburners alone, but it’s a forlorn hope. He’s back in the main field in no time.

Four laps to go and the leading group has 36”: Columbia-HTC and Cervelo Test Team are doing all the work.

Three laps to go and Columbia-HTC have things in hand – the gap is down to 21 seconds, and Hushovd is sitting tight on Cavendish’s wheel. In the break, Beppu and Barredo are pouring it on, desperate to survive.

Two laps to go and it’s just 12 seconds between escapees and pursuers. Maxime Monfort is screaming along on the front of the peloton, Kirchen gritting his teeth behind. Armstrong is in Popovych’s slipstream, the Ukranian dragging the seven-time champ to the front.

One lap, six clicks, to go and the bell is clattering. Fumi, Fabian and Jussi hear the bell at practically the same time as the peloton – the gap is only nine seconds.

They’re washed away with 5.5kms left, and then it’s the drag race to the finish, which Cavendish blitzes with ease.

The Overall Picture
When a young man clad in yellow punched the air on top of Mont Ventoux yesterday, the overall was done and dusted. Contador took his fourth overall win at a Grand Tour, aged only 26. Astana had safely maneuvered their two-headed monster, whom we shall call LAlberto, onto the first and third steps of the podium.

In the ‘entertainment’ world, we’ve already got Brangelina and we had Bennifer, so just as a short-hand, LAlberto will cover the Lance/Contador media hybrid. If you’ve believed the hype this year, you can’t mention one without the other. 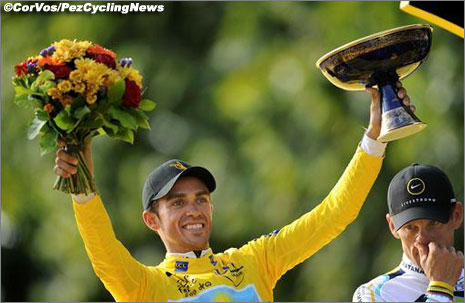 LAlberto is a complicated character, schizophrenically supporting/attacking itself, but it was still plenty strong enough to see off Schleck2 and all other pretenders. Everyone is looking forward to 2010 when Lalberto will have divided into two separate entities.

We’ll just have to wait and see if the younger identity can see off the older one again. That’s it for the 2009 Tour, but lots more to come on Pez. Don’t touch that dial.

Tour Coach: It’s All About The Green