Sunday July 20th 1969; that’s 40 years ago now but I remember it clearly as the day that I first became aware of professional bicycle racing – I was 14 years-old. I walked in to the living room of our little flat in Kirkcaldy, Scotland and glanced at the black and white TV in the corner; the evening news had just begun and the picture was of a cycling track with the stands crammed to capacity.

“What’s this?” I thought to myself; suddenly a rider banked right from out of nowhere, into the finishing straight, raised himself from the saddle and pumped at the pedals before sitting down and settling into a powerful rhythm around the concrete. The instant he appeared, the crowd went crazy, hats, programmes and whatever else was in their hands flew into the air and the chant went up; “Ed-dy! Ed-dy! Ed-dy!” I was transfixed by this tall man, sprawled along the top tube of his white bicycle; “Eddy Merckx has become the first Belgian rider for 30 years to win the Tour de France,” said the BBC announcer. 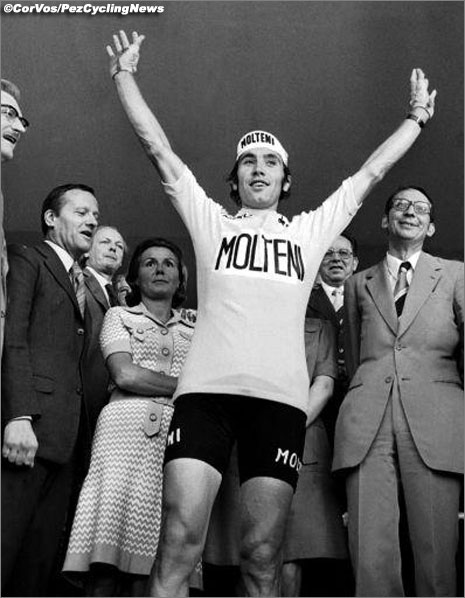 Right there, I knew there was no other sport for me. Merckx won that Tour by almost 18 minutes from the classy but eccentric Roger Pingeon (France), the man who won the ill fated1967 Tour where Tom Simpson died. This was the start of the Merckx era; six stages plus the team time trial fell to him, that year.

In 1970 he won again, this time by nearly 13 minutes from that year’s victim – Joop Zoetemelk (Holland); Eddy took eight stages and the TTT, just in case we thought that ’69 had been a fluke. 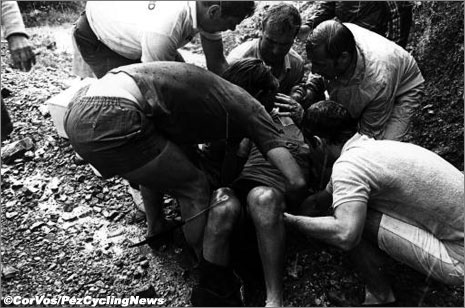 The crash that took out Ocana.

We were confirmed Merckx fans, and in 1971 it looked like our man was well on the way to his hat trick; but Luis Ocana (Spain) had other ideas. As virulent Big Ted fans we could have admiration for no other GC riders; albeit the likes of Belgians Patrick Sercu and Roger De Vlaeminck – not forgetting our own Barry Hoban – were also objects of our pagan idolatry.

But it wasn’t until I few years later, when Eddy was in his twilight and I’d actually seen Ocana race that I realised how classy the Spaniard was. He took two mountain stages on his way to prizing loose Merckx’s grip on the yellow jersey and despite Merckx’s remorseless attacks in the days that followed, it didn’t look good for us – or Eddy. 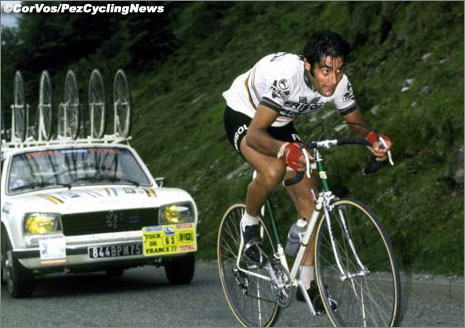 It was Mother Nature who intervened on the Belgian’s behalf; Ocana crashed in a thunderstorm on the descent of the Col de Mente, his brakes rendered useless by rivers of mud washing off the mountain. Eventual second overall, Joop Zoetemelk cannoned into the Spaniard as he lay on the tarmac – and the dream was over. We consoled ourselves that Eddy would have attacked to the end and Ocana would have cracked, eventually (maybe!). 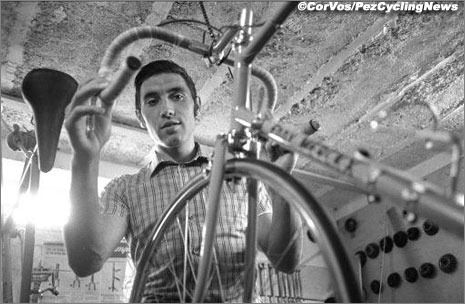 Eddy made it four in 1972 with Ocana going out due to a lung infection, despite having been in top form, confirmed by wins in the Dauphine and Spanish championships. The closest that runner up Felice Gimondi – Tour winner in 1965 – could get to Eddy, was 10 minutes.

With Merckx completing a Vuelta (it was in the Spring back then) and Giro double in 1973 he ‘passed’ on le Tour, leaving the road clear for Ocana to take six stages and the GC by 15 minutes from Bernard Thevenet (France).

And if you think that the pursuit of excellence and light weight in bicycles is a new phenomenon, be aware that Ocana rode a British made Speedwell titanium frame to victory. 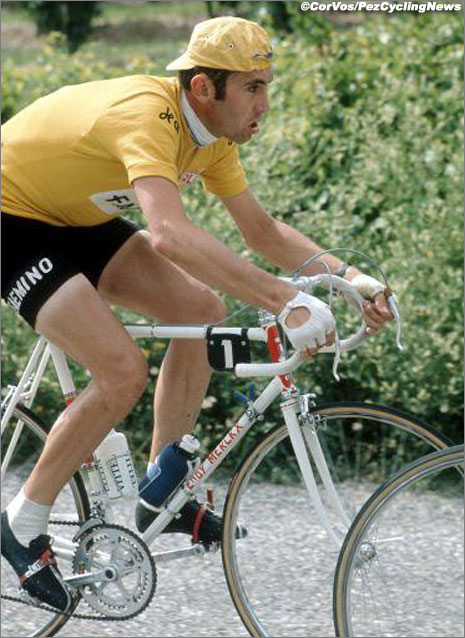 No one has spent more time in yellow than Eddy Merckx.

The following year, 1974, Eddy returned; eight stages and the GC by the same number of minutes from Raymond Poulidor (France) confirmed that he was back in business.

The Merckx era ended on stage 15 of the 1975 Tour de France when genial Frenchman Bernard Thevenet caught and dropped the Master on the climb to Pra Loup. A crazy fan’s hard punch to the Belgians kidney on the Puy de Dome stage hadn’t helped Eddy’s condition and there was speculation that the medication he took to ease the pain played a part in his collapse. 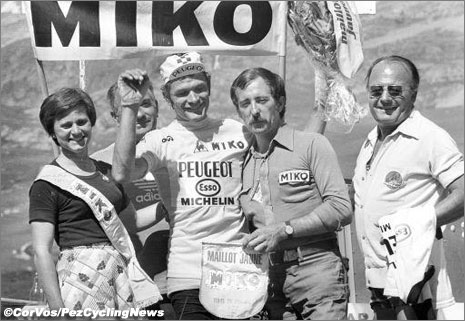 An ‘on cam’ Merckx might have pulled it back, but a crash at the start of stage 17 left him with a broken jaw, unable to ingest solid food. A lesser man would have gone home; but he wasn’t a lesser man – he was Eddy Merckx. That was the Tour where the French finally learned to love le Cannibal, as he refused to retire and devalue Thevenet’s win.

Interviewed before the start of the ceremonial last stage into Paris and asked if he would attack Thevenet, he replied; “yes of course!” but added with a wry smile; “but just a little.”

Never again would I admire a rider as much as I admired Eddy. 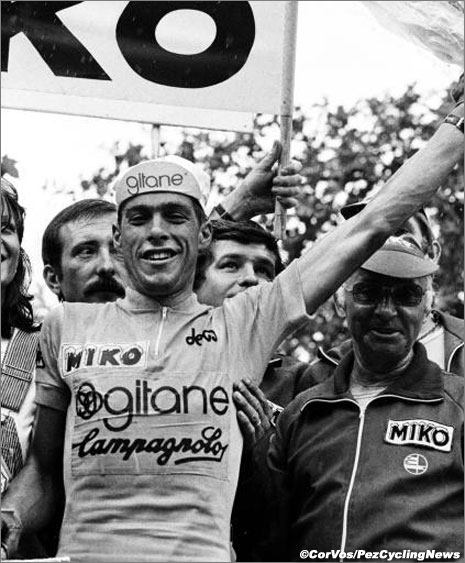 It was the year of the long hot summer in 1976; Merckx didn’t start, Thevenet went out with illness, Maertens was rampant with eight stage wins but tiny Belgian Lucien Van Impe climbed to glory – it would be more than 20 years before another ‘pure’ climber sampled the best view in Paris. 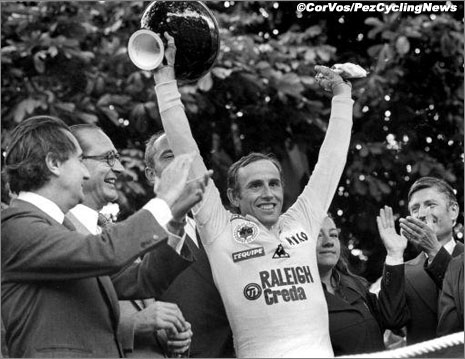 …And Zoetemelk was second again.

Van Impe might have won for a second time in ’77 but for a badly timed crash and it was Thevenet who again topped the podium ahead of Hennie Kuiper (Holland), amid rumours of yellow jerseyed riders failing dope tests and the organisers covering it up; the Tour couldn’t have such scandals – if only they’d had a crystal ball.

Thevenet would tell me years later that he owed his win to that rare thing; a mistake by Kuiper’s Raleigh manager, Peter Post who kept the team riding in support of German ‘Golden Boy’ Dietrich Thurau, who won the prologue and held the jersey for the first 15 stages, but was never going to conquer the high mountains.

If Post had burned out less Raleigh candles in support of ‘Didi’ and thought more about the Dutchman, it might well have been a different ending. 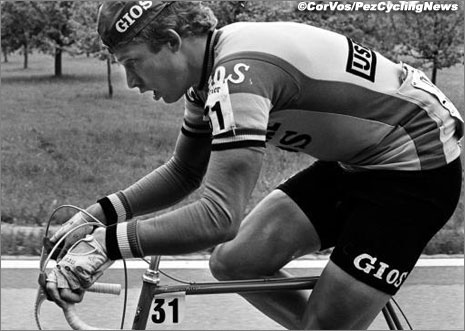 We first heard of Bernard Hinault in 1977 when he won Liege – Bastogne – Liege and Gent – Wevelgem.

It was the ‘D word’ that propelled Hinault in the direction of yellow; Belgium’s Michel Pollentier (who still manages amateur teams in Belgium) was caught trying to beat the testers at the top of l’Alpe d’Huez with a piece of rubber tube and a flask of ‘clean’ urine – crazy, but true! 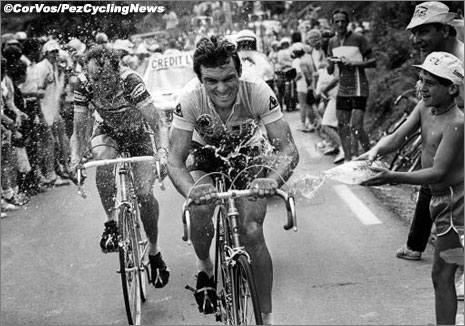 The one and only, Bernard Hinault.

The Belgian headed home, Zoetemelk pulled on the maillot jaune but Hinault blasted the field in the 72 K chrono a few days later to run out winner in Paris by just under four minutes from Zoetemelk.

The last Tour of the 70’s also went to ‘le blaireau’ – ‘the badger’ as he was now known (the French habit of nicknaming every single rider is one of the few things that I dislike about our wonderful sport) won seven stages, including the last one, on the Champs Elysees with Zoetemelk again second.

And if you’re a ‘techie’ – this was the first year of the seven speed freewheel.

Talk to you tomorrow.