Roadside Wrap: That’s Post Grand Tour Stress Disorder. The Champs Elysйes stage of le Tour is the climax, the culmination of a near month long adventure around Europe. The riders and staff have a huge party in the plush Meridien Hotel; whilst the journos slip into the lift down to underground car park and realise that they can’t put off gutting out the hire car any longer.

There’s no ‘bash;’ for us it was a damp hotel room and a plate of spaghetti, one glass of wine is about all you can manage before all the miles, words, emails and angles catch up with you.

The next morning, there’s no schedule, no need to hang creds round your neck – jeez, what’s the point of going on?

In Belgium, there’s a cure – head straight for a kermesse, dose up on frites and pils; that works every time.

In Paris, there are no kermesses; but it is one of the most beautiful cities in the world. 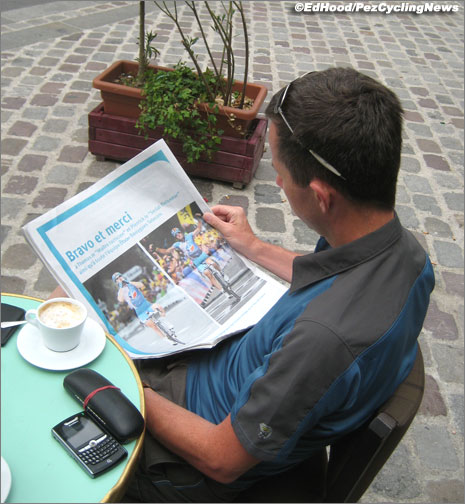 In no time, we’re outside a cafe in Montmartre with L’Equipe and a four euro coffee in front of us. 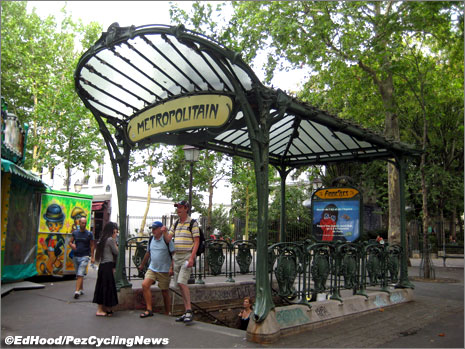 The view down the street is stunning, there’s the gold dome of Les Invalides. 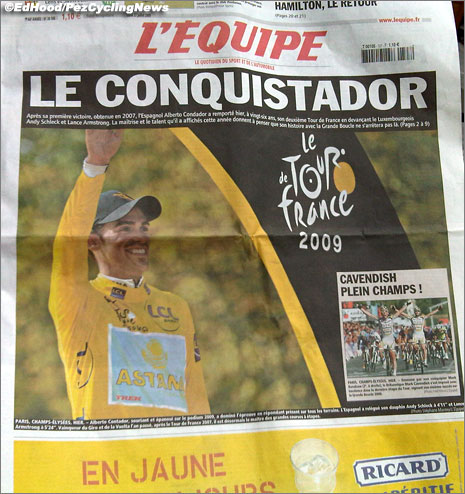 “Conquistador” says the headline in L’Equipe.

The paper is full of great pieces; a blow by blow accounting of the shenanigans at Astana.

But maybe they didn’t go back far enough – the seeds of dissatisfaction were sewn back at the 2008 Vuelta when Armstrong announced his comeback, during the race. Bad timing in Contador’s eyes; diverting media attention from the Spaniard’s home Tour and his completing the majestic Giro/Tour/Vuelta treble. And when it became apparent that Johan Bruyneel had cut a deal with the American before Alberto had signed his new contract, the trust was gone.

On the subject of stolen glory, the cartoon in L’Equipe shows the yellow, green and polka dot jerseys on the podium; but the shadow of a giant plane steals the sun away from them; “ARMSTRONG TEAM” is written across the shadow.

And the biggest winners? Astana, on 697,050 euros – not tennis or golf prize money, but not bad nonetheless!

A shower of rain disturbs our idyll, we pop inside until it passes; “cafй au lait, encore, s’I’ll vous plait?” – 16 euros for two coffees each, ah, what the hell, we aren’t well men! 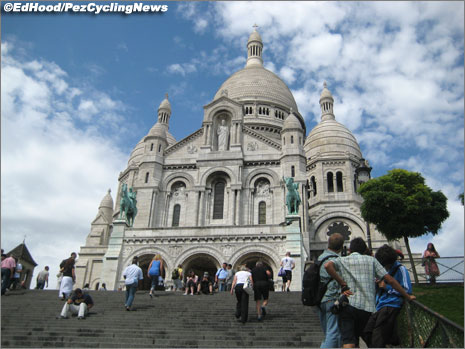 Time to move on, up the Basilica of the Sacre Couer, the Sacred Heart. It’s a tad ‘Tourist Hellish” up here, but beautiful nonetheless. The church stands atop the highest hill in Paris; the views are wonderful. 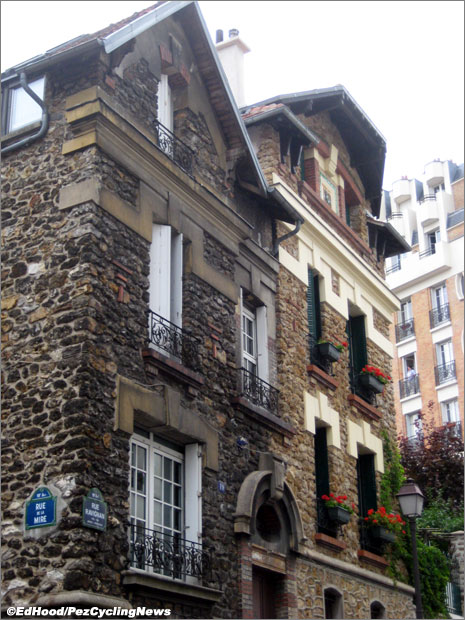 Just yards away are the gardens, where you can enjoy your sandwich in peace. 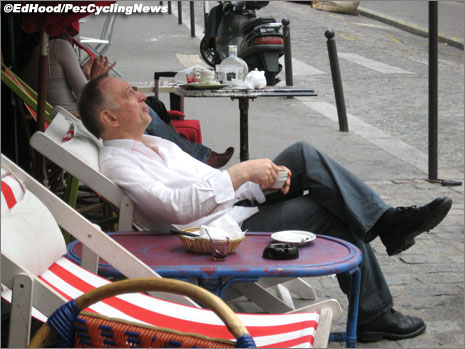 Steps run down in all directions from the hill top; there’s the rain, best find a cafй. 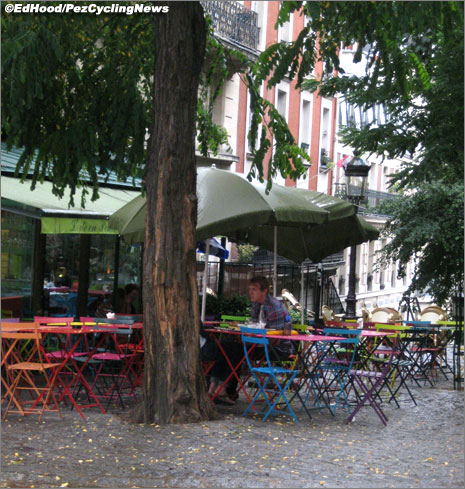 We sit the shower out with red wine and coffee, watching the pretty Parisien girls come and go. 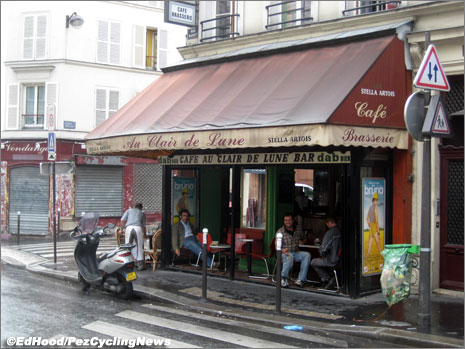 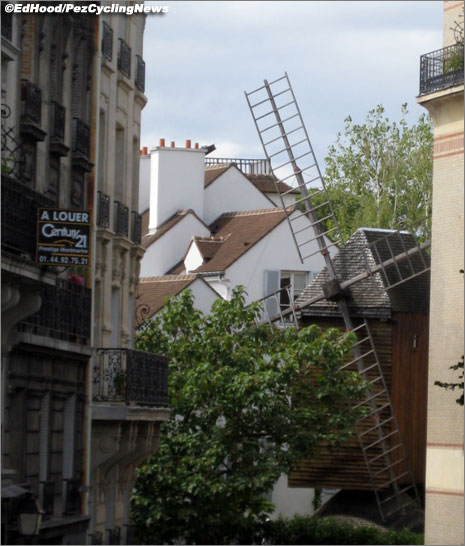 We track down the last windmill on the hill, there used to be 40. 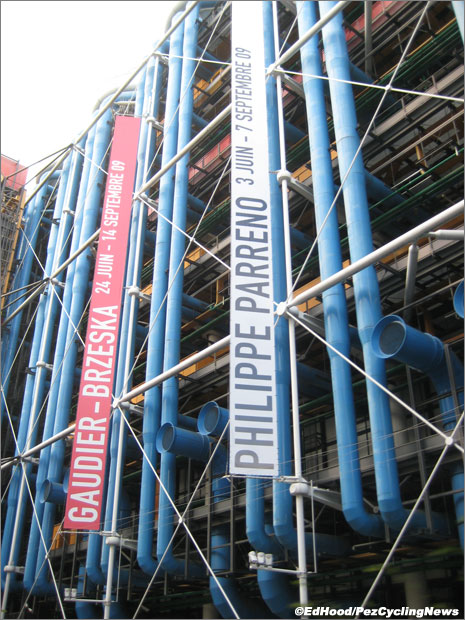 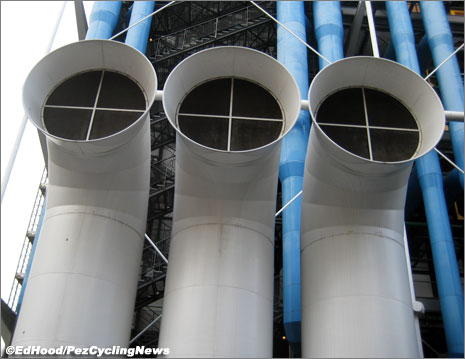 Time to change venues; past the Beaubourg, this huge multi coloured, futuristic museum and art centre was initially loathed, but is now as much a part of Paris as the Eifel tower. Architects, Rogers and Piano placed all the services on the outside of the building to leave huge, uninterrupted internal spaces – it’s cool. 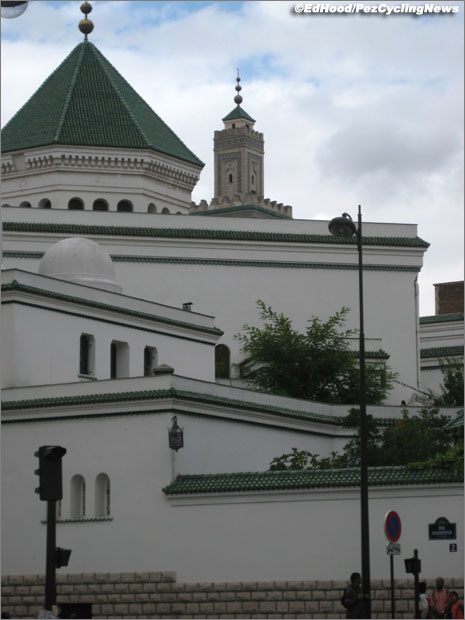 Talking of ‘cool’ we head down to the Latin Quarter to have a sweet, hot, tea at the Cafe de la Mosque. Tiles, canopies, North African music – different, relaxing.

There are still a few more places to go, before the Ryanair punishment flight home. 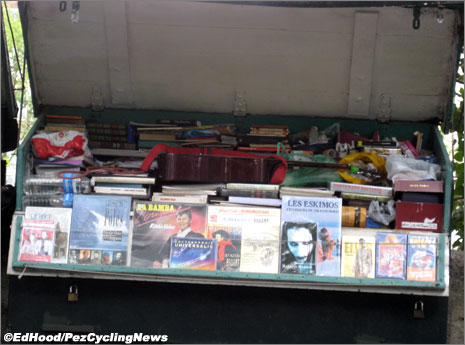 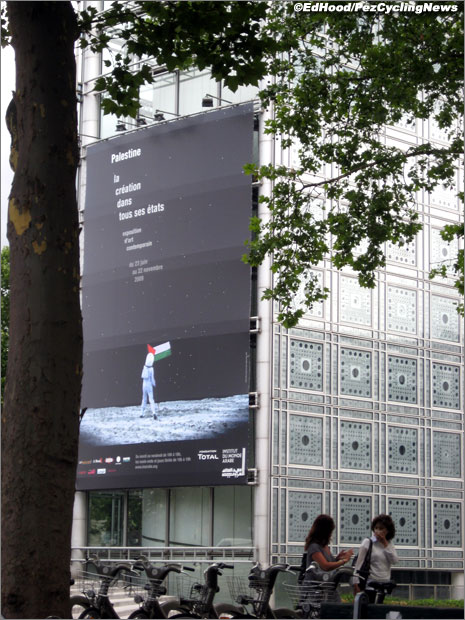 Along the Seine, past the second hand book stalls and the Institut du Monde Arabe with it’s light sensitive “iris” glazing, which shut down as the sun gets brighter. 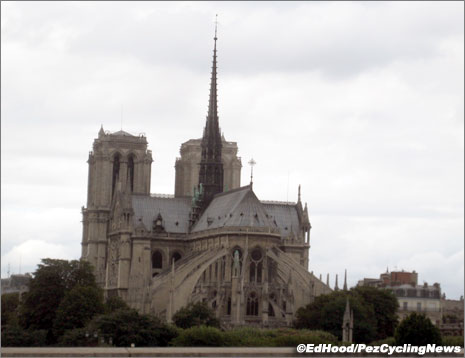 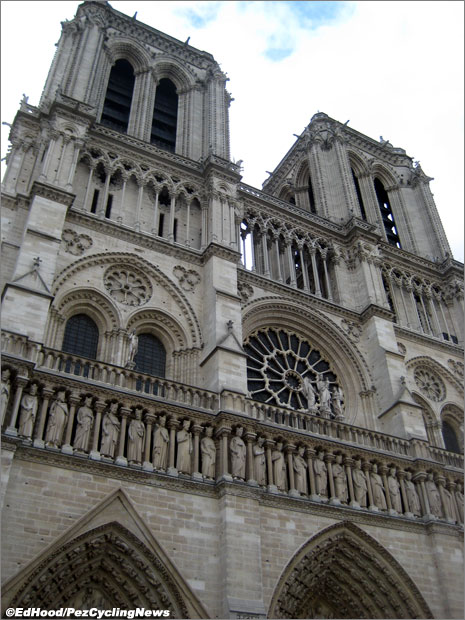 We pass the towering flying buttresses of Notre Dame Cathedral, abandon the car, pass the huge queues to enter the cathedral and head for the quiet end of the island. 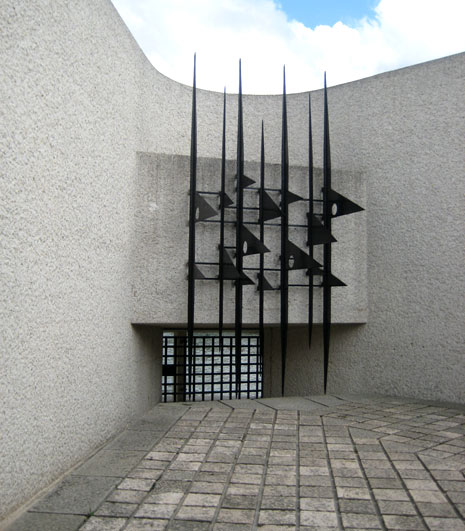 There’s a special place here that I’ve wanted to visit for years; The Memorial to the Victims of the Deportation.

Down a narrow staircase, with high rough concrete walls on both sides, into a courtyard, with one low level, barred window to give a glimpse of the Seine.

Venture in through the door in the concrete wall on the opposite side of the courtyard and there’s a chamber, a barred corridor stretches to the chamber into the bowels of the island.

There are little twinkling lights lining the corridor, tens of thousands of them. Each light represents a human being, there are 160,000 of them, one for every person who was deported from France, never to return, by the Nazis and their puppet French regime – installed after the French surrender in World War II – The Vichy Government.

Quotations by poets and philosophers are carved into the hewn concrete; “Forgive but do not forget,” says one.

It’s hard to believe, but there’s a very real connection between cycling and the events this quiet, powerful place commemorates.

Up until 1959, when it was destroyed by fire, Paris was home to the famous Vel d’Hiver (or d’Hiv) – the Winter Track.

The Paris six days were held here and it was a place to be seen for the glamorous set; Hemingway writes about it in his works.

During the Second World War, the track was used as a holding area for unfortunates on their way to the Nazi concentration camps. Some 13,000 people were crammed into the track and held for eight days in hellish conditions.

A spot to remind you how lucky you are and to stop feeling sorry for yourself.

Just one more port of call, before the drive north to the world’s worst managed airport – Beauvais. 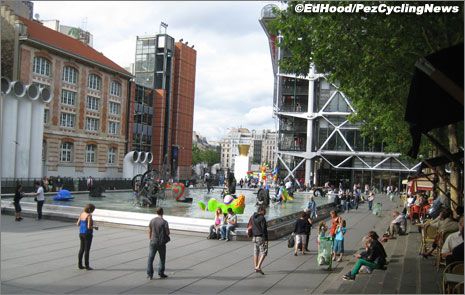 Back to the Beaubourg for a crepe, a glass of cidre and to think about next year’s Tour. 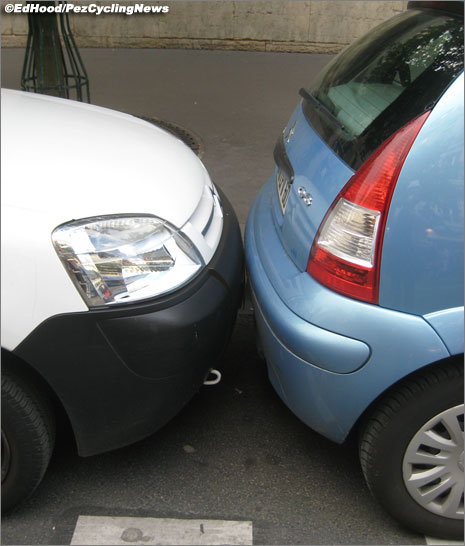