Roadside:After what seems like a 10month build up, we saw the riders out on the course for the first time today. After a quick look at what the course had to offer we then did a meet and greet with some of the faces that will surely dominate the next three weeks of racing. It was day “T Minus One” in the heart of Rotterdam and Pez was there for the inside scoop.

The opening days of the 97th Tour de France are centred around the port city of Rotterdam in the Netherlands. Having driven straight in and done our work yesterday, waking up and hitting the road this morning was a whole other ball game. Late on Wednesday evening, the prologue course was closed completetly to traffic and with our accommodation 100m outside the looping top section of the course formed by the Erasmusbrug and Willemsbrug, we found ourselves stuck inside the closure on a day when we needed to visit four different team hotels at various points in the city. This was going to be a challenge. 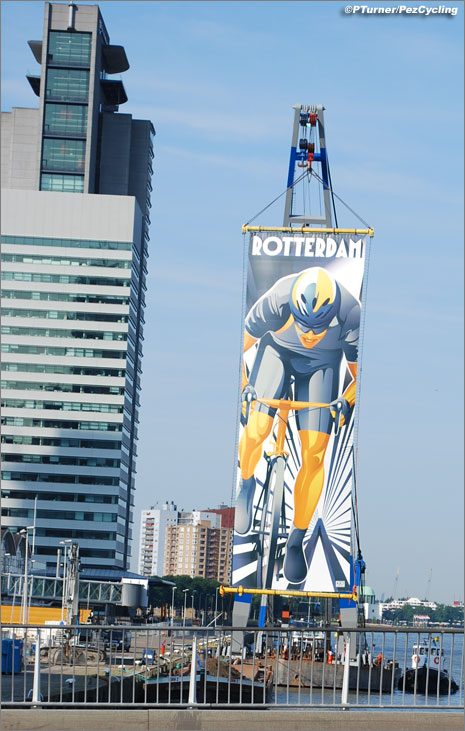 A Touch Of Sightseeing
The first order of the day was to climb ashore and explore the local area.

With 421million metric tons of cargo moving through the port annually, the main shipping thoroughfares need to be kept moving with the traffic that goes along with a population of 590,000 people. Later in the day we found ourselves stopped in traffic as the roadway lifted into the air to allow a smaller ship to pass through, but in this area of the port, it is up and over to keep things moving. 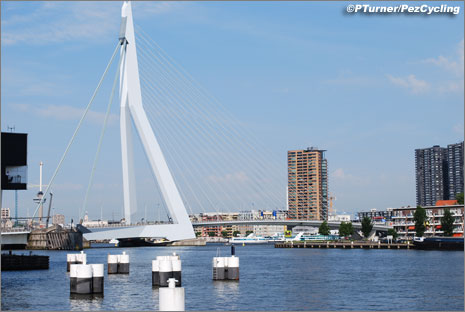 As well as numerous lead-up events that are all to use the prologue course before Saturday evening’s race, the 192 riders who race the course were given the opportunity on Friday to do some course reconnaissance on closed roads.

With the small number of spectators – in comparison to what is expected on Saturday – we were able to see the riders up close as they worked on their lines through the corners. 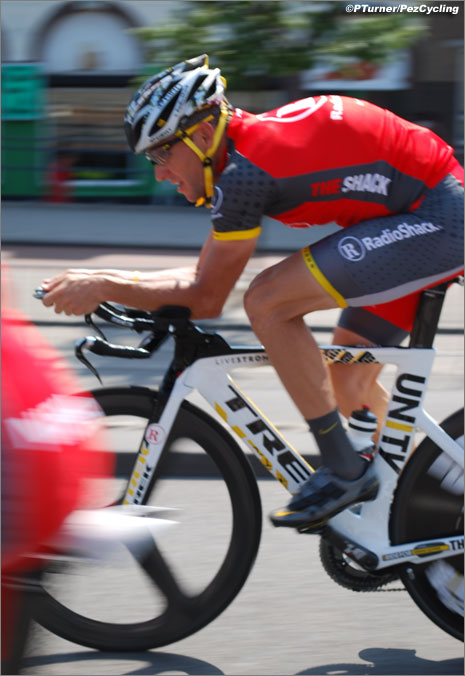 Armstrong rode the first lap of the course with an escort from four police motorbikes, but by the time he came around again, he was by himself and concentrating on his race line.

Team Sky’s British GC contender Bradley Wiggins (who will start early tomorrow as just the 41st rider away) was either worried about sunburn or still trying to sweat those final few grams down to his racing weight, as he rode past in long sleeves and leggings on what was one of the hottest days in Rotterdam so far this year. 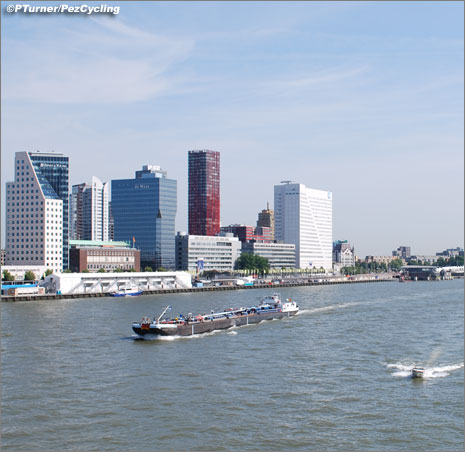 Robbie McEwen was taking the warm weather a little more seriously and had a sleeveless jersey on to make the most of the sun ahead of tomorrows forecast wet weather.

Also out on the course were the Team Columbia HTC squad and as Mark Cavendish sped past on his Plasma time trial bike, we headed back to grab the car to head to their press event where they would also be unveiling the new Scott road bike they would be riding this year. 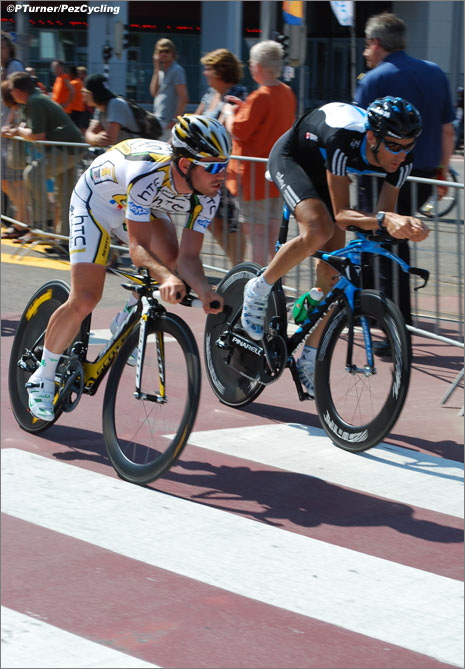 To The Press Room
My post at the press room just happened to be right in front of the thoroughfare to where the teams’ presentations were taking place. While this allowed me to see a lot of the coming and going, it also meant that I wasn’t getting a lot of work done (I think if I was forced to write a school report on myself, the phrase “Matthew is easily distracted” would get a regular run).

As the FDJ squad made their way past to do their duty with the press, I had a quick chat to the only non French rider on the team, Wes Sulzberger. He was duly told to ‘hurry up and get in there’ so I tore myself away from the laptop and went in to grab a few pics.

What I hadn’t noticed as the riders walked past, was that they were all wearing different jerseys. 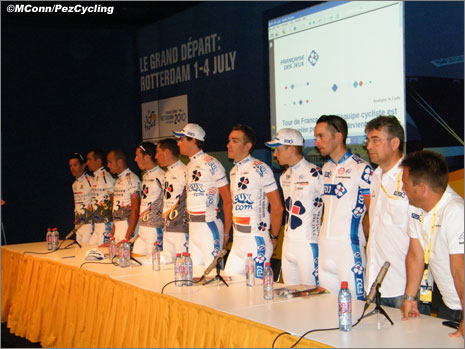 With the French national lottery recently announcing that they were extending their sponsorship of Marc Madiot’s team beyond the end of this season, the riders marked the unveiling of a new team jersey for the Tour de France by showing off the succession of jersey designs from the team’s first year to the present day.

After taking a few pictures, I headed back to work, but it wasn’t long before Wes, who had given the post press conference Q&A session the slip, was back beside me. It seems that with an almost 100% French presence at the press conference, no one was interested in what the team’s only non-French rider had to say so he was left with nothing to do and no one to talk to. 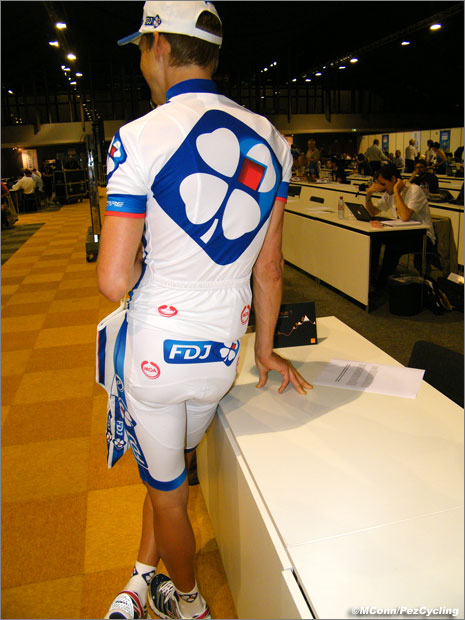 Our chat did reveal a few details (mostly about Flowery Gully and other catch-up chit chat) but Wes did talk a bit about his form leading into the race and what he has been doing to prepare, and I think it would be a fair thing to say, keep your eye on this man over the next three weeks.

HTC Columbia
The purpose of our visit to the press centre today was to catch up with Team HTC Columbia and to take a look at the new bike they would be racing at the Tour this year. I had been to the Giro launch last year when they unveiled their new Plasma time trial bike and had seen first hand not only how Bob Stapleton knows how to put on a show, but also how serious the team takes their relationships with their technical partners.

While getting in early had meant a seat up front, it also meant I hadn’t realised just how many journos there were who had also come to see (and hear) what Mark Cavendish, the team’s green jersey contender, had to say.

With the help of Phil Liggett and Paul Sherwin, team owner Bob Stapleton spoke about some new partnerships that had been announced this week including the arrival of both Google and Skype as technology partners as well as the reasons he felt helped make his team so successful. 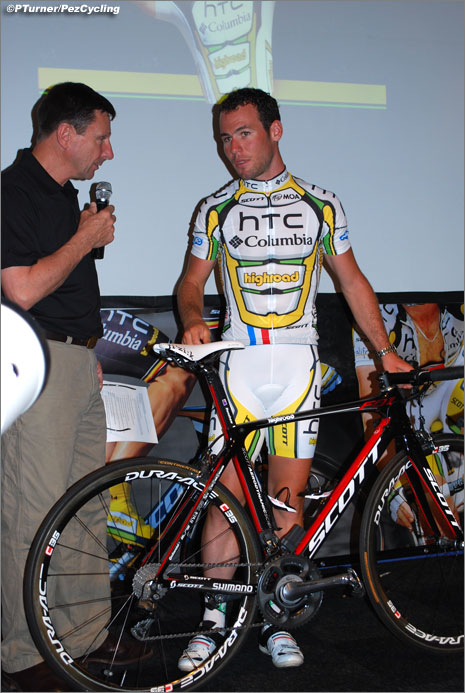 “We see success as taking three key ingredients. The first being the people in the team. We have an exciting group who are committed to being successful,” Stapleton explained to the packed press room and the worldwide audience watching live on the teams internet feed.

“The second part is having great partners, each of whom are market leaders in their field or are directly related to the cycling industry. And, the third factor is the passion that our people and partners have for the sport.” It’s hard to argue with the man at the helm of what is the cycling world’s “winningest” team. 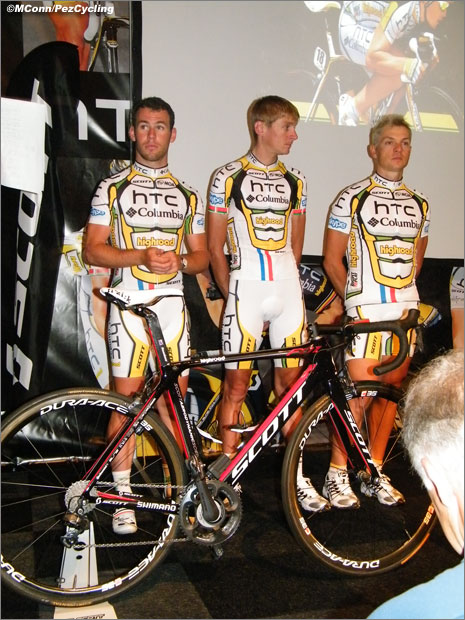 When Cavendish rode out onto the stage he was on top of the new Project F01 road bike which is the company’s new flagship model that all riders will be on at the Tour de France.

“A big part of our success,” Stapleton continued, “is the quality of our partners and one company that we have had a great relationship with for the past 3 years in Scott. Our job is to ensure our athletes have the best tools and support that is available and now Scott have been able to produce what we believe is another winning bike.” 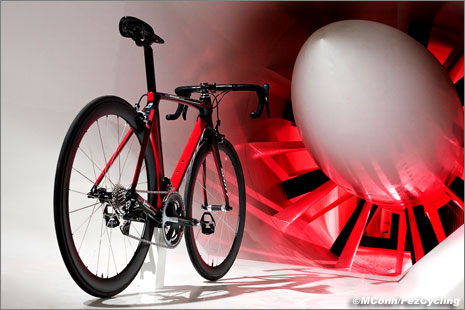 The F01 has undergone extensive wind tunnel testing at the Mercedes Benz Formula One team wind tunnel in the UK and the company have optimised their results to make the bike as aero as possible by using a mannequin on the bike, rather than just developing the frame itself in isolation. After all, it is the combination of rider and machine that needs to cut through the air on race day and not just a bike rolling down the road by itself. 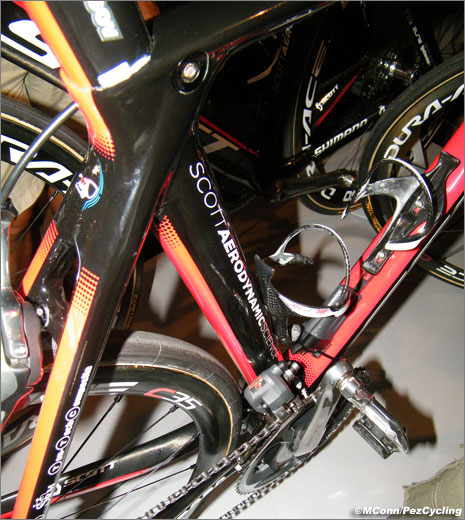 The seat tube cross section has also been changed quite radically to improve aerodynamics and also meet the UCI’s requirements in terms of the ratio of the two different cross sections. The Addict seat tube, which was round has a ratio of 1:1, the Plasma tube is bladed and has a ratio of 1:3 and the new Project F01 tube was designed to have a ratio of 3:2. The tube was designed as a long bladed shape with a ratio resembling around 3:5 and then the trailing section was removed to give an almost rounded trailing edge that maintains the aero qualities of the (now) imaginary blade.

What The Riders Think
The riders on the team are heavily involved in the testing or race prototypes and one of the key areas of the Project was to combine stiffness, weight and aerodynamics. 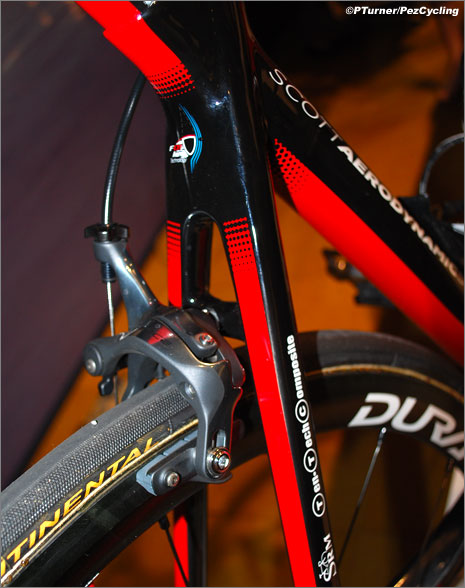 Mark Cavendish summed up the process from a rider’s point of view, saying “Its incredible, we’ve tested it out. For me, it’s always going to be a compromise with aero to get the right stiffness. I give all my suppliers quite a lot of s#!+ about making products as stiff as possible and Scott have been able to do it here.”

Mark Renshaw agreed with the man who he would be leading out in the sprints, trying to emulate the success of last year, saying all of the riding they had been doing on the bike showed that it really was an improvement over the Addict and they were really happy to be racing on the finished product this week. 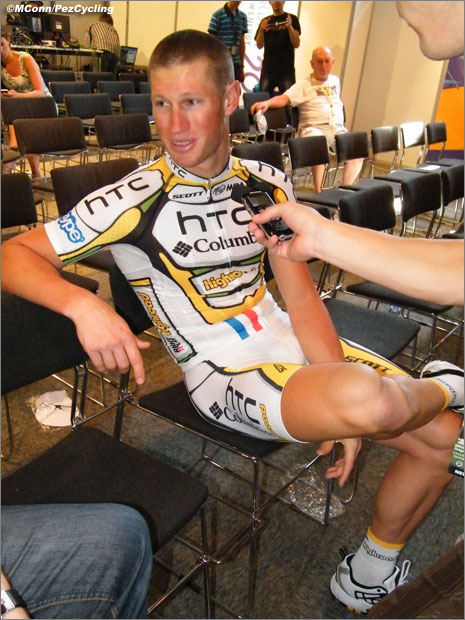 The numbers provided by Scott show that the Project F01 had met their target of a 20% saving in drag, which represents 60watts lost for 300watts of power generated, just due to the drag of a conventional bike. This 20% saving on bike drag then translates into an overall saving of 4-5% on flat ground.

In terms of stiffness and weight, the other two components of the development target, the F01 as achieved the same stiffness as the less aero Addict with only a 5% increase in weight over the previous top end road model from Scott. Despite this increase, Scott’s in-house measuring still puts their frameset ahead of most of their major ProTeam supplier competitors with a frame only weight coming in at 840g. 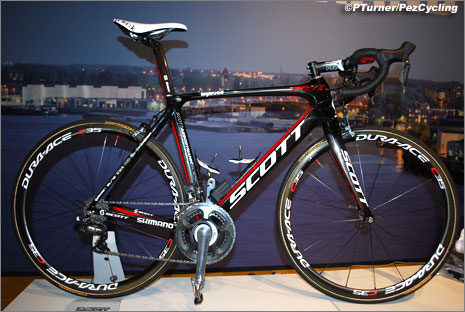 What Scott wanted was to design a bike that met the needs of all of the different demands of bike racing. Looking at how the HTC Columbia team in 2010 will be targeting both the GC (requiring an aero bike that is light to climb on) and the sprints competition (needing a bike that is stiff, stiff and stiff) the company have been able to supply a single frameset that meets or exceeds all of these demands. It won’t be long to see how their top class team of athletes put it to use.

So with the final Pre-Tour day done, the start list has been published and Iban Mayo will be the first man on the start ramp at 4.15 and Alberto Contador will be the last when the clock hits 7.32pm. Rotterdam is ready to for the Tour and I can tell you that the Pez Team here can’t wait to get out there among the crowd to bring you the roadside action of the opening day of the biggest bike race on the planet.