Race Report: Stage 16 featured all the big names of the Pyrenees – Peyresourde, Col d’Aspin, Tourmalet (which they’ll climb again on Thursday), the Soulour and the Aubisque, and the climbing started from kilometer one. Lance showed his intentions early by joining the day’s big break, and stayed in the hunt until game time, throwing his best at the road and his escape mates on the slopes of the Soulour, hoping to go out on one last blaze of glory.

It was flashes of the Lance of old, but one thing had changed, this time his attacks were answered – first by a very strong Carlos Barredo (QS) – this time using his legs and not his fists to do the talking, and then by Bbox’s Pierrick Fedrigo who also looked very strong. It was an exciting stage – but not because of the gc – this one played out much like a transition day with the breakaway providing all the action.

With the favorites maybe waiting for Thursday to settle the score, a breakaway was loosed up the road, containing none other than Lance Armstrong making his final bid to win a stage.

The Peyresourde was first to tickle the legs of the group, and it was here that some riders saw a chance for a breakaway, and others, like World Champ Cadel Evans, were already in big trouble. The upstart Belgian Jurgen Van den Broeck made a daring attack in an attempt to bridge to an early break, but it was reeled in. No one was letting him go, as consistently as he’s been riding and holding the 5th spot on GC. 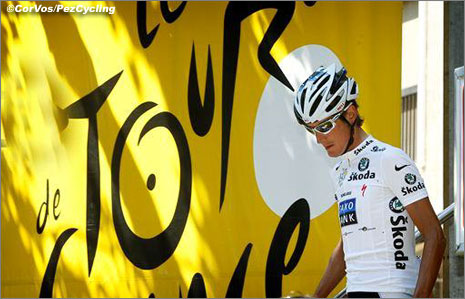 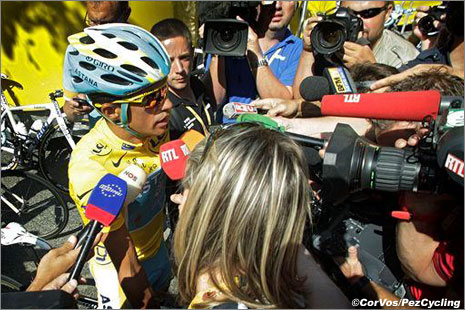 After yesterday’s insane amount of drama, today’s finish coming some 50+km from the top of the last climb, and with a rest day tomorrow, the stage was set for a break to get away. Surely the overall favorites were thinking of trying to conserve as much as possible going into the rest day and with the summit finish Tourmalet looming on Thursday. A huge group of 15 swelled off the front, containing Horner and Armstrong of Radioshack, and they rolled up the Peyresourde together.

Then it was up the Aspin, where an oddly timed Cunego attack was short lived. The group worked well until it began to splinter up, and Anthony Charteau was first over the summit, adding another pile of points for his Polka Dot jersey. Everything mostly came together on the descent and the deck was reshuffled.

The ride up the Tourmalet was next, where Sandy Casar, Lance Armstrong, and Pierrick Fedrigo took off from the front and the group wasn’t too concerned with chasing them. Slowly Christophe Moreau (Caisse d’Epargne), Damiano Cunego (Lampre), Pierrick Fedrigo (Bbox) and Jurgen Van de Walle (Quick Step) also made their way across to them. By the top the group of 6 after some stretching had 3 minutes over the peloton. Another trio bridged up, and that made your break of the day. Those boys were Christopher Horner (RadioShack), Carlos Barredo (QuickStep) and Ruben Plaza (Caisse d’Epargne). And the earlier pace had put a lot of riders in difficulty, but the power was switched off for the main group so a lot of riders were able to latch back on. I can’t imagine the elation of those riders! 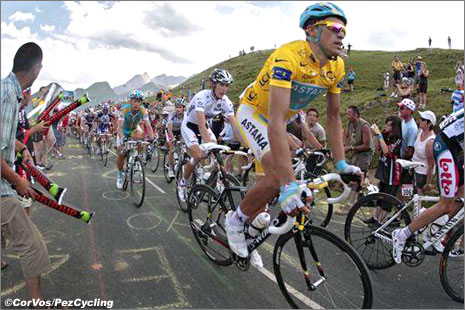 Then came the Col du Aubisque and the breakaway had built a little over 6 minutes of a lead. Halfway up the climb Armstrong attacked and Barredo joined immediately, which upset the group’s rhythm. Armstrong kept the pressure on, and the group fractured, recovered, reshuffled. Lance seemed to be lighting the matches at an alarming rate considering it was having little effect at burning off his escapemates.

Behind, Astana controlled the peloton some minutes back. Up the final few k’s to the summit and Christophe Moreau was making sure his last tour was a good one and he took the honors over the top. It wasn’t enough to the KOM jersey, but it was close, and left him just 15 points behind KOM Anthomy Charteau with just one big climbing day left. Casar, who was distanced on the final bits of the climb regained contact on the initial descent. 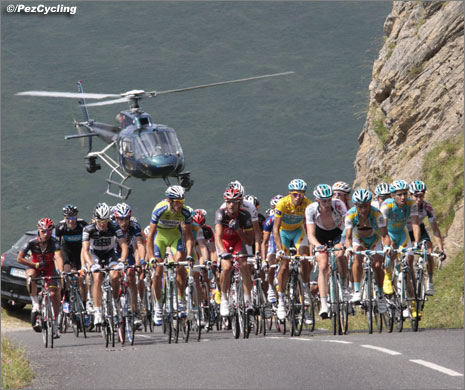 Carlos Barredo of Quick Step had made his move a bit earlier just after descending the Aubisque and was in his Time Trial mode to hold off the chasing group – but with still over 40km to go. Christophe Moreau (Caisse d’Epargne), Pierrick Fedrigo (Bbox), Lance Armstrong (RadioShack), Damiano Cunego (Lampre), Ruben Plaza (Casse d’Epargne), Christopher Horner (RadioShack), Jurgen Van De Walle (QuickStep), and Sandy Casar (FdJ), gave up about 40 seconds to the Spaniard before setting a tempo and locking in the advantage.

Barredo did have his teammate De Walle in the chasing group, so he was just sitting on, waiting for his moment to maybe make his own jump if he got caught. A few k’s later and the chase had cut the lead in half – it was just 28 seconds. A valiant effort as Barredo was clearly “all in” on this move. The peloton would not see these lads until after the showers, and they were riding a good 9 minutes plus behind of the leader. 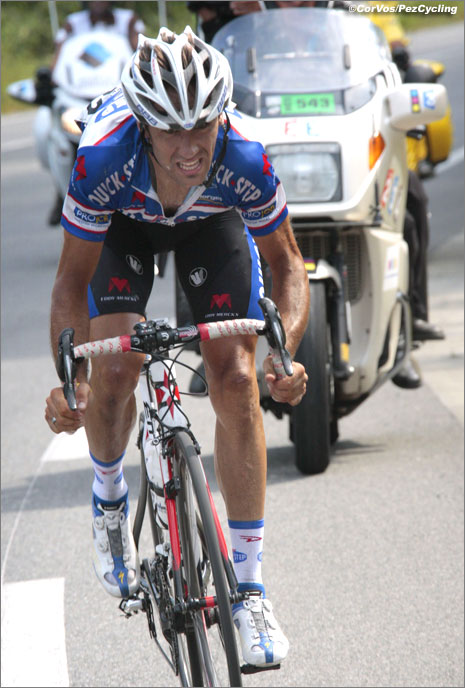 At 15km to go, just 17 seconds separated the Spaniard from the chasers.

Back in the main field, the riders concerned about their positions in the top ten began to ride hard to lessen the time gap to the group up front. 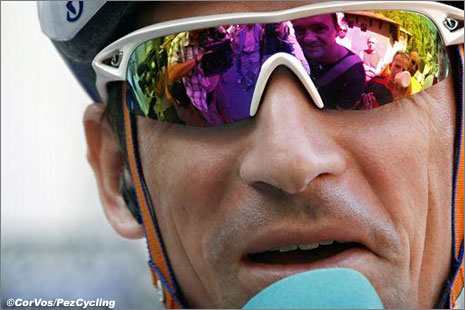 Barredo dangled, the chasers kept him on a string, and 21 seconds separated the two at 6km left. By 4km, Barredo had pushed it up to 31 seconds. By 2km, it was down to 11 seconds. It was some exciting stuff in the town of Pau. Moreau and Horner were slaying themselves to bring the Spaniard back, and they reeled him in just at the 1km to go banner. Chapeau, Barredo. Moreau led out Plaza, as the others jockeyed behind. Armstrong waited and waited and launched what you could call a sprint a little early but he just didn’t have the pop. He sat up, and so did his last chance at a stage win. The full sprint opened up and Pierrick Fedrigo made the most of the inside line and overtook Plaza to take the sprint win. France’s third stage win on the fly – you might call it “bonne mйtier”. 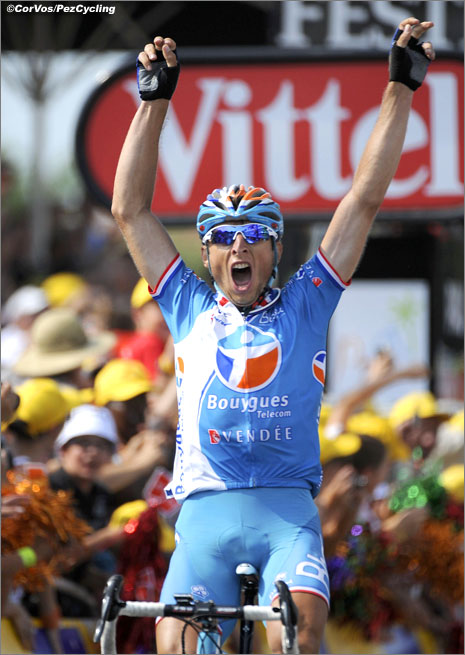 • Cadel Update from BMC: Everything Is Sore
Evans finished 81st, in a group 23:42 behind stage winner Pierrick Fedrigo (BBox-Bouygues Telecom), who won from a nine-man breakaway. The world champion said the uphill start to the 199-kilometer race was too much. “I haven’t got the legs, but I would have like to have done something today,” Evans said. “When it’s uphill like this – and after the days we’ve had and the racing we’ve had in the last few stages – it’s put a lot of people in a lot of difficulty. It’s one thing to have a sore arm. But then when you get a sore back and a sore this, or a sore that, and you can only pull on one side – that’s all part of it.”

• Damiano Cunego from Lampre: “Evaluating my performance, I would like to begin underlining the good thing: I’m proud to be able to battle with strong will every time that there’s the chance to try to realize something that could allow me to win a stage and to give the fans emotions – Cunego commented after the race – Unluckily, today again not always went in a perfect way, since I lost the chance to win in the final sprint. My energies were not at the top, but neither the ones of my opponents, the problem was that I could not find the proper position to start the sprint and so I could not compete for the victory. My will doesn’t change, I’ll try to be protagonist every time there will be the chance”.

• Thor Hushovd (NOR): “It was an important day. I knew it was a good chance to try to get some more points. The team did a great job helping me get over the climbs. With the break up the road, we knew there were some points waiting at the finish line. It’s important to take many whenever you have the opportunity. Petacchi is the most dangerous rival. I am feeling better as this Tour goes along. I think I have a good chance to win another stage. I would love to win on the Champs-Elysйes. The green jersey always comes down to who is the strongest rider over three weeks.”

• Carlos Sastre (ESP): “I was looking again for the breakaway, like always. We went to the maximum, but it didn’t work out. We went over two climbs, but the gap was hovering around 25-30 seconds, and no one really took enough digs to make a real difference. Finally, I decided to stop because I realized it would be difficult to stay away.”

Tour de Pez: A Lovely Jaunt Through The Pyrenees