It’s not all just business, work, and deadlines when PEZ descends upon Paris for the Tour Presentation. Ed Hood and his lovely lady, Marlene, took some time out of a tight bike-centric schedule to enjoy the City of Lights.

The picture in L’Equipe, with Lance and Alberto shaking hands, says it all. Lance is caught of guard, it’s not quite the poker face, but it’s close – Alberto’s face is smiling, it’s a kind of a; ‘I beat you this year, amigo and I’ll beat you next year, too !’ smile. I think perhaps the thing that bugs Lance most about Alberto is that the little Spaniard seems immune to the Texan’s psychological warfare. It’s easy to forget that Alberto was close to death; the footage of his horrific crash crops up regularly on Spanish TV. Bike racing is important, sure, but so is just being here ! 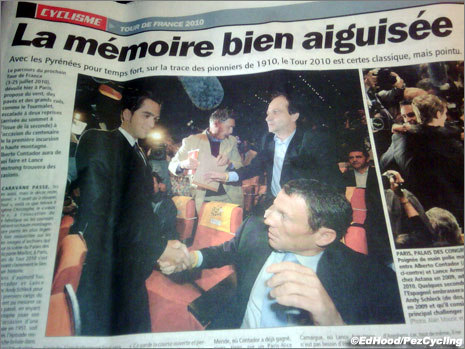 It’s the day after the 2010 team presentation and we’re installed in Cafe de Flore, Boulevard Saint Germain, with a kir for me and a cup of tea and a ‘tarte pomme,’ for Marlene. 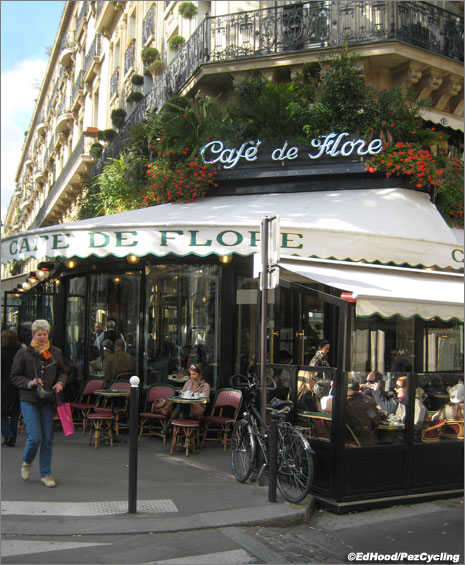 As a tea perfectionist (‘tea Jenny,’ we say in Scotland), Marlene has just uttered that oft repeated phrase; ‘the French might make fine wines – but they can’t make a decent pot of tea!’ Ah well, it’s not as if it was expensive; just 22 euros for a cup of tea, kir, and a piece of tart – that would be six or seven euros in a Belgian caff.

The thing is that you’re not just paying for the food and drink, you’re paying for the address, the white clad waiters, the surroundings and the fact that Hemingway probably sat at this table, once. “Paris is a moveable feast,” said Ernest – meaning that the memories you gather in Paris remain with you, wherever you go, all of your life. 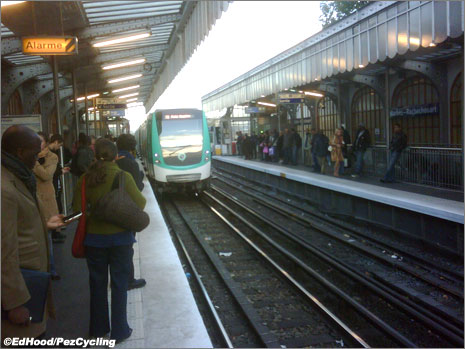 We flew in on Tuesday: up at 2:00 am, drive across Scotland, Ryanair punishment flight (that company doesn’t have customers, it has victims) to Beauvais; airport bus to the Porte Maillot in Paris, Metro – just one change of line – and we were there. 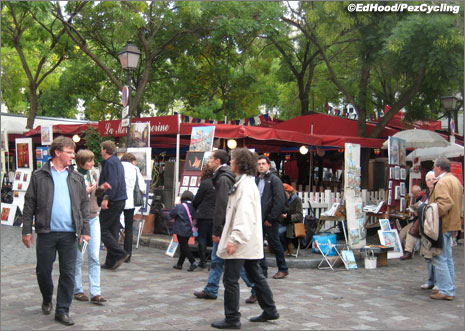 The foot of Montmartre in the Moroccan Quarter; African music booms from shop doorways, competing with the rattle and roar of the Metro trains; the smell of bread baking fills the air, the pavements bustle, you keep your eyes wide open and your luggage close – shouldn’t all these young guys be at work?

Websites like ours don’t have big budgets for travel, so when the Peter Venere hotels website asks for “search criteria” – it’s always “price!” 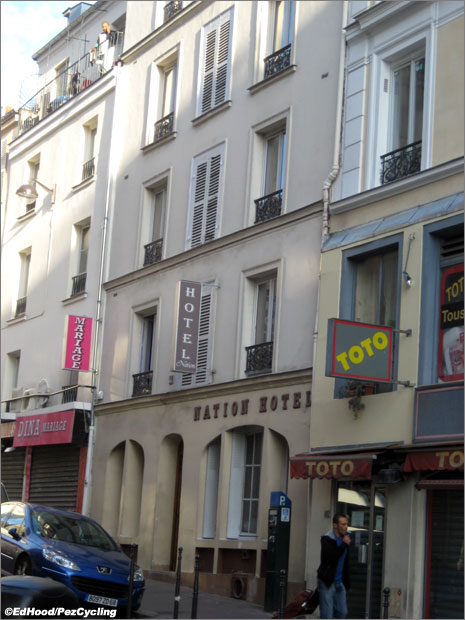 The manager at the Hotel Nation, Bruno, was a friendly dude – that almost made up for the towels with holes, toilet on the stairs with no paper and a hole in the wall where the window should be, building materials in the communal shower and the fact that each window only had one curtain. Still, it was only 48 euros per night – and the bed worked just fine. 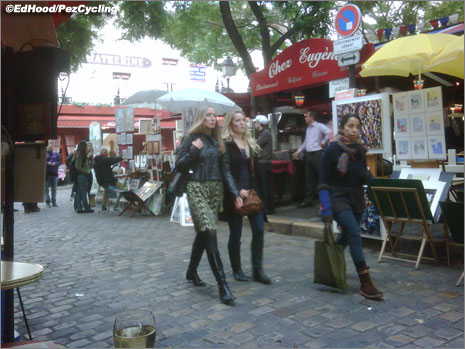 The hotel was right outside the Barbиs Rochechouart Metro station, a section of track here is elevated and there’s a huge street market below, in the mornings. 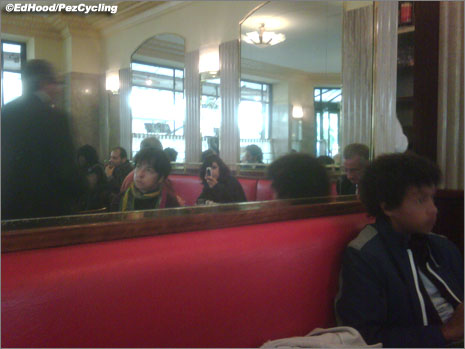 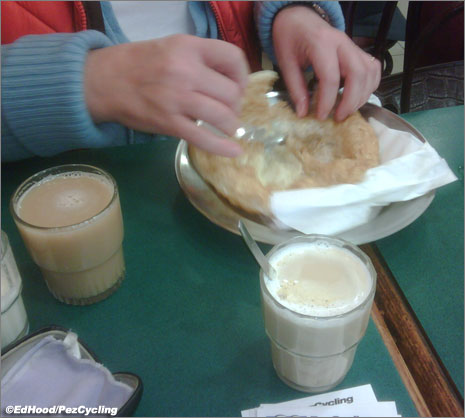 Not New Orleans beignets though, huge fellows, fried crisp in oil, which leave a slick on the roof of your mouth – perfect. Marlene asked for milk for her tea – eyes rolled and tongues clicked behind the counter at this request, but a little jug of ‘lait’ duly appeared. I waxed lyrical about my coffee to Marlene, the reply was as expected: “hmmm, those Moroccans might make good coffee, but they can’t make a pot of tea!” Maybe not, but there was change out of five euros for our two breakfasts. 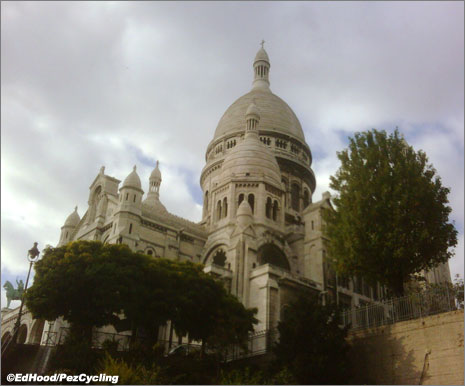 Tuesday afternoon and the journey had taken its toll, we climbed the endless steps to Montmartre, had a glass of wine or two and watched the world go by. It’s Tourist Hell up there in July, but much quieter in the middle of October – the only problem is the constant stream of artists pitching to paint/sketch/caricature you. Dinner was a pizza and sleep wasn’t hard to find. 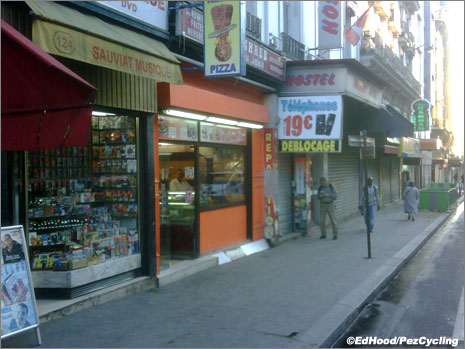 Wednesday morning was great coffee and bad tea, then the Metro back to Port Maillot to the Tour de France presentation for me, the sight seeing bus for Marlene.

With hindsight, I think it might have been nice to have a minutes silence for Frank Vandenbroucke, before proceedings got under way. But the Tour is bigger than any one man, and if Tom Simpson’s memorial on the Ventoux was ignored by the organisation, then VDB didn’t have much chance of being remembered. Presentation witnessed, sound bites noted, pictures fired off into the cybersphere, it was time to rendezvous with my girl. 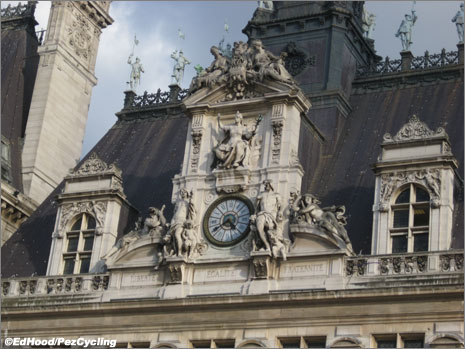 We took the Metro down to Hotel de Ville – that’s the town hall – ‘Liberte’ ‘Egalite’ ‘Fraternite’ says the inscription above the entrance – Freedom, Equality and Brotherhood – the corner stones of La Belle France. 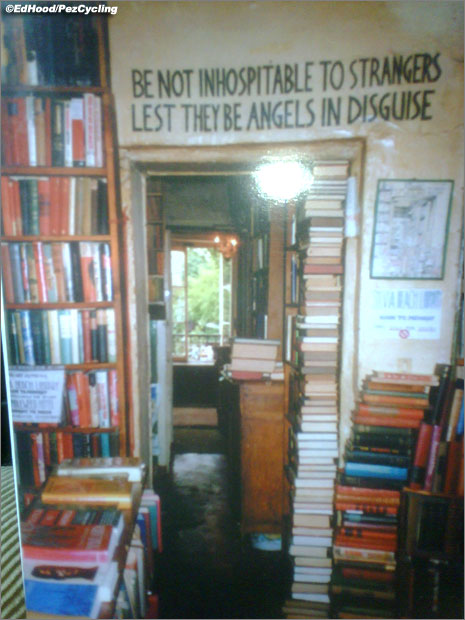 Across the Seine, past Notre Dam to a very special book shop – Shakespeare and Co. Step through the door and it’s a different world. “Be not inhospitable to strangers lest they be angels in disguise,” says the inscription above one of the lintols. Originally opened by Sylvia Beach back in the days of James Joyce, F Scott Fitzgerald and Ernest Hemingway – who read, wrote and debated, surrounded by her thousands of volumes. 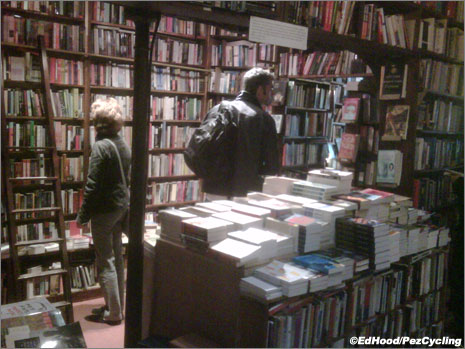 The current shop was founded by George Whitman in 1951, he must be around 90 years-old now, so he’s decided to pass the torch to his daughter. 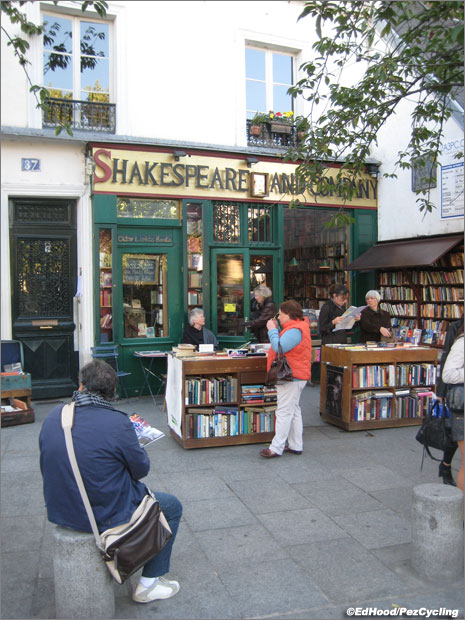 It’s on the Left Bank, opposite Notre Dame and well worth the effort to find. 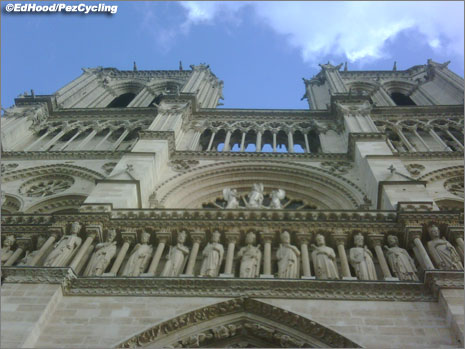 It was time for Marlene’s nap, by the time we got back to the hotel and time for me to finish my copy. A cool beer from the tap did the trick, a quick proof read, press “send” and my conscience was clear. The same Italian restaurant did a job on dinner for us, again.

Thursday morning and I was off and up early to see my Moroccan buddies for more of that cafe au lait. No pictures though – maybe not all of my fellow breakfasters have the paperwork you need to be in Paris – legally, that is. 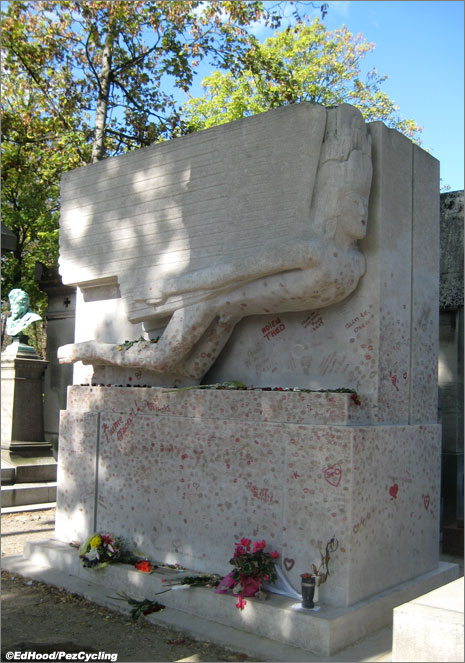 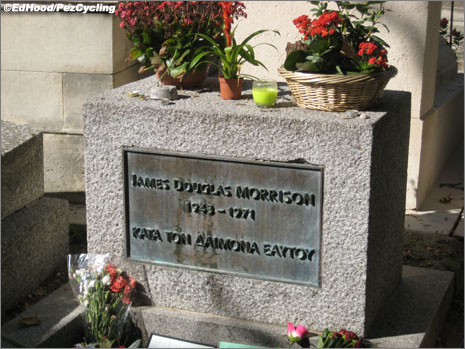 The huge Pere Lachaise cemetery is somewhere that’s worth a visit; Edith Piaf, Yves Montand, Maria Callas, Oscar Wilde, yes, and Jim Morrison, all lie within it’s cobbled pathed, high walled serenity. Oscar’s tomb is impressive, a huge Art Deco angel which is covered in ‘kisses’ from adoring fans. Jim’s humble grave has to have a railing round it these days; I remember visiting it back in the early 90’s and it was in a heck of a state – empty beer bottles, cigarette ends, graffiti and fans squatting on the slab. The cold and never ending grey tombstones got to us, eventually, and we grabbed the Metro down to Boulevard Saint Germain. 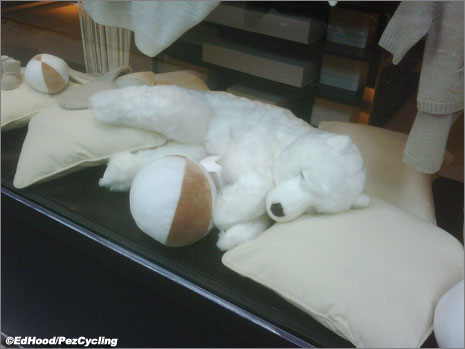 The shops are for those with platinum or black AmEx; one exquisitely window dressed emporium with a white bear sleeping behind the glass was selling toddlers’ outfits at wearing on for 400 euros – mad! (#flore) Armani has opened across the road from Cafe de Flore and just along the Boulevard there’s an Armani Casa (house) shop.

Ralph Lauren can’t let them away with that, and their temple to good taste and style is taking shape behind the tarps and scaffolding just along the street The streets between Flore and the Seine are dotted with shops selling antique maps, furniture and expensive shoes. Chauffeurs wait patiently in stretched 750i BMW’s – no pictures, the body guards tend to pistol whip you for unauthorised photography.

Talking of chauffeurs, some of the trendiest business types have eschewed four wheels in favour of two; their driver guides them through the traffic in a fraction of the time, then hands them their brief case and stashes their helmet for them, under the scooter seat before settling down to wait on the boss. 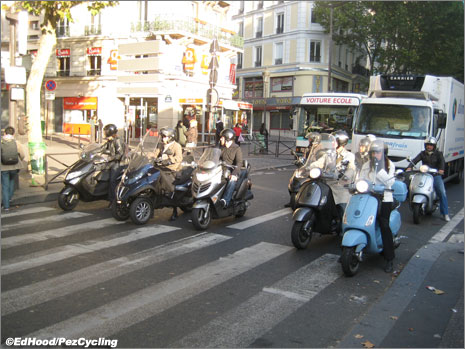 Scooters hunt in packs in Paris, lining up like a Moto GP start grid at pedestrian crossings, don’t even think about running across on amber. 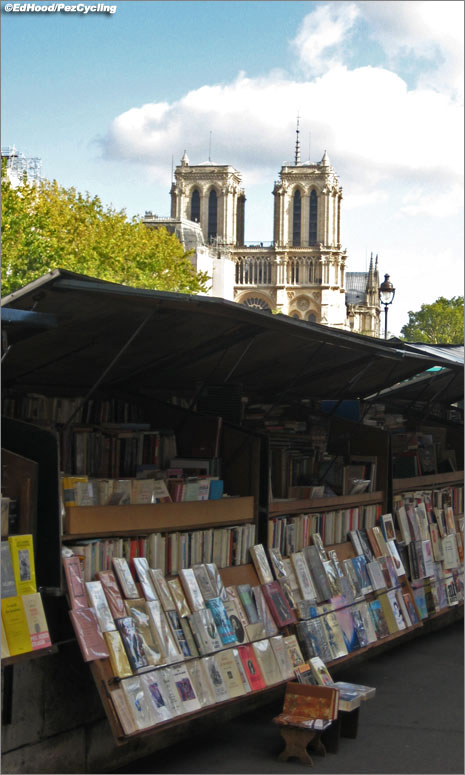 A walk along the Seine, in the autumn sun, browsing the book stands, is one of life’s simple pleasures. 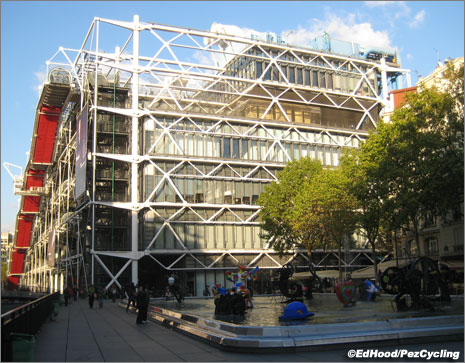 The creperie there offers good value – unusual in this city – before the Metro and the long trek, with all the adrenaline gone, back to Scotland.