Race Report: Fabian Cancellara is fast…it’s official and there will be no talk of electric motors inside frames, but it certainly looked like he was riding a motor bike today as he flew round the streets of Rotterdam to take yet another opening time trial. Lance and Alberto where close (5 seconds), but it’s early days yet…

We start with 8.9 kilometres round Rotterdam and some teams have changed the normal start order because of the weather forecast of possible rain for the later starters. Christian Vande Velde and Dave Zabriskie (Garmin), Bradley Wiggins and Edvald Boasson Hagen (Sky), Tony Martin (HTC) and Levi Leipheimer (RadioShack) are all running earlier than scheduled.

The course is a little technical with a lot of bridge crossings of the Maas River before heading back to the start area of the Zuidplein, lots of photo-opportunities with the fountains, trams and bridges all turning yellow for the Tour. 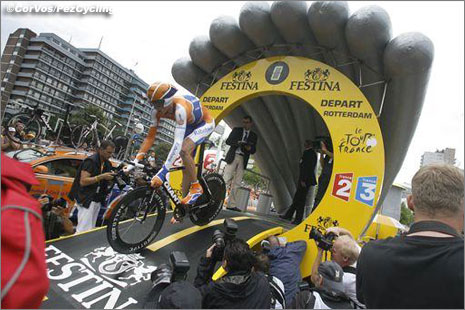 The 2010 Tour Is Off!
First rider off; Iban Mayoz (Footon) returns a time of 11:10, but this didn’t last long as Rabobank’s Tjallingii takes 21 seconds off that. As expected Tony Martin (HTC) was the early leader taking a minute off the time of Mayoz at 10:10, before that, American hopeful; Brent Bookwalter (BMC) was the previous fastest with 10:35. Other early starters; Christian Vande Velde (Garmin) was not flying today with a time of 11 minutes and Sky’s Edvald Boasson Hagen was a little faster with 10:32. Boasson Hagen was probably riding as a road-test for team leader Bradley Wiggins (winner of the first TT of this year’s Giro), but as it turned out the Norwegian was the quicker. David Zabriskie (Garmin) was also a little down by the end of his ride with 10:40.

It was not to be “Wiggo’s” day as he was slower than Martin all the way round the circuit finishing with a disappointing time of 10:56. Garmin sprinter; Tyler Farrar shoots round the course with a time of 10:28 to put him in 2nd spot. Last of the time change gamblers; Levi Leipheimer matches the time of fellow North American; Farrar and “Vino” has a reasonable ride of 10:38.

Tony Martin said yesterday that he wanted to be in the White jersey after the prologue, he didn’t think he would beat Cancellara, but would be happy with white this evening. 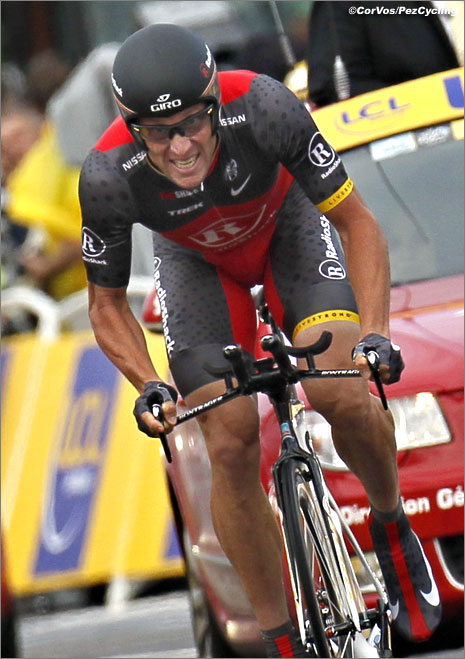 The rain on the course was sporadic and had caused a couple of slips, the worst being Portuguese rider Manuel Cardoso (Footon) and Mathias Frank (BMC) who both finished battered and blood stained.

New GB road champion Geraint Thomas (Sky) put on a great show with a time of 10:23 to push into second place. Sprint ace Robbie McEwen (Katusha) who has 193 wins to his name had a reasonable time of 11:05, Chris Horner (RadioShack) does a solid ride as Robbie Hunter (Garmin) replaces Zabriskie on the leader board with a 10:39. Triple World Champion Oscar Feire (Rabobank) says this will be his last Tour de France and takes no chances on the wet Dutch roads for 10:48. 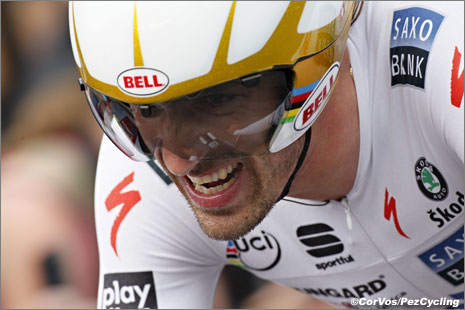 RadioShack’s possible “Plan C” Andreas Klцden pushes his way into the top 10 with a good time of 10:36 as team leader Lance Armstrong is going through his warm up on the turbo trainer back at the truck. Green jersey hopeful Mark “Bad Boy” Cavendish makes sure he stays up-right for a safe time of 11:10, David Millar (Garmin) looking like he’s wearing a skin suit 3 sizes too small starts fast and passes the check point (4.3 km’s) in 2nd place 3 seconds back, he keeps the pressure on to go 2nd with 10:20.

Frank Schleck (Saxo) shows he is in fair form with a 10:57, not as fast as Robert Gesink (Rabobank) at 10:51 or Alessandro Petacchi (Lampre) with 10:48. Tour winner Carlos Sastre (Cervelo) kicks off down the ramp as the roads dry, he is down to 7 team-mates as Florencio was withdrawn by the team because he had used a cream that was not passed by the team doctor and Tour organisers ASO would not let the team replace him. Sastre’s time was 10:55, not bad for a man with a herniated disk! 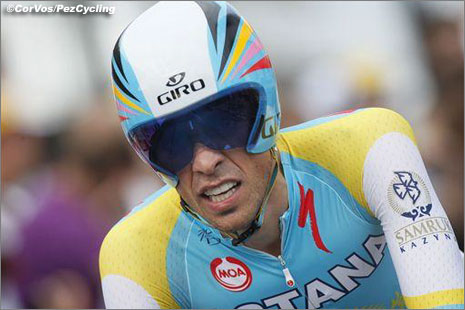 A very stern looking Lance Armstrong (RadioShack) set off in front of the “motoring” Fabian Cancellara (Saxo) who was followed by Tour favourite Alberto Contador (Astana), the gauntlet was well and truly thrown down. 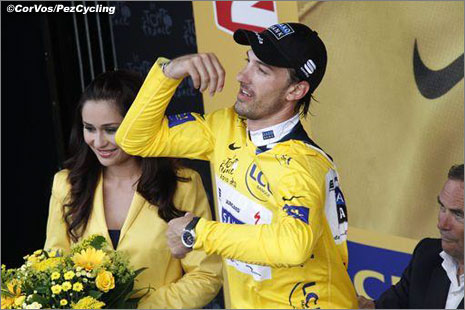 As you would expect all looked very fast cutting through the bends of Rotterdam on near dry roads. Armstrong looked very fast, almost flying over the big bridge (and looking twice as fast as the French housewives’ fave Thomas Voeckler who appeared to wrestle his bike the whole way) and was in 3rd place at half way 5 seconds behind Martin, but Cancellara was flying at 6 seconds faster. Contador was 12 seconds adrift at this point.

Lance has leaned down considerably since last year, and continued to blast his way around the course to finished in 10:22, meaning business all the way. But we didn’t have to wait long for Cancellara who came in at 10 minutes exactly annihilating the opposition – no surprises there. Contador looks to be on form and lost only 5 seconds to Armstrong with a 10:27 – no worries in the Astana camp tonite. 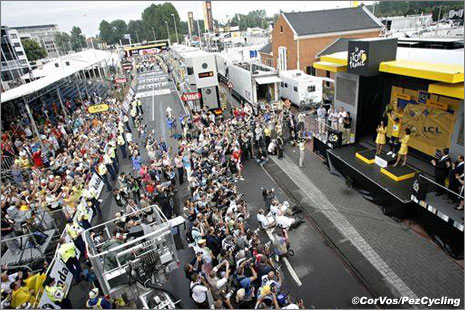 Tony Martin was at the top for a long time, but the flying Swiss did it again and the race is on with all the top men there or there about. Stay PEZ’d for all the action on – and beside – the road .