It’s been a long, long time since Alessandro Petacchi flew across a Tour de France finishing line with his arms aloft in victory, but he’s enjoying a bit of a renaissance these days and has already nailed success for Lampre.

Petacchi negotiated the mayhem of the closing kilometers into Brussels as other name sprinters crashed left, right, centre, over, under, sideways, down. The HTC-Columbia lead-out train was well and truly shunted off track by a series of tumbles, leaving only Mark Renshaw in a challenger’s role. He was second, with Thor Hushovd third. Problems for Mark Cavendish in his quest for the green jersey. 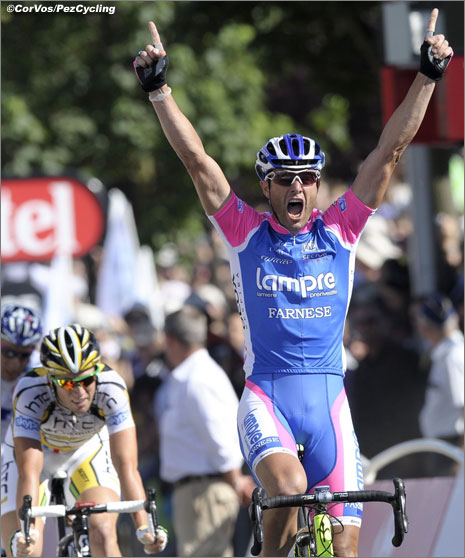 So, how did things unfold? A sunnier, drier day rolling out of Rotterdam, and down Holland’s west coast, the peloton was twitchy with worries over cross winds and crashes.

The stage one start line, and the field was already minus three riders. Xavier Florencio of Cervelo didn’t even make it to the prologue after a little topical cream tantrum; Manuel Cardoso and Matthias Frank finished the prologue battered, bloodied and broken, and are on their way home.

Under way, and Lars Boom did his bit for home town team Rabobank, setting off on the attack. Alan Perez (Euskaltel) and Maarten Wynandts (QuickStep) joined up and the trio were clear by seven minutes in no time.

Behind, there was crash after crash after crash. Pez pal Adam Hansen’s collarbone vs the road (best wishes, Adam!); Ivan Basso vs a dog; Linus Gerdemann vs gravity; David Millar down but not out.

HTC-Columbia were powering things along for Cavendish, slicing the trio’s lead rapidly on the run-in to Brussels. Wynants kept going as Katusha’s Alex Pliuschin made it up to him – Boom and Perez dropped.

Into the final two kms, Cavendish lost his chance as Cervelo’s Jez Hunt had cornering problems, taking out the Manx Missile, Oscar Freire and Tyler Farrar. 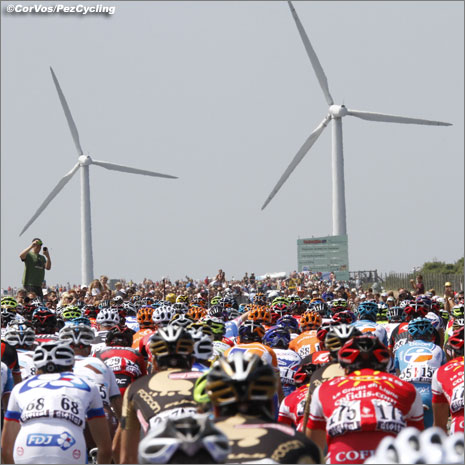 Lampre took over at the head of affairs, with Petacchi timing things perfectly to roar clear of Renshaw and Hushovd.

Behind them, the nonsense continued inside the final kilometer, with the main contenders held up by another pile-up. Everyone got the same time, but it’s stress, chaos and hassle that no rider needs at this early point in the Tour.

Big congratulations to the Italian veteran – he might not be the quickest sprinter any more, but if he can stay upright and out of trouble, he’s in with a chance as the quicker, crazier, younger guys eat tarmac.

Matt is on the road, so stay tuned for more close-up observations from the heart of Le Grand Boucle.

Tour de Pez: Around And Around In Rotterdam!