Race Report: A quiet day with three break away riders out front for hours. Little did we know that at the end we would see some exciting rough-house action in the gallop for the line. Pushes and head-butts and Mark has another stage win.

Today’s stage is from Sisteron to Bourg lиs Valence, a journey of 184.5 kilometres with one climb; the Col de Cabre (4th Cat), the summit is after 56.5 kilometres, after that the stage downhill and flat to the finish.

Non-starters were Charlie Wegelius of Omega with a stomach problem and Robbie Hunter of Garmin, Hunter broke a bone in his arm yesterday and finished the stage, he wanted to start today, but it wasn’t going to happen.

From The Gun
Three riders were not put off by the heat and launched themselves up the road well before the climb. Stephane Auge (Cofidis), Jose-Alberto Benitez (Footon) and Anthony Geslin (FdJ), built up a lead of 1:40 over a group of rider who were battling over mountains points, the leader Jeremy Pineau (Quick-Step) won the sprint for 4th to take 1 point at the top of the Col de Cabre, the riders still had 128 kilometres to ride to Bourg Lиs Valence. 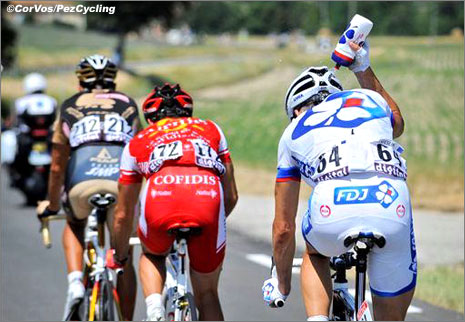 Down in the valley the leaders were 2 minutes ahead of the regrouped yellow jersey bunch which had HTC, Lampre and Saxo Bank riders on the front into a strong head wind, all of the three riders up front were over one and a half hours down so they were not any danger to the overall.

With 100 kilometres to go the three had set into a steady rhythm and the lead had risen to 3 minutes again. The crowds were not as big as yesterday’s Bastille Day, but still impressive going through the villages. The French like a home winner on the 14th of July and French TV had a record number of viewers even though the Portuguese rider; Sergio Paulinho took the honours.

50 Kilometres Left To Race
As you might expect from a day like this nothing much was happening, the lead fluctuated between one and a half to two minutes, Garmin’s David Zabriskie was on the front as Andy Schleck was chatting with Alberto Contador and Fabien Cancellara was passing the time with good friend Juan Antonio Flecha. The race was running well behind the slowest schedule, but in this heat and considering what the riders have been through and what is to come, you can’t blame them. 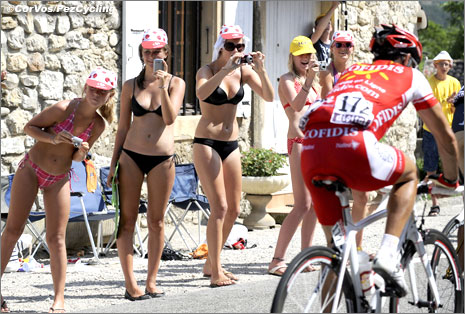 The bunch could see the escape riders on the long straight roads, this was maybe a little early for the sprinters teams to have to control the peloton to the line, so there was a general slowing down and the gap went from under 40 seconds to over a minute again.

A little bit of excitement as the fast TGV train passes and some horse riders have a bit of gallop next to the race as the lead closed to 20 seconds. The two French riders; Geslin and Auge seemed to be watching Benitez as he looked the keenest to carry on with a couple of attacks. 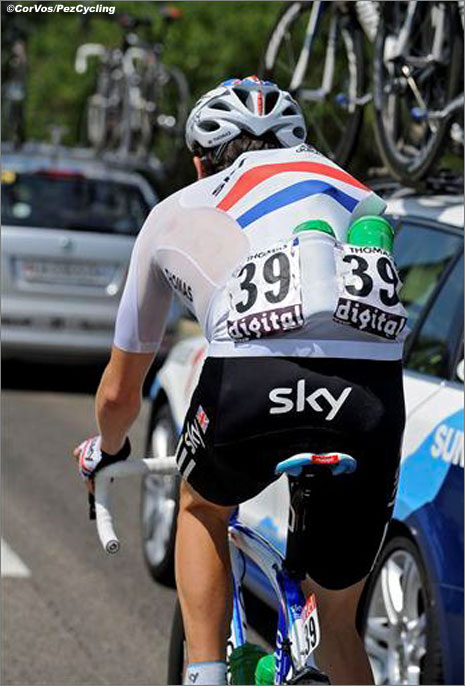 At 27 to go the three could feel the breath of the bunch on the back of their necks and so Benitez took off with Auge on his wheel, Geslin at that point called it a day and waited for the peloton. Benitez and Auge shake hands and give up the battle at 22 K’s out.

Strangely RadioShack have five riders on the front going under the 20 to go banner, FdJ put two riders off the front, the plan didn’t work and Saxo Bank started to drive keeping Andy Schleck safe near the front as RadioShack disappear. Vinokourov is Contador’s “pilot fish” leading him to the front as Saxo Bank carry on with the speed work, which was causing problems at the rear of the bunch, mountains leader; Pineau being one of them. 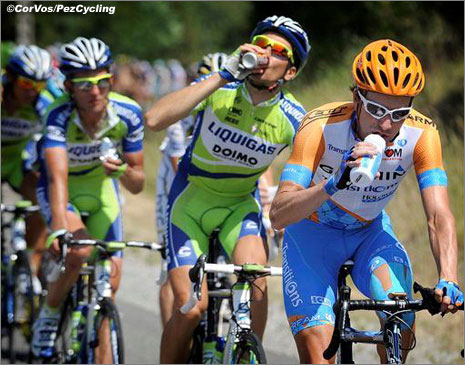 The Last 10
Rabobank joined Saxo at the front as the first attack came from Sylvain Chavanel (Quick-Step), he was joined by Popovych (RadioShack), this activated HTC and they threw five to the front and it was all together very quickly.

5 K’s Left!
Lampre and Cervelo (with Hunt) showed themselves until Sky and HTC put riders in the lead out train. Hushovd, Ciolek, Freire and Petacchi are hovering near the action. With a little head-butting from Renshaw to Dean, this opens the door for Cavendish to go early, Petacchi sees the move too late and can’t get on terms with the flying Manxman who has a bike length in hand. 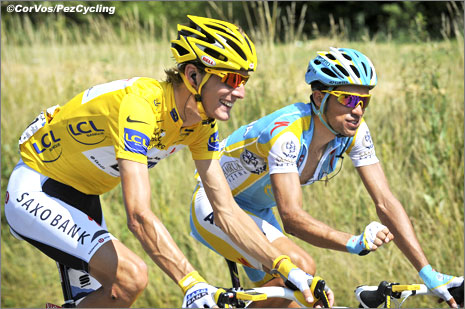 Dean wanted to close the door on Cavendish to let Farrar come round on the other side, but Renshaw kept it cool and the gap was there with 350 meters before the line for Cav to go for a longer sprint than he would normally want, it worked and no one could get near him.

Renshaw maybe booted out of the Tour! 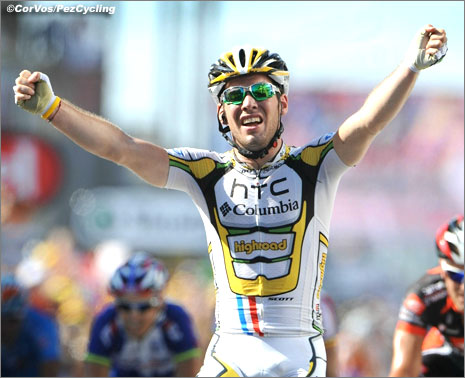 Stay tuned to Pez for Gord at the Roadside and tomorrow’s hard stage from Bourg de Pйage to Mende with its five climbs…nice!