Race Report: Love him or hate him, criticise him for his past mistakes if you want, but Alexandre Vinokourov has always had an aggressive style and will enliven any race he wants to win. After his break away yesterday his legs must have been screaming on his solo win in Revel today, but he did it!

The road from Rodez to Revel is up and down with three 4th Cat and two 3rd Cat climbs on its 196 kilometres, but there isn’t anything too hard with a short climb (Cфte de Saint-Ferrйol, 3rd Cat) 8 kilometres before the finish. Tomorrow is a hard day with the summit finish at Ax 3 Domaines, followed by a very hard final week in the Pyrenees, an extra rest day for the top men on GC?

Tyler Farrar of Garmin has called it a day after riding 10 stages with a broken wrist. The disappointed rider from Washington said “I am devastated to leave the Tour and my teammates. You never want to leave any race but especially the Tour”.

A Group Away
It was fairly predictable that a group would go early and three riders didn’t disappoint; Juan Antonio Flecha (Sky), Sylvain Chavanel (Quick-Step) and Pierrick Fedrigo (Bbox), all three are far down on overall and are top performers, with 144 kilometres to go, they had over 5 minutes advantage. 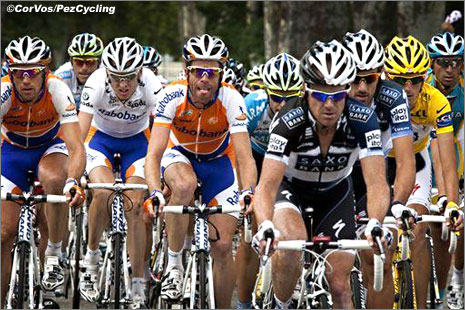 Lampre and HTC had their men on the front of the bunch, not chasing, more of a controlling situation. With the three away there are no points left for the green jersey and also the mountains leaders are not interested in any battles today as there will be many chances for them next week.

Lampre pulled the bunch up the Cфte d’Ambialet (3rd Cat) behind the three leaders with 72 kilometres covered, at this point it appeared that Lampre wanted to put Alessandro Petacchi first across the line in Revel and back into the green jersey. This morning, the current wearer of the green; Thor Hushovd said the last climb of the day is hard enough to lose some of the sprinters, but that Petacchi was a strong enough climber to get over it in contention.

The break succeeded the last time the race came to Revel in 2005, on that occasion Paolo Savoldelli, who was in Discovery Channel that year, took the honours.

100 Done, 96 To Go!
Nothing much had changed as they pass through the feed zone; Flecha, Chavanel and Fedrigo were 4:30 in front of the well still controlled peloton by HTC and Lampre with one rider from Milram for their sprinter; Gerald Ciolek.

Over the top of the Cфte de Puylaurens (4th Cat); Chavanel was first followed by Fedrigo and Flecha with a lead of 3:30, Oscar Freire (Rabobank) was at the front and Dan Lloyd of Cervelo was at the back of the steady bunch. The course is mostly flat for the next 60 kilometres until the Cфte de Saint-Ferrйol at 188 kilometres, 8 from the finish.

50 Kilometres to Revel
The pace in the bunch had lifted a little, or the lead were getting tired, as the gap came down to 1:55 and it was a matter of time before Flecha, Chavanel and Fedrigo were back in the fold, Sylvain Chavanel will be disappointed not to take his third stage win of this Tour.

The gap was brought back to only 1 minute with 35 kilometres to go, HTC still doing the work as Astana had moved five riders nearer the front, the peloton was one long line with a cross wind and HTC‘s Tony Martin doing the damage to many tired legs. Gaps were opening at the back, dropped included the mountains jersey of Charteau (Bbox) and Millar (Garmin), at the back of the peloton was Armstrong (RadioShack) and Cancellara (Saxo).

It’s All Together!
Before the base of the climb the three were recaptured and the speed increased as Cervelo and Milram joined the fray. First to attack was ex-world champ; Alessandro Ballan, then Nico Roche and Carlos Barredo tried to catch him as Vinokourov and Luis Leon Sanchez came past them to bring the lead together, but Vino was the strongest and was off trying to do it on his own. 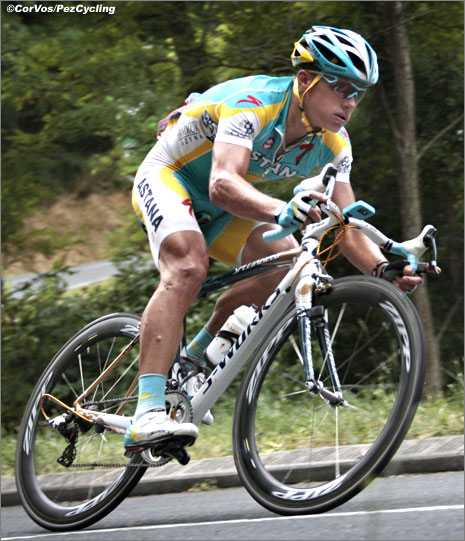 Chris Horner brought the bunch up the hill, then Voeckler headed off to get together with the flying Kazakhstan who had a stage win in mind with only 5 kilometres down to the finish.

Voeckler wasn’t fast enough and was caught by the bunch, Vino had 19 seconds advantage with 2 kilometres to go. The man from Astana had the bit between his teeth as Milram were hunting him down, but Vino had enough time to look back, check the the gap to the chasers, zip up his jersey and put both arms in the air. 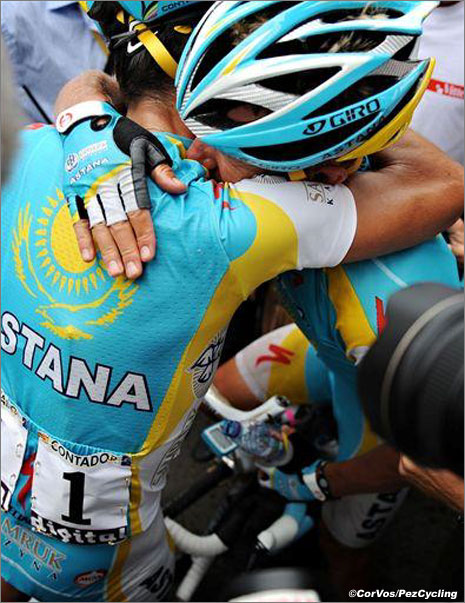 Second place was a hard fought battle between Cavendish, Petacchi and Boasson Hagen and Hushovd was just behind them in 8th place, so green goes to Petacchi again.

Over the finish line the first to congratulate the stage winner is team-mate Alberto Contador, who had worked for the win, so all OK in the Astana camp after yesterday.

On the TV interview, Vinokourov said; “yesterday my sons asked me why I didn’t win? So today I had to do it for my family”. 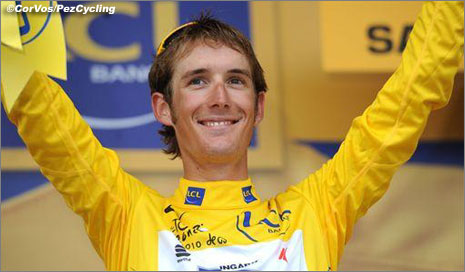 Stay tuned to Pez as our man Ed Hood has taken over from Gord down on the road side. Mountains from now on till Paris, baby!

Tour de Pez: A Day For The Sprinters?