Race Report: So said Andy Schleck after losing his maillot jaune after a dropped chain and an immediate attack by arch rival Alberto Contador came just kms short of the summit of the HC Port de Bales climb. It was a move of questionable fairness – striking when your opponent is down, but just goes to show you the gloves are off as just 8 seconds now separate the two leaders.

The twenty or so seconds it took Schleck to remount his chain set up a no holds barred chase and duel to the finish, as both Contador and Schleck drove the pace in their respective groups, and overshadowed what would have otherwise been a big story in itself – French Champ Thomas Voeckler’s solo win on this brutal day. The gritty former Yellow jersey emerged from the day’s escape as last man standing – attacking his break mates midway up the final climb, and soloing to an inspired victory. 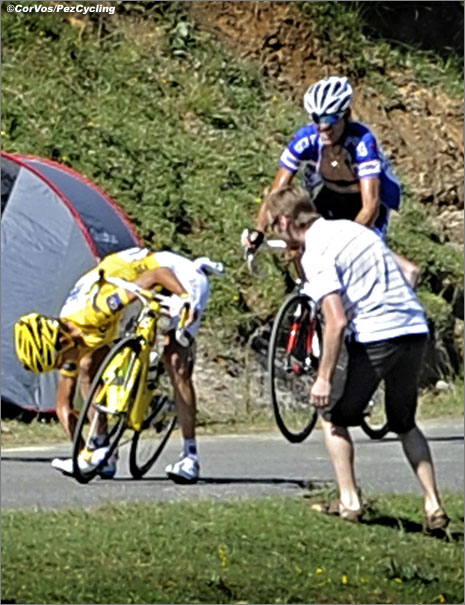 Back To The Start
It’s the 100 year anniversary day for the Pyrenees! A lumpy 187.5km from Pamiers to Bagneres De-Luchon was marked by the monstrous Port de Bales climb, a long 19.1km at 6.1% where surely the fireworks would go off. And go off they did. Thomas Voeckler took a very fine win, but the Schleck/Contador battle had some serious twists and turns in it.

Prior to the Port de Bales, the riders would tackle two Cat 2 climbs and one Cat 4 climb, with one of the Cat 2 climbs being the Portet d’Aspet, where Fabio Casartelli died on the descent in 1995.

Throughout the day, the usual break went away, fighting for the early points and KOM opportunities. But the battle was joined in earnest on the slopes of the Port de Bales, where the Saxo boys set about slicing up the group, setting a tempo that sent all but the big names out the back.

With 25km left, Saxo was down to just one helper, Chris Anker Sorensen, for Andy Schleck up the steep part of the climb. The group they lead had been whittled down to the elite names of the Tour de France.

Thomas Voeckler ploughed the lonely furrow alone near the top of the Port de Bales while BMC’s Ballan lurched behind chase. The chase groups numbered 5 now, and Voeckler held a 6 minute lead over the yellow jersey group.

Voeckler (BBox) lead Ballan (BMC), who was followed by Vansummeren (Garmin-Transitions). The next chunk of riders was Brain Vandborg (Liquigas-Doimo), Francesco Reda (QuickStep) and Aitor Perez (Footon-Servetto). And then they were followed by a larger group containing Serguei Ivanov (Team Katusha), Lloyd Mondory (AG2R La Mondiale), Luke Roberts (Team Milram), and Sebastian Turgot (Bbox Bouygues Telecom). Time gaps were all over the board, but between Voeckler and the yellow jersey group of Schleck about 6 minutes separated them.

Andy Schleck lost his last pacemaker Sorensen, and seeing the number of Astana riders waiting to pounce, made his move, attacking the group. Sanchez, Contador, Menchov, and Van den Broeck were the only 4 able to match the acceleration. The top 5 men in the tour were now in their own group. Gesink, Leipheimer, Kloeden, Sastre, Armstrong, and a select few others were dispatched out the back, unable to match the pace.

Schleck was honoring the yellow jersey with such an attacking ride, and it seemed only Sanchez would come around to take a pull to help.

After a bit of shadow boxing, Schleck made a huge dig, separating himself from the group and then the bad luck bug came to bite – he dropped his chain. Forced to dismount and fix the problem as he was alone, he mounted the chain once. A remount attempt, and it fell off again. Again, he dismounted. Contador, seemingly, punched it. Sanchez followed, along with Menchov. Perhaps Contador was breaking of the code of not hitting a man when he was down? 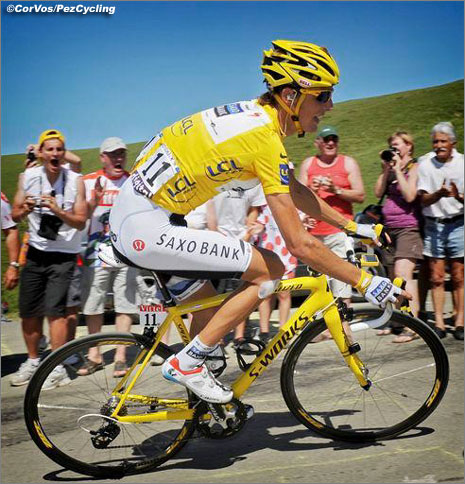 Schleck remounted and set about a furious chase, passing all the names he had just sent out the back a little bit earlier. With poise and a solid tempo, he motored up the hill. He needed to make up about 20 seconds to the Contador group. He was dragging whomever could hold on, which now was Vino, Leipheimer, and Vanden Broeck, and over the summit of the Port de Bales he was still down 20 seconds. That was an amazing ride from the yellow jersey.
Now on the descent in earnest, the riders were taking massive risks. Schleck dropped like a stone trying to pin back every precious second he could, but in fact he was losing time. 25 seconds.

Not to forget about Voeckler who was desending taking risks as well, as he slipped out his rear wheel around a switchback but made a nice recovery. The stage win was looking really good for the man from the Alsace region. 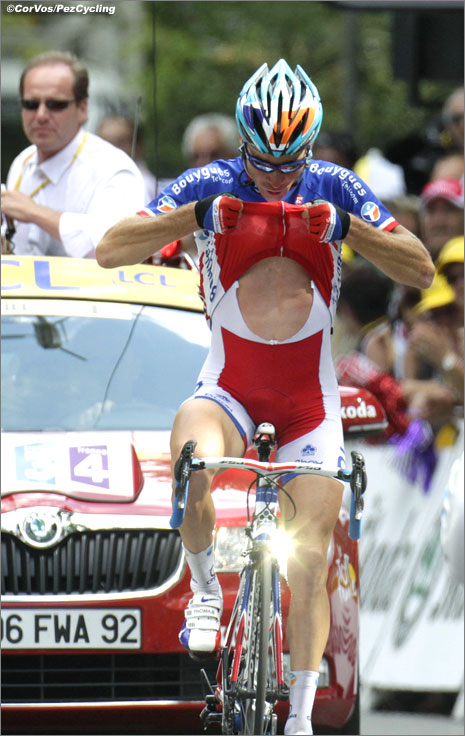 The yellow jersey found some help in Jurgen Van den Broeck who set some pacemaking on the descent, but Andy had lost now a few more seconds as they sped under the 10km banner. Then he gained a few back. Andy Schleck will be buying Van den Broeck a beer tonight, I hope. Even though the Belgian is looking to protect his 5th place overall, he’s helping the Luxemburger a great deal.

Voeckler was clear of Ballan and Aitor Perez, and the Contador group was behind that. All the other “escapees” – and I use that term loosely – were absorbed and dispatched. 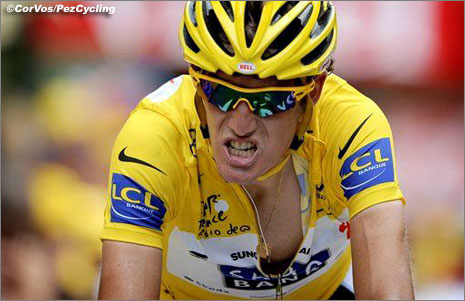 The French national champion, escorted by thunderous applause from the crowd, soft pedaled the last few hundred meters, having earned his day and his victory in fine fashion. A few waves to the crowd, a kiss to the tricolor, and he was in. 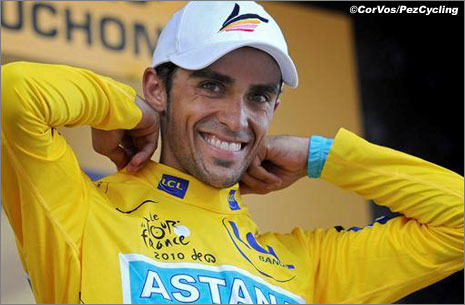 Behind, the chasing was furiously underway. Contador’s advantage was shown at 40 seconds – enough for yellow. Andy Shleck was wrapped around his top tube in an attempt to be as aero as possible, hurtling down the hills.
Perez and Ballan crossed the line in a dead sprint for 2nd and 3rd.

Contador’s group came into town, which now numbered 8 riders. Lloyd Mondory won the sprint for 4th place, but the group was together, which was most notable for Menchov and Sanchez, locked in battle for 3rd place honors.
Andy Schleck dragged himself to the line, having ceded 39 seconds – and thusly the yellow jersey – to Alberto Contador. 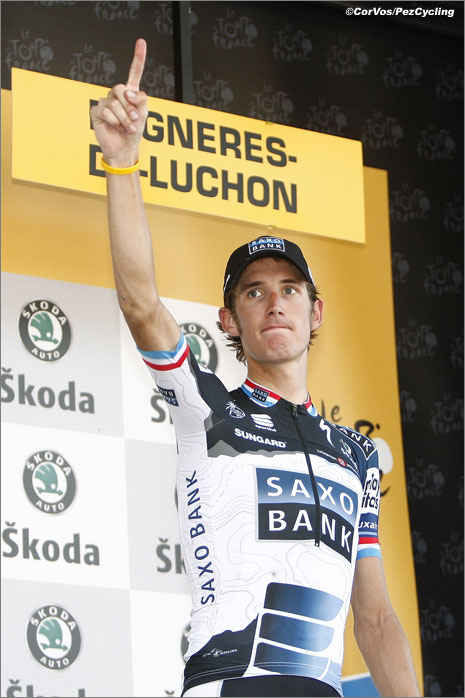 The talks in the bars tonight will be rife with “should he have or should he have not” attacked? This will be a stage talked about for a long long time to come.

Cornered for comment immediately after the race, Andy Schleck had this to say about Contador’s move, “It is not for me to say if it is fair or not, but I wouldn’t have raced that way.”

Tour de Pez: The View From The Pailheres

Tour Coach: To Wait Or Press On?