Race Report: After yesterday’s day of crashing, the riders must have hoped for a safer day, but it wasn’t to be with riders all over the road on their way to Spa across Belgium from Brussels. Sylvain Chavanel was at the front all day…the best place to be!

Today’s 201 kilometre stage is a bit of a mini Liege-Bastogne-Liege with three, 4th Cat climbs and three, 3rd Cat climbs including the Stockeu and the last climb; the Rosier, coming 12 kilometres from the finish in Spa.

An Easy Start
A light drizzle welcomed the riders at the start in front of the Royal Palace (weather report from our man in Brussels; Matt Conn). Adam Hansen (HTC) didn’t start due to a broken collarbone. Of the others involved in the varied crashes; Alberto Contador and Oscar Feire both said they had banged a knee, but no problems. Mark Cavendish and Jeremy Hunt also came down with Freire 2 K’s out, but all rode in to the line. Ivan Basso, David Millar and Levi Leipheimer all hit the deck due to a dog wandering into the road, Leipheimer needed an x-ray on his wrist after the finish but all was OK.

First attack of the day came from Sylvain Chavanel who was riding solo until joined by seven others by the 17 kilometre mark, the group consisted of: Sylvain Chavanel and Jerфme Pineau (Quick-Step), Marcus Burghardt (BMC), Sйbastien Turgot (Bbox), Rein Taaramae (Cofidis), Francesco Gavazzi (Lampre), Jurgen Roelandts and Giro Mountains winner; Matt Lloyd both from Omega Pharma-Lotto, they built up a lead of nearly 7 minutes by 33 kilometres out, Saxo Bank were driving the bunch, but not driving too fast! 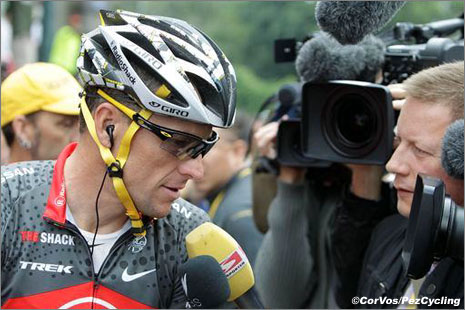 Lance made it through today’s stage, but once again hit the deck – like most of the favorites.

After 50 K’s
The gap started to come down slowly before the first climb, the Cфte de France after 98 kilometres. Pineau took the first Mountain points of this year’s Tour from Lloyd and Taaramae, meanwhile Alessandro Petacchi was removing his under vest, as he had the green Jersey round his neck it all looked a little risky going round the bends! The lead had been whittled back to just over 3 minutes at the half way point; the average speed had been 46.6 kph as Cervelo took over the lead work.

The Last 100 K’s
Saxo Bank and Cervelo were the leaders of the peloton towards the second climb of the day, the Cфte de Filot after 128.5 kilometres. Pineau took the points again from Taaramae and Lloyd in 3rd place; the gap was hovering around 3 minutes.

The next climb of the Cфte de Werbormont came only 7.5 kilometres after the Filot, Roelandts led Lloyd out for the sprint for the mountains jersey, but Taaramae and then Pineau came past them for Pineau to take top points from Taaramae and Lloyd, whoever takes the most points today could hold the jersey for a long time and Jerфme Pineau knows it!

50 To Go!
The rain started to fall as the leaders head over the undulating roads towards the next climb of the slightly harder Cфte d’Aisomont with 40 kilometres to the finish in Spa, the time gap was down to 2 minutes. The wet conditions caused a big pile-up in the bunch on a slippery bend, most riders were up quickly, but Cunego (Lampre) and Dean (Garmin) where a little slower. Omega’s Mikael Delage made contact with the steel barrier and didn’t look like he would be riding any further. 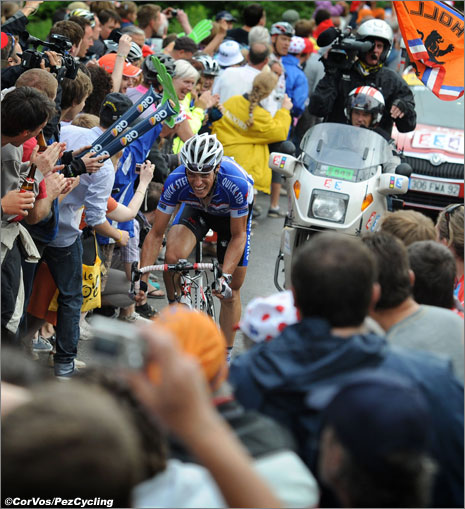 Up front; Sylvain Chavanel had jumped away from the other seven, but to no avail as he was pulled back on the descent before the d’Aisomont. As they crest the top it was Pineau, Taaramae and Burghardt in that order, Matt Lloyd and Sebastien Turgot had sat up and drifted back to the peloton. 39 kilometres to go and the lead was down to 41 seconds.

The Stockeu comes right on the heels of the d’Aisomont, it is quite steep, fairly narrow, and includes a bad road surface. As the peloton pull in the break-away riders, Maxime Montfort (HTC) attacks, he isn’t fast enough to catch the remainder of the group: Sylvain Chavanel and Roelandts.

Back in the bunch there is a big pile up on a bend, the worst off is Andy Schleck who takes a teammate’s bike, but isn’t happy. Just about all the riders fell and there are bodies all over the place with 25 kilometres still to race: Confusion reigned!

A truce was called in the bunch as they waited for the favourites to regroup, Jeremy Hunt (Cervelo) held the tempo steady, but the Schleck brothers were chasing behind. All this suited Chavanel and Roelandts as their gap rose to nearly 2 minutes with 20 kilometres left.

20 K’s To Spa!
It was hard to say what was going on, but Chavanel was out front on his own, then there was a group including Cancellara with others at 2 minutes, then a further 40 seconds back Armstrong, Contador and most everyone else. Then the Saxo group with the Schlecks at a further 3:45.

Cancellara had put the word out that all should wait and they did, the bunch regrouped, but we would have to wait to see the damage the big crash caused, the shit had hit the fan big time and it looked very much like it was form a herd of cows!

With 10 kilometres remaining Sylvain Chavanel had a 2 minute 45 second advantage over the compact peloton as he tops the Col du Rosier. Chavanel had the bit between his teeth and was not sparing the horses and the peloton were not getting any nearer him as he entered the last 5 kilometres. 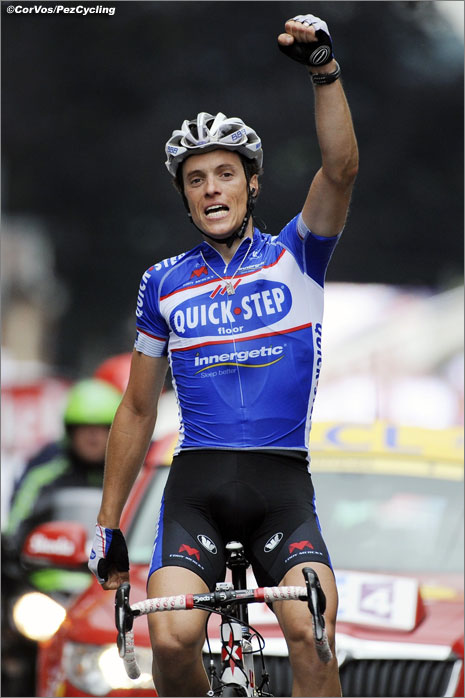 The bunch were not interested in the chase and so at the “Red Flag” of the last kilometre Sylvain Chavanel of Quick-Step had a lead of 3 minutes and 15 seconds in hand to enjoy the second Tour stage win of his career. He crossed the line kissing his pendant with one hand raised in victory, meanwhile Cancellara had words with the organiser’s car and the stage was annulled and the bunch just rolled in spread across the road…no sprint today chaps!

Chavanel took the Yellow and the Green jerseys and team-mate; Jerфme Pineau did enough for the Mountains jersey. White for Tony Martin (HTC).

Tomorrow will probably bring more crashes as the riders tackle a Paris-Roubaix sort of day with lots of cobbles, stay tuned to Pez for all the action.