So the race rolled out of Wanze, with a palpable sense of trepidation. All the talk pre-race was about what crashes happened yesterday, as well as just how in the hell is anyone going to get through today without hitting the deck? At least the weather was good….hopefully the lads had good coffee as well with their breakfasts.

Their gap was kept manageable by a nervous peloton, which at times was all strung out and at others blocking the road en masse. As the first sections of pave loomed, all the GC favorites were armored by their teammates and being sheparded to the front. Despite Quick Step holding yellow, it was the Saxo Bank team that dictated affairs as the first sections loomed with just under 50km to go. Jens Voight spent a lot of time on the front by himself with the Saxo’s lined up behind him. Contador, Menchov, and the other GC favorites were all crammed up near the business end of things.

The lead group charged into the second section, with Hesjedal on point front to back. The group came hurtling onto the cobblestones right after them. Some small splinters occurred in the main group, but the section was handled well with no major mishaps. 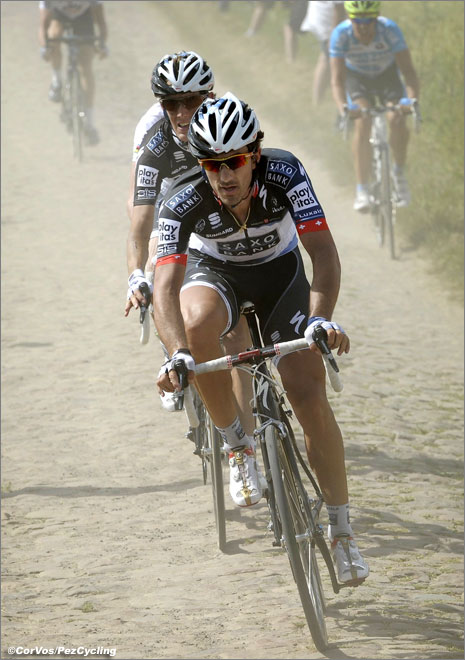 Fabian Cancellara did the work of an entire team today when the selection was made. His motor helped him back into Yellow and gained teammate, Andy Schleck, significant time on GC. It was a great day for Saxo Bank, save for the loss of Frank Schleck: that will hurt.

From the break, Garmin’s Hesjhedal took a little dig at his breakmates. Behind, Cunego got hung up in a crash involving about 7 or 8 men at the back of the pack.

As the next section loomed, Saxo Bank took control of things again, again with Voight on the front, then O’Grady. Clearly Riis’ boys were being extra sure to keep the Schlecks up near the front at all costs.

Crossing into France from Belgium, Cervelo took the reins for Thor approaching the 4th section of cobbles, and brought the break down to under a minute. Between Cervelo and Saxo Bank, the field was again pencil thin as the worst of the cobbles loomed. All the dudes with a “1” at the end of their number were scrambling to the front, getting swarmed, scrambling again to the front. Nervous times on the roads of the Tour de France.

And for good reason. At the front end of the field a massive pile up happened. Most notably hurt was a prone Frank Schleck. David Millar, George Hincapie, and others were on the deck. At first tally, it seemed the big names made it to the good end. Or at least fragments of the good end….Armstrong was gapped, so Saxo went to the front and drilled it, even though Frank Schleck looked badly hurt behind. No replays of yesterday it seemed. Contador was in a group a few seconds behind the Armstrong group. Ryder Hesjedal took off on his own, in a bid for solo victory at the very front of the race. 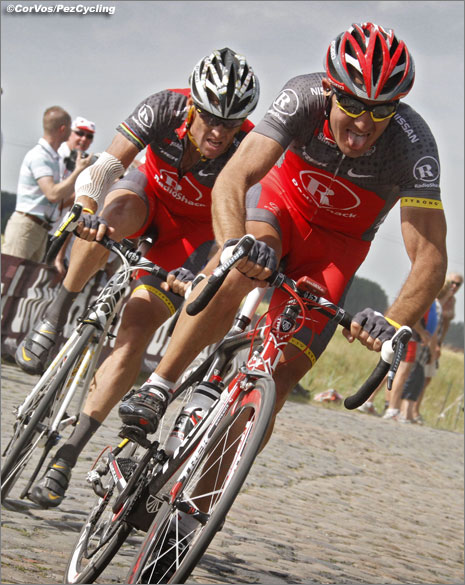 Lance Armstrong’s string of good luck spanning almost a decade ran out in Stage 3 today with an ill-timed flat. Armstrong’s time losses will be difficult to overcome in the upcoming stages, but there’s still a long, long way to go.

The first chase was some Saxo Bank riders including Andy Schleck, an astute Cadel Evans, Thor Hushovd, and a few Sky riders, about 30 seconds behind the Canadian. Armstrong’s group was another 30 seconds roughly behind that, and Contador had just bridged up to it with the fragments of his group. Right after that, it looks like Armstrong flatted and got a new wheel. He set back to chasing with the help of Popovych. More splinters of groups scattered all over the road.

Without a doubt, the C-Word was in full effect. CARNAGE.

In the second chase group, Menchov, Vinokourov, and Contador were just flfying to extend their gap over the Armstrong group.

Hesjedal went under the 10km to go banner with barely 20 seconds over the Andy Schleck group being driven by Saxo Bank’s Cancellara. Nobody better to have guiding you over the cobbles!

The Contador group was closing in on the Schleck group. The Armstrong group had dwindled and would not be making up the gap to the lead group. On the last section, Armstrong went alone and dropped Popo in a bid to catch the Contador group.

With 6.5km to go, the valiant efforts of Ryder Hesjedal was quashed by the small Andy Schleck/Cadel Evans group. He latched on and off they went, all sharing the work and hammering away. Hushovd had to love this for his Green Jersey chances.

The Contador group behind was ceding a bit of time to Evans and Andy Schleck, but Vino was just drilling it to keep it close. A good day for Alberto. 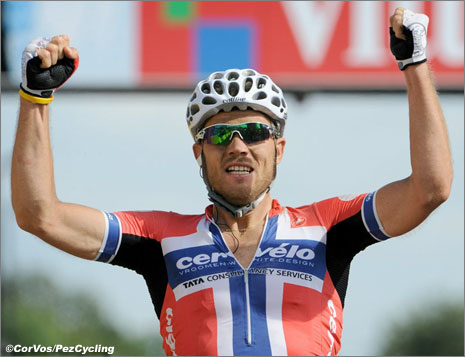 Thor Hushovd made the elite selection, waited patiently, then crushed all comers in the sprint for the big win. He’s now on top in the Points Classification.

Up front, Hushovd took the win ahead of the rest of his group, quite easily.

Vino dragged the group with a slightly gapped Alberto, who lost a minute. Way to drop your own teammate Vino. That group had Bradley Wiggins in it, too.
Armstrongs’s group rolled in 2:08 after that.

Poor Chavanel, who had what seemed like 3 or 4 bike changes over the pave, rolled in over 3 minutes back, ceding the jersey back to Cancellara.

And all at once team’s strategies changed. The time gaps will be mulled over in the hotels tonight, the routes examined. For some, the Tour was saved, for some, it was lost. For some, the matter is still very much in question.