Race Report: A hot, hot day for the Tour as it passes through the Champagne region. The Manx-man, Mark Cavendish so needed a win and today he brought home the bacon! A long break-away caught in sight of the finish (5k’s) and then the Cav train took over.

This is a typical transition/sprinters stage of 185 kilometres from Йpernay to Montargis, with little difficulty. Two 4th Cat climbs came just after the start, the Orbais l’Abbaye at 18.5 kilometres and the Mecringes after 36.5 kilometres, from then on it was an undulating run with a 90є turn half a kilometre from the finish and also three intermediate sprints along the way.

THE Break Away!
Spanish road champion, Jose Gutierrez of Caisse d’Epargne opened the action after 6 kilometres and was joined by Jurgen Van de Walle (Quick-Step) and Julian El Fares (Cofidis), they built up a nice lead and with 50 kilometres under their belt the lead was 7 minutes from an uninterested field with HTC controlling things.

Another broken collar bone in the race has taken out Amets Txurruka of Euskaltel and seven riders were fined for not signing on yesterday including Lance Armstrong.

After last night’s football result and the impending World Cup final on Sunday between Spain and Holland there could be problems in the Rabobank team as there is Oscar Freire, Juan Gвrate and honorary Spaniard; Denis Menchov in a mostly Dutch team. Gвrate told Eurosport this morning that they would all be watching the final and didn’t think there would be any trouble!

100 K’s To Montargis
After 85 kilometres the gap between the three escapees and the peloton had come down to 3:46 as the race passed through the town of Provins with its towers and cathedral. The temperature was around 33єC and the domestiques were earning their money doing the water runs back and forth to the team cars.

Spanish sports newspaper Marca is reporting that Alberto Contador will stay with Astana for the next 2 or 3 years. Alberto’s brother and representative said “the duration of the contract is not defined, but will be a minimum of 2 years”. What about this year’s Vuelta a Espaсa? “Nothing is definite with the calendar”. So maybe? According to Versus Contador visited the RadioShack bus to present watches to Johan Bruyneel and Lance Armstrong to commemorate the success in last year’s Tour de France.

Last 50 K’s
HTC were still the team on the front, but Lampre and Liquigas were well to the fore, the other teams didn’t show much interest in doing any lead work. Our three riders were still dangling out front with a lead of 2:10, but their lead was coming down all the time. 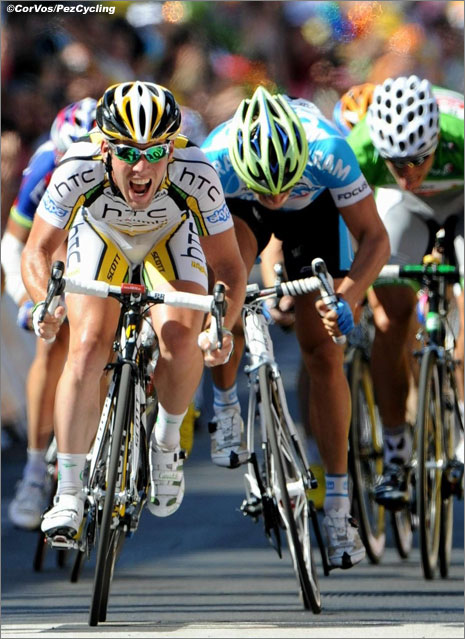 The Final Run In
20 kilometres remained and the bunch had decided that it was about time Guttierez, Van de Walle and El Fares were back in the fold. 1:15 was not enough time for the three to stay away as Cervelo lent a hand to the work of the chase, by 10 to the line the advantage was 39 seconds and the long, hot break was of 172 kilometres was over.

Guttierez jumped when he was in sight of the peloton and put his head down, he was banking on the twisty road giving him a chance, but it was not to be as at 4 out Lampre and HTC gobbled him up and it was now all down to the sprint.

THE Cav Sprint!
Garmin moved through to lead pushing into the HTC chain. Green jersey; Thor Hushovd (Cervelo) was sat six back next to Mark Cavendish. David Millar lead under the red flag into a narrow street with two lines. HTC on one side and Garmin on the other, Cav came off the wheel perfectly, fighting off Ciolek (Milram) and Sky’s Boasson Hagen, Hushovd 5th and Petacchi 8th. 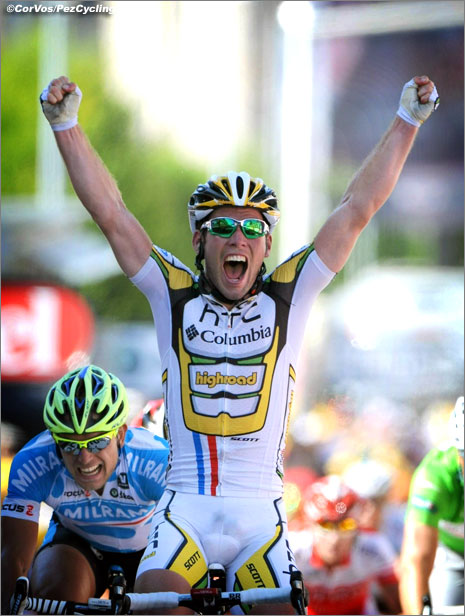 Renshaw took Cavendish through to the front and set the sprint for his man. All happy in the HTC camp today, there won’t be any tantrums at the team bus tonight, but a tearful Cavendish on the podium.

Stay Pez for all the action tomorrow and Matt on the Roadside.