Race Report: It was a long, hot ride in the saddle as today’s stage from Montargis to Gueugnon is the longest of the Tour, and the temps were soaring. These 227.5km gave a last chance for the speedsters as the hills loom tomorrow, and Mark Cavendish took his second win in as many days in a Sprinter’s duel.

Today’s ride was fairly predictable that, with just four Cat 4 climbs, it would be a sprinters’ paradise in the run into Gueugnon. And the stage was also somewhat predictable in that a small sacrificial escape went up the road early and stuck as the break of the day.

So starting at 35km to go, the reeling in began, with HTC Columbia sitting on the front, slowly ratcheting up the tempo as the chase set in earnest. 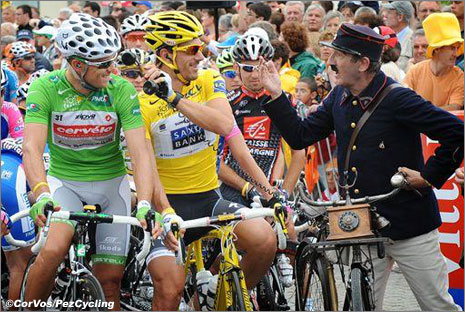 The bold gamblers, Mathieu Perget (Caisse d’Epargne), Sebastian Lang (Omega Pharma-Lotto) and Ruben Perez Moreno (Euskaltel-Euskadi), certainly had it in their minds that their freedom-clock was ticking.

The other GC favorites sat near the front as best they could, staying out of trouble flanked by their teammates. By 33km, the break’s lead had dwindled to just about a minute.

A little crash took out 4 riders, including Lars Boom, but all were quickly back up and chasing easily back into the pack.

Under the 25km banner, the sprinter’s teams started sharpening their swords as the team cars were about to be pulled out of the gap between the bunch and the break.

Rolling up the final Cat 4 climb, Mathieu Perget sprinted for the KOM points, then kept the hammer down on the descent to gap his break mates. Meanwhile, AG2R’s Champion and a BBox rider had blasted out of the main field and bridged to the break. TV time, at best, because the sprinters’ teams were starting to really fire. Perget was being brought back by the reformed break, but the peloton was also in view, inside 20 seconds. Chapeau, brave breakaways, but it’s time to die. The peloton cruelly stalked the break, waiting until just the right time to bring them back so not to see another opportunist take a shot.

Under 10km to go, and that was it for the break. But then we saw a strange movement of all the gc men right to the front – Armstrong, Basso, Astana towing Contador, Hincapie brings up Evans. An odd sight indeed so late on a flat stage, but as Lance later explained, they’d been riding into a headwind all day, and the right turn at Toulon-Sur-Arroux presented the possibility of those dreaded crosswinds – these days a factor on at least one stage of the race. But the breeze didn’t have the blow, so the echelons were a no go.

Into the finale and it’s all wide road, dead straight, and flat as a pancake. A sprinter’s delight as the group rolled on at 31 mph. Even with the speeds hotting up, the group hadn’t narrowed to a point. The group was almost completely across the road except for a little point near the front.

But at 7km to go the narrowing began. The wind was blasting the group left to right, and HTC and Garmin both had their big men drilling the pace at the front. Mick Rogers took to the front as the front end of the race navigated some traffic furniture. Then some Lampre’s came to the front. The yellow jersey was neatly placed at the front as Robbie McEwen showed himself at the front for what seemed the first time at 3km to go.

Tony Martin set the tempo then, driving the business end of things. Team Sky slipped a few riders into the mix, but the main work was being done by HTC and Lampre.

Under 1km and Garmin swooped to the front and took control. A right hander and then a quick left, with Julian Dean leading out Robbie Hunter at the very front, with the elbowing going on behind. Mark Renshaw came out of nowhere at 500m to go with Cav on his wheel and Farrar back in the mix glued to Cav. 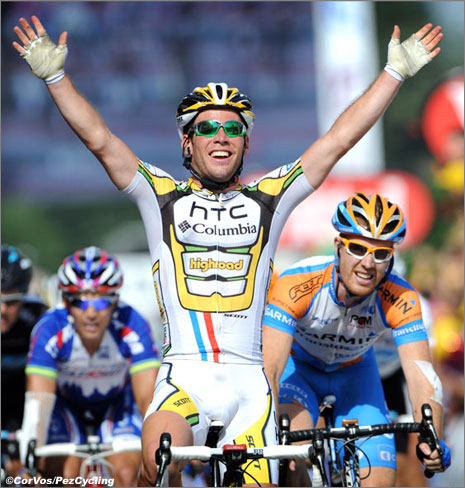 3-2-1 and the Manx Missile launched to another win just in front of Tyler Farrar. Garmin’s Robbie Hunter later explained they got split up as the jumbling started in the final meters, with Hunter dangling on the outside looking for Farrar, who’d already taken Cav’s wheel. Very impressive ride by Farrar considering he still has a fractured wrist to deal with.

Cav added: “Yesterday was really emotional, and today I’m really happy, too. As ever the boys did a great job working hard all the way through the finish and I can’t thank them enough for that,” Cavendish said afterwards. “HTC-Columbia is not a team of eight guys and me. I’m just the last rider in a nine-man unit.” 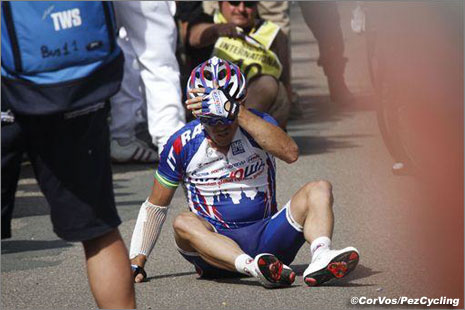 Robbie McEwen met pavement again, but this time after the line. He ran into a UCI commissaire. He was taken to the hospital, but looks to be ok.

“Michael Rogers did some really good work in the final kilometres and then I went with Mark Renshaw at the end, following him from one team’s train to another. Finally all I had to do was finish off my team’s good work, giving it everything with 200 metres to go.” 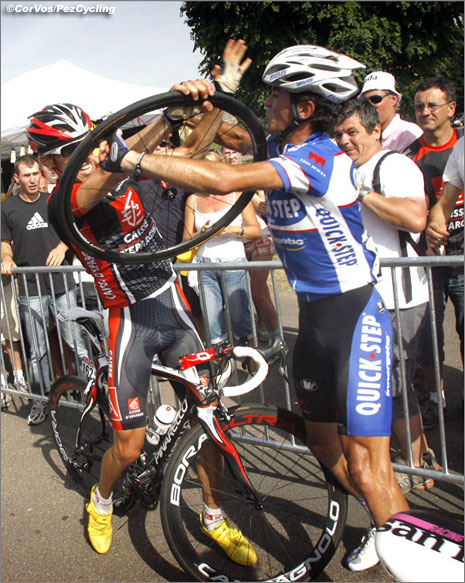 In crazier news – Carlos Barredo attacked Rui Costa at the finish. Costa was standing around, when Barredo appeared out of nowhere wielding a front wheel. No idea what happened, but there’s sure to be more to come on that one.

Cadel Evans, sitting in 3rd overall, is looking to the next few days: “I’m quite tired, but tomorrow is a new race,” Evans said. “Everything is going to start to change around tomorrow and Sunday is going to be a real shuffle-up going into the Pyrenees.” The world champion said Fabian Cancellara (Team Saxo Bank) might keep his overall lead another day. “I imagine if he’s motivated by that,” Evans said. “It depends on what the other teams want to do and if they want to eliminate him. I think Cancellara has the better chance of making it than Geraint Thomas, in reality.”