Race Report: The Quick-Step team had a plan and it came off like a dream. Mountains jersey for Jerome Pineau and stage win and Yellow jersey for Sylvain Chavanel. The Frenchman lost his lead on the cobbles, but took it back today with aggression!

Today’s stage isn’t a full-on mountain stage, more of a taster, if you will. Short compared to yesterday at only 166 kilometres, but there are six categorised climbs; one 4th, two 3rd and three 2nd Cat’s between the start in Tournus and the finish at the Ski Station des La Rousses. It’s nearly a summit finish as the line is 4 kilometres from the top of the Lamoura sitting at 1145 metres altitude. Basically the course is an up-down sort of a day. As many riders have said “the Tour starts today!” Although Lance Armstrong says it will really be Sunday for the big action. 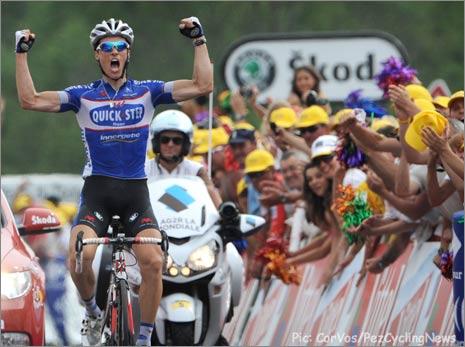 After an inspired ride through the Ardennes, Sylvain Chavanel found even more inspiration as the race entered the mountains today.

The Big Fight!
At the end of yesterday’s stage in Gueugnon there was a scuffle between Carlos Barredo (Quick-Step) and Rui Costa (Caisse d’Epargne). It seems there had been a bit of pushing in the run-in to the finish and Barredo wasn’t too happy about it. Since then Barredo said on Twitter “Perdуn a todos por mi patйtico espectбculo, sorry to everybody for my horrible spectacle!!! Sorry I’m really sad!!” and spoke to Spanish sports paper AS saying; “There were things that happened in the race, the product of stress, I realize that my attitude was not correct and I take the penalty. These things should not happen.” The penalty being a fine (400 SF), but not disqualification as was first suggested.

More bad luck for Robbie McEwen (Katusha) as he received the unwanted attentions of a chaperone right after crossing the line. McEwen later wrote on Twitter “He literally jumped in front of me and ran into me. Nothing broken.” He did start the stage.

To The Race!
The first climb (Cфte de l’Aubйpin) started at 44.5 kilometres and a group of five riders wanted to be first there, the break was instigated by Mountains classification leader; Jerome Pineau (Quick-Step) as soon as the flag dropped, he was joined by; Christian Knees (Milram), Danilo Hondo (Lampre), Ruben Perez (Euskaltel), and Samuel Dumoulin (Cofidis), best placed rider overall was German Champion Knees at 3:18.

The five leaders built up a gap of around 8 minutes before the Cфte de l’Aubйpin (3rd Cat) and predictably Pineau took the points from Knees and Perez at the summit.

The second climb was the Cтte des Granges (4th Cat) at 69 kilometres and it’s Pineau again followed by Perez and Dumoulin, in the peloton Bbox where the in charge of the chase.

The Half Way Point
Third climb of the day; Cфte d’ Arinthod (3rd Cat) is crested at the 84.5 kilometres mark and Pineau wasn’t taking any chances by taking the 3 points again ahead of Perez and Dumoulin again. The lead was down to 5:51.

Next we had three 2nd Cat climbs before the finish, the Cфte du Barrage de Vouglans or the hill above a very impressive dam. At the back of the peloton Robbie McEwen (Katusha) and Mark Cavendish (HTC) were both having problems holding the pace as up front; Pineau took 10 points with Perez second and Knees third, the gap at this point had come back to 4:17.

The second to last climb of the day is the Col de la Croix de la Serra (2nd Cat), it is probably the hardest of the day with an ascent of 682 metres in 16.5 kilometres. Bbox were still the team chasing. Off the back, and the “Auto-bus” was forming around the green jersey of Hushovd and other non climbers like Ciolek. Cavendish and McEwen were further behind. 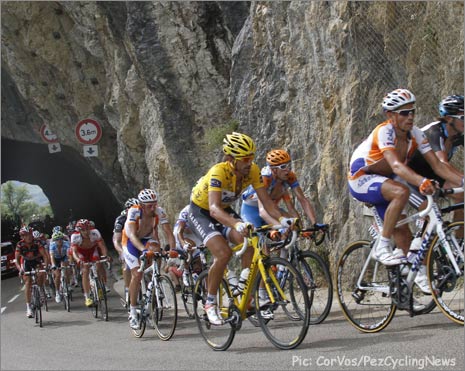 Canacellara’s days in yellow flamed out in spectacular fashion as he lost 14 minutes by day’s end.

Before the top; Voeckler (Bbox) jumped away from the front of the peloton with team-mate Gautier and was joined by Matt Lloyd (Omega), Damiano Cunego (Lampre), Mathieu Perget (Caisse d’Epargne) and Raphael Valls (Footon). The yellow jersey of Fabien Cancellara was fighting at the back, but holding on with a lot of effort.

The Last Climb
The Cфte de Lamoure (2nd Cat) starts with a steep ramp, but has no rest points until the top, and then there are 4 kilometres of flat to the finish. At the base Pineau attacked and dropped Hondo as his team-mate Chavanel jumped the others in his (Voeckler) group, he was joined by Cunego and the bunch was being towed by Hincapie which was slimming down the peloton with all the top men riding comfortably.

Chavanel caught Pineau with 14.5 kilometres to the finish, the plan seemed to be for mountains/stage and yellow for Quick-Step. Voeckler caught Cunego and they both passed a dying Pineau. Astana put their men on the front dropping many riders including Klцden (RadioShack).

10 K’s To Go!
Chavanel was still out front on his own as the split Voeckler group regrouped 50 seconds behind with Tour-virgin Raphael Valls (Footon) trying to cross to Chavanel. The Astana powered bunch was at 2:07 and Cancellara at more than 5 minutes. Armstrong was sitting three from the front with Leipheimer, Contador and Andy Schleck on his wheel, Sastre and Wiggins were also there, but with no sign of Ivan Basso, sadly Geraint Thomas (Sky) couldn’t hold onto the rear of the flying peloton.

At the mountains banner Chavanel was still free with Valls at 45 seconds and Voeckler at 1:40 and the bunch at 1:58. He had now only 4 kilometres of flat road to the stage win and the Yellow jersey.

A very aggressive ride from Sylvain Chavanel saw him come into the finishing straight with whoops of pleasure as he finished ahead of the 23 year old Raphael Valls of Footon by 57 seconds, next Garate (Rabobank) at 1:27, Voeckler 1:39 and the rest of the peloton at 1:48 with Canada’s Ryder Hesjedal well to the fore. Cancellara was well down, Evans moved into second overall, Hesjedal third and Andy Schleck fourth. Basso and Sastre lost a little time today.

Yellow and Polka Dot jerseys for Quick-Step, tomorrow is much harder than today, so stay PEZ for all the news.