Race Report: It was all thrashing, splashing, pain and redemption as the shark-toothed course took a Jaws-sized bite out of the bunch. The Colombiere, des Saises, and finally the Madeliene signaled to the peloton the belly of the Alps. Schleck & Contador lit the fuse that blew the race apart, Cadel Evans exploded big time, Sandy Casar (FdJ) won the day but yellow changed again. Read on!

Most followers of the Tour knew that the podium picture would be much clearer by the end of today. A brutal 4-mountain day finishing with the Madeleine served up bare-fisted beatings on the peloton. From the get go teams were jockeying to get their main riders up front as well as get the combination right for the breakaway. 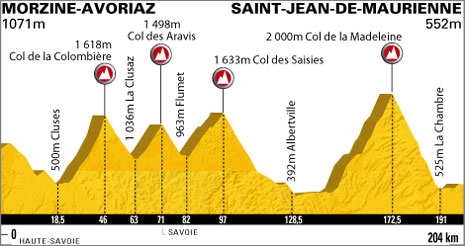 Up the Colombiere, flurries of attacks came from an active Radioshack, trying to put BMC on their back foot. The break solidified after some musical chairs, and by the Col Des Saises, it had found 8 willing members.

The break up front held its 8 and at the foot of the Madeliene, Jens Voigt (Saxo Bank), Cyril Gautier (Bbox), Luis Leon Sanchez (Caisse d’Epargne) , Jose Ivan Gutierrez (Caisse d’Epargne), Christophe Moreau (Caisse d’Epargne), Sandy Casar ( FdJ), Anthony Charteau ( Bbox), and Damiano Cunego (Lampre) were looking pretty good all things considered. Luis Leon Sanchez’s bid for yellow or at least a stage victory took its serious bid on the Col du Madeliene as Jose Guitterez turned himself inside out for his teammate, driving the pace and breaking up the 8 pack of riders. 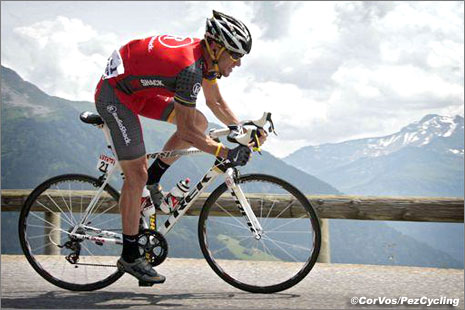 Armstrong was better in Stage 9, but still a shell of the rider who hoped to add #8 to his palmares.

At 50km to go, Vino took off in search of the group and testing the chasers not wearing Astana’s blue & yellow, blasting by some of the guys dropped from the earlier break. Seemed an odd move, but the rest of the race would dictate the fool or fancy of the move. But behind, the real race was about to begin.

BMC had done a top job controlling the pace over the first 3 climbs, but as Saxo & Astana dug in deep and drove the pace up the Madeleine, the BMC redshirts were gone from the front, and soon the yellow jersey of Cadel Evans was dropped. The elite group contained Contador, Levi, Andy Schleck, Armstrong, and Sammy Sanchez. The screws turned tighter, dropping Armstong and all the others.

Then Andy drew first blood, laying down an attack that pulled Contador clear, so soon just the two gc big boys were alone and battling shoulder to shoulder. The Astana threshing machine had done away with all the contenders save one. 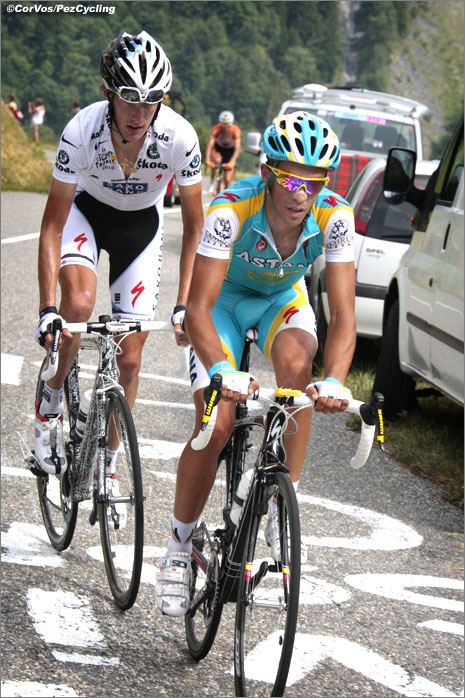 Schleck and Contador were in a class unto themselves today, but Samuel Sanchez was agonizingly close to getting in the door. The poor Olympic Champion got to within 12 seconds on the descent, then spent the final kilometers chasing in agony. Huge ride.

Almost track style infighting was taking place between Contador and Schleck until Sammy Sanchez rolled by, teeth bared in agony, making the group 3 strong now. Everyone else was dropped but if they kept up the cat-and-mouse, they just might have tacked back on.

Schleck might have sensed it and hit Contador again, which popped Sanchez – again. And again, #1, and #11 were mano a mano. Contador rode smartly, clearly having learned more since last year, matching each of Schleck’s moves but not coming over him, knowing the TT – if it were to come down to that – would be in his favor.

Andy waved for Alberto to come through, some words were exchanged. An agreement struck? Alberto came around and started pacemaking, then trading turns with Andy. Better to distance their rivals at this point.

The very front group was now down to 4 who hadn’t hit the summit yet. Andy and Alberto picked up Luis Leon Sanchez, who was nice enough to offer a bottle to fellow Spaniard Contador. Why? Who knows.

Next on the hill, but not on tv, were Rabo’s Gesinck & Menchov, Shack’s Leipheimer, and Katusha’s Rodriguez – a nice group for Levi as the Rabo’s took up the chase together.

Then came Basso, Armstrong, and Van den Broeke in a small group further down the hill, along with Vino. And well behind them, poor old Cadel had hit the wall completely. He lurched on the lower slopes, grimacing. But behind that, Wiggins was dropped like a bad habit – the self-styled Mod is just not having the Tour he’d hoped for.

Contador and Schleck then picked up the dropped Jens Voigt who, after offering his bottle to Andy, took to the front of the trip and just drilled it to help his teammate.

Is it just me, or does Luis Leon Sanchez look like the Predator? He sat at the front still, a few minutes ahead of the big names of the Tour who were bearing down on the lead group that was still at 4, and all of whom wore masks of pain. If they could reach the summit without being caught, they should get down the hill and one of the 4 would win. Sanchez is a class descender and could easily win the stage, but Cunego is almost unbeatable from a small group. And they did just that, summiting through amazingly thick crowds of screaming fans.

Jens was still destroying himself to take Andy Schleck up the hill with Contador tacked on, and he lasted just to the summit where it was lights out for the German. I think they heard him explode all the way back home.

As the descent began, Contador and Schleck traded turns, being aggressive but not too crazy. No sense risking a crash now. The boys up front looked more and more as though the stage winner would come from the quartet.

Casar, Chartueax, LL Sanchez, and Cunego were under 10km and on the flat run into home. They had enough time to think about tactics to see which of the 4 would take the win. 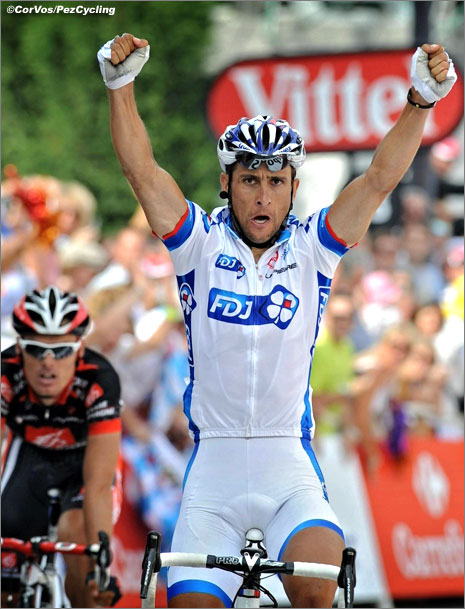 Behind, Contador and Schleck had picked up Christophe Moreau who tacked on and didn’t help with the pacemaking on the flat. They were racing to solidify the fact that this was now a two-man race to Paris, but as they drove they were pecking away at the lead of the leading 4 riders, who went under 4to go still sharing the work. The lead was just 50 seconds.

By 3km the gap was 36 seconds. Tense moments for the leaders, and the heads of state. 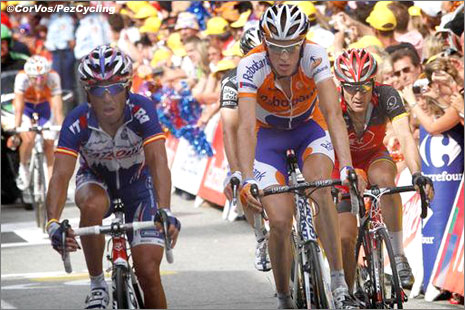 The chase group behind the Break/Alandy drove desperately to the line to minimize their losses, but they were still considerable: over two minutes.

The juncture made and Schleck to the front, driving the pace. The lead four were shocked completely. Moreau was unable to help his teammate LL Sanchez, and after the last bend as the speeds ratcheted up Sandy Casar took the best line and won the sprint ahead of Cunego and LL Sanchez.

Behind came Levi’s group with Menchov, Rodriguez Gesink, and Voight in just over 2 minutes later. 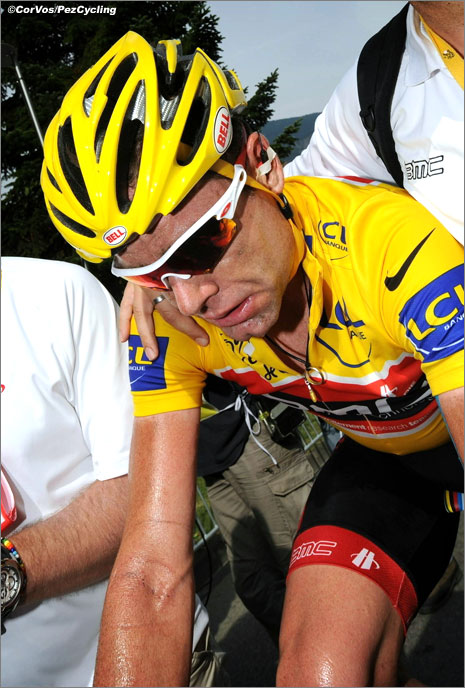 Cadel Evans braved a broken elbow through today’s stage, but lost over eight minutes. His chances at the overall are gone, but hopefully he can continue.

Armstrong’s group slipped in after that, with Basso. The looking glass had a sharper view now of who had a real chance in Paris, and certainly one would have to think Contador and Schleck were our two top places on the podium. Who would be 3rd?