Analysis St. 6 The 2010 Tour is beginning to find its stride. After a tumultuous start, the last two days have been less chaotic and we’ve seen far fewer falls and accidents. With almost a week of racing in their legs, the riders are starting to sort themselves out in terms of fitness and fatigue. Where everyone started the Tour with fresh legs and a desire to be at the front, as the race goes on, guys settle into the jobs they were brought to the Tour to complete and order returns to the peloton.

Stage 6 was a day to conserve as much energy as possible because the mountains are looming on the horizon this weekend. Conserving energy is no small feat on the longest stage of the entire race and in temperatures that again went above 90 degrees Fahrenheit, but here’s how riders aim to minimize energy expenditure while maintaining an average speed of 25mph for five and half hours (with much higher speeds during the final hour).

1. Hide: Even the newest member of the local cycling club knows that hiding in the middle of the group to stay out of the wind is a great way to minimize energy expenditure and power output during a long ride. The same is true in the Tour, and today was a day where the team leaders did everything they could to keep their noses out of the wind. And while that’s normal, the change today was that certain teammates of the team leaders, particularly the men expected to perform at their best in the mountains, were also doing all they could to hide in the draft. That left the work of setting pace to the bigger domestiques on those squads, as well as to the sprinters’ teams. 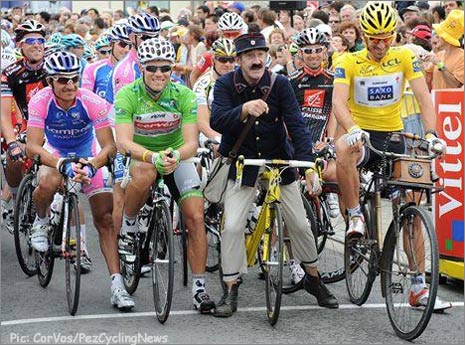 A little bit of laughter is generally considered a good use of energy.

2. Pedal Less: Pedaling is work, even if you’re not pushing at maximum power. The less pedaling you do, the less work you do during the stage, which means an easier recovery process after the stage. There’s an art to pedaling less while riding in the pack, though. Part of it is positioning. You need to be in the sweet spot of the peloton, about 20-30 riders back. In this position, you don’t have to respond as quickly to every little surge at the front of the pack, but you get through the corners fast enough that you don’t have to accelerate all that hard like the riders further back in the field. Riding in the sweet spot, you can maintain a pretty consistent effort level, stay in the draft, and only pedal enough to maintain your position.

3. Consume: Recovery and hydration have cumulative impacts on performance. There’s no meter at the end of the day that resets to zero (or full, as the case may be), but rather each rider is fighting an ongoing battle to recover from previous efforts and stay hydrated enough minimize heat stress. On extremely hard days in the saddle (Stage 3 for instance), it’s difficult to eat and drink enough because bottles are harder to come by and the intensity of racing is so high that riders don’t tend to find the time to eat as much. So on days that are not as stressful, making sure to eat and drink as much as you can – and sometimes more than seems necessary for the effort of the day – is a good idea. It’s not that you’re really stocking up on calories or fluids so much as you’re minimizing the stress that today’s effort has on your body, so your post-stage recovery can be more complete. 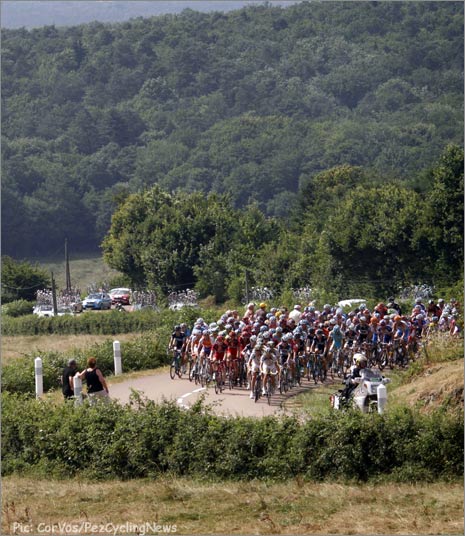 4. Pay Attention: All your efforts at conserving energy can be for naught if they lull you into a state of complacency and you lose your focus. And you have more to worry about than potential crashes. That sweet spot in the peloton that enables a rider to use less energy is no secret, so you have to ride attentively to maintain your position. With the peloton constantly shifting its shape due to small roads, narrow bridges, and roundabouts, you can go from cruising in the draft to completely exposed to the wind in no time.

Even after conserving energy today, tomorrow is unlikely to be a major showdown among the main protagonists of the 2010 Tour de France. There’s certainly a chance that Radioshack, BMC, or Saxo Bank could use their team strength to make the race hard, in hopes of catching their rivals off guard, but the climbs in Stage 7 aren’t all that conducive to big attacks. There will be some big shifts in the overall classification as some flatlanders lose time, but the gaps between the yellow jersey contenders are not likely to change dramatically until Sunday.