Analysis St. 8 For those of us who have watched the Tour de France for a long time, there are moments from each year that stick in our minds. Some are the incredible performances that win the day or crown new champions, and some are the turning points in an athlete’s race or career. Lance’s crash at the base of the Col de la Ramaz spelled the end of his Tour chances and may well be what’s remembered as his ‘turning point’.

Many times, the significance of the moment is only clear after the fact, and other times it’s immediately apparent. Watching Lance ride up the final climb to the finish, well behind stage winner Andy Schleck and new yellow jersey wearer Cadel Evans brought back memories of turning points in other champions’ careers. 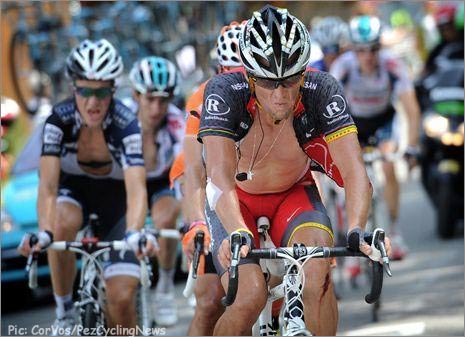 In 2003, Joseba Beloki was one of the main challengers for the yellow jersey until his dramatic crash on Stage 9. Lance narrowly avoided him and rode through a field in order to get back into the race, but on the switchback above, Beloki lay on the ground with a broken hip. The Spaniard managed to return to professional cycling, but he never regained the power that had made him a Tour de France contender.

Back in 1996, the cycling world wondered whether Miguel Indurain could become the first cyclist to win the Tour de France six times. He had dominated the race for five consecutive years by steamrolling the competition in the time trials and riding steadily in the mountains. But 1996 he struggled, and on Stage 7 he was suddenly unhitched from the lead group in the mountains. The calm demeanor and steady pedaling action were gone and Big Mig was in trouble. He lost more than 4 minutes that day, and by the time the race reached Paris, Indurain finished what would be his final Tour de France in 11th place, more than 14 minutes behind winner Bjarne Riis.

Five years earlier, not many people knew about Miguel Indurain, and it was Greg Lemond who suddenly faltered. Lemond entered the 1991 Tour de France as the defending champion, having won in 1989 and 1990. After the first long time trial of the race he was in the yellow jersey when the Tour entered the mountains. In Stage 12 Lemond finished nearly seven minutes behind the stage winner, and the following day he again finished seven minutes behind on the stage. It was at the end of Stage 13 that Miguel Indurain pulled on his first yellow jersey and began his 5-year domination of the Tour de France.

There have been similar stories throughout the history of the Tour de France, and indeed throughout the history of sports in general. Today’s story with Lance is not the same as with Lemond or Indurain because Lance is not the defending champion, but the sight of a contender off the back of the lead group was similar. The strongest athletes win the biggest competitions, and there’s very little room for error. Sometimes an athlete is undone by illness – Indurain suffered from bronchitis in the 1996 Tour de France. Sometimes it’s a mistake – Pedro Delgado famously missed his start time for the prologue in 1989, when he entered the race as the defending champion. But the Tour de France waits for no man, and there are bunch of very strong competitors who are always ready to prove they are the strongest men in the race. 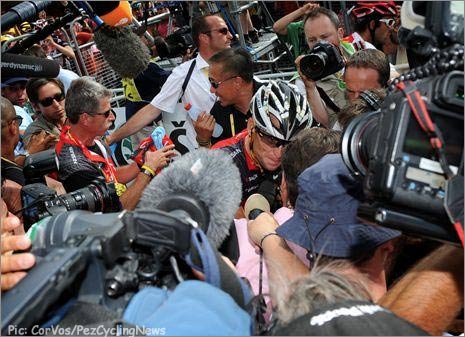 Right now, the strongest riders in the race are Andy Schleck, Alberto Contador, and Cadel Evans. Schleck won Stage 8 with a big acceleration within the final kilometer, an acceleration Contador could not match. That could bode well for Schleck in the coming stages in the Alps and Pyrenees because he needs to start the final time trial with a decent lead over either Evans or Contador if he hopes to ride into Paris in yellow. And Evans has quietly ridden himself into the yellow jersey, with a minute lead over Contador to boot!

It’s been a long time since a current road race world champion has also been in the Tour de France leader’s jersey, and this far Evans looks better than he did in the Tour last year. Contador, though, is still the man to beat. He looked good today, even if he wasn’t able to go with Schleck’s final surge. I expect Contador will launch an explosive attack of his own on Tuesday’s summit finish. And what of Lance? He’ll ride for Levi Leipheimer, who rode well in the lead group today. Leipheimer came into the Tour with great fitness as well, and he showed today that he’s one of the top climbers in the race.