Tour Coach: Booting Renshaw Too Much

Analysis St. 11: Mark Cavendish won his third stage of this year’s Tour de France, and the 13th Tour stage win of his career, but his victory is overshadowed by the race officials’ decision to disqualify Team HTC-Columbia leadout man Mark Renshaw from the race entirely. I agree that Renshaw’s actions during the sprint were wrong, but I think the officials over-reacted by kicking him out of the race.

But let’s back up and take a look at what Renshaw did to get himself removed from the Tour de France. As the final leadout man for Mark Cavendish, it’s Renshaw’s job to start sprinting at top speed about 600 meters from the finish line while Cavendish accelerates in his draft. At about 300-200 meters from the finish, Cavendish launches his final kick to the finish line and Renshaw is supposed to continue in a relatively straight line to the finish himself. All was going according to plan at the end of Stage 11 until Garmin-Transitions’ Julian Dean pulled up alongside Renshaw inside the final 600 meters of the race. 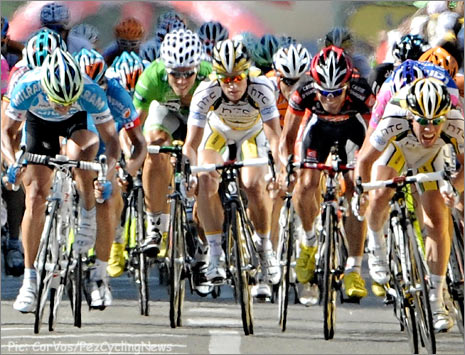 Instead of continuing forward side by side, the two leadout men made contact with each other. This in itself is not unusual or against the rules. Contact happens, and it’s usually shoulders and elbows pushing against each other. Renshaw escalated this normal situation to one that drew the attention of the race officials by repeatedly hammering his helmet into Dean’s shoulder. One tap with the helmet, OK. You won’t get in trouble for that. It will seem like you’re just keeping the other guy at a safe distance. But leaning on a rider and using your helmet as a hammer is viewed as being aggressive and unsportsmanlike.

Renshaw claims that Dean was moving over in his direction, forcing him closer to the barriers. I know things look and feel different in the heat of the moment, but from the replays I saw – and that the officials were viewing as well – it doesn’t appear that Dean was encroaching on Renshaw. What is more likely is that Renshaw knew that with Dean on his right and Garmin sprinter Tyler Farrar on Dean’s wheel, the only lane Cavendish could use to get to the finish line was to Renshaw’s left. That meant Cavendish was going to have to sprint between Renshaw and the barriers. Renshaw may not have been in any danger of being forced into the barriers by Dean, but the HTC-Columbia leadout man had to make sure his sprinter had a clear lane to accelerate through – so he opened the lane to his left by using his helmet on the guy to his right. 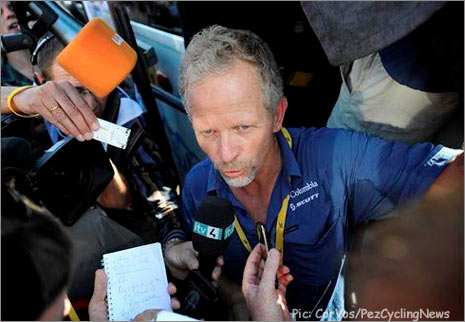 Did he go too far by headbutting Julian Dean repeatedly? Yes. Was it so bad that he deserves to be removed from the race? No. There is precedent for this in the Tour. In Stage 3 of the 2005 Tour de France, Robbie McEwen head-butted Stuart O’Grady in much the same way as they battled for the victory (they both lost to Tom Boonen). McEwen was relegated to the back of the pack, but permitted to stay in the race.

Sprints are aggressive, unpredictable, and dangerous. It’s the nature of the beast. Occasionally riders cross the line and get too aggressive, but there are a few things Renshaw didn’t do that make his conduct today worthy of a relegation, but not an outright disqualification. He didn’t take his hands off the bars to push or punch Dean (we’ve seen that before in Tour de France sprints, too). And he didn’t swerve into Julian Dean and take him across the road – which would have put the whole pack in jeopardy.

Some people are pointing to Renshaw’s move to the left after Cavendish passed him as a second instance of unsportsmanlike conduct, since it impeded Tyler Farrar’s progress toward the finish line. If anything, I’d say that was a more severe infraction than the head butting. As a sprinter or a leadout man, he was supposed to continue in a straight line – or at least if he moved off his line it shouldn’t have been in a manner that impeded another sprinter from challenging for the stage win. Renshaw opened up the lane to his left for Cavendish, and then slammed the door shut on Farrar by moving to the left. Normally I don’t like it when riders take their hands off the bars to push someone out the way, but I think Farrar prevented a potentially very serious crash by reaching out and stopping Renshaw from moving any farther to the left.

Perhaps the race officials were taking both actions into account when they decided to kick Renshaw out of the 2010 Tour de France, but I still believe they over-reacted and handed down a penalty that was too harsh. Then again, there aren’t very many other choices. Relegation is not a deterrent or a penalty for a leadout rider because it doesn’t matter where he finishes as long as his teammate wins. You could levy a fine, but fines at the Tour de France (for feeding when you shouldn’t or hanging on the car, etc.) are pretty much the cost of doing business. And it’s not like you can suspend a rider for one day – like they do in baseball or basketball – or say he has to ride at the back of the pack for the whole stage. So even if disqualification is too harsh for the offense, the other options are essentially meaningless. Who’s the real loser in all of this? Mark Cavendish. He won today’s stage, but in the process lost the man who has led him to three stage wins this year. He’ll miss Renshaw in the remaining sprint finishes, especially the final one on the Champs Elysees – which Renshaw helped him win last year.

• See the replay from Versus here.