Analysis St.13 Andy Schleck is being stalked like a gazelle on the African plains. Yes, he’s in the yellow jersey and he has a strong team, but Alberto Contador is lying in wait, ready to pounce and snuff out Schleck’s dream of winning the 2010 Tour de France. But anyone who’s watched National Geographic shows knows that the gazelle might be at a disadvantage, but he doesn’t always lose.

This evening Paul Boudreau joins us to talk about the upcoming Beverly Gran Prix. Frankie Andreu who is currently in France providing daily Tour commentary on Versus, has sent us a couple of excellent and very insightful reports from France. A special feature focuses on a proposed bicycle ban in Missouri. Being Tour time, our regular expert contributors Chris Fontecchio (Podium Cafe 5), Chris Zigmont (Tech Talk) and Richard Pestes (Pez Sez) will add their expert commentary on the great race as it now heads through the Pyrenees.

Remember that as a live show you can call in at any time during the webcast with questions or opinions. The call-in # is (917)889-2569. Find us here: Bike Talk Radio Show

Contador has been showing the confidence and swagger common to champions, but I don’t know that I agree with his assertions that being 30 seconds behind Andy Schleck isn’t a problem. Both Schleck and Contador are explosive climbers, able to accelerate faster than pretty much any other riders in the race. They showed that when they escaped from everyone on the Col de Madeleine. But they’ve also showed this year that neither one of them has a clear advantage over the other. One day Shleck can out-accelerate Contador, and the next it’s Contador’s day to excel. And at the end of the battles, at least thus far, the differences have been about 10 seconds in either direction. 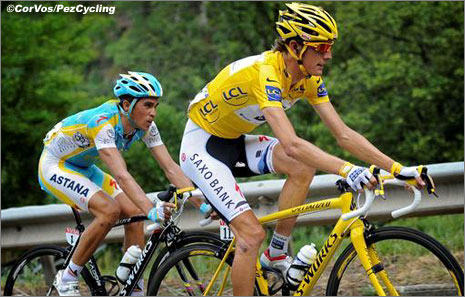 Part of the reason Contador seems to be comfortable with the situation is that he’s confident he can erase a 30-second deficit to Schleck in the final time trial on Stage 19. And he’s right. If last year’s results are any indication, and indeed the prologue from this year’s Tour, Contador has a big advantage in the final time trial. But it’s a dangerous game to bank on a perceived advantage at a later stage of the race, because you never know when something could go wrong.

In the third week of the Tour de France, it’s always better to be in the yellow jersey as opposed to chasing it. Having the jersey gives you options; you can attack to gain more time if you feel good and the opportunity is there. Or you can ride conservatively and mark your rivals if you’re not feeling great. On the other hand, when you’re chasing the yellow jersey you have to attack to make up time and you have to be ready to respond to attacks. And the pressure to perform increases with every passing stage in the Pyrenees, because you’re running out mountain climbs you can use for big attacks. 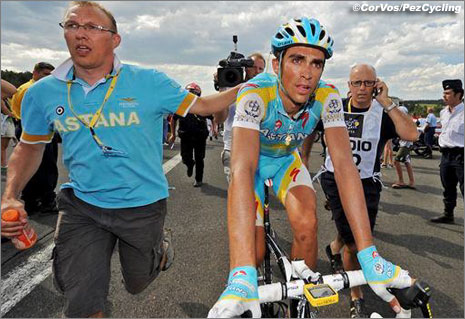 Contador is still the odds-on favorite to win the 2010 Tour de France, but he has to be careful not to let bravado put him in a dangerous situation. As great as he and Schleck are on the climbs, they both have a limited number of big accelerations in their legs. Schleck knows this about Contador, and knows that in order to beat him he needs to have one more acceleration in his legs. That’s it. That can be the whole race. Within the span of 10 minutes of hard attacking on a major mountain climb, you can turn a rider who feels like a million bucks into a wobbling wreck, and even if you’re one attack away from destroying yourself, you may be able to do enough damage to open up a big time gap. It’s hard to imagine that Schleck will be able to crack Alberto Contador, but this is the third week of a very hard and very hot Tour de France. The margin between feeling great and having a terrible day is growing very thin. 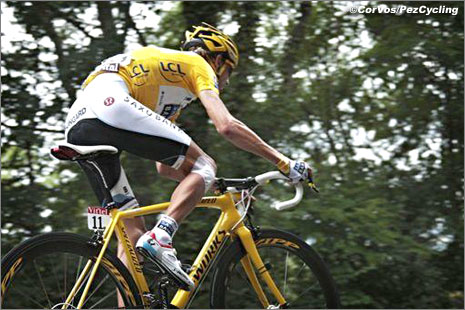 When the cheetah gets his teeth around the throat of a gazelle, dinner is served. Contador has the advantage and Schleck may look like he’s the hapless gazelle in this scenario, but Contador still has to actually catch Andy Schleck before he can win the Tour de France. And that’s not as easy as it seems. Just ask the cheetah. Even with unmatched speed, big teeth and sharp claws, the cheetah misses more often than he kills.

Tour de Pez: A Day For The Sprinters?