Analysis St. 7 The French are having a pretty good Tour, and I suppose they wanted to give their fans another good show before being overshadowed by the overall contenders. After all, France still doesn’t have a rider capable of riding into Paris in the yellow jersey. So when BBox Telecom missed the breakaway today, their team manager sent them to the front to chase. That brought the breakaway close enough to the peloton for French National Champion Thomas Voeckler to attack for a possible stage win.

Not to be outdone by his countryman, Sylvain Chavanel (winner of Stage 2) set off in pursuit. Chavanel had a great ride and won the stage, and took the yellow jersey for the second time in this year’s race, but the Battle of the Frenchmen – along with the heat – also made the stage much more difficult than many riders had anticipated.

Although none of the yellow jersey contenders lost time to each other today, most only had one or two teammates with them on the final climb. That’s somewhat unusual for a climb that’s not terribly difficult (the climb to Station des Rousses is only 5% average grade), but it’s important to look at the situation in the context of the rest of the Tour de France. The relatively shallow grade of the final climb today meant there was little risk of an attack from one of the yellow jersey contenders. All that was really necessary was to ride a fast tempo and stay in the group. Having a teammate in the group with the team leader is a good idea just in case there’s a problem, but you don’t need to ask the rest of the team to burn their energy to stay with that group. 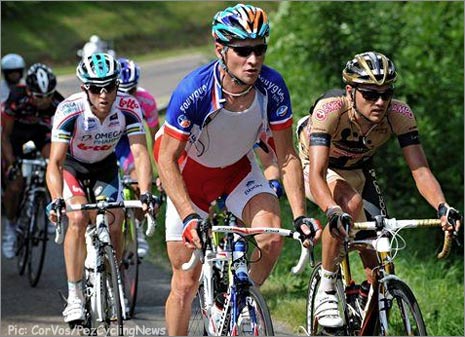 Thomas Voeckler honored his French Champ’s jersey by attacking late in the race.

Tomorrow’s stage will undoubtedly push the domestiques to their physical limits, and beyond them. The Col de la Ramaz is a hard climb and the pace is likely to be high as the yellow jersey contenders probe each other for weaknesses. And the final climb from Morzine is downright hard, at any pace, but it’s going to be even more difficult because it’s the first major climbing showdown among the pre-race favorites. Telling the team helpers to take it easy today was a smart move, because they’re going to need their strength for tomorrow.

The 2010 Tour de France is heavily weighted toward the Pyrenees in the third week, and lots of riders and journalists have been downplaying the significance of the Alpine stages. In large part, they’re right. The stages in the Pyrenees are likely to be more decisive than the stages in the Alps, but Sunday and Tuesday’s stages shouldn’t just be written off as a footnote to the race.

The first mountain range of the Tour is where you build the foundation for victory. First you have to be present and on the right side of all the major selections to show you’re one of the handful of riders to be reckoned with. By being present and accounted for you’ll also distance yourself from the lesser challengers, who may be virtually eliminated from contention by the end of Stage 9. And the first mountain range also provides the opportunity for building a lead in the standings, accompanied by an even bigger psychological victory. 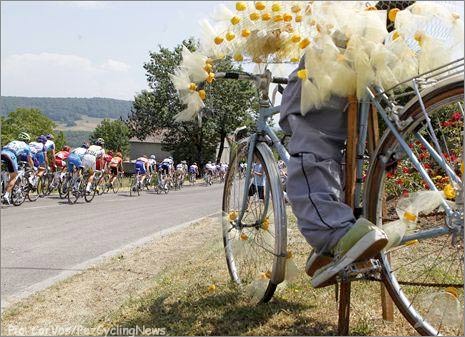 If you want to send the message that you’re the man to beat, a decisive attack in the first set of mountain stages is a very good way to do it. The sight of a rival convincingly riding away in the mountains can be demoralizing, and it can have a lasting impact. When you do it early in the race, it gives everyone the sense they can expect more of the same for the rest of the Tour (even if you’re bluffing), which sometimes makes your rivals think twice about attacking you.

If the lead group of yellow jersey contenders is all together at the bottom of the final climb, I fully expect Alberto Contador to attack on the final climb of Stage 8. Right now there are too many riders who are close to him on the overall classification and he’ll take the opportunity to ‘thin the herd’. The big question is how well the others will respond. Cadel Evans is better than he was in 2009, and so is Lance Armstrong. Andy Schleck was the only man capable of accelerating with Contador last year, but his pre-Tour preparation wasn’t as perfect as in 2009. And what of the dark horse in the periphery, Ivan Basso. He’s looking to make up some serious time in the overall race for yellow, and the mountains are where he overcame a big deficit to win the Giro d’Italia earlier this year.

Stay tuned boys and girls, because whatever happens, it’s going to be exciting to watch!