Tour Coach: It’s All About Tomorrow

Analysis: Throughout the Tour de France, riders and directors and commentators – myself included – throw around the phrase, “But there’s plenty of racing left to be done.” Typically it’s used when someone crashes or loses time, or when someone tries and fails to gain time. But at a certain point, there isn’t.

And that’s where we are now.

If Andy Schleck doesn’t drop Alberto Contador during Stage 17 tomorrow, no one will be able to say, “But there’s plenty of racing left to be done.” Time’s up, the day is here, and you either get it done now or it doesn’t get done at all (of course, here I have to also add the obligatory, “barring accident, natural disaster, etc.”). 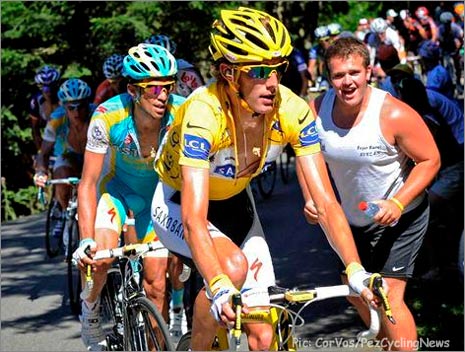 When you back a fierce competitor into a corner, you can never know what to expect. Up until this point in the 2010 Tour de France, Alberto Contador and Andy Schleck have seemed to be complete equals in the mountains. They have both attacked several times, and neither one has been able to open up a significant gap over the other. But up until now there was always another day available to attack each other, so they crossed swords a few times and then called a truce for the day. Now they’ve come to the final opportunity, the last chance to put some real distance between them on the slopes of a mountain.

Andy Schleck says we haven’t seen his full strength yet, and I tend to believe him. One thing that got lost in the controversy about whether Alberto Contador should have waited for him on Stage 15 was that after Schleck remounted his bike, he closed a big gap to Contador before the summit of the Port de Bales. Estimates are that the gap between Schleck and Contador grew to between 30-45 seconds at its largest, and Schleck crossed the summit only 13 seconds behind Contador. And I believe the incident happened within three kilometers of the summit. Had there been one more kilometer of climbing, I think Schleck and Contador would have started the descent together. Schleck’s speed there indicates to me that he may indeed have some serious power in reserve for Stage 17, which ends on the top of the Tourmalet and not after a long descent like Stage 15. 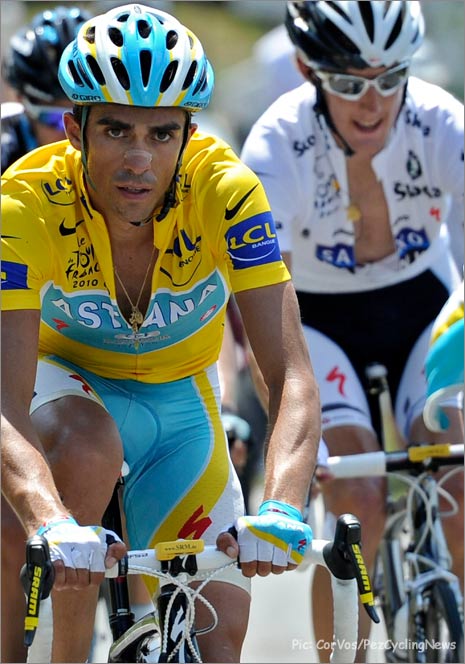 Alberto Contador has more cards to play than Andy Schleck. He is in the yellow jersey – even if it’s only by 8 seconds – which means that all he has to do is finish on Schleck’s wheel atop the Tourmalet tomorrow. Technically he doesn’t have to attack even once, because the other card he has to play is his superior record against the clock in individual time trials. Last year Contador took 1:44 out of Schleck in 40.5 kilometers in the final individual time trial. This year, the Stage 19 time trial is 52 kilometers long.

But Contador has won the last four Grand Tours he’s entered, he prides himself on his abilities in the mountains, and he hasn’t won a stage yet in this year’s Tour de France. He might be able to win the Tour without winning a stage, or he might win the time trial (like he did last year) and win the overall, but I find it hard to believe he doesn’t want to win on the Tourmalet tomorrow. Thus far in the Tour de France, he is a defending champion who has been playing second fiddle in the Andy Schleck show. Even the times he’s tried to out-ride Schleck, the stories have worked against him: when he finished second in Mende to Joaquin Rodriguez, he was criticized for chasing down his teammate, Alexander Vinokourov (a criticism I didn’t think made much sense since Contador is the team leader). And then there was the debacle of Stage 15 when Schleck dropped his chain.

If for no other reason than to figuratively slam his fist on the table and declare himself the worthy wearer of the yellow jersey, Alberto Contador will try to win Stage 17. And that, in itself, could prove to be his biggest vulnerability. If he doesn’t have it in his legs to beat Schleck on the Tourmalet and he refuses to admit that to himself in the heat of battle, he risks pushing himself over his limit and losing a big chunk of time – and with it possibly the entire Tour de France. It’s not in a champion’s nature to race conservatively because they want to win and prove they are the strongest, but sometimes a champion is better served by racing with his head instead of his ego.

No matter who you are rooting for, race fans across the globe will be on the edges of their seats as the Tour de France reaches the base of the Col du Tourmalet tomorrow. The time for poker faces and tough talk are over, and it’s time for the two top men in the Tour de France to put their cards on the table.