Tour Coach: Peloton Unites to Save Its Own Skin

Analysis St. 2: When you’re in the peloton, it’s immediately clear that in addition to competing against each other, you’re also responsible for keeping each other safe. Often, both your immediate fate and length of your career depend on the men around you, and vice versa. That’s why riders call out and point out obstacles in the road, and it’s why on days like today, they sometimes neutralize the competition.

Early in Stage 2 there were a few crashes, but nothing too out of the ordinary for a stage early in Week 1 of the Tour de France. It wasn’t until the slippery descent from the Col de Stokeu that things turned from risky to downright dangerous. After the stage, riders throughout the peloton were still stunned by how slippery the rain-slickened descent of the Stokeu had been. Riders hit the deck, motorbikes crashed, and the peloton splintered into small groups. The logic and correctness of what happened next is likely to be debated, at least in some circles, for a long while. 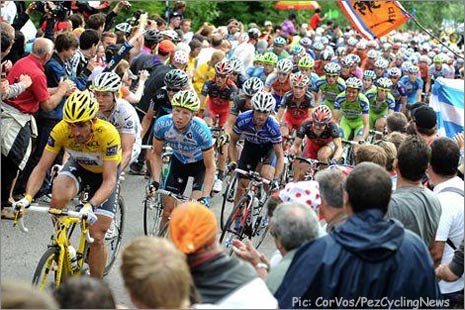 After the mass crash on the Stockeu descent, yellow jersey Cancellara called a truce on the day’s racing.

For me there’s no debate. The peloton acted responsibly, and under the leadership of yellow-jersey wearer Fabian Cancellara, the front group rode a steady tempo to allow those who could rejoin the group to do so. They didn’t slow to a crawl or stop and wait, and the groups that rejoined – including Cancellara’s teammates and pre-Tour favorites Andy and Frank Schleck – had to work to get back into the pack. But no one responded to the news of a crash by launching an attack or putting their men on the front to make sure fallen riders didn’t make it back to the main group.

Sylvain Chavanel, who was out in front in a breakaway all day, continued in his pursuit of the stage win – a decision no one in the peloton would have had any problem with. It was the decision of the peloton to turn off their pursuit of Chavanel, knowing full well what the consequence would be. No one knew it more than Cancellara himself, who gave up the yellow jersey in an effort to preserve his teammates’ chances of winning the Tour de France and keep the rest of the peloton – himself included – safe.

Some will undoubtedly criticize the riders for backing off the throttle instead of capitalizing on the opportunity to gain time over rivals. They will point to the fact that bike racing has inherent risks, and that the riders have known about this course for nearly a year. The conversation is likely to get even more complicated tomorrow if there’s a crash on the cobblestones and the peloton does not wait for fallen yellow-jersey contenders to rejoin.

In the end, though, the riders make the race. We’ve all seen mountain stages that hold the potential to be decisive and are instead raced conservatively. To cite a specific example, in the Tour two years ago, Cadel Evans would have liked a transitional stage after the final mountain stage to be a relaxed day on the bike so he could recuperate for the final time trial the following day, and normally it would have been, but that day the peloton decided to race full-gas all day. And in the Giro d’Italia last year, the peloton neutralized the Milan stage that contained a circuit which included trolley tracks running in the same direction the riders were traveling, because they decided it was too dangerous. 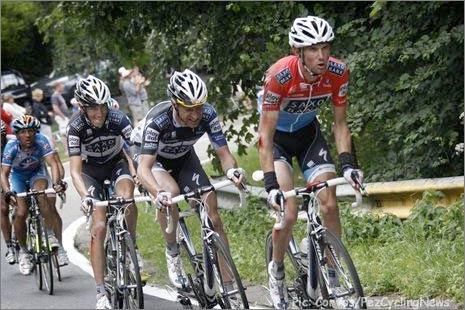 Although Andy Schleck looked in bad shape after his crash, he recomposed and chased back with his teammates.

On any given day, the riders decide how a race will be contested. And season after season they give us incredible, courageous, and daring performances. They accept the significant risks associated with racing, and they bleed and break their bones and come back for more. So when a group of more than 190 professional riders decides to neutralize the competition in the interest of fairness and their own safety, they don’t do it on a whim.

Criticize them from the comfort of your couch or from behind a laptop in your climate-controlled office if you want, but having raced through the Ardennes region in the rain as a professional cyclist myself, you won’t hear me begrudge them their decision today. I’m a fan of hardman racing just like anyone else, but if you expect racers to accept the risks inherent in professional road cycling, you also have to respect their right to occasionally draw the line.

• Chris Carmichael is Founder and CEO of Carmichael Training Systems and coach to Lance Armstrong. In 2010, CTS is celebrating its 10th Anniversary of being the premier destination for coaching, camps, and performance testing. For information on what CTS can do for your performance, visit www.trainright.com, call 866-355-0645, or find us on Facebook at www.facebook.com/carmichaeltrainingsystems.