Analysis St. 00 Prologues are extremely difficult, and poor weather just adds to the tension, risk, and difficulty of the day. Champions rise to the occasion, and Fabian Cancellara yet again showed everyone why he’s the World and Olympic Champion in the Time Trial. Lance Armstrong and defending Tour de France Champion Alberto Contador had very good rides as well, and, like Cancellara, they benefitted from competing on roads drier than some of their competitors who rode earlier in the day.

Since the conditions changed so much between the early and late parts of the day, and because some teams put their GC hopefuls in the first third of the start list instead of the last third, it’s somewhat difficult to use today’s prologue as an indication of how the Tour favorites stack up against each other. 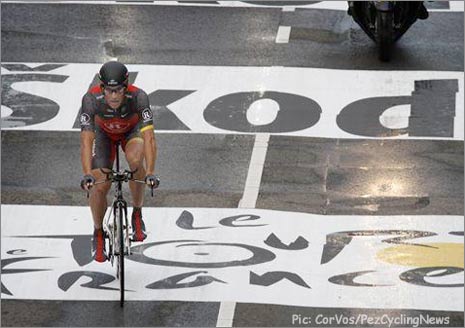 Although the finish line was still wet, the late starters enjoyed much dryer roads.

The results today were obviously impacted by the riders’ fitness levels, but the road conditions changed from treacherous to nearly-dry within the last hour of the stage, and that impacted not only the physical limitations of how fast riders could get through the turns, but also the level of aggression they were willing to display on the course. Viewed in that light, Bradley Wiggins of Team Sky did quite well today. He rode when the weather was at its worst, but still managed to go just one second slower than Ivan Basso of Team Liquigas, who competed on much drier roads near the end of the start list. Both men, however, lost more than 30 seconds to the highest-placed pre-Tour favorite, Lance Armstrong.

In all, there are pre-Tour favorites scattered all over the leaderboard tonight, which is unusual because after a 9-kilometer prologue you would expect them to be reasonably-well grouped in the top third of the 197-man field. But since it’s impossible to decipher whether a particular rider’s result today was due to fitness, caution, or weather, the prologue of the 2010 Tour de France didn’t provide the insight we normally get into the relative preparedness of the pre-Tour favorites. 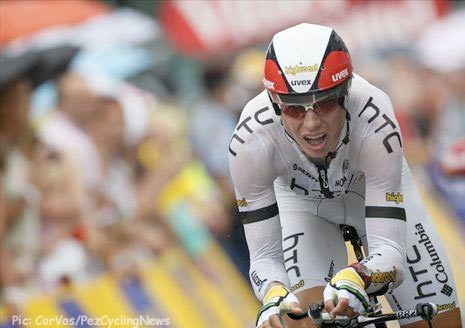 Tony Martin ripped it in the early going, then watched his time stand until only the final few riders had a chance to best him.

What we do know is that Alberto Contador and Lance Armstrong are in great shape because they raced in identical conditions, both finished within the top 5 on the stage, and they were only separated by 5 seconds. Lance scored a nice psychological victory by finishing ahead of Contador, and it’s always better to be ahead rather than behind, but in the bigger picture all it means is that they are both fit and ready to compete for the next three weeks. However, I’d hesitate to say today’s result means they – or Cadel Evans, who also scored a very good ride – are head-and-shoulders above any other pre-Tour favorites. They will benefit from times that were about 25-45 seconds faster than some rivals today, but it would be premature to draw conclusions about the form or fitness of Andy Schleck, Ivan Basso, Bradley Wiggins, or Christian Vande Velde.

There were some other notable performances, and it’s hard to mention them all, so I apologize if I overlook some important ones. But briefly, Levi Leipheimer, Janez Brajkovic, and Andreas Kloden put in solid rides for Radioshack, giving the team four men in the top 20. And Tyler Farrar rode himself into a position where he could capture the yellow jersey later this week! He’s the best-placed sprinter in the race, by far, and he has a proven ability to handle himself on the rough-and-tumble roads of Belgium and Northern France. Another great performance came from American Brent Bookwalter. He sits in 11th place after the prologue, he beat his team leader (Cadel Evans, who’s no slouch in time trials), and you have to remember this is the guy who came within 2 seconds of wearing the pink leader’s jersey in the Tour of Italy. And last but certainly not least, what about that ride from Tony Martin? He’s a young racer with a ton of potential and some great performances already to his credit. His time stood most of the day, and it was only Cancellara who managed to beat him.

Today was a dramatic start to what’s sure to be a dramatic and thrilling race. And now that there are some decent time gaps between the favorites already, the action should be heated right from the beginning.

Tour de Pez: Around And Around In Rotterdam!