Analysis St. 19: Perhaps more than usual, the weather played a significant role in this year’s Tour. Today it was the wind that led to some unusual results in the final time trial. Normally, the standings for the final individual time trial of the Tour feature time trial specialists and top-10 finishers in the overall classification. But today most of the men fighting for positions on the podium finished minutes behind stage winner Fabian Cancellara and further down on the leader board than expected.

The course for Stage 19 was quite flat but ran in a northwesterly direction toward the Atlantic Ocean. The winds were relatively calm for the riders who started early in the day, but increased significantly as the afternoon wore on. Riders like Alberto Contador, Andy Schleck, Sammy Sanchez, and Denis Menchov had to fight their way through a stiff head-cross wind that wasn’t nearly as strong a few hours earlier. That reduced their speeds and put their finishing times in the mid-30s to mid-40s instead of the top 20 on the stage. 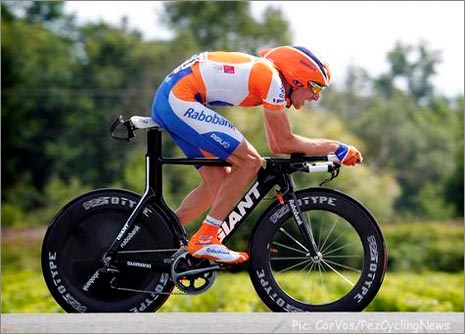 The wind makes Denis Menchov’s ride all the more impressive. He was the fourth from final rider to leave the start house and he managed to finish 11th in the time trial and take two minutes out of Sammy Sanchez. He was the top-placed rider of anyone in the top 10 overall, and his performance moved him ahead of Sanchez and into third place overall. For years, Menchov has been talked about as a potential Tour de France winner, but in each of his previous attempts at the race he’s cracked and fallen out of contention. This year he quietly rode a nearly-perfect race. He wasn’t able to stay with Andy Schleck or Alberto Contador in the mountains, but with the 2009 Giro d’Italia victory in his back pocket and a really strong performance in this year’s Tour de France, he could very well return to the Tour in 2011 as a very serious contender for the overall victory. This would be especially true if the 2011 edition of the race has two long individual time trials and/or a team time trial. 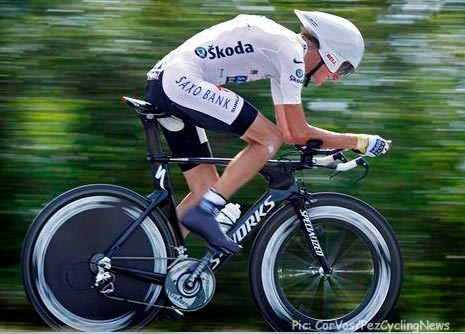 Andy Schleck knew coming into today’s race against the clock that he needed to have the time trial of his life in order to take the yellow jersey from Alberto Contador. And for nearly 2/3 of today’s 52-kilometer test, it appeared he might just pull it off! In time trials over 50 kilometers, fatigue catches up with everyone, and often it’s the rider who slows down the least who ends up winning (or at least beating his rival). The wind and the effort caught up with Schleck over the final 10 kilometers today and he very gradually slipped further behind Contador’s time. But considering that Schleck finished 1:44 behind Contador in a 40.5 kilometer time trial last year, Schleck’s performance today was phenomenal. 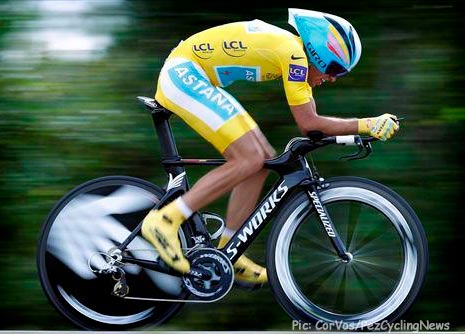 What’s interesting is that the route and the weather in this year’s Tour de France may have helped perpetuate the idea that Contador had a bigger advantage in today’s time trial than he actually had. Schleck lost 42 seconds to Contador in the opening prologue of this year’s Tour de France, and that was only an 8.9 kilometer effort. That supported the idea that Contador was greatly superior to Schleck in the time trials this year – as he was last year. But Schleck rode much earlier in the day back on July 3, when the course was quite wet. Contador rode last as defending champion, and by that time the roads were much drier. It was difficult to tell whether the 42-second difference was due to weather or ability, or some combination of both. And often there’s a long individual time trial in the first week of the Tour, but this year that stage was absent. As a result, there was no chance for Contador – or anyone else – to gather any additional information about Schleck’s abilities against the clock before today’s stage.

After last year’s Tour, Schleck no doubt knew he needed to work on his time trial. He’s a young rider, just 25 years old and three years younger than Contador, so it’s no surprise that he was able to make a significant improvement in his time trial abilities from last year to this year. There’s also no doubt that the chance to take the yellow jersey off Contador’s back today provided immense motivation, perhaps more so than last year when the two riders entered the final time trial separated by 2:26 (a gap Schleck knew to be unassailable).

But I have a hunch that Schleck’s result today was not an anomaly. I don’t think he pulled a once-in-a-lifetime effort out of his body today, but that he’s significantly narrowed the gap between himself and Alberto Contador in terms of time trials. And if Andy Schleck continues to improve in the mountains (he and Contador were equals in the mountains this year, where Contador could accelerate away from him last year) and in the time trials, he could very well beat Contador in the 2011 Tour de France.