Analysis St.14: Stage 14 of the 2010 Tour de France was relatively strange. Andy Schleck and Alberto Contador are essentially riding a different race than everyone else in the peloton, and they seem to care only about each other.

This evening Paul Boudreau joins us to talk about the upcoming Beverly Gran Prix. Frankie Andreu who is currently in France providing daily Tour commentary on Versus, has sent us a couple of excellent and very insightful reports from France. A special feature focuses on a proposed bicycle ban in Missouri. Being Tour time, our regular expert contributors Chris Fontecchio (Podium Cafe 5), Chris Zigmont (Tech Talk) and Richard Pestes (Pez Sez) will add their expert commentary on the great race as it now heads through the Pyrenees.

Remember that as a live show you can call in at any time during the webcast with questions or opinions. The call-in # is (917)889-2569. Find us here: Bike Talk Radio Show

For the most part, they are right to be most concerned about each other, as they are both more than two minutes ahead of Sammy Sanchez and Denis Menchov in third and fourth places, respectively. But I can’t remember the last time I saw the yellow jersey in the Tour de France come to a near standstill on a climb to a summit finish, just to mark one rider.

Denis Menchov was smart to take advantage of the situation and get on with the racing; if Schleck and Contador are too busy watching each other, he and Sammy Sanchez might be able to ride themselves back into a position to challenge for yellow.

It’s actually highly unlikely that Sanchez or Menchov will catch Schleck and Contador napping to the point where either man moves into second or first place in the overall classification. But attacking the group of contenders while Schleck and Contador were having their own private battle was a smart move. Menchov started the day in fourth place and needs to make up time on Sammy Sanchez to move into third place. Robert Gesink, Jurgen Van Den Broeck, and Levi Leipheimer are also in the running for the third step of the podium in Paris. 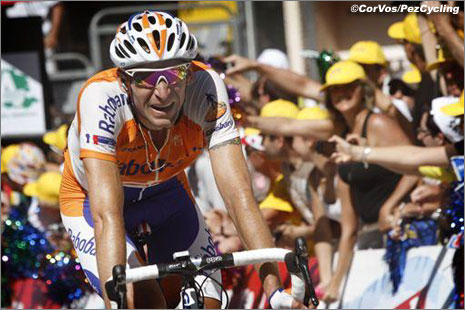 Of them, Leipheimer is probably the best time trial rider, but not the best climber, so Menchov and the others were certainly motivated to keep the pace high once Leipheimer was detached from the back of the group. Gesink is the best pure climber of the podium contenders, so it’s essential that he stays with the others – or ideally gains time over them – in the mountain stages before the final time trial. Menchov, Van Den Broeck, and Sanchez are great all-around riders, with Menchov having the top Grand Tour credentials (he won the Giro d’Italia in 2009). Sanchez is the 2008 Olympic Champion and seventh place finisher of the Tour de France that year, and Van Den Broek finished 15th in the 2009 Tour de France.

In the end, though, a stage that could have blown the race wide open ended in an almost complete stalemate. Looking at the result sheet today, you might conclude that the lead group had ridden the final climb at a fast and controlled tempo, and only challenged each other in the final kilometer. In reality, there was plenty of action, but virtually none of it was productive – except to prove that the top two men in the Tour are extremely evenly matched, and so are the 3-4 men battling for third place. 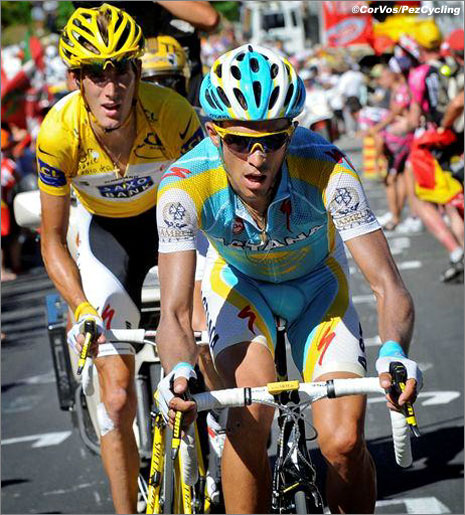 But all of these accelerations do have a point, even if they were not particularly productive today. Leipheimer has said he can’t respond to more than a handful of accelerations, and the same is true of most of the riders. As the days go by, and there are three more hard days in the Pyrenees, someone is going to reach their limit and fail to respond to a strong attack. But unlike years past, it’s not going to be just one massive acceleration and the race is over.

This year it’s going to take a gradual softening up of the competition before one or more of the contenders grows vulnerable. When that attack finally happens, it will be the one that makes the highlight reels, even though it will only be possible because of the groundwork laid today and perhaps tomorrow.

• Chris Carmichael is Founder and CEO of Carmichael Training Systems and coach to Lance Armstrong. In 2010, CTS is celebrating its 10th Anniversary of being the premier destination for coaching, camps, and performance testing. For information on what CTS can do for your performance, visit www.trainright.com, call 866-355-0645, or find us on Facebook at www.facebook.com/carmichaeltrainingsystems.

Tour de Pez: The View From The Pailheres