Analysis St. 1 There was an instant in the final kilometer of Stage 1 that gave me a horrible flashback to Stage 1 of the 2003 Tour de France. It was the moment I saw helmets rise up and then plummet back down, as riders ran into and over a wall of their fallen comrades. Back in 2003, a similar crash in the final kilometer stopped the entire peloton, and somewhere in the pileup Tyler Hamilton cracked his collarbone. As in 2003, Lance Armstrong escaped uninjured, and it remains to be seen whether today’s crashes will force anyone to leave the Tour after just one stage out on the open road.

Perhaps the unluckiest rider of the day was Garmin-Transition’s Tyler Farrar. He managed to avoid a fall with about two kilometers from the line which took out Oscar Freire and Mark Cavendish. Then he was ahead of the crash that blocked the whole width of the road in the final kilometer. He was still in the hunt when a rider from the AG2R team collided with his rear derailleur. 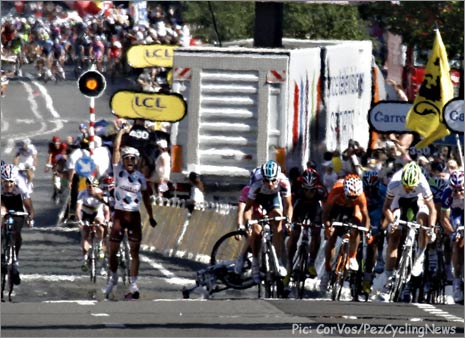 Crash, crash, and crash again, this opening road stage was one of the most crash-filled yet.

Tyler managed to stay upright, but it’s difficult to continue sprinting when you’re rear derailleur gets sheared off and you’re dragging a second bike down the road. There aren’t that many opportunities for sprinters in this year’s Tour, and it’s a shame that today’s escaped him. Alessandro Petacchi, a rider who once dominated bunch sprints, made it through the melee to take the stage win, much like he did in a recent crash-marred sprint in the Tour of Switzerland.

Unfortunately, crashes are an expected feature of the first few days of the Tour de France. The true sprinters are all fresh and eager to get a stage win, and there are second-tier sprinters who feel strong enough this early in the race to throw their hats in the ring as well. Add to that the team leaders who all want to be near the front to stay out of trouble, and you simply have too many riders trying to squeeze into a very limited amount of real estate.

But although crashes were expected, the crosswinds that the riders and directors anticipated never really materialized. There was some wind out on the course, but the ripping crosswinds that so frequently rake the coastal areas covered in today’s stage were not that severe. That was good news for Team Astana, as heavy crosswinds were viewed as a potential opportunity to put defending champion Alberto Contador into difficulty. 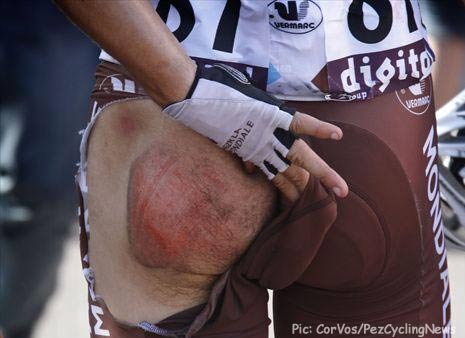 The Saxo Bank and Radioshack teams, among others, would have been looking for the opportunity to use their formidable team strength to rip the race to pieces in the crosswinds, in the hopes of catching Contador and other pre-race favorites off-guard and relegating them to the second or third group on the road. Today’s relatively calm wind was one bullet dodged in a series of potentially dangerous stages for Contador, Carlos Sastre, and other top riders who don’t have as much experience in the windy, chaotic conditions of Northern European racing.

With the nervousness of Stage 1 out of the way, the peloton would normally settle down a bit for Stage 2, but the nature of tomorrow’s course means that’s not likely to happen. Instead, the final hour of tomorrow’s stage could be more chaotic than today’s. The short, steep, narrow climbs that punctuate the final 40 kilometers of Stage 2 are more commonly featured in the Spring Classics, including Leige-Bastogne-Liege.

Remember, that’s a race both Andy Shleck and Alexander Vinokourov have won in the past, but it’s not a race that many of today’s pure sprinters have conquered. The yellow jersey contenders may need to show their cards tomorrow, much earlier than normal in the Tour de France. Unlike previous years, there will be no hiding in the pack while the sprinters and their teams control the race for the first week. The peloton will almost certainly split into several smaller groups, but with 10 kilometers between the final climb and the finish, it’s likely that the top yellow jersey contenders will arrive together.

Of course, another look back in history provides a different possibility: in 1995 in this same region, Miguel Indurain launched an attack on a relatively minor hill toward the end of Stage 7 and used his superior time trial skill to open up a gap that the peloton couldn’t close. Johan Bruyneel, who is now more famous for his acumen as a director sportif, managed to hang on to Indurain’s rear wheel and sprinted for the stage victory, but Indurain gained valuable time on his rivals during a stage that wasn’t expected to impact the overall classification.