Analysis St. 3 Luck has always played a role in cycling and the Tour, and over the course of a career riders who sometimes benefit from incredible luck must also experience the worst of it. Lady Luck has certainly smiled on Lance Armstrong during his career (remember the trip through the grass in 2003?), but today his luck ran out, with a flat front tire at a very inopportune moment.

I know some people expect me to spin the situation and say it’s no big deal, but let’s be frank: losing time to Andy Schleck, Alberto Contador, Cadel Evans, and Bradley Wiggins is not good. Time lost at the Tour de France is not easily regained, and the men now in front of Lance in the race for yellow will certainly do what they can to not only keep him where he is, but gain more time as well. Thankfully, we’re only 4 days into the Tour de France, not four days from the end. 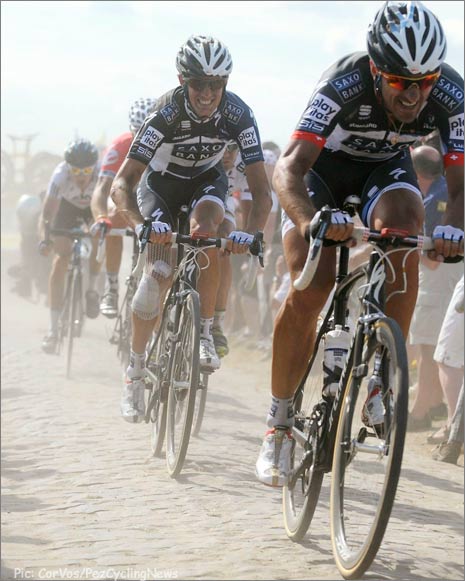 Andy Schleck surprised a lot of people (but not himself) with his confident ride across the cobbles.

The team that played their cards to absolute perfection today was Saxo Bank. They knew today could potentially be a big day for them, especially with two Paris-Roubaix winners (Fabian Cancellara and Stuart O’Grady) on the team. Andy Schleck has said all along that he’s a pretty good rider on the cobblestones, and he proved it today. Having Cancellara to follow is a definite benefit, but Andy showed tremendous skill of his own to be able to stay right with him. The team kept the pace incredibly high and splintered the peloton over the cobblestones. Cadel Evans had a great ride in the front group and now sits as the top-placed yellow-jersey contender. Bradley Wiggins, too, had a great ride to erase much of the deficit he suffered during the prologue a few days ago. And Alberto Contador, the man who had never before raced over the cobblestones of Northern France, rode impressively through terrain and conditions that are not ideal for him.

As the peloton recovers and recuperates tonight from four days of hard and stressful racing, the big question is what happens next? Looking at the standings, what’s most telling to me is that the pre-race favorites are separated by significant, but not dramatic, time gaps. Lance is 1:51 behind Evans, but less than a minute behind Schleck, Contador, and Wiggins. It’s also important to realize that the gaps between Schleck and Contador, and between Evans, Schleck, and Contador, are between 20-40 seconds. Normally at this point in the Tour de France, especially a Tour that begins with a relatively short prologue, the favorites are bunched very close together in terms of time. When gaps are very small in the first week, riders tend to be conservative. When only one rider has lost time, it can be difficult to get any cooperation from other riders and teams. But with more of a spread, there may be a lot of riders and teams motivated to close those gaps – or open them, in some cases – even before the mountains begin. I have a feeling the peloton will take the opportunity to have a slight break tomorrow (the stage is very well suited for a long breakaway that gets reeled in before the finish to set up a bunch sprint), but after that the racing may become quite aggressive again. 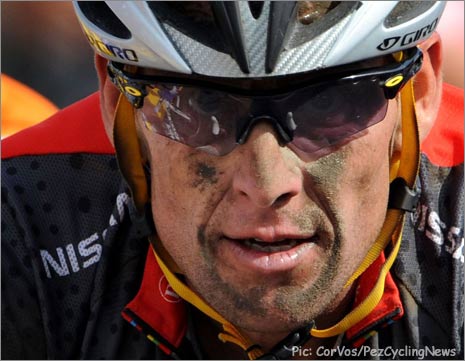 Lance suffered perhaps his worst luck ever at Le Tour – losing time due to a flat tire.

There were two performances today that might unfortunately get overlooked due to the attention being paid to the stage’s impact on the pre-race favorites. Ryder Hesjedal and Tyler Farrar, although they finished at opposite ends of the pack, had very impressive rides in Stage 3. Garmin-Transitions suffered some demoralizing blows yesterday with the loss of Christian Vande Velde to broken ribs and the fractured wrist to Farrar. But rather than lament on their misfortune, the team rallied and nearly won the stage.

Hesjedal was absolutely flying over the cobblestones [leading for most of the stage, and scoring 4th in the final sprint – ed.]! Far behind him, Farrar showed a lot of grit and determination to complete the stage at all. Even a hairline fracture in the hand or wrist is extremely painful for a cyclist, because the vibration from the road – even smooth roads – causes constant pain. Racing over cobblestones with a broken wrist had to have been excruciating, and I greatly admire Tyler’s courage. I only hope that his wrist recovers enough in the coming days that he’ll be able to grip the bars with enough strength to challenge for a stage win later in the Tour.