Roadside Stage 5: The race continues its progression to the south and a first appointment on Saturday with the mountains of the Alps. Before making the 187km journey to the Canals of Montargis, we took a look around Epernay to see and sample some of its local attractions.

Despite the rules of name protection afforded by the European Union, sparkling white wine is still almost universally referred to as “Champagne”. Today in Epernay we were in the heart of the only region in the world who has the legal right to use that name for their wine and so it would have been remiss of us to leave without sampling a little of the original and the best. 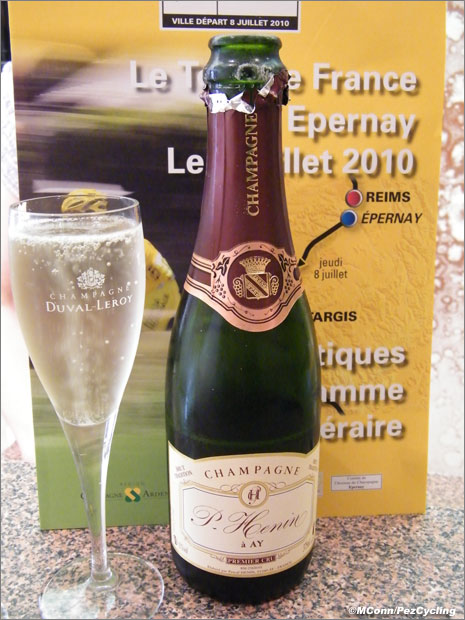 There had been frequent times on the race when we had both remarked at the early hour some of the locals were sipping a beer or wine at a local bar. Today we went with the flow and had a very obliging shop keeper pop a cork for us at around 10.00am. What a way to start the day.

Along the Avenue de Champagne where the race would be rolling out at 12.30, there are around 110 kilometres of cellars, in which more than 200 million bottles of champagne are stored underground for some of the world’s most famous names. 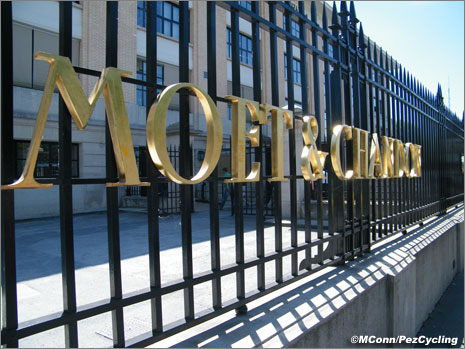 As today would be our last day on Le Tour and we would be heading to Paris to catch our flight immediately after the departure of the riders, we decided to get into the village early to see what was happening, before the race headed on without us.

We weren’t the only ones up early today, as Team Sky’s sports director Sean Yates (himself a former yellow jersey wearer) was getting in a few kilometres on the road in the fantastic early morning sunshine. 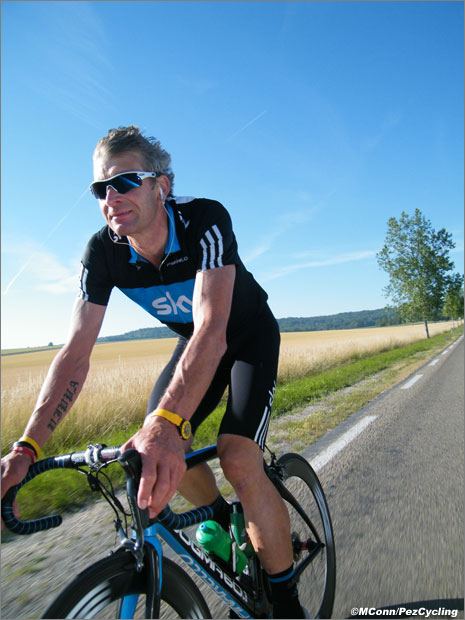 Later at the village, Yates arrived in his “work clothes” at the wheel of his mobile office where he would be spending the next four or five hours directing his troops. 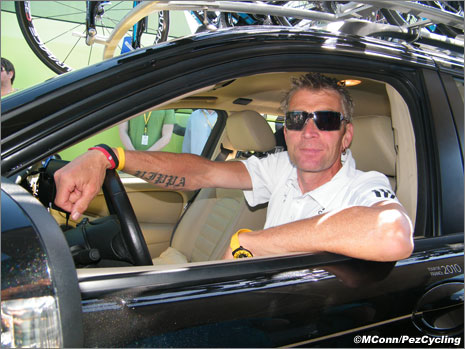 When the race hit the stones of northern France on stage three, the race organization had forbidden the use of television screens in the front seats of team cars. With the elevated dangers of the narrow, crowd-lined cobbles now behind the race, it is back to our regular scheduled transmission to both the sports director and front seat passenger as well as to the mechanic via a separate unit mounted in the back seat.

There are plenty of stories of tired mechanics sleeping their way through uneventful days on a Grand Tour. Now that the Team Sky boys have their own TV sets in the back, I wonder if they stick to the cycling broadcast or catch up with their favourite show to chill out and relax?

In at the village, the local producers were doing their best to showcase their local product. At one point I did have to wonder if the guy up the lamp post had had a few too many ”samples” of the bubbly grape juice before he went out to do his show. 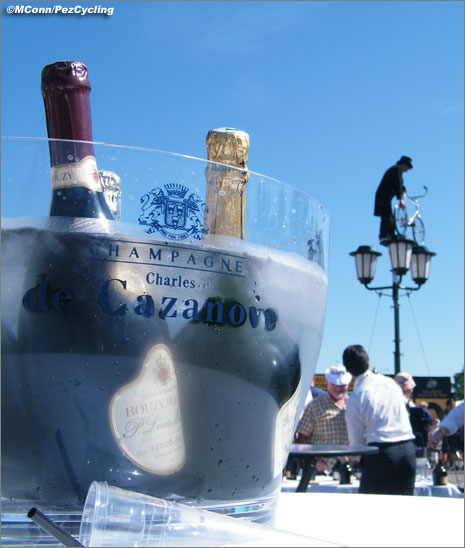 He wasn’t the only cyclist putting on a show at the start either. There were a group of stunt riders performing pretty amazing tricks and springing about all over some obstacles, all why providing their own commentary with wireless microphones. 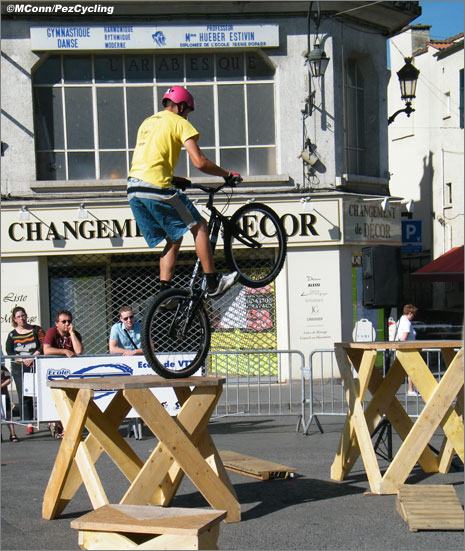 As someone who once did some serious damage trying “to do a Robbie McEwen” and pop my bike up on the back wheel, I was more than a little impressed with their skills.

In a semi-continuation of my United Nations theme from yesterday, a group of kangaroo wearing supporters drew my eye near the stunt show. After moving in for a closer inspection, I found it was not a group of Aussies sporting thee green and gold kangaroo, but a bus load of Tom Boonen supporters from the Middelkerke on the west coast of Belgium. 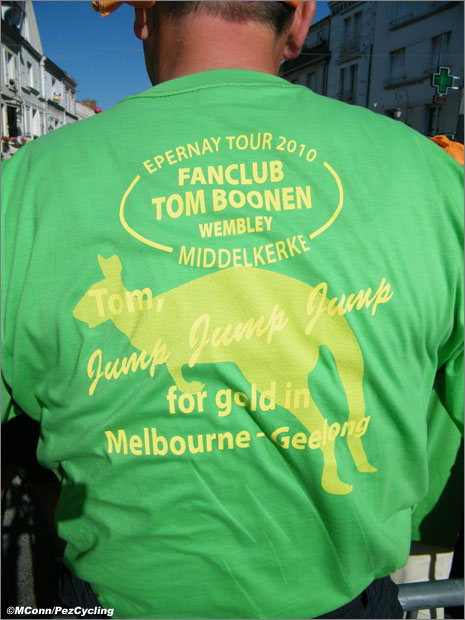 Their leader, Johnny Devey told me that Middelkerke was actually a sister city with Epernay, which was part of the reason why so many had made the trip south when their hero Boonen, was not actually riding the race.

The crew misundertood when I asked them if I could take a photo, and actually though that I wanted a shirt. They insisted I take none and even photographed the presentation. 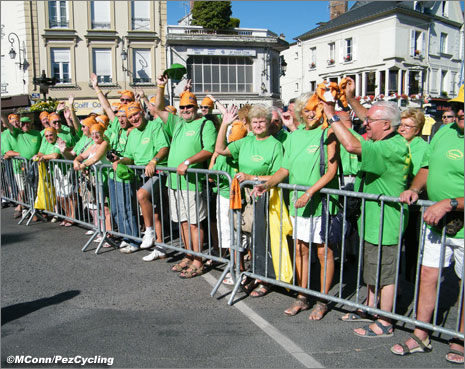 I wished them luck for the Worlds at the end of the season and said that if an Aussie didn’t win, then Boonen would be a worthy champion again.

They didn’t seem to mind that my money was on McEwen. The man who stood on the podium when the worlds were in his adopted home country of Belgium, will be keen to see the fast finishing Belgian suffer the same fate when the championships are in Australia. 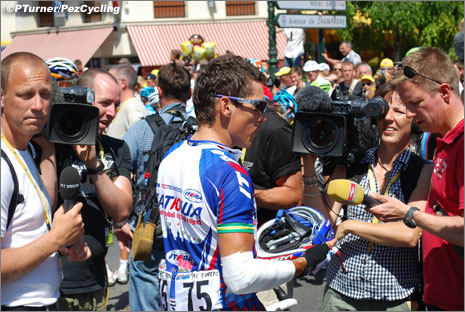 McEwen was at the start wearing a bandage on his elbow (check the Aussie’s twitter page to see what is underneath… if you dare) and telling reporters he was unsure of the exact extent of his injuries and how they might affect his performance.

Simon Gerrans had no way of covering his injuries and emerged from the Team Sky bus with stitches and a bruised face that seemed to have taken on a nice deep colour after two day of ripening. 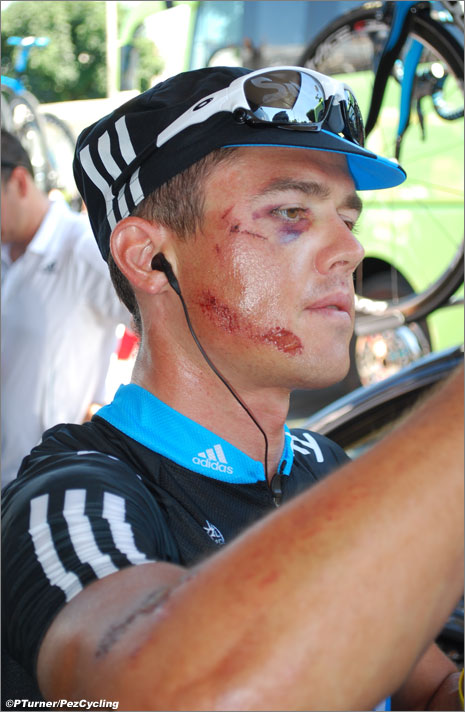 Gerrans said he was clipped in the face by a pedal when he went down on stage 3. Ouch!

Team Garmin Transitions rider Tyler Farrar is another man still on the road to recovery after his crash in the rain of Monday. Unlike his tumble on Dutch roads at this year’s Giro, there was no jumping back on the bike to win the stage that day. 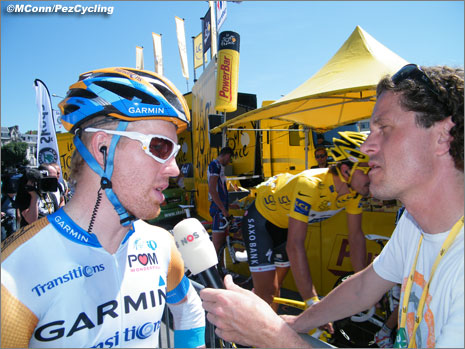 As Fabian Cancellara cruised the buffet of fresh fruit that is on offer every day for the riders, Farrar spoke to the Dutch NOS crew (in Dutch of course) about his recovery and the fact that it would be another day or so until he could properly pull up on the bars for full power in the sprint. 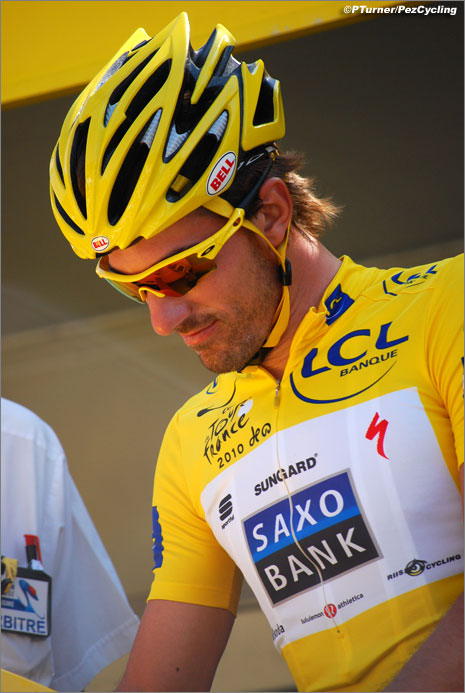 Fabian Cancellara was a happy man at the sign in today.

Yesterday’s stage winner Alessandro Petacchi, had a lot of interest when he emerged from the bus. Alessandra De Stefano of RAI Sport was given front row for the pre-race interview as the quietly spoken Italian outlined how pleased he was with the work his team had been doing to set him up for the sprints. 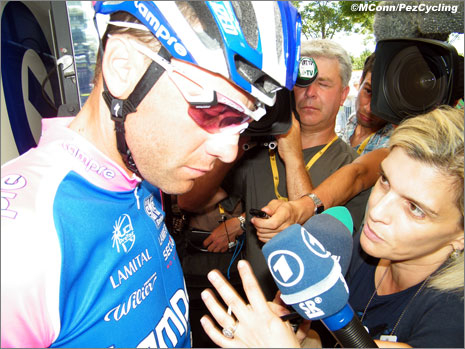 We grabbed a few words with “The Train” too, with Mauro da Dalto telling us that the spirit in the team was incredible and with two stage wins already the pressure was off in the team for this Tour. I asked about Damiano Cunego, and Da Dalto agreed there was some disappointment that crashes had finished his GC hopes, but that the rider from Verona was now setting himself the task of winning a stage before the Tour was over.

Mirko Lorenzetto echoed his team mate’s feelings, saying the mood in the Lampre Squad was excellent and they would certainly be seeing about making it three wins on the road to Montargis today.

With the sun beating down, the riders were doing their best to find some shade while the spectators braved the heat to grab an autograph or two where they could. I’m not sure if it was the good weather after a couple of days of rain, the feeling that the most dangerous days of the race were done, or just the abundance of champagne in the start village, but the riders seemed more relaxed than usual and happy to accommodate any and all requests for a signature. 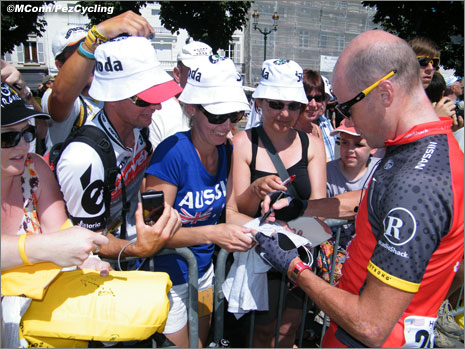 This group from Australia had a prime location to watch the sign on and catch the riders as they returned to the buses.

In his final Tour de France, Jens Voigt, was doing his best to make sure he gave as many fans as possible his few seconds of attention. Despite being given the hurry up a few times, the likeable German just kept signing and signing, whatever was presented to him. 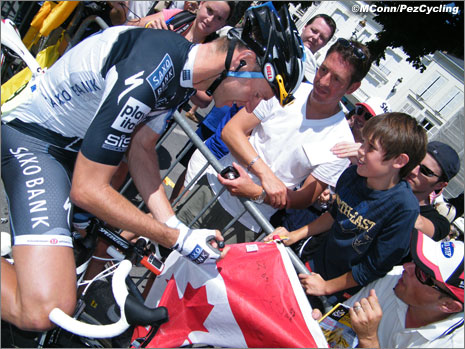 Alberto Contador was having a serious moment at the start this morning, maybe pondering what was to come in this year’s race and thinking about what other obstacles might pop up as he sets sail to hopefully become a three time winner of the Tour de France 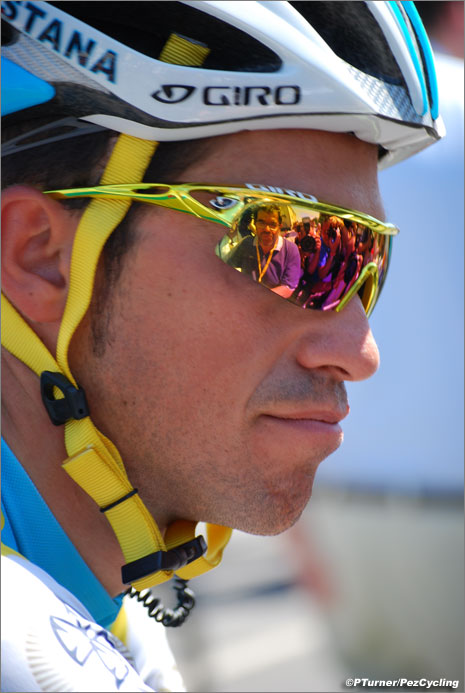 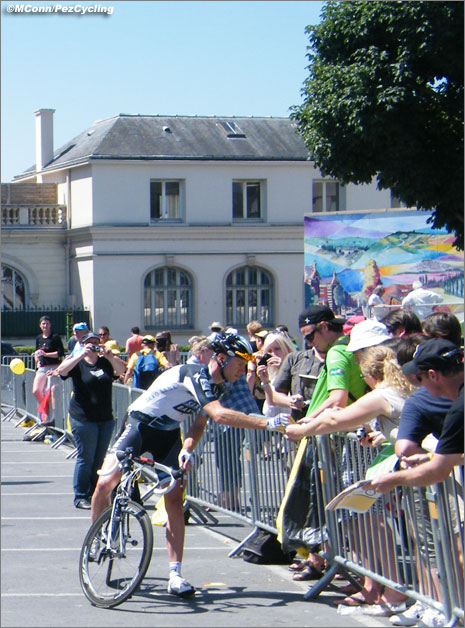 The French police made a point of congratulating Tex on his driving skills and keeping it safe while he was driving on the right hand side of the road for the first time. (Well, that was the story he told me.) 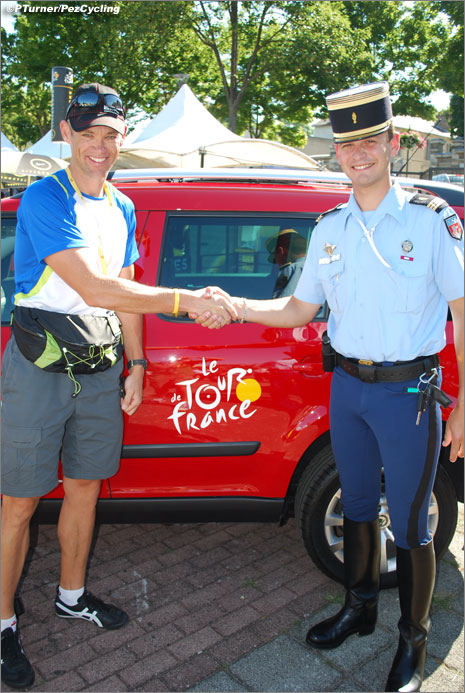 I think he was either picking up traffic control tips for the next Tasmanian three day tour or double checking how many champagnes were allowed for those stepping behind the wheel. (For the record, and before you write in, we actually only had one each all day).

It has been a challenging, stressful, frustrating, but overall enjoyable and productive first (working) Tour de France for me this week.

Good Luck to Gord and then Ed as they take the middle and then final weeks respectively.

Also, a big thanks to Paul/Tex for keeping me headed in the right direction, snapping the photos whenever he could and for not throwing me under a team bus when I asked him for the 100,000th time, “Now, have you any idea where my [insert object of the moment] is?”

Don’t forget to keep it tuned to PEZ for the rest of the 2010 Tour de France. 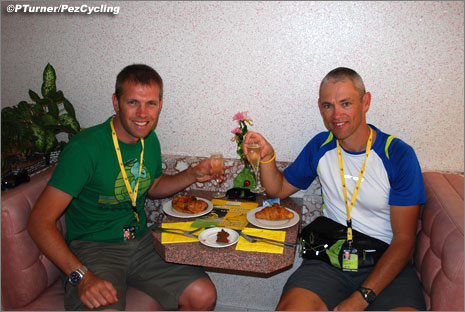