Roadside Stage 7: It’s been a bit of a trek, but we made it to the stage seven finish at Les Rousses, to pick up the baton that Matt Conn and Paul Turner ran with so bravely through Rotterdam’s port side, down the slippery Ardennes descents and over the cobbles of northern France. The Jura is a very different beast though …

Stage seven: Mercifully, the hotel in Ferney-Voltaire was so close to Geneva airport that our car rental agent said we could have walked to it. Not at 32 Celsius though! Ferney-Voltaire is a pretty little place, just on the Franco-Suisse frontier, and well worth a visit for its chateau, which the writer and philosopher himself patronised between 1758 and 1766. 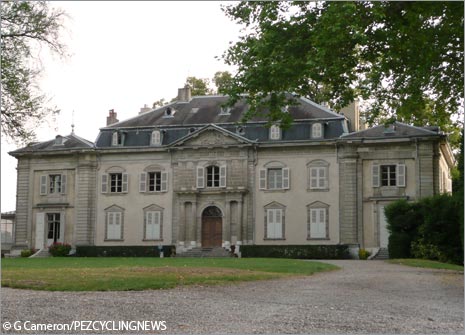 He’s immortalised in fountain form, too, water spouting forth like philosophical murmurings, as the locals enjoy the sleepy Friday evening atmosphere. 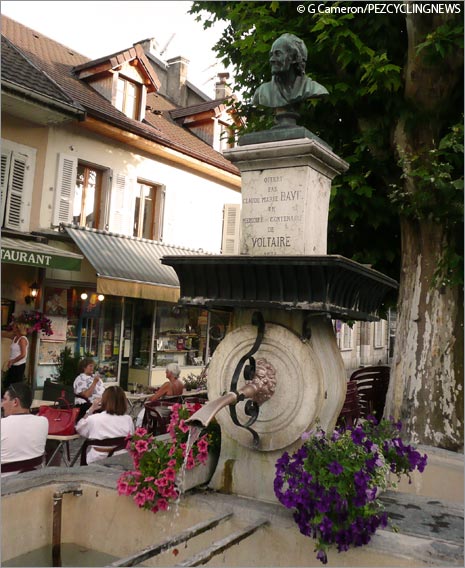 Friday night’s dinner was a Carrefour classic enjoyed on the hotel balcony: premium ribs, jambon, fromage, demi-baguettes, strawberry tart and a sneaky little Chablis to take the edge off the travel fatigue. 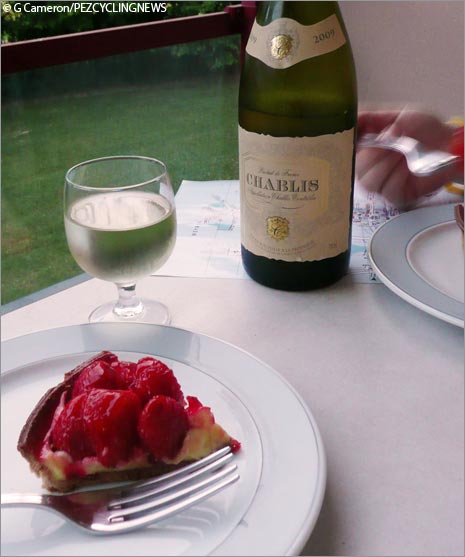 And what better place to shop for essentials than the supermarket that is one of Le Tour’s sponsors, a supermarket where you can have virtually wall-to-wall coverage of the race while you’re picking up your dinner? 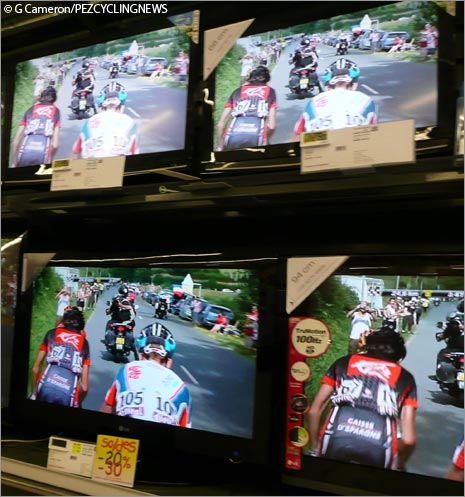 The peloton will be sweeping close to the town on Sunday afternoon, a brightly-colored host of heroes, a little like this fellow adorning the doors of what I thought might have been a pretty avant-garde garage before I looked way, way up above and saw a sign for ‘Theatre’. Old Voltaire wouldn’t have been too impressed with me. One of the reasons he baled out of Geneva and bought up the Ferney estate was that Geneva’s authorities looked down on theatre very disapprovingly. 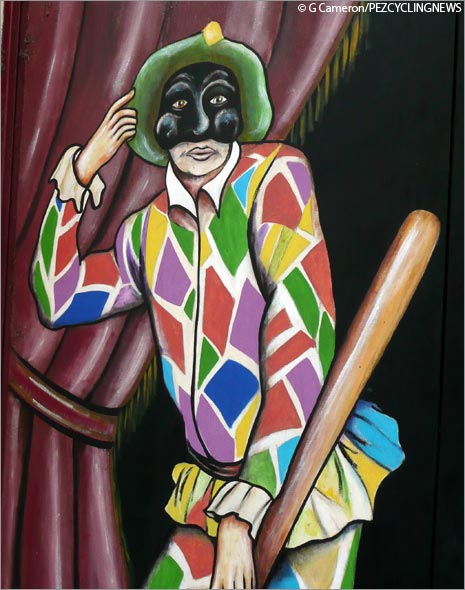 Saturday dawned bright and early. We needed to be up with the larks to take the car as far as our pre-credential status would take us before the Gendarmerie said ‘Non’. Swinging uphill, round hairpins, trying to remember not to drive on the left-hand side of the road we spotted a little poster advertising the Tour’s arrival in the window of what might have been a backwoods chop-shop but we stopped for a quick picture regardless. 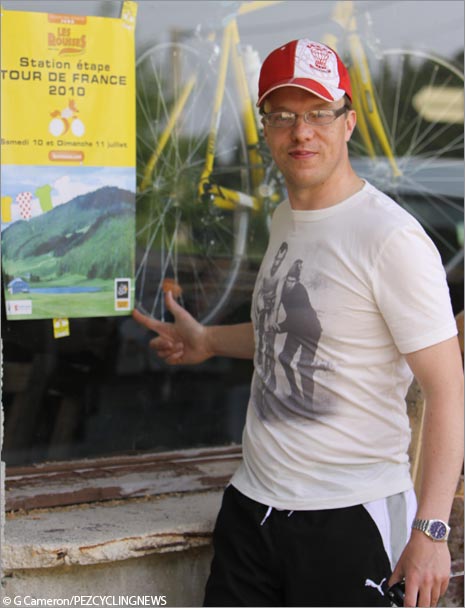 We made it as far as Premanon and the park-and-ride. This young chap was fully prepared for the day ahead, although his baguette rations had taken a bit of a hammering waiting for the ‘Navette’ to haul the hundreds up towards the finish line. 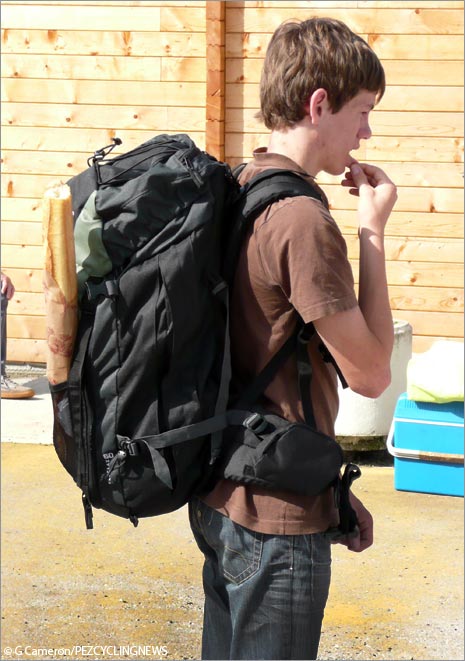 The shuttle bus disgorged its contents a couple of hundred yards uphill from the finish line, so we rolled down to the ‘permenance’ to pick up our accreditation passes and car stickers, and came out clutching them like kids at Christmas with the toys they’ve hassled their parents for since the previous festivities. Without those little babies, your life on Tour becomes very, very difficult.

The polka-dot fox just beyond the Lamoura Holiday Village kept a cunning watch over proceedings, sitting outside a pharmacy. Insert your own doping-related joke here. Unfortunately, his formerly real-life counterparts aren’t quite so careful, as we saw more than one flattened on the way up from Ferney-Voltaire. 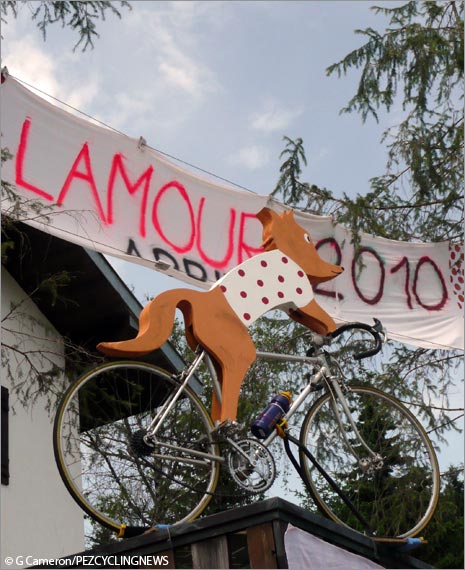 The stage finish, Les Rousses, takes its name from the russet-furred animals like the fox (and squirrel) which the hunters up here liked to take out. The guy in the picture above is more fortunate – he’s Rouxy, the local mascot, whose polka-dots combine with the russet color to give the Tour’s visit a slightly different hue.

The rest of the animal life is happily domesticated and pretty musical. These bovine virtuosos were giving the bells full-gas this morning. If I’d had a hangover, they wouldn’t have had their pictures taken. 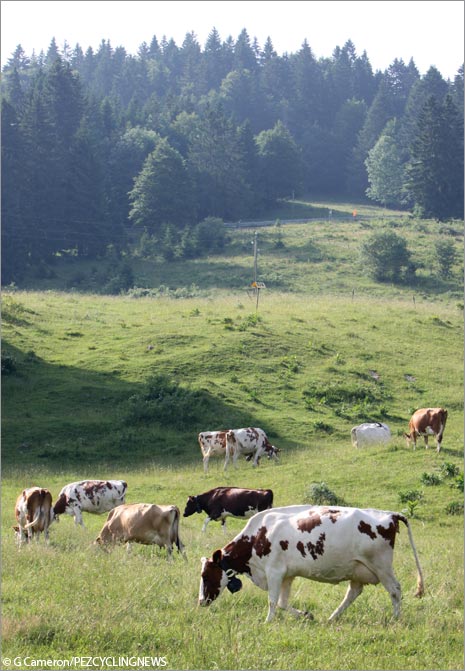 We took an amble down towards the flamme rouge and met the MacPhee family from Ottawa, followers of PEZ, and fans of the Tour. Allan, Nancy and Megan were scouting for the ideal viewing location and had given themselves the best possible opportunity of choosing it by following one simple Tour rule: arrive early.

Allan’s family roots go back to the Isle of Skye in Scotland which houses half of the Pez Scottish bureau so it was like meeting an old friend. He was raised near Glengarry County, Ontario, and is on a European holiday with his wife and daughter. They’re off to Ireland next week, but today they’re hoping for good things from Thor Hushovd, Fabian Cancellara and Andy Schleck. Enjoy the Tour guys!

Next up, we had a brief word with Denver, Colorado, riders Tom Maddox and Brack Hattler, which seemed the polite thing to do as they’d made their way up by bike, to help kick the jet-lag. They’re following the Tour from today, through Monday’s rest day and through Tuesday’s stage. Brack’s sending good wishes to Tyler Farrar with the hope that a stage win might help heal the broken wrist. I asked them whether Armstrong has any chance at the overall this year, and there was no messing with answer. Tom: “Nope!” Brack: “Podium is possible.” 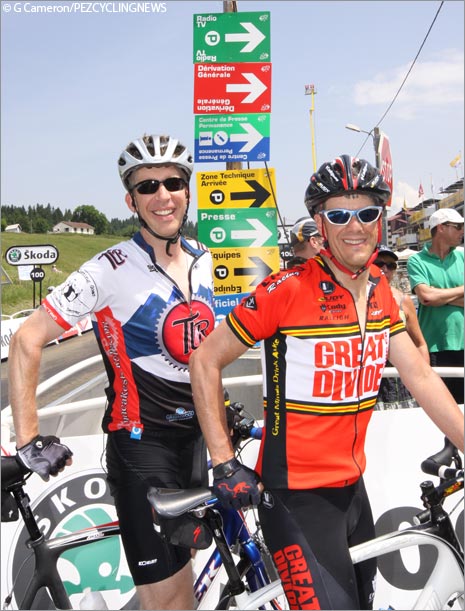 The fans were starting to arrive in greater numbers as we looked up to see the Fabster giving a start line interview in Tournus. the big screen brought our heroes a little closer, just four hours before they were due to sweep into panting, sweating, teeth-gnashing view in Les Rousses. 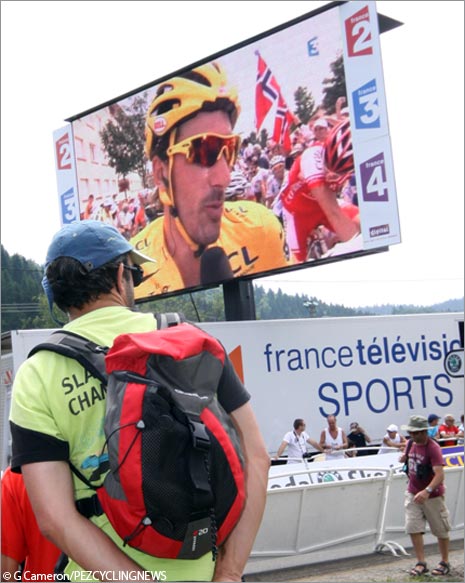 Turning around from the ten-foot tall Fabster grinning down, the slopes above the finish line were beginning to fill up. Flags of Denmark, Australia, “Hup, Holland, hup” li-los and abandoned bikes scattered around. Maybe the rider’s name was Ulrich? Apparently, today is the feast of St Ulrich, and to commemorate the no-doubt very hungry fella Station des Rousses was giving away free ski passes to anyone whose first name was Ulrich. So, no luck for Jan, the ex-Telekom powerhouse, or Lars, the Metallica sticksman, but hopefully someone got lucky. 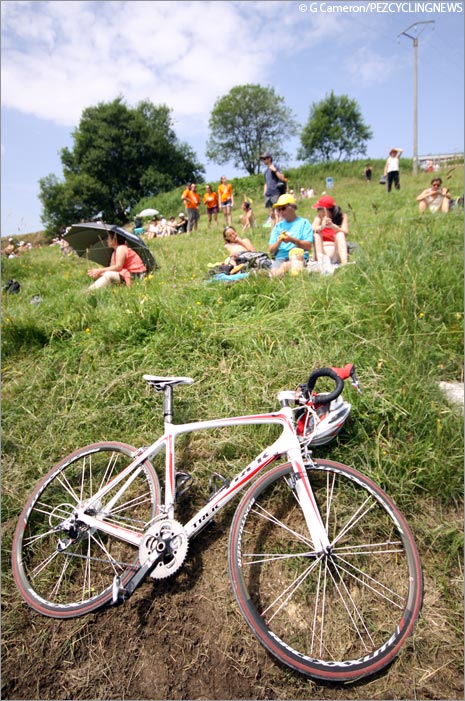 This visit to the Jura region is a huge deal for the residents. It’s an opportunity to put their home region in front of the world with its beautiful hills and Alpine-like pastures. One of the ladies helping to promote the area is actually Swiss, Vйronique Olsen, but her father-in-law is one of the movers and shakers that has helped to bring the tour to an often-overlooked jewel of the French landscape. The advertising material they were handing out says: “Jura, 139% vйlo”. Seriously, they’re not kidding. On or off-road, this place is biking heaven. 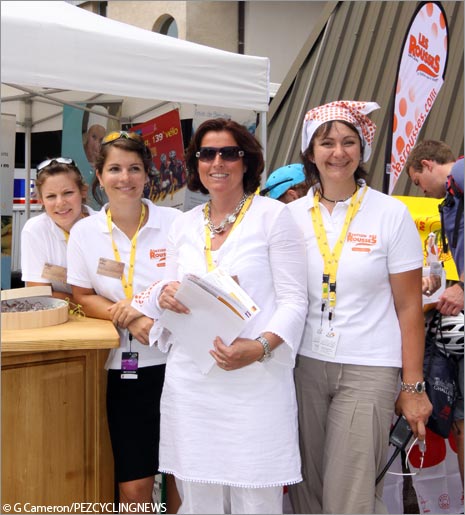 The local artisans here in the Jura region have put on a fine spread for the press, so it would have been rude to pass up some fine local cheeses, sausage, patй, jambon and a cracking early-afternoon Chardonnay. 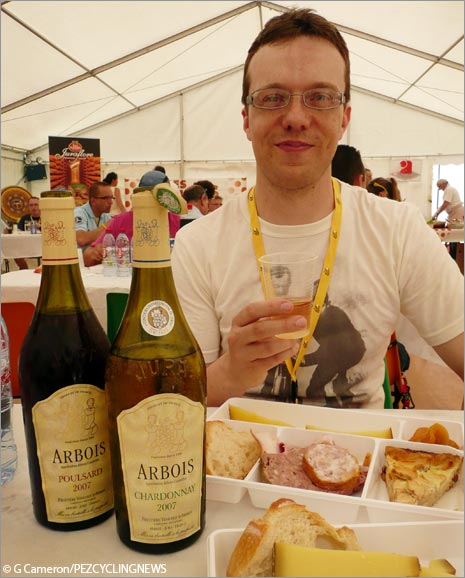 Back in the press room, we hijacked five minutes with the ever-polite and patient Johan Museew, who is covering the Tour for the Laatste Nieuws newspaper and also for Belgian TV. His son, Gianni, is along with him as a photographer for the whole three weeks. Can the break make it today? Perez, Hondo, Dumoulin, Knees and Pineau had 100kms to cover when we spoke.

“Yes, they have a chance today because they still have an advantage of nearly eight minutes. It’s very hot, especially on the last two mountains so it is possible for them but it depends on what Saxo Bank want to do behind them, also Radioshack but especially Astana. Even although this last climb isn’t so steep, I think Astana will try something.” 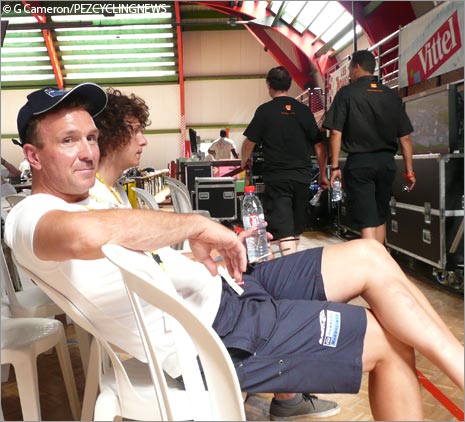 So, time to hit the finish line to see who’s going to finish ahead of who, and what state they’re all going to be in …

… closing your eyes outside the press tent on the finish line, you’d think the cars were fording a river. The swishing sound was the unbelievably tacky tarmac, which had practically melted. They often say riders look weird when they walk, but the press core looked odd, too, giving each step an exaggerated lift to get the foot airborne.

The big screen showed Sylvain Chavanel racing into yellow, and gradually ones, twos and threes of baked racers appeared.

Juan Manuel Garate got third on the day and looked screwed. 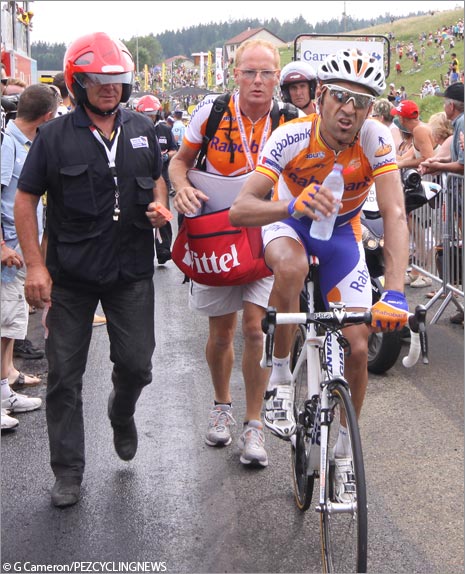 For Astana, they’d had guys up front but today is too early for Alberto Contador to try and blast everyone else out of the water. That might come tomorrow, but he looked cool here. 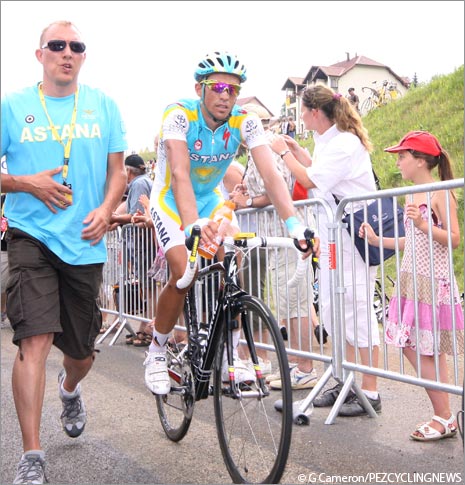 Levi Leipheimer was much in demand and seemed to be doing the RadioShack press calls by himself. He was starting to look a bit bemused by it all before he reached the safety of the bus. 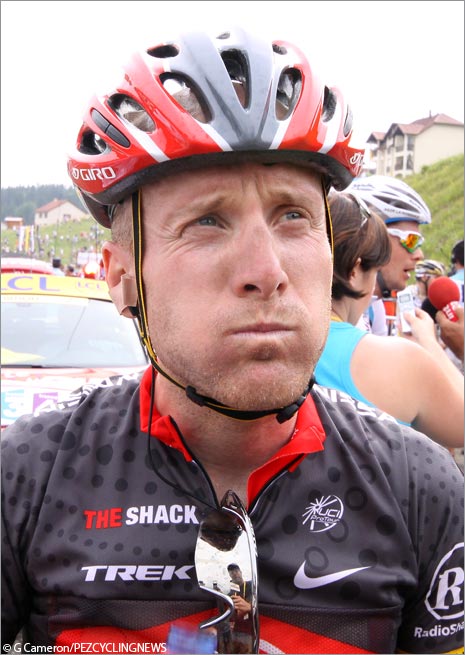 For the Fabster, his time in the yellow jersey is done, but wth Bjarne Riis looking for a new sponsor, spending practically the whole week in the maillot jaune will have helped negotiations along. Cancellara got a consolatory pat on the back from his boss as his yellow disappeared. 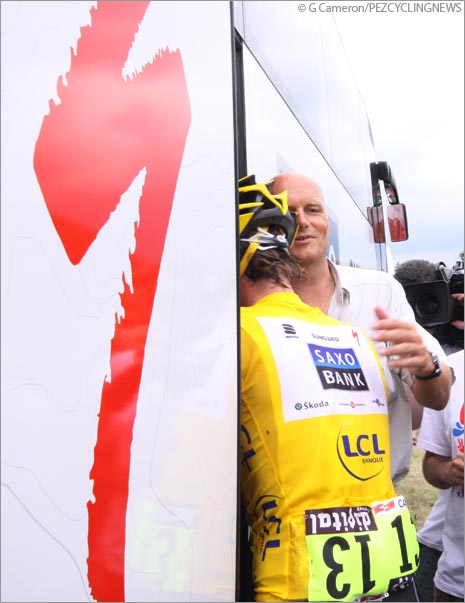 The sprinters just try to survive on a day like this and they looked well and truly cooked. Leading out Mark Cavendish in the furnace of a stage-end sprint is a piece of cake compared to this. 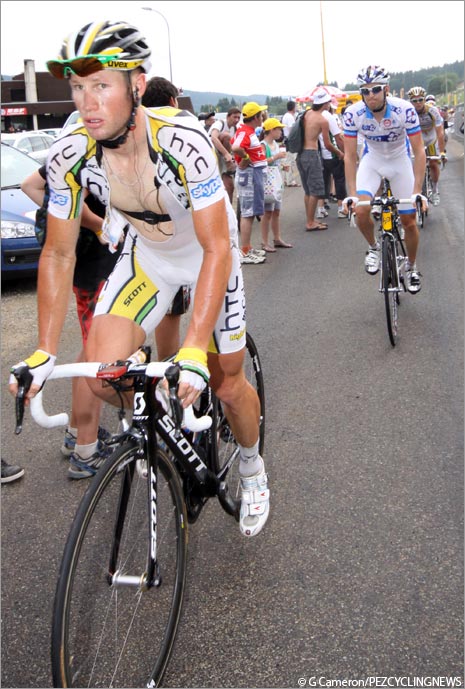 So, that’s it for today. Time to go and pray there’s still a shuttle bus back down this hill. Where did we leave the car?