Tour de Pez: Departures All Round

Roadside St. 12- Stage Start A frenetic, heat-battered week on the Tour draws to a close and we’re now in our blissfully air-conditioned room in Lyon. A few moments ago, we watched Joaquin Rodriguez take his finest ever result; a few hours ago, we watched him and his workmates leave for another day’s toil, blistering their way through the Monts du Vivarais …

I can understand the ethos of the Italian journalist who sat in front of me in the press room this week, typing his reports on a typewriter, each line ending with a satisfactory metallic scrunch. I can’t understand anyone who tries to navigate the Tour without a Sat-Nav. Today, though, my honey-voiced helper is still deciding which route we should take when the giant biscuit pack passing us reassures us that we are definitely heading for the Bourg-de-Pйage start. 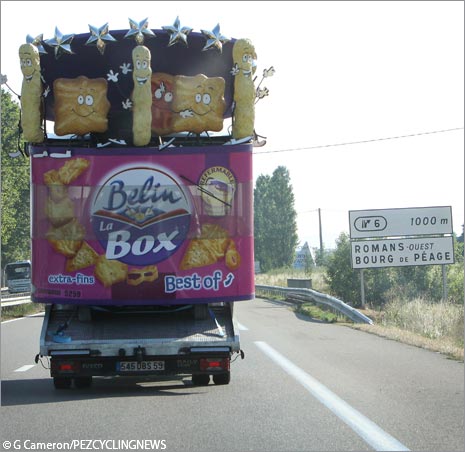 In the car park of the Gйant Hypermarket, final preparations are in full swing for the departure of the caravane publicitaire. Chrome is buffed, paintwork polished, hair and make-up checked. 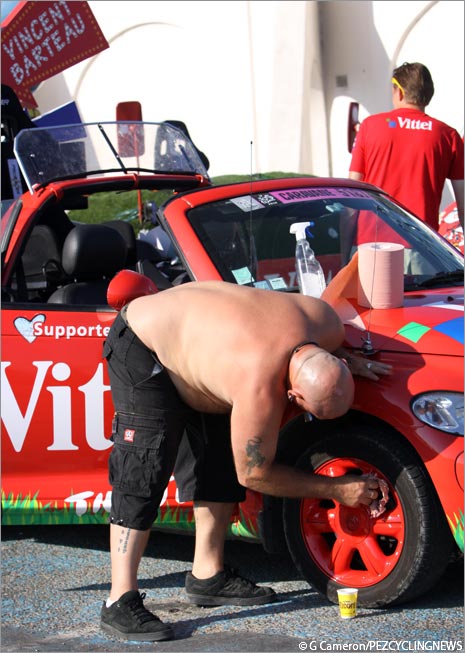 Sitting on the Avenue de Verdun, the sculptures are all about the bike. Single red, yellow and white riding figures line up on the central reservation. There’s something a little more elaborate at the gates to the village though. 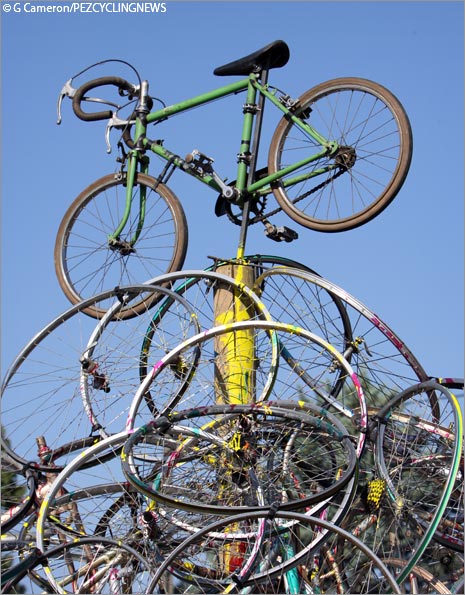 It’s a day for us to take a more leisurely stroll around the village dйpart before we take our leave of the Tour. As you walk in, you’re greeted by names upon names of past and present heroes, printed on the backs of chairs and on a huge welcome mat. 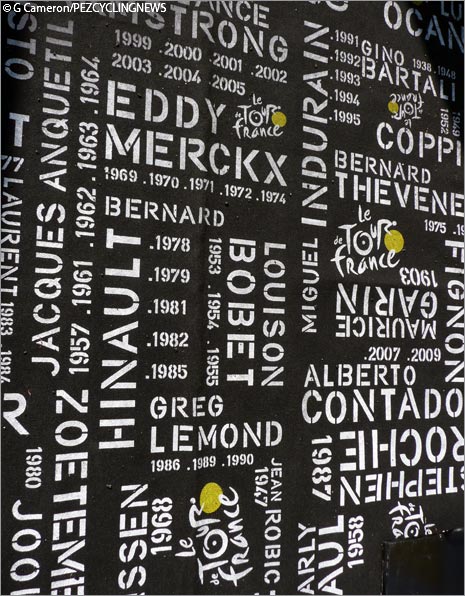 It’s time to check out the entertainers and stalls that we’ve thought about stopping to watch over the last seven days. Frederic Adrait is following the Tour, creating a separate canvas for each start town, weaving in elements of the host’s identity with a suitable cycling figure, maybe a resident or former stage winner there. Working it up at speed, a lot of how he works is dependent on the start time, as he has to finish before the riders leave. Painting in the glare of the sun is tough: “I look like I’ve been swimming,” he laughs. Go and look at www.adrait.com to see more of his very cool work. 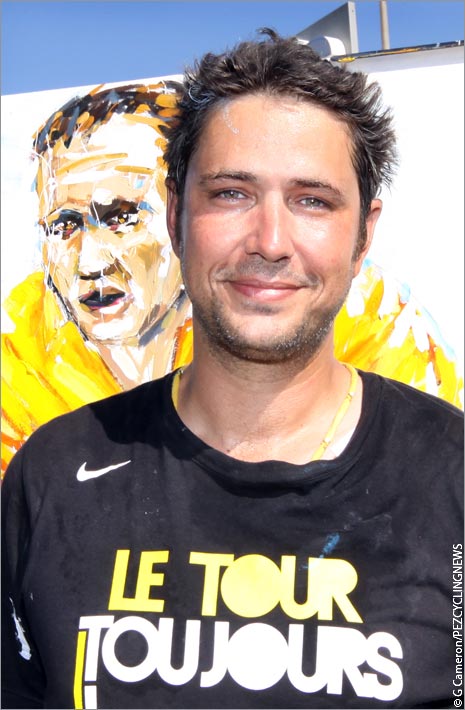 Albert, the acrobat, draws a massive audience as he larks about, balancing high above the unforgiving tarmac. It’s an impressive balancing act, with just the right amount of risk to keep the kids happy, and the skill that the adults can appreciate. 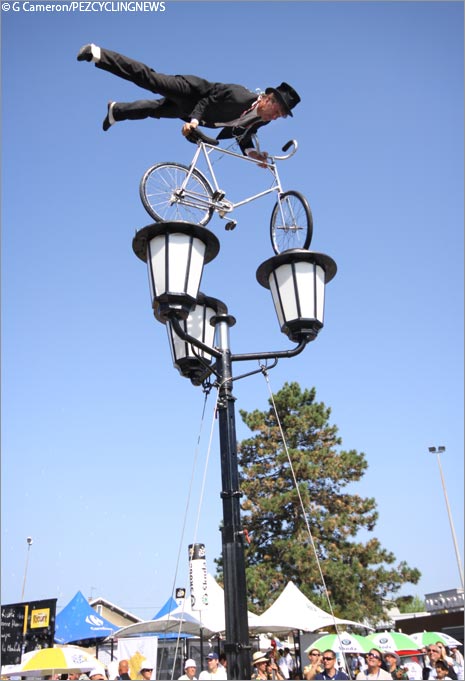 In the hospitality tents, Richard Virenque, with his very attractive companion, has signed a mountain of postcards and a few hundred shirts, books and caps. even after all these years, and all these things he’s done, he’s still a monumental draw. 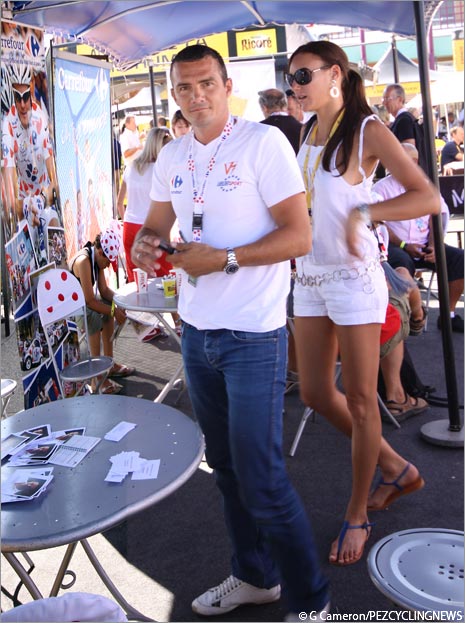 Talking of monumental, rugby star Sebastien Chabal towers over pretty much everyone n the start village; his size is emphasised as he struggles into the drivers’s seat of a 1950s Peugeot van which commemorates the French accordianist Yvette Horner. 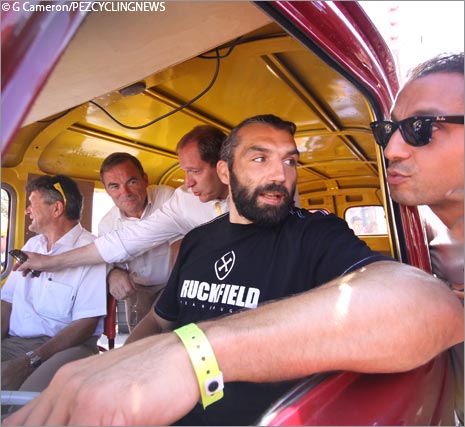 The Bel Air Line trio give us a mix of ‘Chansons Transatlantiques’ music as they dot about the village, and the ‘La Bicyclette’ song is the prefect backing track to the morning. 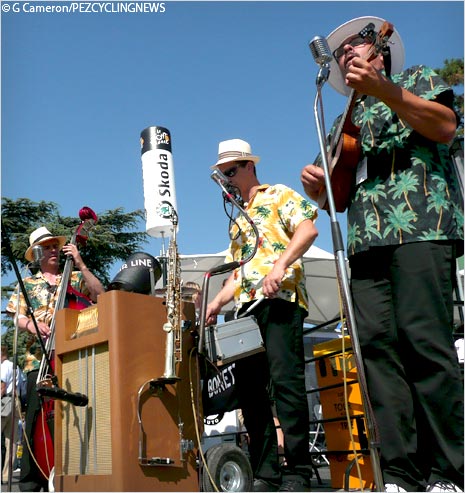 We need a blatant photo op to keep the boss happy, so it’s time to give our very own coureur from Equipe de Pez his Tour de France debut – he’s off the front, naturally. 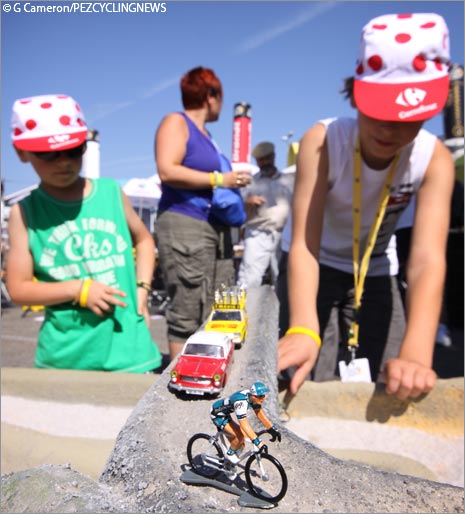 Hoping to get off the front sometime was FDJ’s Wesley Sulzberger who very kindly shared his ‘morale food’ with Pez – Haribo sweets. Sandy Casar’s win the other day has taken a lot of pressure off the team, and Wes seemed to be handling the mayhem of his first Tour with a very level head, all the time savoring the amazing experience he’s living. 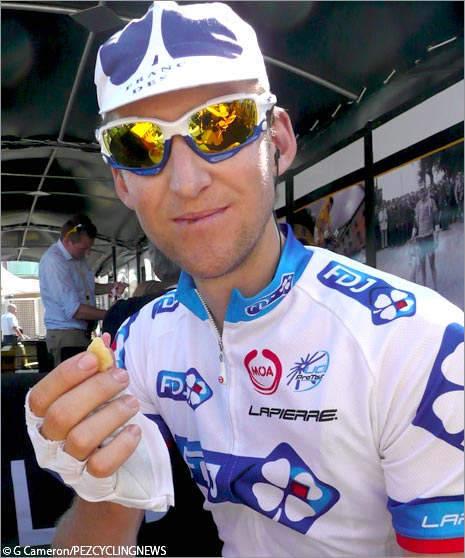 George Hincapie and Alessandro Ballan arrived together, like a pair of mysterious gunslingers from out of town. They left their steeds outside while they ventured in for a shaded coffee before Michael Rogers came by to shoot the breeze. 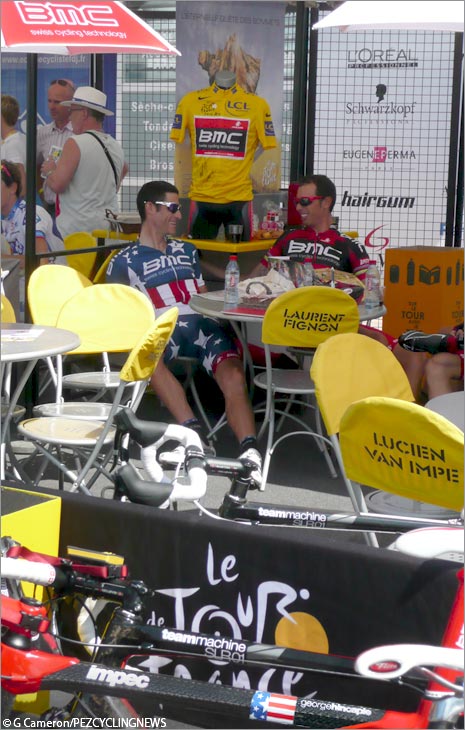 Three stage wins in the bag before the end of week two, not long after he was supposedly ‘in crisis’, Mark Cavendish was looking pretty happy with things, cruising into the village to kick back before the stage start. 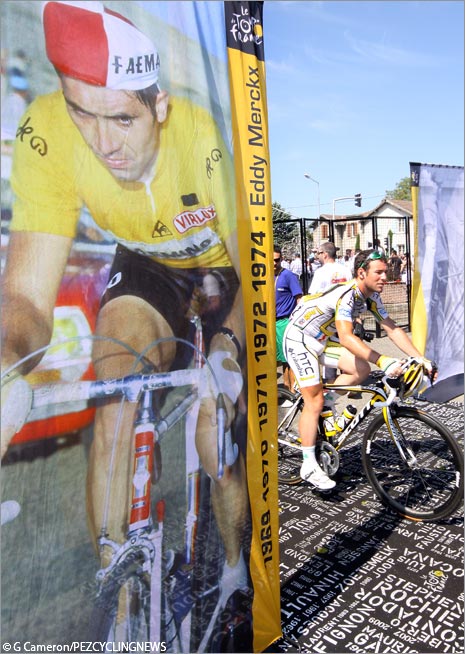 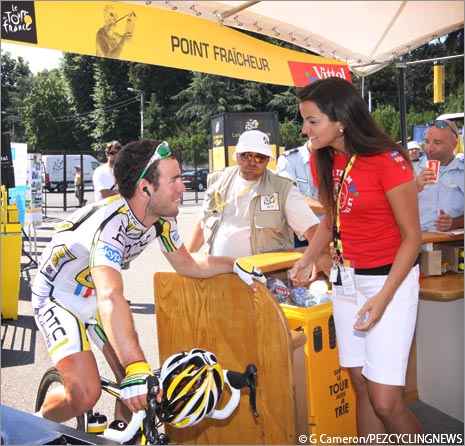 … before spending some more quality time with his minder/mentor/big brother Bernhard Eisel. They clowned for the fans, probably knowing full well that there was no chance for Cav on a stage that climbs La Croix Neuve, the Montйe Laurent Jalabert. 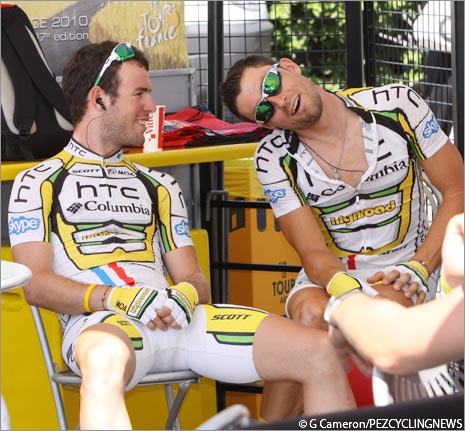 Thomas Voeckler’s son was checking whether today’s instructions from the Bbox Bouyges Telecom directeurs sportifs would give his Papa a shot at the win. 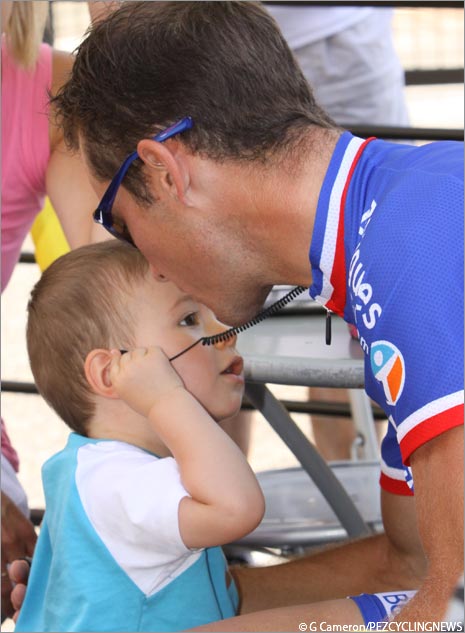 We dropped into the LCL booth to say goodbye to our pal Elisabeth Petzl, who is taking time out from work and PhD study to come on the Tour for probably one last time. It’s been a pleasure, Elisabeth! 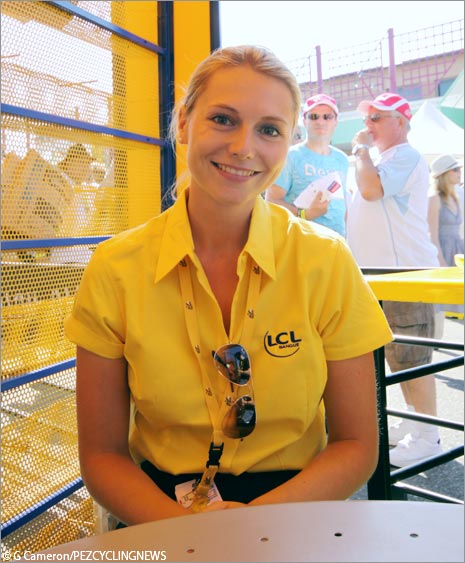 Time for a quick trip back to see the impressive fruits of Frederic Adrait’s labors before we turn out of the start village and onto Boulevard Alpes Provence to see the riders off. 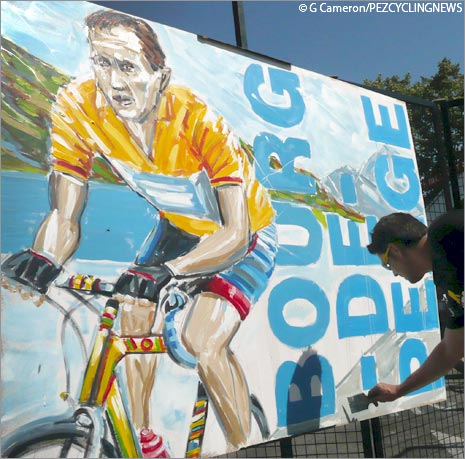 Stйphane Auge gives us a cracking photo with the image of his raison d’etre fluttering in the background. 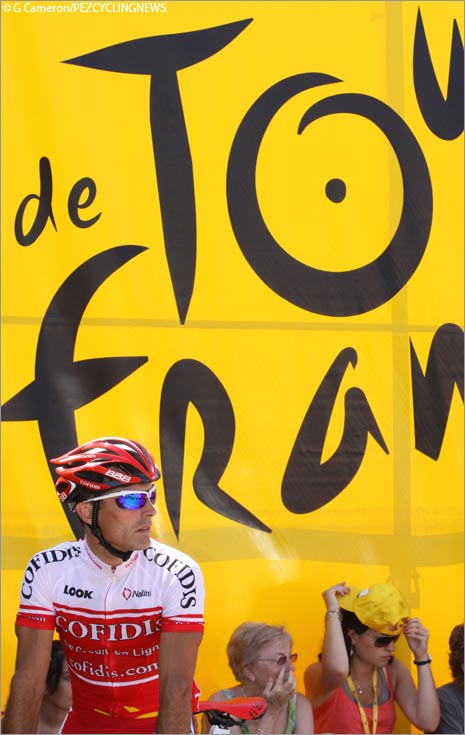 The riders are queuing up: Radioshack’s Leipheimer, Klцden and Brajkovic in the shade of the sign-on podium as world champ Cadel Evan’s waits his turn to stock up on supplies. 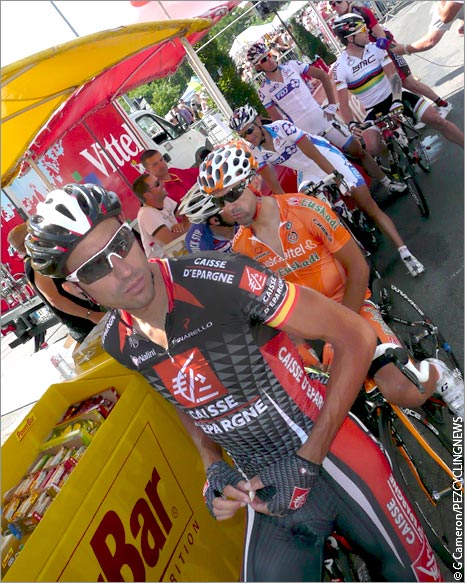 The list detailing the wants of the directeurs sportifs, taped to the drinks table, is pretty superfluous. They pretty much want all of the available options! 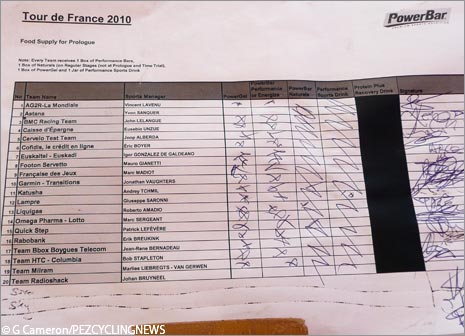 The security guards are running a tight ship and no-one is getting through to the start line that shouldn’t be there. In the distance, standing quietly is the man who’s managed to overshadow the Tour for the last decade, even when he wasn’t competing. The seven-time champion Mr Armstrong, is #21, just in case you haven’t seen him lately. 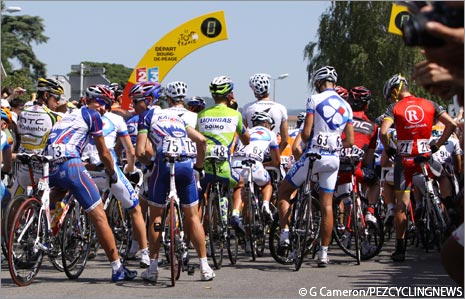 The clock above the start line zeros out, and so does our time on the 2010 Tour de France. It’s been a blast. It’s time for a bite of pizza before we jump in the car again. 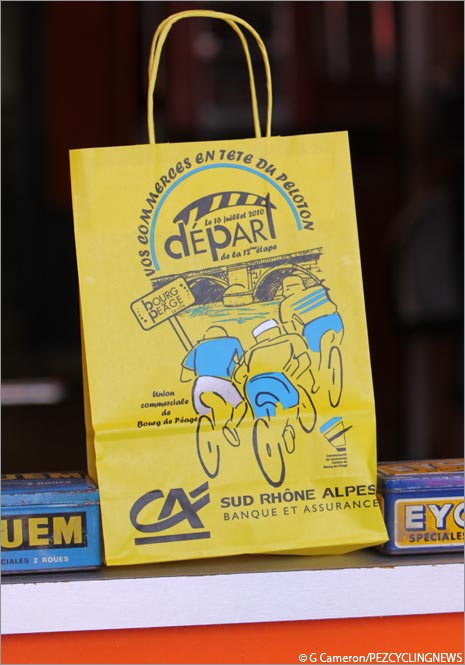 We leave you in the very capable Scottish hands of Mr Ed Hood and Mr Dave Chapman, who’ll guide you all the way to Paris.

For us, it’s goodbye to the Village Dйpart, goodbye to Elisabeth, goodbye to Lance and ‘a bientot’ to you all. Thanks for reading. And a bigger thanks to my photographer extraordinaire, Valerie!