Roadside Report: ‘Did you think it was a good Tour?’ asks Vik. I knew it was a leading question, but went along with it, ‘yes, a good Tour.’ ‘It was pathetic! I sat and watched it for three hours every day for three weeks. Menchov should have won; it was totally de-sanitized – crashes are part of bike racing. I suppose there’ll be no Paris-Roubaix next year – it’s too dangerous?’

Old Vik having a rant? Sure, but here’s what Laurent Fignon had to say; ‘What we’ve seen between the two favourites is inconceivable. Cycling isn’t a friendly game. The competition should be pitiless. When you’re rivals, you can’t love each other. In fact you musn’t love each other.’

I agree with both of them, it’s not the ‘Summer of love’ in San Francisco in the 60’s, especially when the ‘sportsmanship’ is distributed on a selected basis.

The 64,000 euro question is whether ‘patron’ Fab would have been so ‘sporting’ had Andy and Frank been by his side at the front on the road to Spa?

20) Euskaltel: no police line tapes, no stern minders – just kids, grannies and even dogs. More than a team, a symbol of the homeland – vai ! 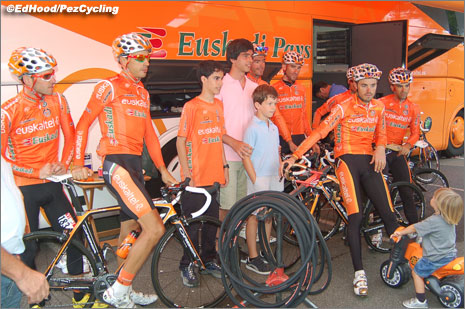 19) Chavanel: Any Frenchman who revels in conditions that would make a Belgian wince gets our vote. He could have sat back on his laurels after the first stage win, but not a bit of it. Aggressive, inspired, cavalier – a real baroudeur. 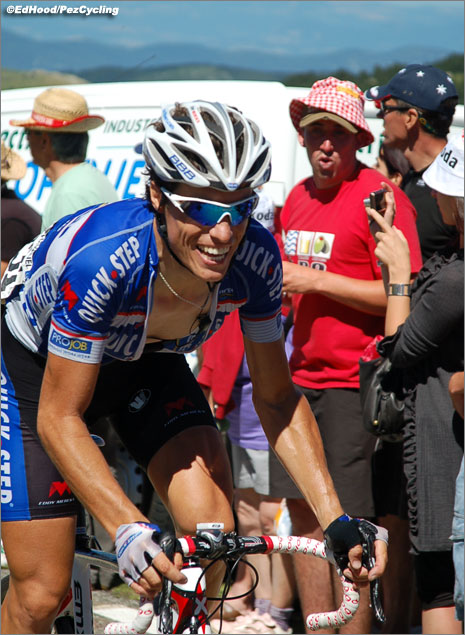 18) The Pyrenees: Majestic, savage, brooding, remote – one day we’ll visit when the Tour circus isn’t there. 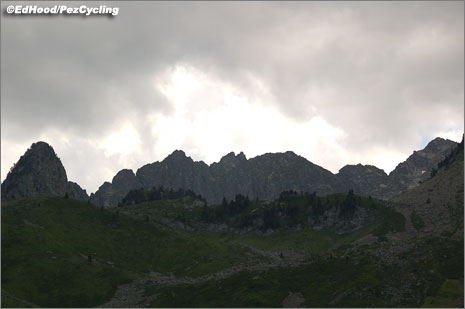 17) Footon: Those who deride this team haven’t thought it through; Rupert Murdoch and US corporate giants can’t sponsor every team. In the mountains they rode with passion, a second and a third place on mountain stages – a better result than some teams we could mention and young riders ‘blooded’ in the Tour – nothing wrong with that. 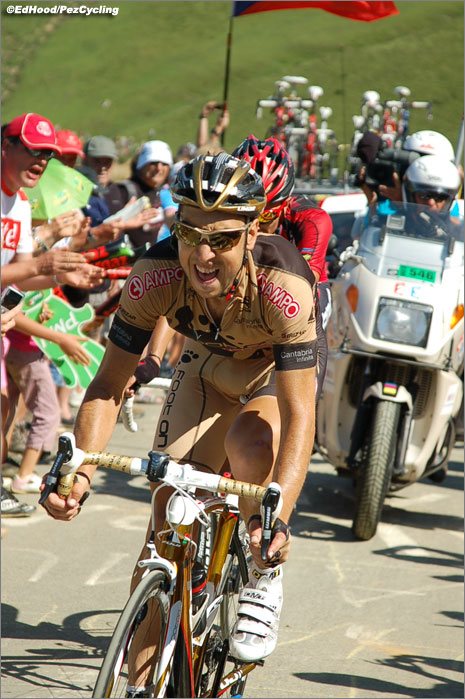 16) Bordeaux: Dave was talking about how he used to watch the run-ins to Bordeaux on TV back in the 80’s and think what a grotty place it was. But the old girl has had a make over; we were won over – clean, gentile, we loved the mix of old and new. 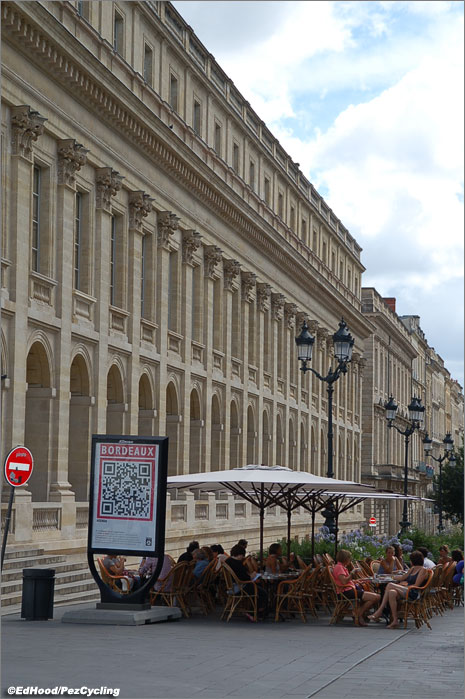 15) Thor: He’s not as quick as he was but you have to respect the man, ‘never say die’ is his motto. He beat his chest when he won on the Arrenberg stage; ‘me king of the cobbles!’ for sure, Thor. His battle with Petacchi added spice to the race. 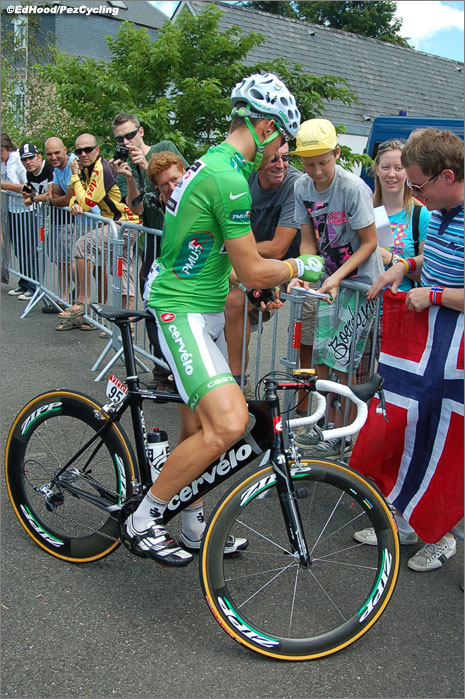 14) Mende: We’d just arrived from the standard test of human will that is the journey to the Tour – and bang ! There was Bert at the front on that steep climb to the airport, it was what we needed to revive us; ‘gracias, Alberto.’ 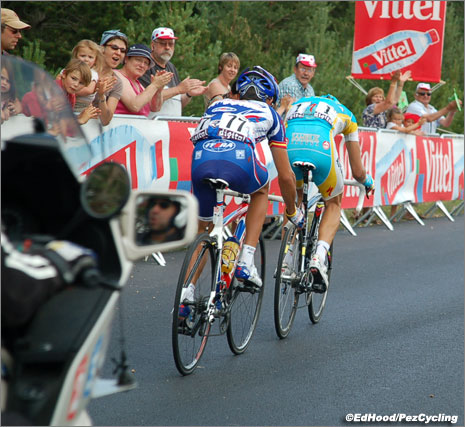 13) Radio Nostalgi: OK, OK, you have to put up with the ‘Bonnie and Clyde’ song and Johnny Hallyday but Barry White and Donna Summer back to back ? – enough said! 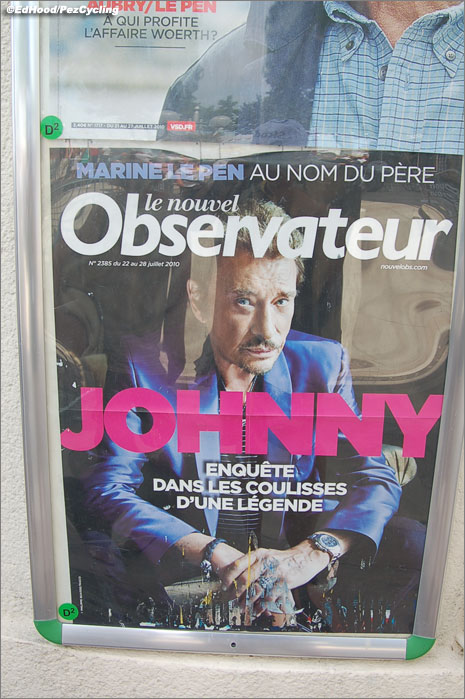 12) Les Landes: One of the joys of covering le Tour is that you get to visit parts of France that ordinarily you might never see. Les Landes, flat, wooded, remote, quiet and a little mysterious – another place we’d like to visit when the circus isn’t in town. 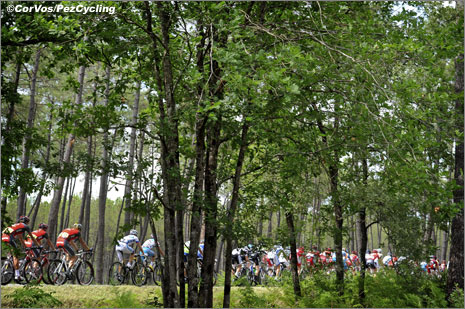 11) The French riders: Chavanel was the catalyst, I can just imagine the French team DS’s ranting to their men between deep draws on a Gauloises that; ‘if he can do it, so can you!’ Tommy Voeckler, Christophe Riblon, Pierrick Fйdrigo – and Sandy Casar with Mark Madiot almost in tears when his ‘boy’ won; we love that. 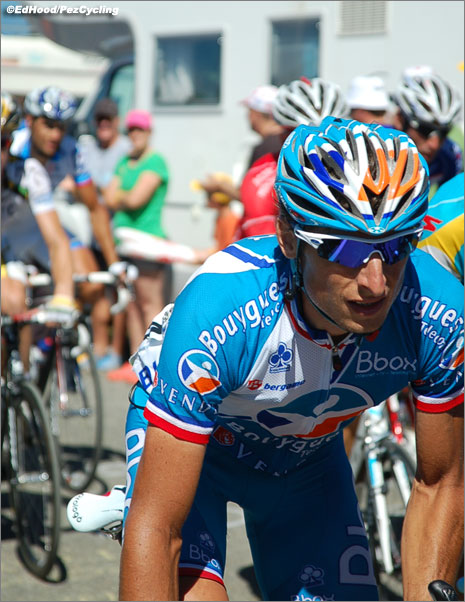 10) The Tourmalet: Huge, awe inspiring, so tough, we were there at the summit in the mist with Jean Pierre Danguillaume and then the riders – respect to every one of them. 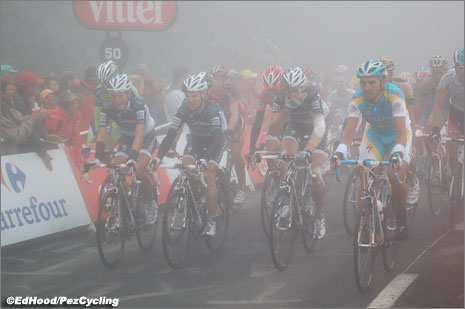 09) Ale Jet: Let’s hope that he doesn’t disappoint us with what’s going on in back in Italia. The king of the drag racers, that acrobatic stuff isn’t his bag, but when it’s down to straight line, raw speed – he’s still a force. Two stages and the green jersey made up for Cunego’s invisibility. 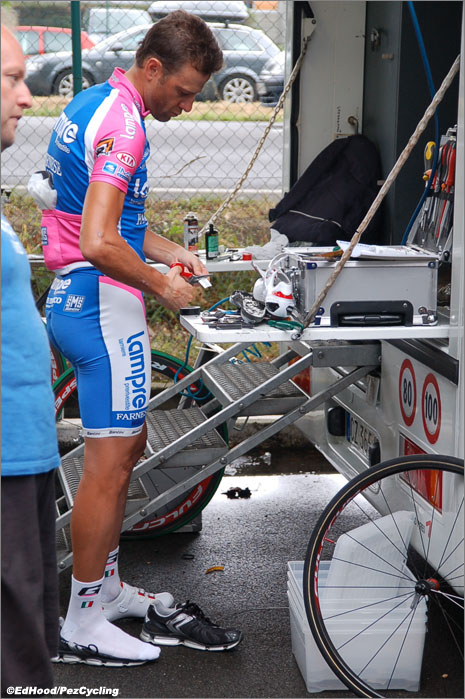 08) The Medoc: Another new area to us, those vineyards are so easy on the eye and the soul. Some of the villages don’t even have a bar – that’s quiet. 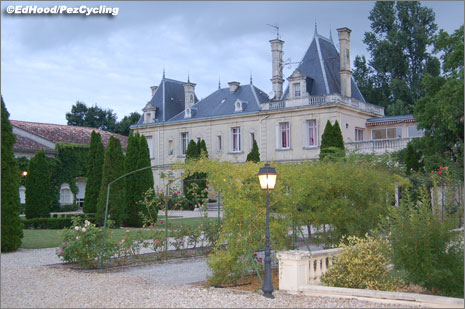 07) L’Equipe: Their coverage is wonderful; they don’t pull punches but are fulsome with their praise, when it’s due. I haven’t recovered yet from not being able to grab my copy at the first newsagents we pass, each morning – or even better, a free copy bouncing off my head from the L’Equipe wagon in the caravan. 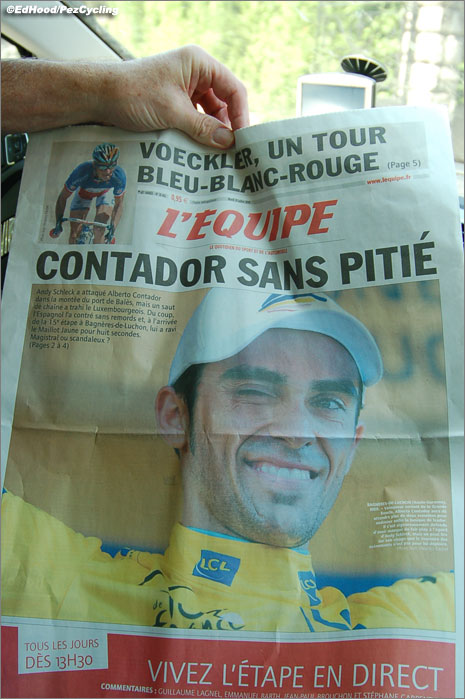 06) ‘The bubble’: You’re sealed within it, world news – what’s that? friends and family – who? Reality takes a lot of getting used to, again. 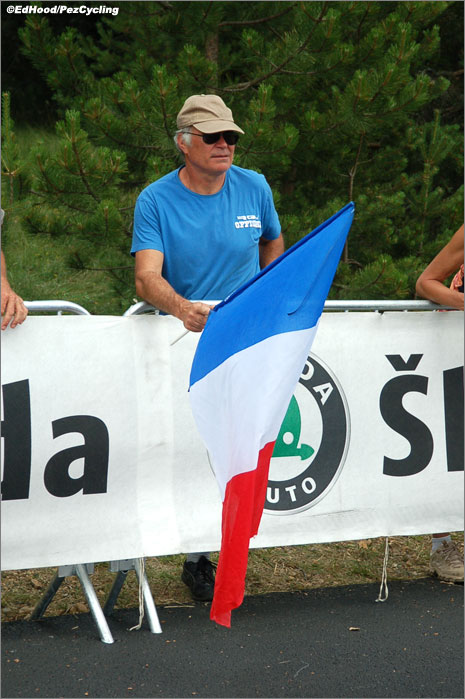 05) Columbia and Cav: despite their ‘whole world’s against us’ rap, you cannot fail to be impressed by them. After the ‘Vino stage’ we said to Allan Peiper that we’d been surprised to see them committing with 125 K to go. ‘It was 180, actually,’ came the reply – that says it all. And Cav – whilst there’s perhaps a hiatus in the world of sprinting with Petacchi and McEwen past their best years and Farrar crashed out, Cav can only beat who’s there. He did so with ease, the loss of Renshaw making not one jot of difference to his last 200 metre prowess. 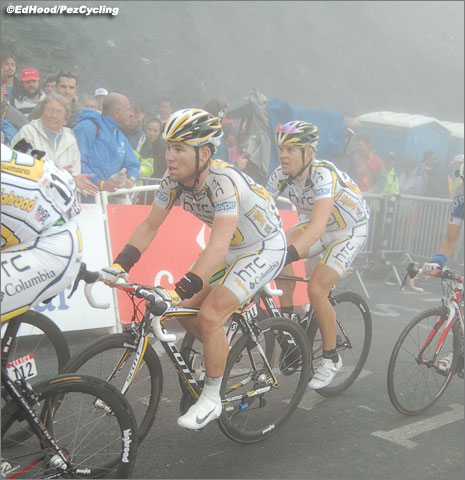 04) The laps of honour: Instead of the race coming to a dead stop after the podium, the laps of honour give the fans an opportunity to see every rider and pay their respects – likewise it gives every rider the chance to have a little glory and properly savour what they have just achieved. 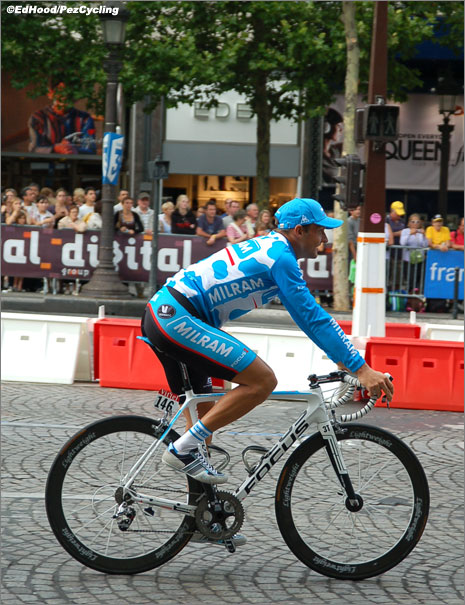 03) People: We met old friends – Alasdair Maclennan and his wife Marion, ‘Ed the Pole.’ And made new friends, Dave Martin who provided our accommodation – and the newsagent in Bordeaux who’d drawn a blank on the caravan goodies. ‘Chapeau?’ he asked me hopefully as he passed me my L’Equipe. I trotted back to the SEAT and returned with Skoda and Carrefour hats – friends for life. 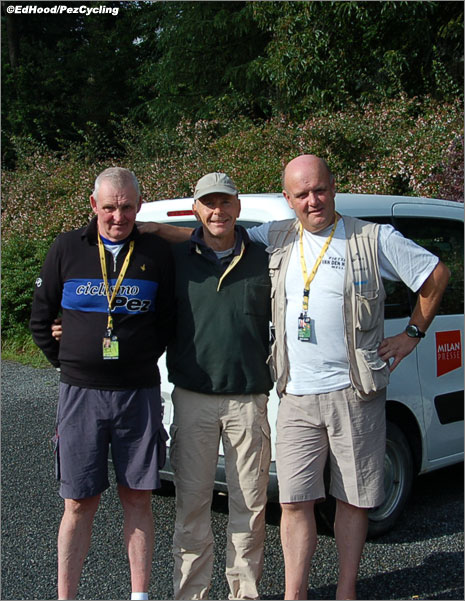 02) Paris: Whilst it may seem that you have a sign on your forehead which reads; ‘please rip me off’ it’s still a magical place and the sheer sense of occasion when you drop down on to the quai alongside the Seine for the run in to the finish circuit is palpable. 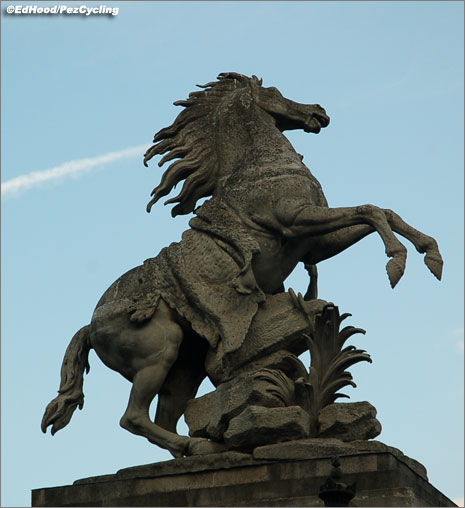 01) Le Tour: Too many ‘janitors,’ over commercialized, not like it used to be, some good teams not riding, too much hype? 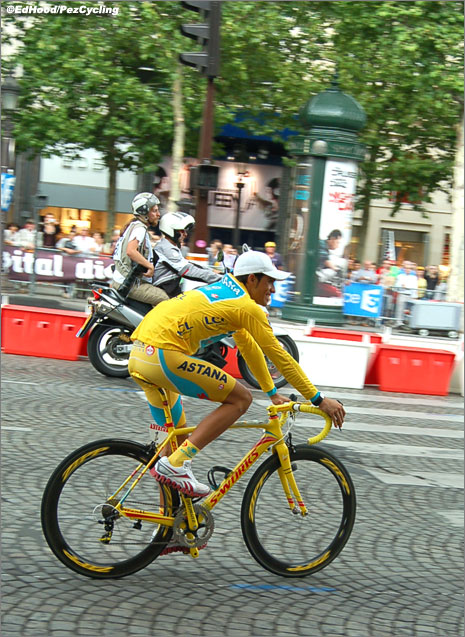 But is it still the greatest show on earth?