Roadside St. 12- Finish: Ca va? You know you’re in the south of France when: it’s so hot you can’t touch the car’s paint work, there are fortresses on every hill top and you can buy today’s L’Equipe. 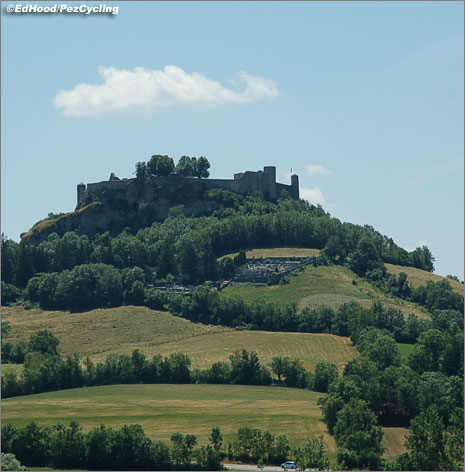 Back in Bonnie Scotland we have the fortresses too, but it’s raining as if there’s no tomorrow and L’Equipe is running two days late.

‘Red file for Renshaw’ says the headline – and there’s even speculation that Cav should have been declassed too.

With the Tour just half way through we thought we’d have a quick look at which teams have suffered most; Footon-Servetto have lost three riders, Garmin, Katusha, Lotto, Columbia, Milram and Euskaltel two each – it hasn’t been an easy race.

Taxi to the station at 19:15, train to Carstairs, change for Penrith, meet Dave there in McDonald’s – he’s working at the nuclear power plant at Sellafield – Dave drove south most of the night through the rain, Stansted airport near London, plane to Rodez for noon.

It took a couple of hours to get from Rodez to Mende, then all of our persuasive powers with the gendarmes were required to get on to race route for the last seven kilometres up to the press room – and our creds – by the finish at the aerodrome by way of the Montee Laurent Jalabert

Much as I love France, I’m not into every rider having a nickname and bits of road and bridges getting names – ‘Pont Gilbus?’

By the time we had the essential pieces of plastic in our hands there wasn’t time for much else but to walk a kilometre or so back to the top of Montee Laurent Jalabert and watch the fun.

The crowds on the way up were good but it was easy to get a decent spot at the banner. 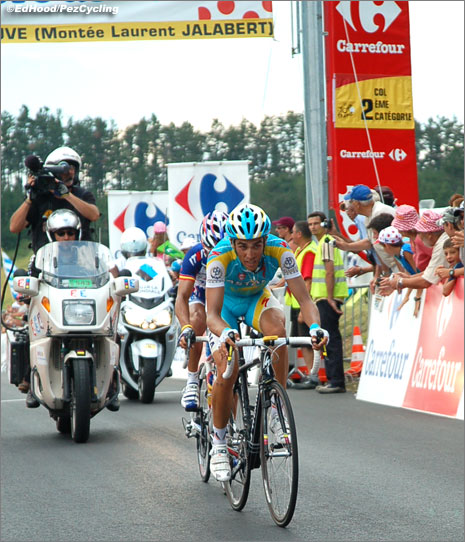 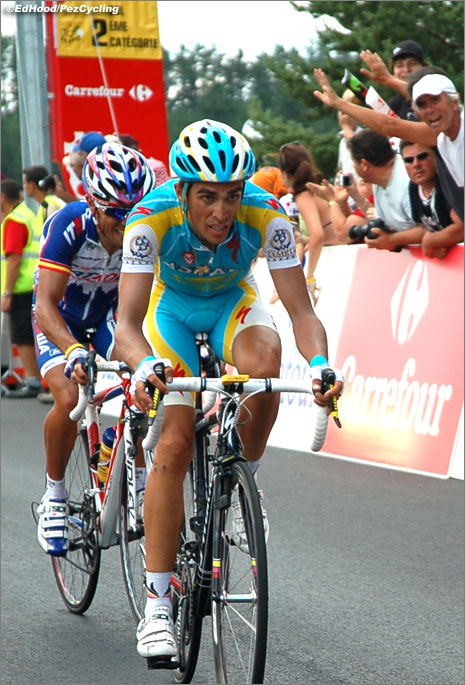 ‘Contador!’ said Dave as Bert whistled past we did think those reports that he was on the way out because Andy put ten seconds into him at Morzine-Avoriaz were a tad premature. 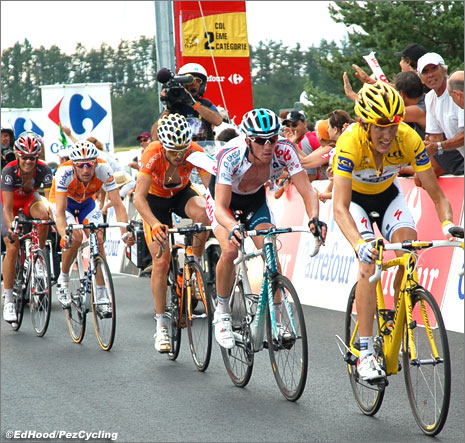 Schleck’s face showed the strain of defending a yellow jersey whilst Menchov simply got on with it. 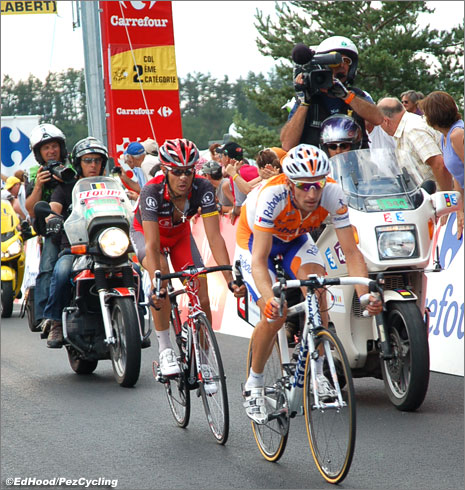 Kreuziger led Leipheimer and Gesink, two from the future and one from the past. 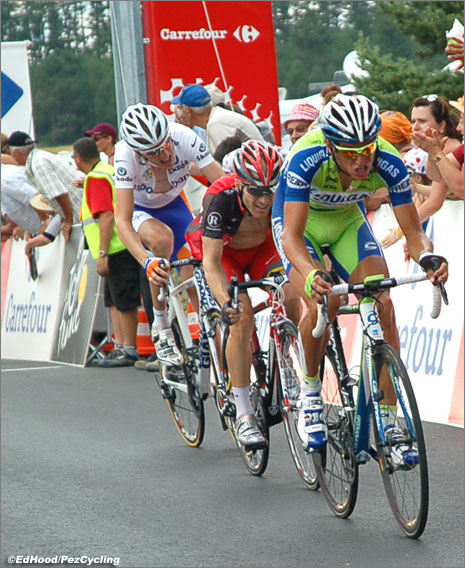 Liquigas’s other challenger, Basso, was off the Kreuz pace. 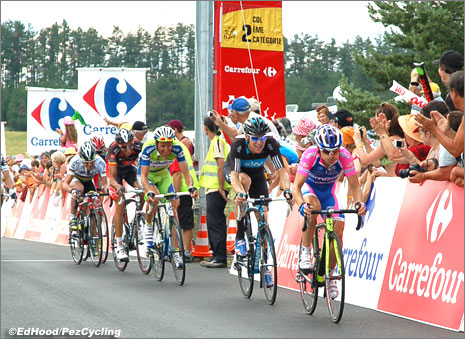 Kiryienka was paying for all those breakaway efforts and Russian champion Kolobnev was hurting, too. 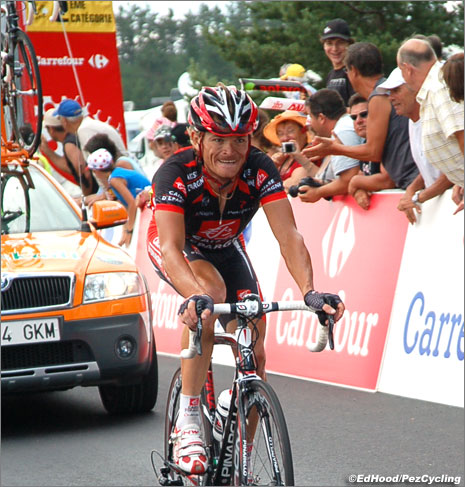 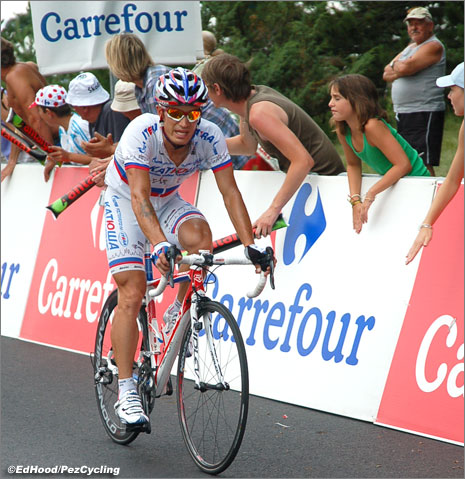 Voeckler got the biggest cheers whilst Lance laughed. 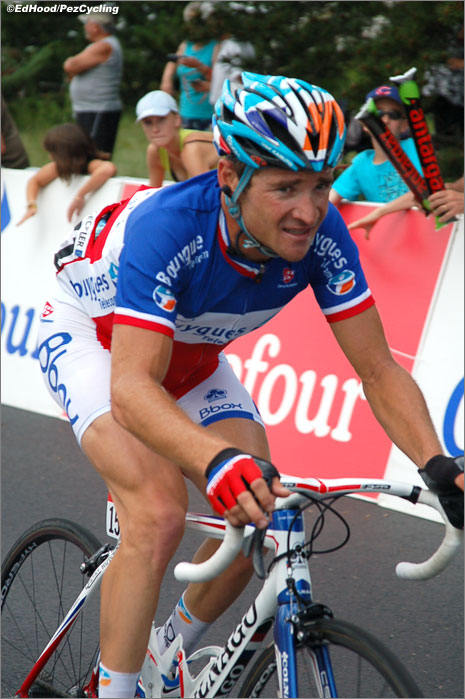 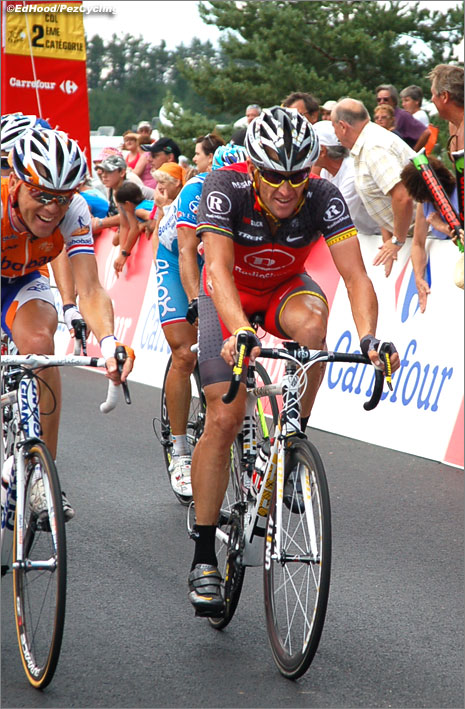 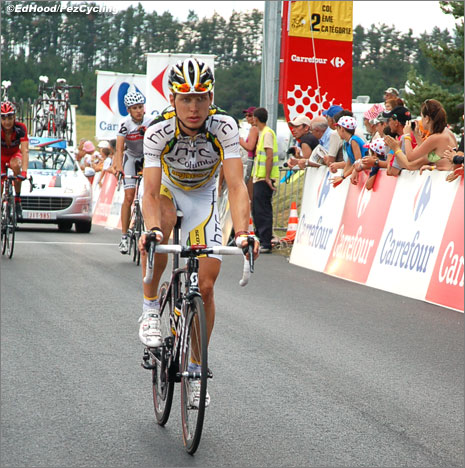 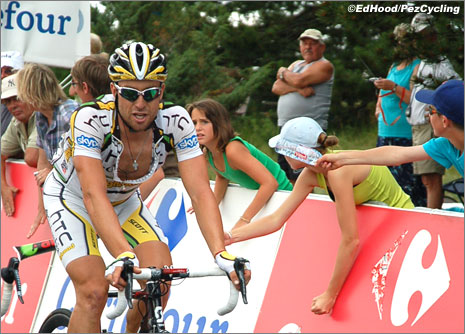 It wasn’t long before riders started to appear from the opposite direction to head down to the busses; Lance (and minder) was one of the first. 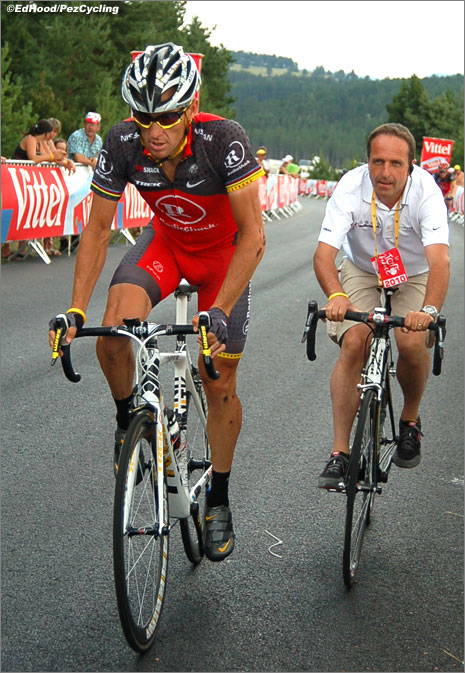 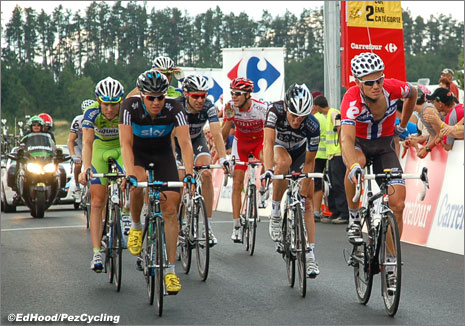 Mick Rogers looked sore and empty as he headed for the bus, a bloody shoulder told us that he’s been on the deck. 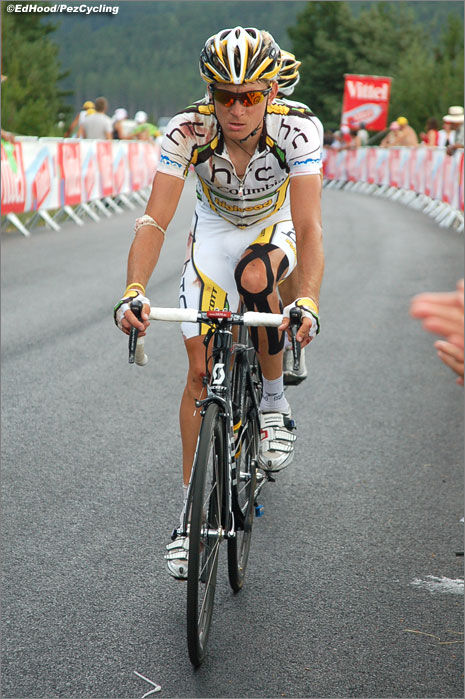 Serge Pauwels enjoyed a Coke as he headed for that 700 grand Sky bus; David Zabriskie was still racing but acting the ham. 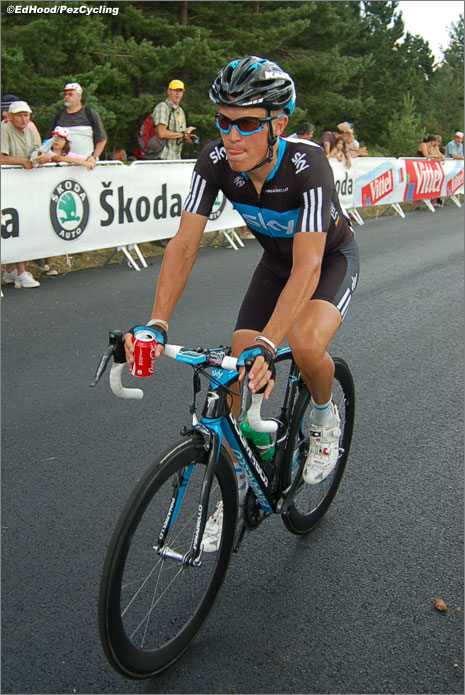 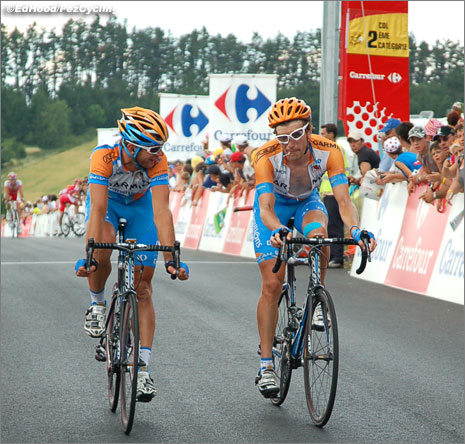 David Millar and Cav are both hurting, the Scot from the pain of tasting too much tar; the Manxman from losing his ‘pilot fish,’ Renshaw. 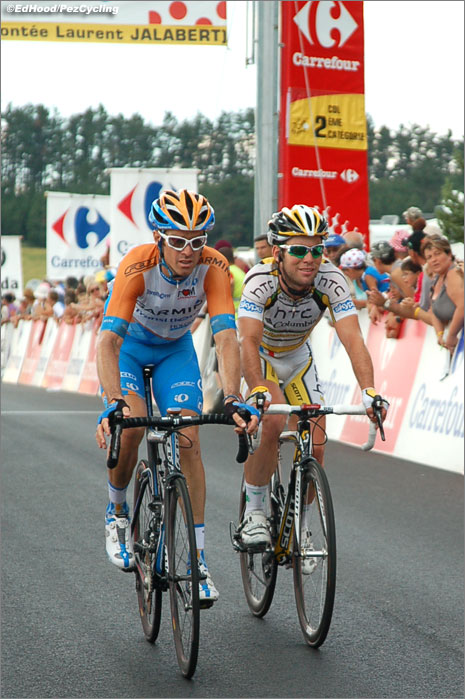 Cancellara didn’t look quite so Fab as he did in week one. 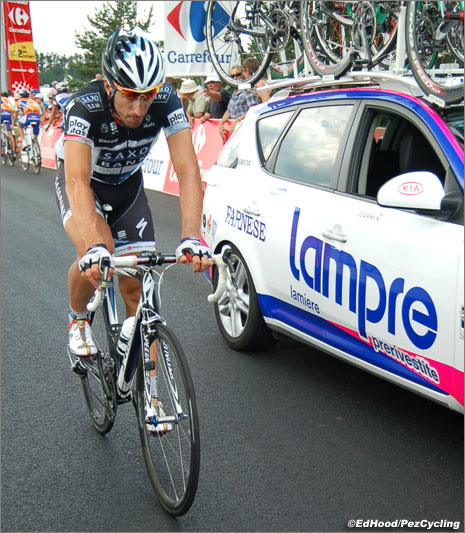 The experienced pros like Eisel, Martin and Cav all had gillets on for the descent. 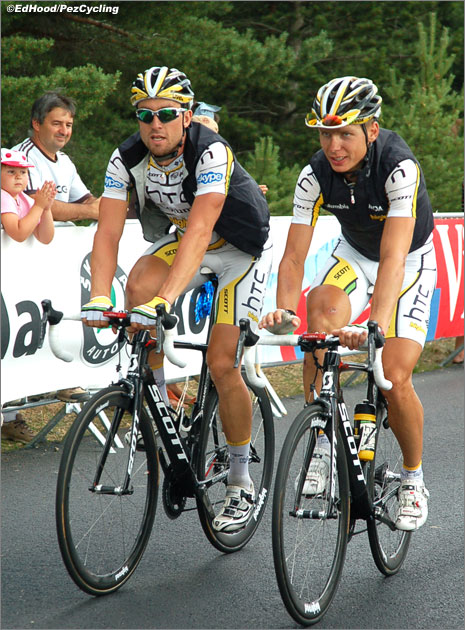 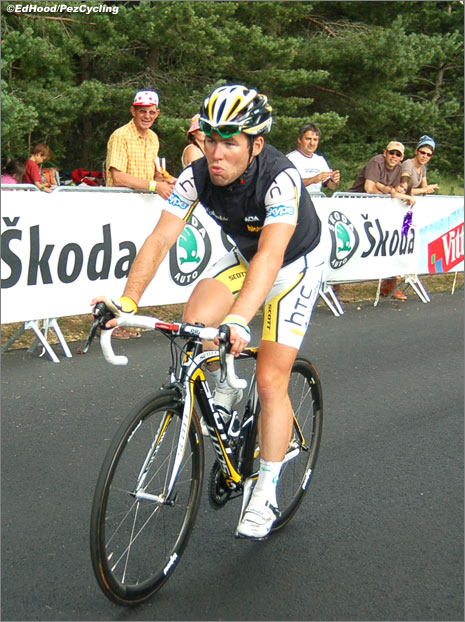 The Sky boys and Dan Lloyd managed a laugh as they chatted on their way off the hill; Big Dan even gave us a wave. 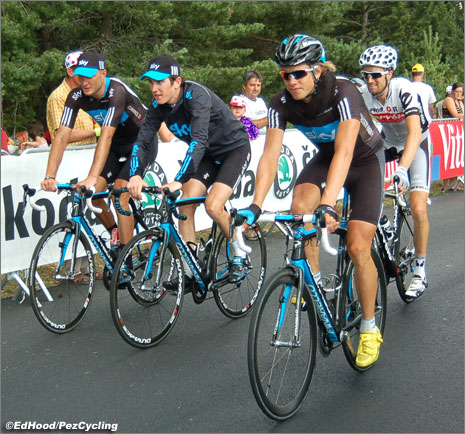 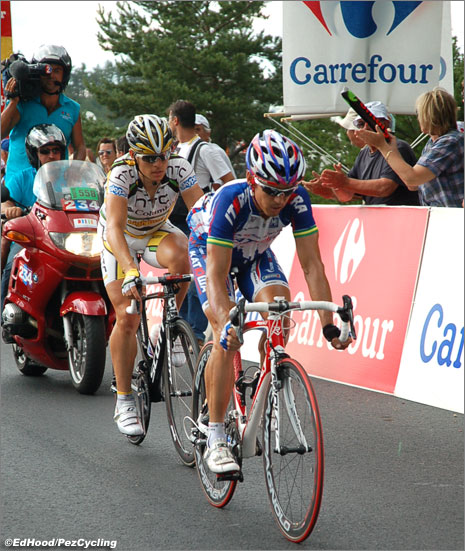 Well, we’re on the Tour and very happy to be so.

It’s our privilege to take you all the way to Paris with us – we’re looking forward to it and hope you are too.