Roadside St. 10: On the French national holiday, the stage running from Chambйry to Gap passed by the stomping ground of one the lost lamented heroes of French cycling’s last star generaton. The ‘Eagle of Vizille’ isn’t soaring in the mountains anymore, but by way of tribute to Thierry Claveyrolat, we just had to start our day in his hometown.

10am: The town of Vizille isn’t quite en fйte yet, but it’s shaking itself into life. The road crew has emerged to start to put in place the crowd control measures that will protect the peloton from the fans (and vice-versa) as they fly through the narrow streets. 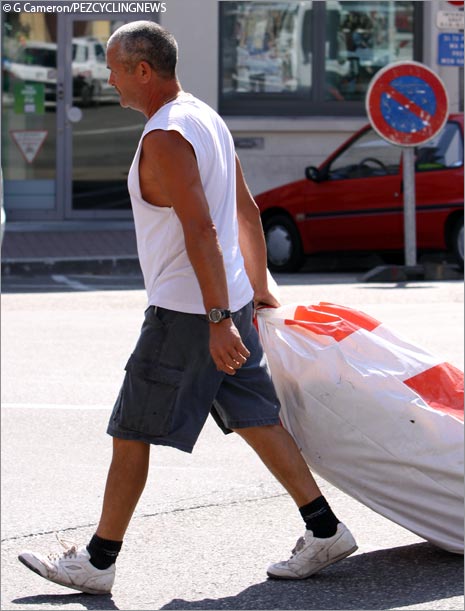 It’s a pretty leisurely effort though, as a kids’ carousel squeaks lazily round at the end of the street and given that the pharmacy display reads 10:04 am and it’s already 27°Celsius, you can forgive the slow start. 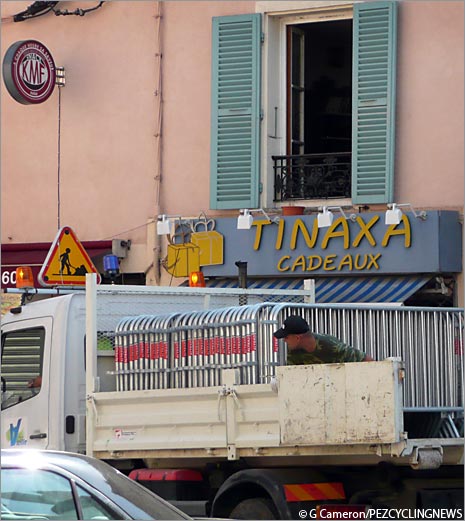 We chanced upon a guy who might well have seen the race come through here more than once or twice. “Back in my day, we didn’t need direction arrows to follow the race. We just kept riding until only one man was left alive and he was declared winner. It was better back then, not like …” 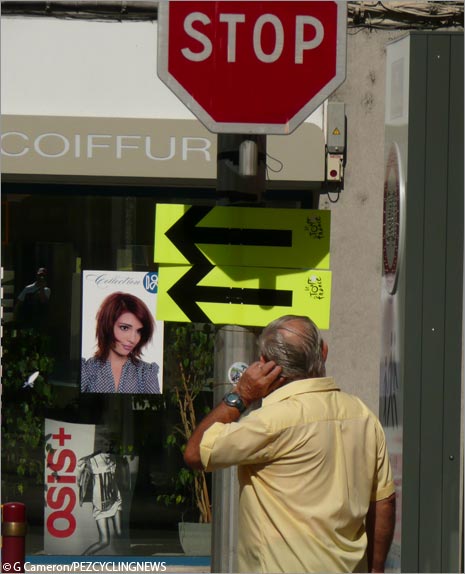 A trio of youngsters watch the race preparations crank into action from the safety of their window, above the street. 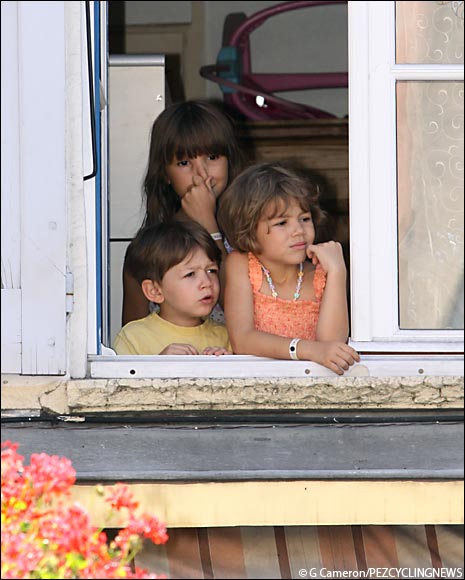 Around the corner, life goes rolling on by. The Tour is coming, but there’s daily bread to be bought and gossip to be exchanged. 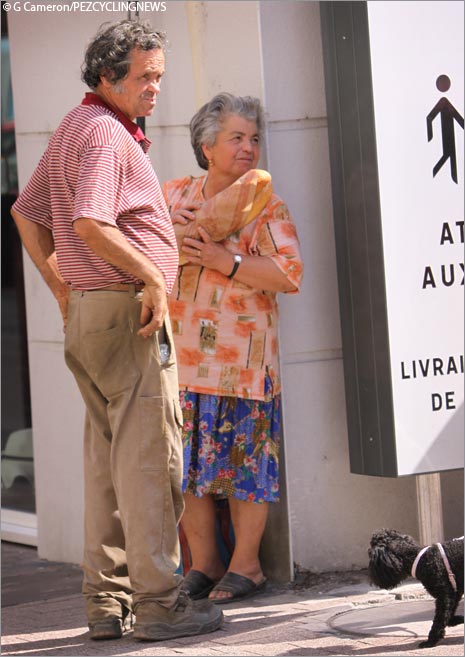 We decide on a quick drink stop and feel right at home at ‘Le Pub’. Catherine and Nicholas are running the show here. Her favorite rider is Lance Armstrong, but he won’t win today. “Maybe Chavanel? For Lance, no, but in the Pyrenees, fusil, fusil, fusil!’, she laughs, hoping Lance will go out in a blaze of glory. Nicholas remains stoic: he’s from Luxembourg so it’s Andy Schleck all the way for him. 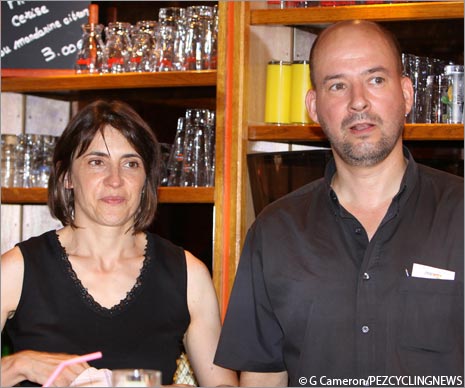 Up above the bar, the heat of the day is blocked out by gloriously colored shutters on race-appropriate colored walls. 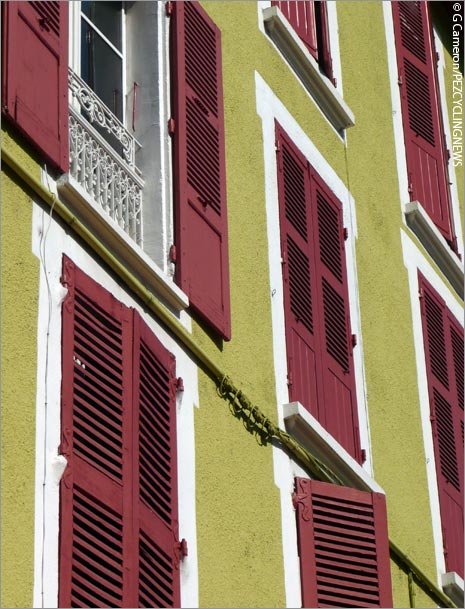 It’s drinking up time, and curiosity gets the better of us when we hear a series of bangs followed by laughter. If in doubt, always follow the bangs. Under the clock tower opposite the Rue de Stalingrad, there are explosions. 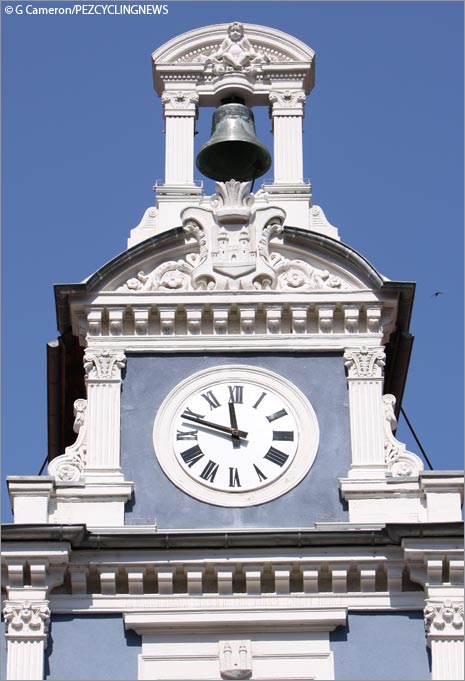 Teddy and his buddy Alexander were busy lighting firecrackers and pulling some neat scooter moves. In fact, so keen were they to keep the revolutionary spirit alive that Alexander legged it to the local armory (I guess) for more supplies so we could take a photograph of them in action. Who do they follow? It’s Lance again, and I’m getting more astonished that Armstrong is so popular. 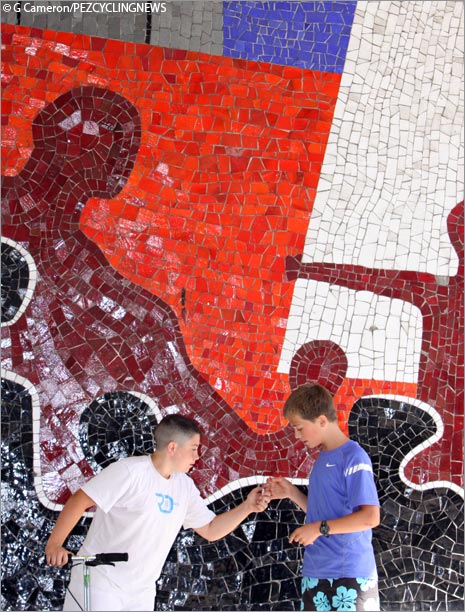 The Museй de la Revolution Francaise is a stunning building, dominating the southern approach to Vizille, with well-manicured, orderly lawns to commemorate such momentous times. 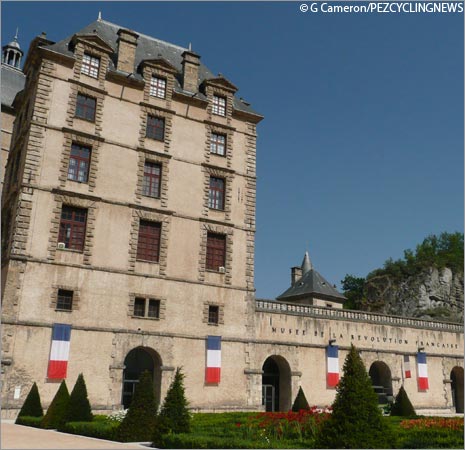 It’s back to the car, through one of the amazing tunnels around here, hacked through the rock with a certain ‘artisinal’ finesse. 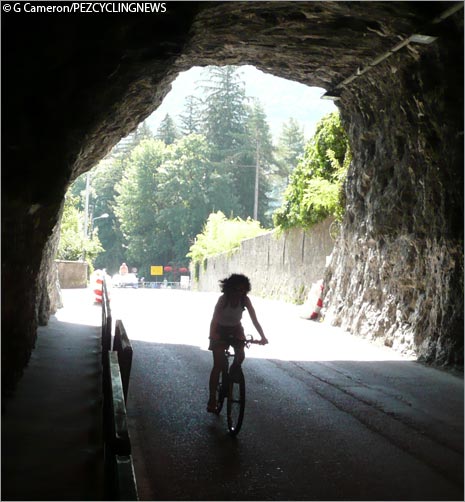 We’re going up the Cфte de Laffrey, a short, sharp shocker of a climb. For any rider falling off the back here, it won’t be easy to stay in contact. The signs don’t lie – it’s nasty. 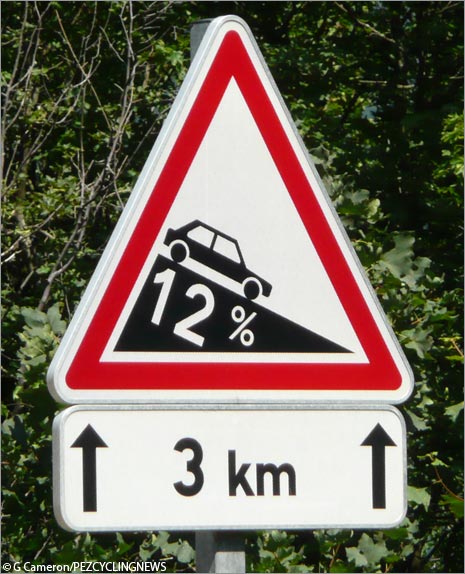 Riders wheeze, race, walk, limp or batter their way past. The foursome you’ll see later on kindly share some drink and an invigorating, cooling water spray with a guy in full Radioshack kit, while this kid makes things look a bit easier. 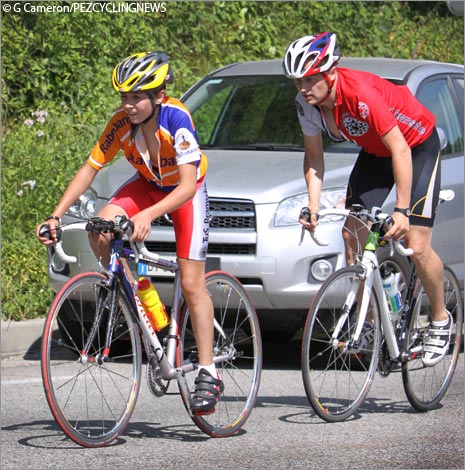 We take a position about half way up to watch and wait, stuff down a few sandwiches and shoot the breeze with some of the others patiently watching for the first signs of race activity. A father and son set up camp just behind our car, and they make such a great picture opportunity that we strike up a conversation. For little Victor, it’s already his second Tour de France, and we couldn’t believe how well behaved he was, sitting with his dad Stephane for the race to go by. 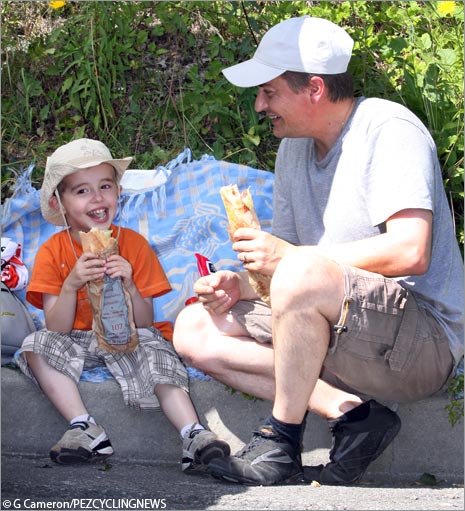 This is a big day because it is France’s national holiday, right? Wrong. It’s because of the Tour: “Every year as soon as the route for the Tour is announced, I book a day off work the next July to come to see the Tour, and now I can take Victor with me. The Tour is special. Everyone is together, there are no social divisions.” Luckily for Stephane, this year’s stage of choice fell on Bastille Day meaning it was easier to get off work!

“It’s a ‘traditional’ day. Fathers take their children to see the Tour, like their own fathers used to do with them when they were young. For us, we start our day with a visit to the bakery so that we can make our sandwiches.”

Who is Victor’s favorite? “The yellow jersey …. and the caravan!”

The caravan honks and heaves its way into view, and Victor is ecstatic, under his Dad’s watchful eye, but leafing around in his safe zone, waving at the giant duck, the Caisse d’Epargne race horses, the massive Panache bottles on wheels. It’s wonderful to watch his excitement from the other side of the road as little Madeleine cake packets, key rings, hats, t-shirts and bags land at his feet. 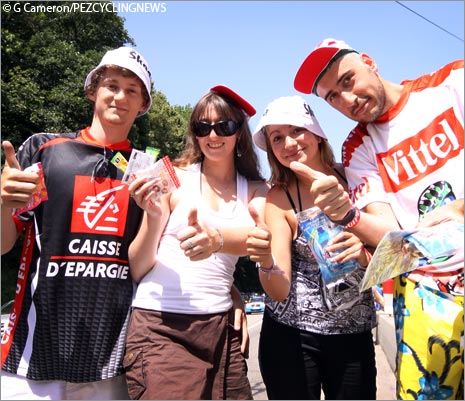 The older kids get in on the act, too. Alexander, Lucy, Caroline and Vincent are having a whale of a time from their temporary encampment, eating, drinking, laughing and forgetting about their day jobs.

Everyone wants a piece of the Tour, even if you sometimes get handed something and you can’t immediately figure out what the hell it is. 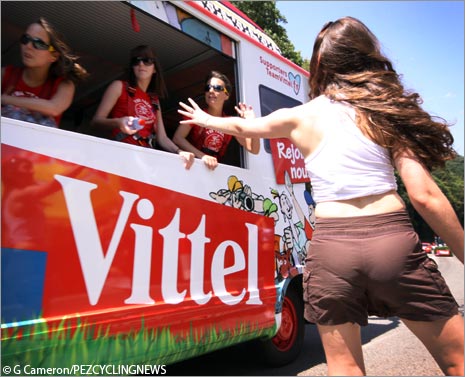 We have a cool conversation about Holland hosting all three Grand Tours in a year with Arjan and Herman. “We’re great at organising the Tours, just not so good at winning them”, laughs Arjan.

The guys are training buddies, and will be cheering for Gesink and Menchov today, even though they don’t expect the GC guys to do much on this stage. We show them the Tour roadbook so they can see if Rabobank will be staying anywhere near them when they go to see the Tour in the Pyrenees next week, but we’ve left the book on the car dashboard, and it is – actually – too hot to handle! 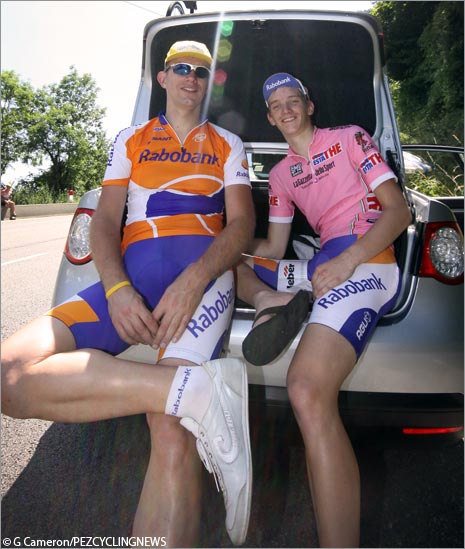 The caravan has been and gone, and it’s a hush on the Cфte de Laffrey. Fans are starting to pace nervously, leaning their heads out of ‘their’ staked-out territories. The vehicles start streaming through, the helicopters clatter overhead. Looking down across the road, you see fans start to hammer their ‘thunder sticks’ together; the gendarmerie bikes glide slowly into view. The break is here … 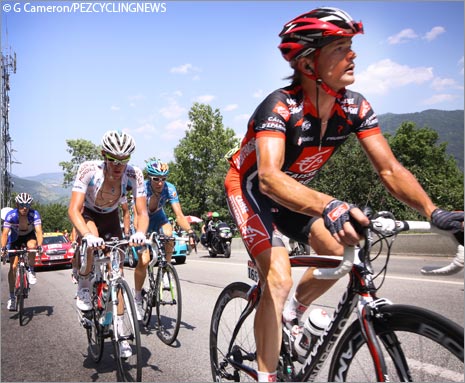 The sun screams relentlessly down on the riders here, right into their eyes. They mostly keep their heads down, gazes fixed on the road in front of their wheels. The minutes click by and the field suddenly appears, melting across the road. Astana are prominent, shirts unzipped to the waist. 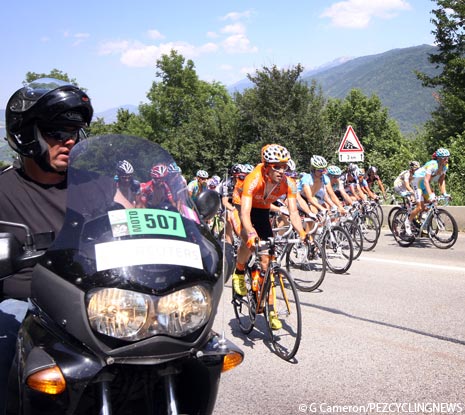 Andy Schleck is off to the side of the field, looking for water, but he looks so easy. Maybe he’s going to topple Contador this year after all? 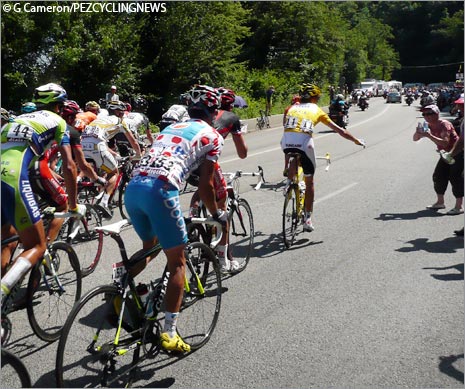 Juanma Garate is looking a little more hot and bothered in the main field as he hauls himself skywards, and out of sight. 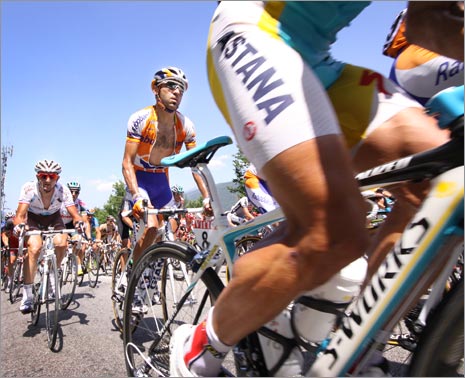 It’s time to go, so we hand Victor another little souvenir and jump in the car. The Bastille Day crowds mean our hotel is a couple of hours further away than we’d hoped, but the Au Relais de Chabriиres is well worth the visit and the owner and his wife do a fine job of fixing the Wi-fi when it mysteriously collapses. Merci. 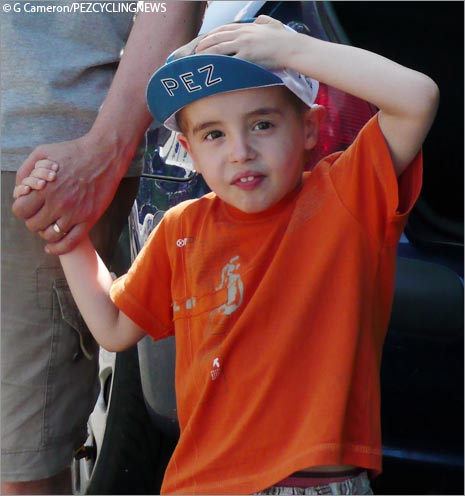 Tour Coach: Making the Shift From Domestique to Winner