Roadside St.18: Is Contador on the way out? Why is Cav out of the running for the green jersey? Who’ll win the final time trial? Can Robbie McEwen win one of the last two stages? And why isn’t Ivan Basso going well? At the start of stage 18 at Sailes-de-Bearn, we asked the men who know better than most the answers to these questions. 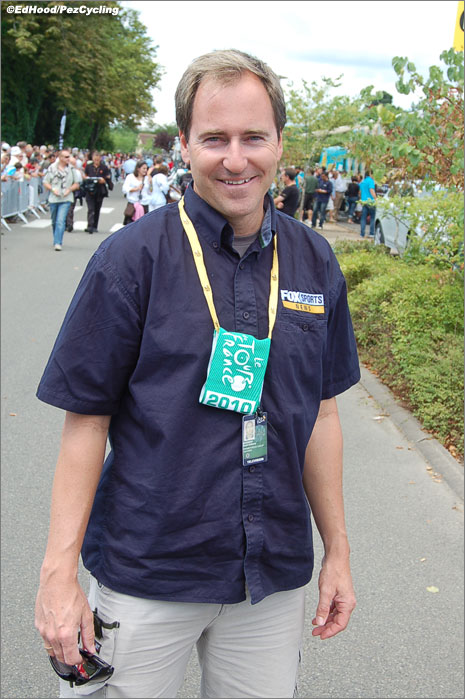 PEZ: Is Schleck better than Contador?
Andy’s the under dog and people always want to see the champion beaten; he speaks English and people think they know him. Alberto is reserved and doesn’t have the confidence to do interviews in English. And last year we had all of Lance’s spin where he was painting Contador as a bad man. I was talking to one of the guys from SRAM and they were saying that Contador is a very nice guy.

I do think though that Schleck had the better of Contador on the long mountain climbs; look at the way he came back after the incident with the chain – he was flying. The time trial is the thorn in his side, but I think he’ll go better in that than people think, he’s stronger this year. When we interviewed him the other day he told us he thinks he’s stronger than Contador was at the same age – and he’ll be stronger next year. 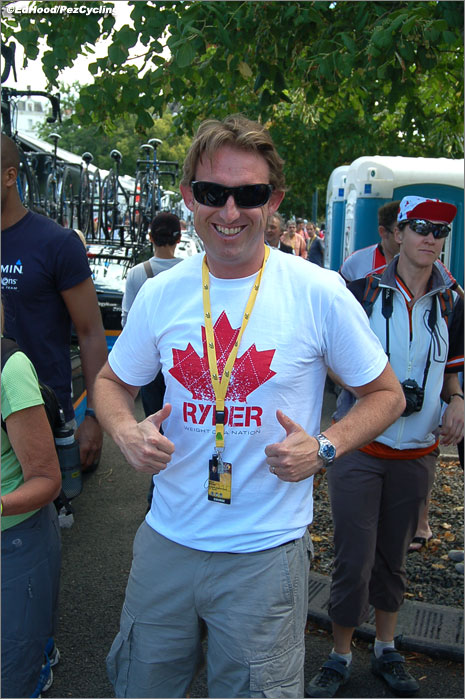 PEZ: Can Ryder make the podium, next year?
Let’s take it one year at a time! With Christian (Vande Velde) and Tyler (Farrar) out, Ryder has taken the opportunity to step up. Remember, he’s a rider who’s had good results, fifth at San Sebastian and second in the Amstel. What we’re looking forward to next year is having two guys to challenge for the GC – Ryder and Christian.

Tomorrow? the time trial isn’t his forte but he’s been Canadian national champion at the discipline – I think best case scenario would be sixth and worst tenth. But remember that a time trial on the second day is very different from one on the second last day – it’s a very open race. 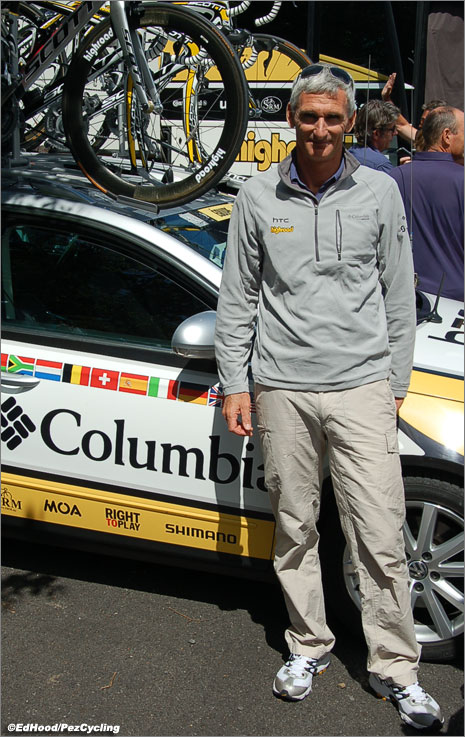 PEZ: Cav lost his green jersey chance early, why?
He’d had an up and down season before the Tour and in the early stages of the race he’s always touch and go – it takes him a little time to find his groove. And that stage into Brussels was very nervous. He’s won three stages and but for Vinokourov it would have been four. People said that he couldn’t win that stage (stage 13 into Revel) because of the climb at the end, but remember, he’s won Milan-Sanremo and a stage in last year’s Tour with a second cat climb in the final kilometres. I don’t think a break can stick to Bordeaux, if you have the best sprinter in the world on the team – like we do – then you have a reason to ride at the front and keep control. On stage 13 we committed with 180 K to go – Bert Grabsch did a great job – we figure it’s better to keep a rein on things and not let a break get to much time, it just makes it all the harder in the finale – if we get help then that’s great but we don’t expect it.

[Editor: And so it was…Cavendish took his fourth win at this year’s Tour de France in Bordeaux this afternoon.] 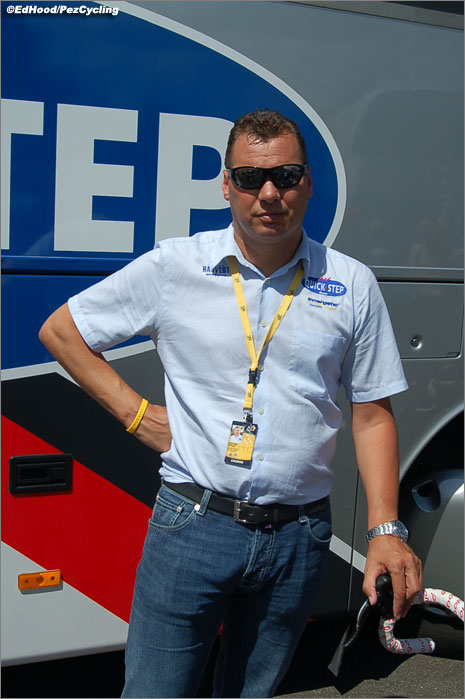 PEZ: A good Tour for QuickStep, but who’ll win the time trial, tomorrow?
Yes, a good Tour for us, we’ve won two stages, held the yellow and polka dot jerseys and I think we’ve been in a total of eleven breaks. The team came into the race very motivated and it shows in the results. Today I think that if a break of three or four goes then it will end in a sprint; but if eight or nine get away then they may succeed – the sprinters’ teams are all very tired. The time trial – Contador will win by 35 seconds. 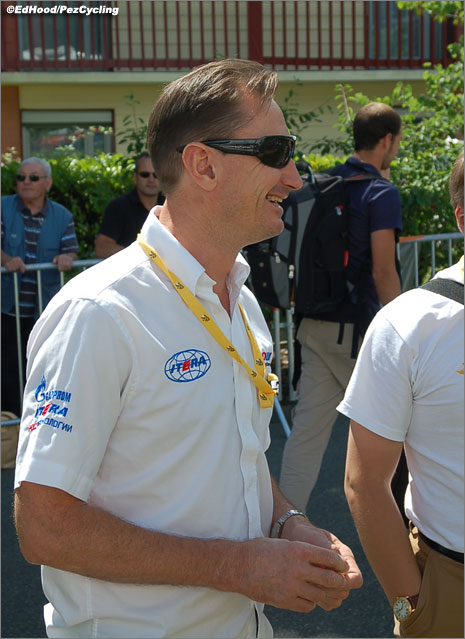 PEZ: Can Robbie McEwen win today into Bordeaux or on Saturday to Paris?
Well, we’ve been waiting three weeks on these two stages, so I hope so! GC-wise, Rodriguez, our climber will have difficulty defending his position in the top ten in the time trial.

Contador? the journalists have to talk about Schleck, it’s not interesting for the public if they just say that one guy is twice as strong as everyone else! 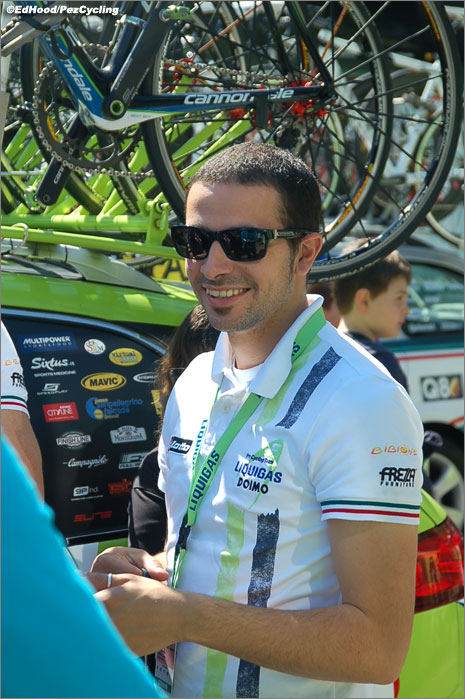 PEZ: Why isn’t Ivan going well?
He’s had bronchitis; we’d hoped for different but we must accept it. He hadn’t fully recovered from the Giro – but he’s determined to go all the way to Paris, that’s very important to him in his first Tour back. It’s also important to us to finish with all of our athletes; we’ve finished nine riders in our last five Grand Tours. In the time trial we hope that Roman can defend his ninth place but Horner is very close.

A top ten place for Roman would be a very good result for a young rider like him.

***
Time for PEZ to head for Bordeaux.

Tour Coach: Equals in Mountains, But Not Against the Clock