Roadside Stage 8: After Saturday night’s mayhem, an executive decision was taken to skip the drive to baking Morzine and have a more leisurely day half-way along the race route. It wasn’t just the reduced kilometres that revived me, but the feeling of being a fan again, a kid again. 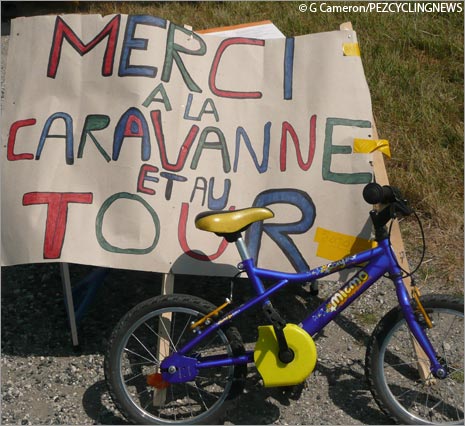 It’s always been this way, I’m a fan of cycling, and it’s no shame to admit it when there are so many people who’re only too happy to point the finger at our sport. Out on the road today, with the first big appointment in the mountains looming, their were others who shared their feelings with me and made me know that I’m in large and welcoming community, not some niche sideshow follower.

We trundled out of Ferney-Voltaire and made for the race route to the south-west at Valleiry, with the idea of staking out the feed zone to watch the caravan roll by. It’s always worth seeing, just to witness the pandemonium that accompanies it as everyone – the sensible Dad, the super cool Lothario, the perfectly manicured teenage girl, the decrepit great-grandmother – forgets their current role in society and acts ten years old again.

The sunflowers were a glorious bright yellow backdrop to the events at La Rippe, kilometre 93.5. The temperature was in the 30s Celsius again and the locals were frying, too, not just the pasty Scots. 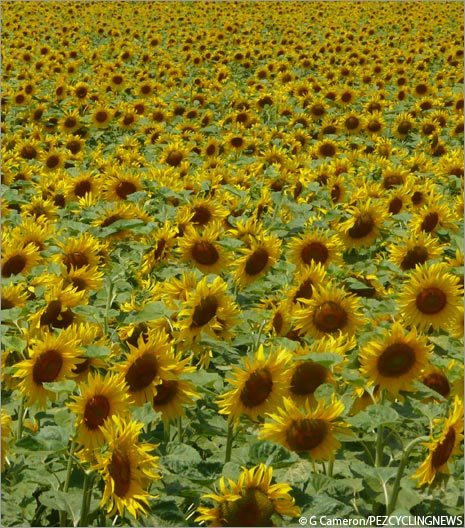 Anyone who had a parasol had a lot of new friends; a kid in front of us swiped the ice packs from his family’s cool box to try and reduce the heat in his head. Valerie spotted a couple of kids daring each other to touch the scorching tarmac with their bare hands. By next Christmas, Russian Roulette will be sooo passй. This pair, above, had the right idea: a big parasol, a field to themselves and a couple of mini vuvzelas to honk out their appreciation. 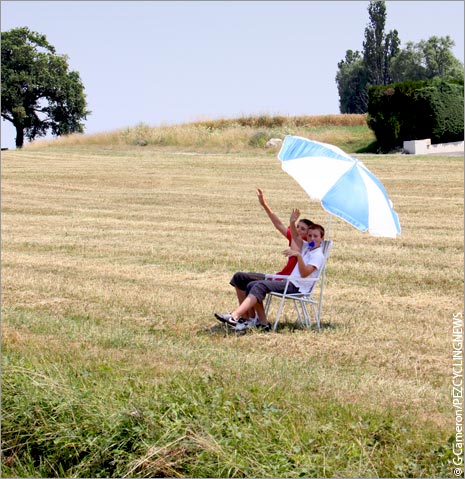 It’s not straightforward being a supporter on the roadside on a day like this, with all the logistics of getting to your spot and hoping you remember everything. I watched one old fella go from nodding off, to sleeping standing up to practically collapsing before he fled to the safety of his Carrefour-decorated caravan. 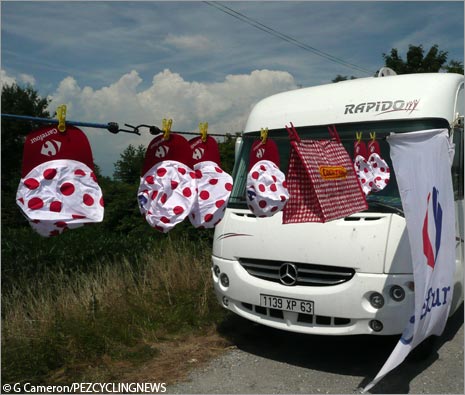 Up the road a little, an older lady was stretching out those quads for the next half-hour of standing and cheering. 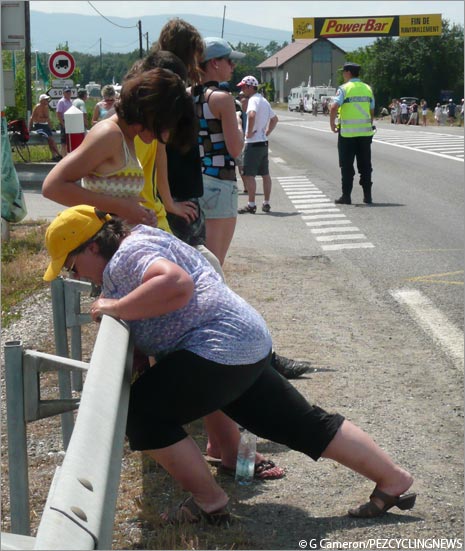 We ducked down a side road for some shade and a drink and gave this mini peloton of kids an encouraging ‘Allez! Allez!’ as they hauled themselves up to the glaring sunlight. They took it in good humor and managed an extra sprint ‘for the Tour’. 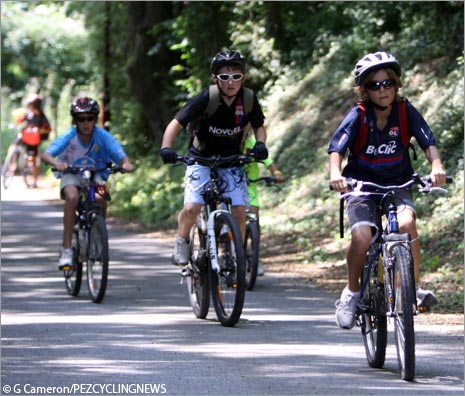 We had a little chat with Patrick Larcher, and his kids Louis and Clementine, with her trй jolleй hat. They live in La Rippe and always come to watch Le Tour when it’s around. Patrick was betting on Contador and Evans, and that looks like a pretty sharp call tonight. 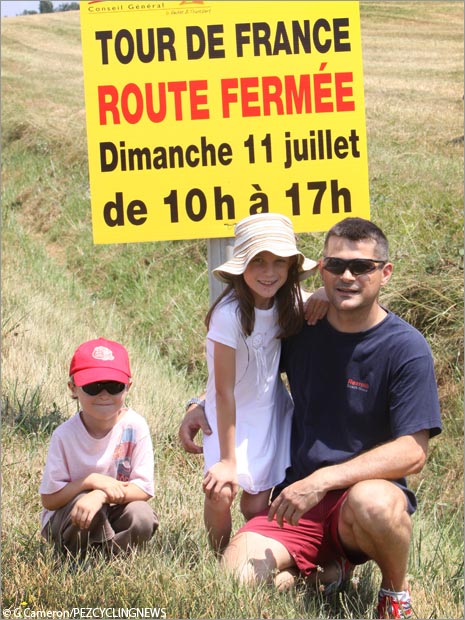 We also had a little chat with the charming Simone, living in the south of France but here on holiday visiting her sister and enjoying the chance to follow Le Tour for a few stages. She’s a fan of Chavanel and Cavendish, but everyone gets her support. “It’s such a hard sport. The weather can be hard, and they are so skinny! It’s only right that we should come and shout ‘Bravo’ to them for what they do.” Simone was collecting freebies for her grandchildren and had scooped up a few goodies before another older couple walked across the road and shared some of their swag with her. 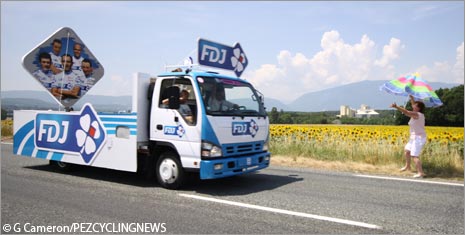 The caravan came and went, with this wee girl getting airborne with excitement. I’m not sure that she was totally delighted when I handed her one of the few things to land in my immediate vicinity. I think it was a sachet of washing powder, but, still … it’s the thought that counts, right? 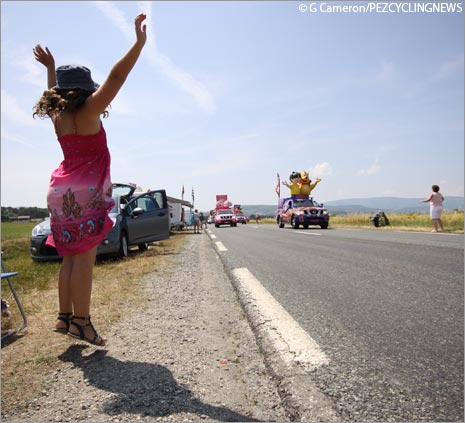 The break came sweating through, pretty much to the schedule in the Tour guide book, leafing through their musettes. They’re gone in a sweat-soaked flash. 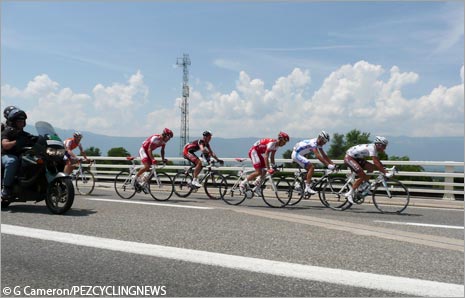 Valerie hung out by the team cars to watch the soigneurs in action and got a bit of a laugh going with the HTC-Columbia crew. This chap wouldn’t smile for the photo because he said his wife still thinks he works at sea. They were teasing the Saxo Bank guys beside them, sympathising about how busy the Danish team would be when Andy Schleck would win the maillot jaune in Morzine. 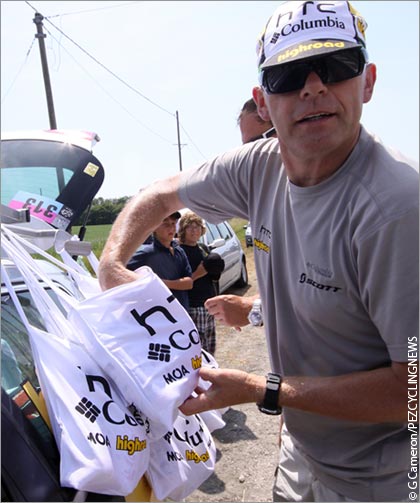 HTC-Columbia man made a successful hand-off to one of his boys right in front of Valerie. 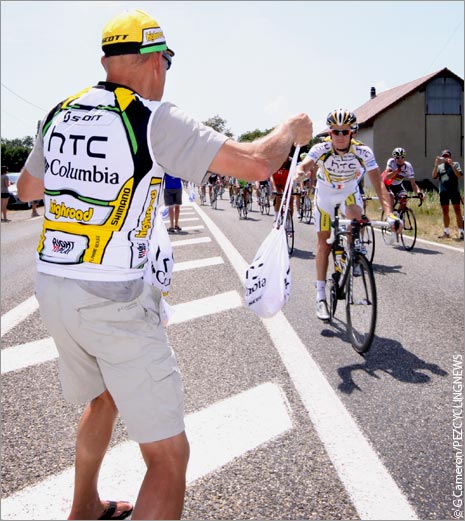 Stationed a little further up the road – souvenir hunting, I’ll admit it – I saw the fruits of his efforts as the HTC-Columbia guys started tearing into their new food and drink. If you look closely, in the left of the picture, you can see a bottle bouncing to the roadside, which was snaffled before it stopped moving by a kid with an Omega Pharma-Lotto cap on. 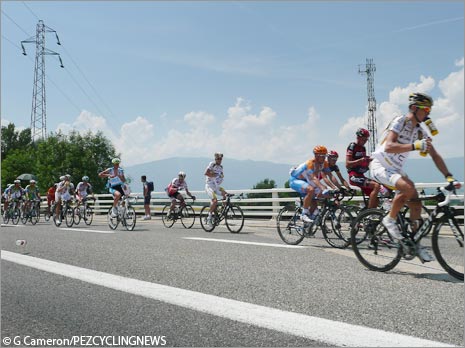 The HTC-Columbia guys packed up and headed for the finish and hotel, but not before they’d made two kids fans for life by handing over some goodies. Nice. 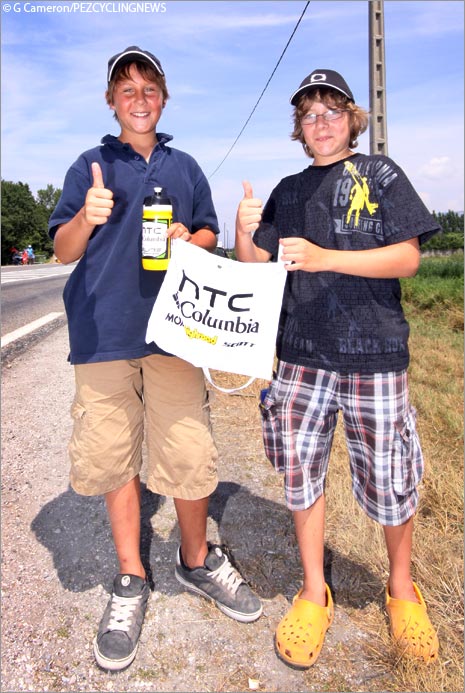 Between us, we achieved an ambition: to catch a bottle at the roadside. You go to four Grand Tours and nothing, then they all come at once! 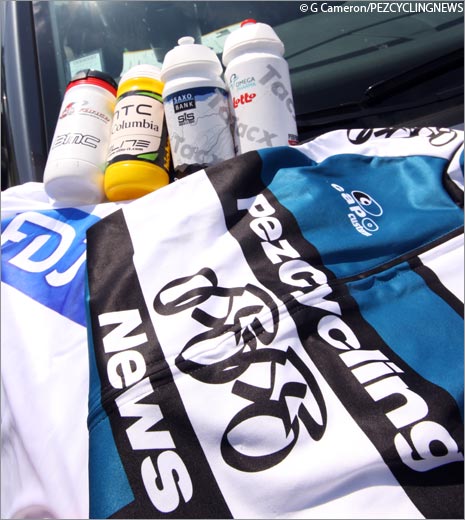 The preamble took hours, the caravan passed in about 25 minutes all-in, the race in just moments.  Just like that, it was over. Time to go home. 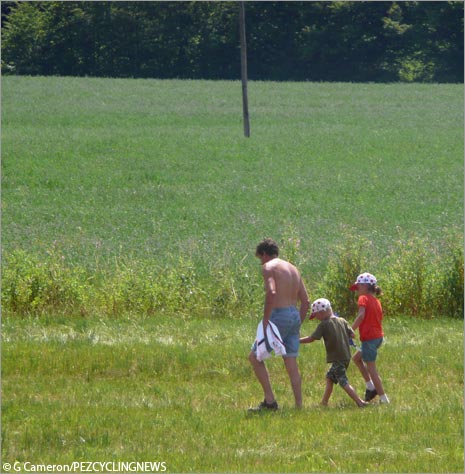