Roadside St. 11: The village that will spawn a thousand and one other awful headlines hosts the feeding station for the eleventh stage of this year’s Tour, and we just knew we had to say that we’d come to Die. It’s a day of dynamic and beautiful scenery, as we romp through the Drфme region.

Our hotel last night turned out to be a bit of a Ryanair destination. Anyone who flies around Europe knows that airline has a reputation for flying to ‘Paris’, for instance, but landing you hours away from the actual arrival city. Our internet booking said our accommodation was in Sisteron; but it was actually in Digne-les-Bain. In fact, you had to turn left out of D-les-B and keep going … it was in another time zone.

Sleep deprived, we needed relaxing vibes on the road back to Sisteron which were supplied by the fields upon fields of lavender lighting up the scorched slopes as we leave the Alpes-de-Haute-Provence behind. 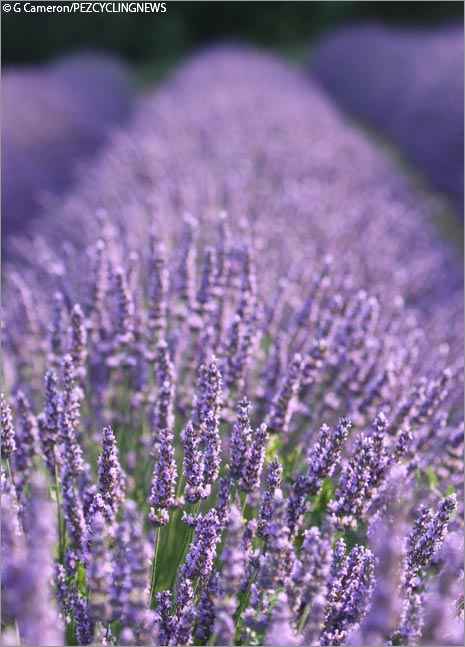 Sisteron is a pretty little town dominated by the stunning citadel, with some elements dating back around 900 years, which protects the town’s heart. Virtually obliterated in WW II, the restoration effort has been immense, and it looks impressive above the multi-colored Tour hubbub. 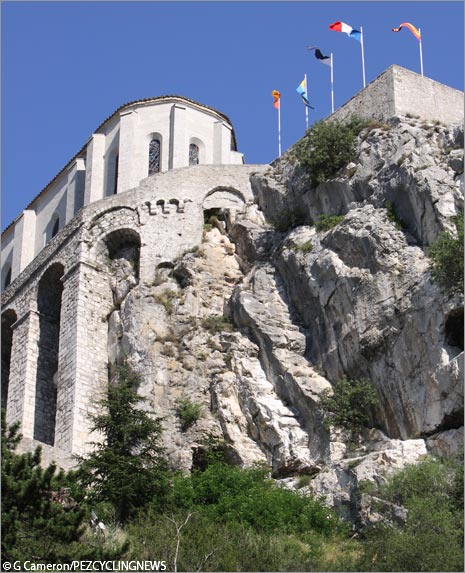 Stepping away from the noise and commercialism, you can look down on the Durance river, and the bridges give you an idea of how strategically important this town was, sitting between the Alps and the southern approach to the Med. 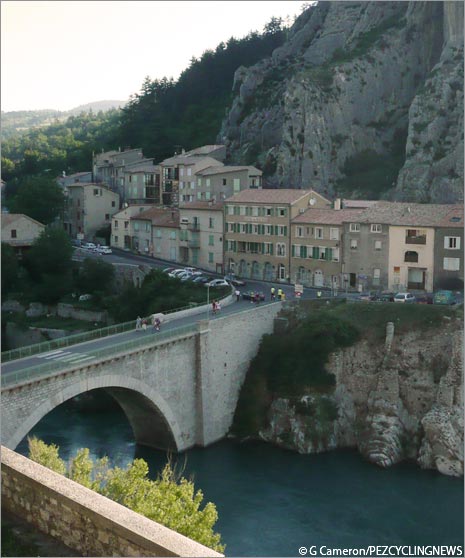 Of all the towns we’ve seen since we arrived last week, Sisteron has made the most effort to welcome the Tour. The place is festooned in yellow, green, white and polka-dot bunting. It flies above every lane and street. 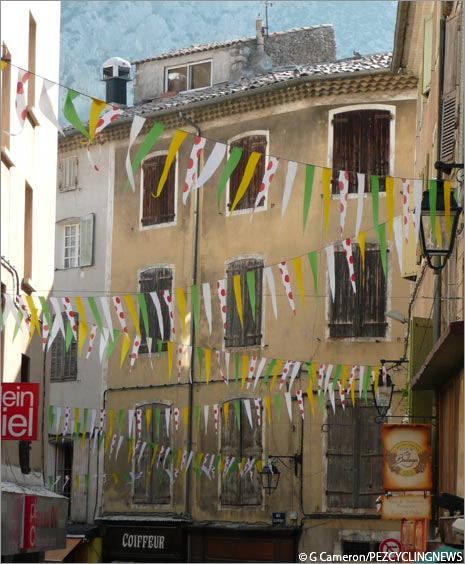 On the roundabout near the start line, a metallic sculpture contrasts with the stone tower and the giant yellow jersey attached. She’s a metallic mosaic, recycled and hammered into shape, and she looks very impressive. 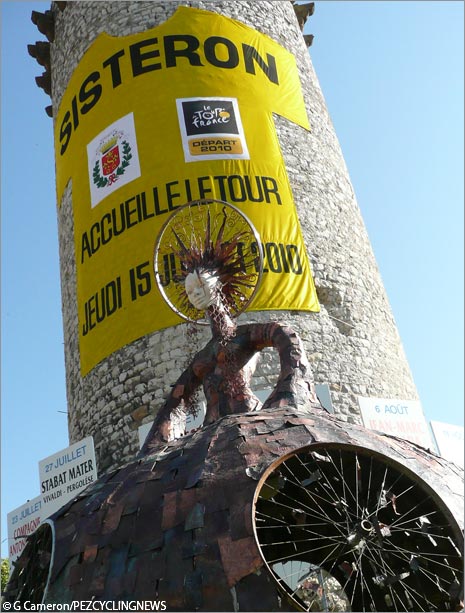 The azure, Upper Provence sky is a great background to the little fabric maillots the locals have strung above their town, and the crowds start to filter up into the town center. 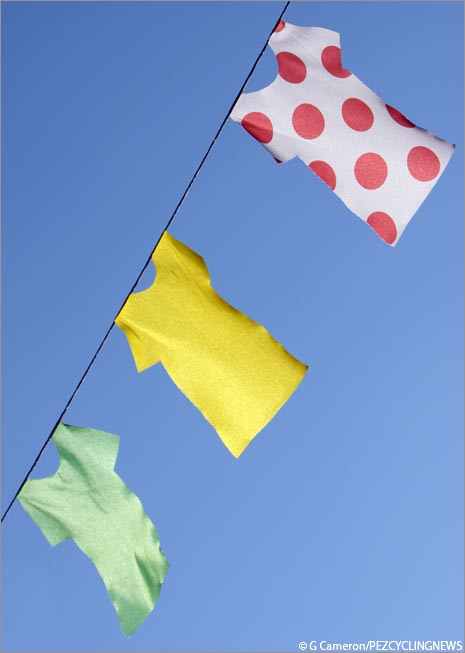 When they get there, there’s a smell … agricultural, something that townies might turn their noses up at. Unless, of course, it comes carved up and roasted. Agneau de Sisteron, unaware of the fate that awaits, stand penned up and panting. 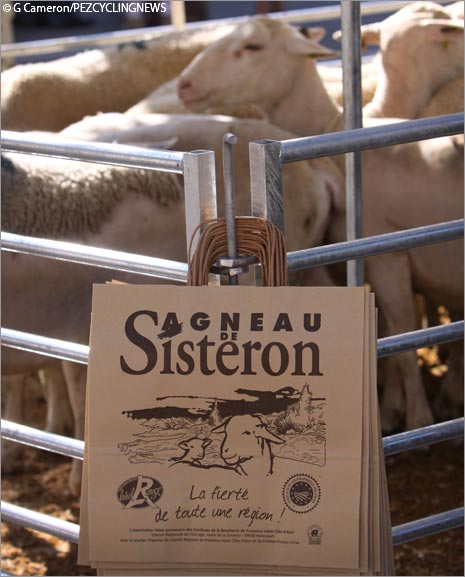 If you prefer a different diet, the boulangerie count is high around here, and offers an ideal place to stock up ahead of your daily ride, especially if the Tour is in town. 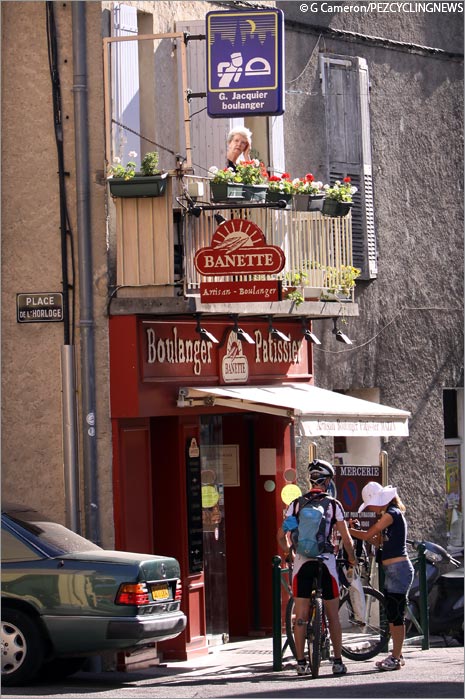 We took to the parcours ahead of the caravan publicitaire, and as we rolled between Beauriиres and Die, there were massive stretches of empty roadsides. Occasionally, we’d round a bend and a couple of kids would be waiting. “They’re going to clean up when the caravan arrives,” says Valerie to me.

We get to Die, and the Dutch have come down from the mountains to start painting the lowland roads. It’s ferociously hot again, with the hills surrounding the town reflecting the heat back onto us. 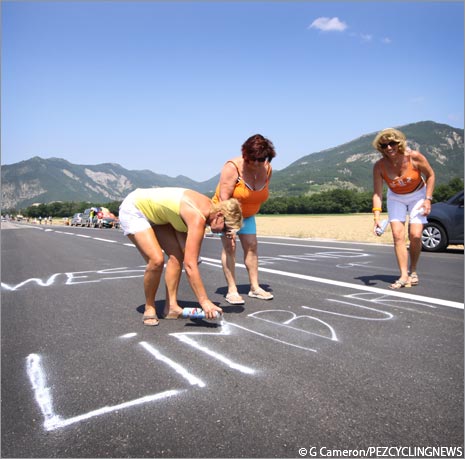 We offer a ‘chapeau’ to the fans who wait it out, but also the gendarmes along the route who frequently have no shade at all. They deserve their holidays in August, when the Tour is done.

The brakes get jammed on as we reach a corner right behind a horse rider towing his other steed along the main road; the police stop ordinary, unaccredited traffic on the race route, but I guess four-legs can get out of the way quicker than four wheels. 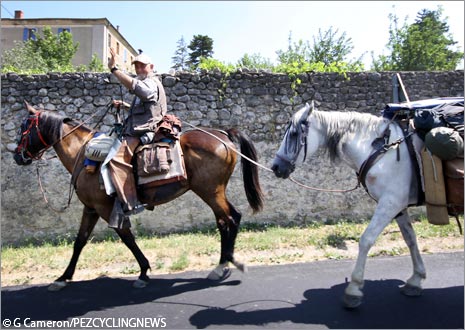 The hours on the road roll by, and the air-con keeps us in decent shape as the mercury creaks higher and higher. Every river looks like an invitation, and surely Pez wouldn’t mind too much if we just dived in for a while? 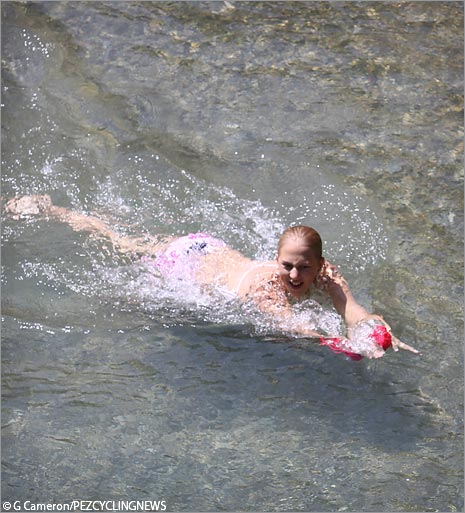 We catch up with the Vittel wagons in Crest and a little boy tries to commit suicide by grabbing a bottle in each hand and racing straight across the road in front of his horrified mother. The old guy on the bike who had weaved through the crowds in Crest ahead of us, grabbed a welcome bottle from the van; like an elderly breakaway rider. 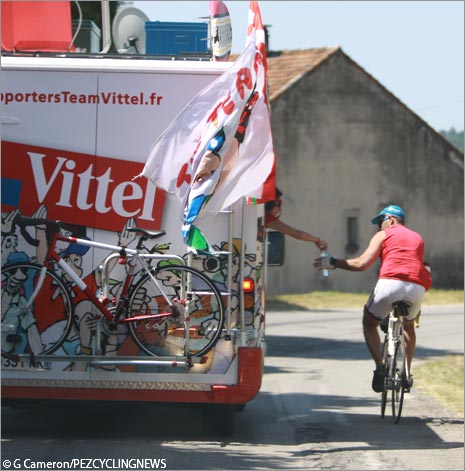 Lance Armstrong’s charity doesn’t go unnoticed here, with huge swathes of tarmac covered in yellow chalk. courtesy of the Nike “Chalk-bot”. The effect as you drive over it is totally hynotic, the messages flashing before your eyes by the score. 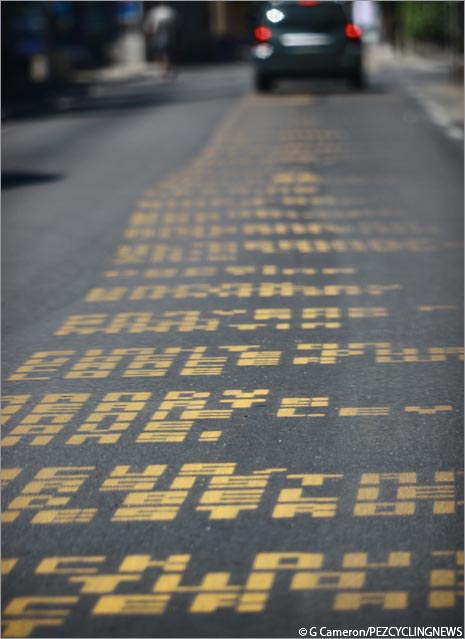 There’s a hold-up as the 20 kilometres to go sign gets a blow-up, which the technical team manage in a matter of moments. It’s another impressive indication of the way the ASO gets things done – quickly. 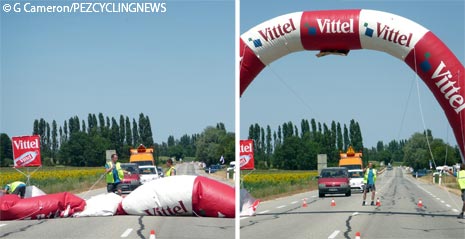 The diversion to the press center is definitely rural, as we batter over a stone scattered track and over a temporary humpback bridge. The riders are still 100kms away so we start work before heading for the finish line …

Here they come … The press tent starts to fill as the kilometres tick down. We can hear Daniel Mangeas’s commentary ripping through the speakers as the bump-and-bore of the sprint unwinds. It’s Cavendish! With Petacchi close enough behind to rip the green jersey of Thor Hushovd’s slumped shoulders. The Norwegian rolls past, head bowed. 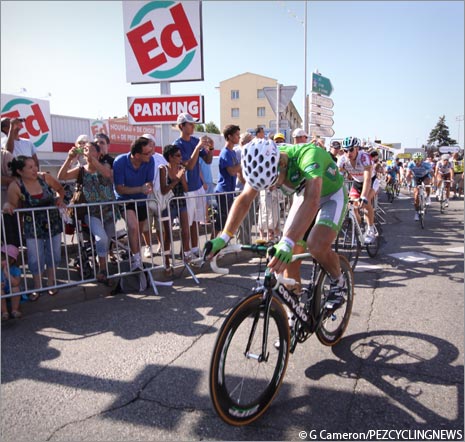 The chaperones have been hovering around the press tent, armed with the names and numbers of the riders they’re supposed to escort. As soon as they see their quarry, they’re off. 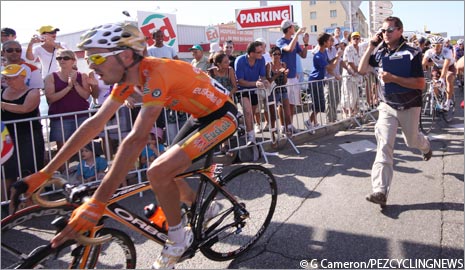 Lance Armstrong cuts a pretty mellow figure, just waiting his turn to get through to the buses. So low key is his presence at the finish, that some fans weren’t even aware he was passing by. 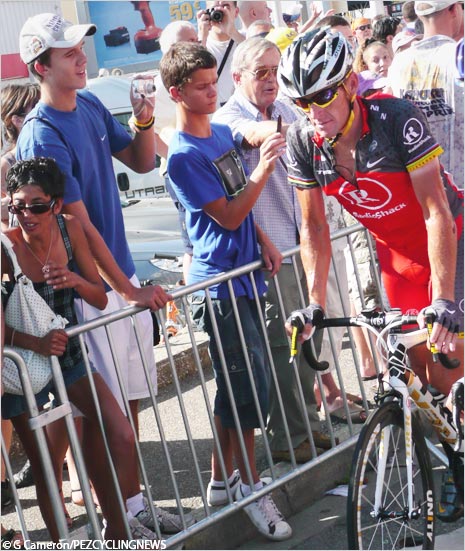 For Kevin Seeldrayers (173rd) and Christophe Kern (176th), the big screen replay is where to find out exactly what happened at the front … they weren’t even in the finishing straight when Cav crossed the line. 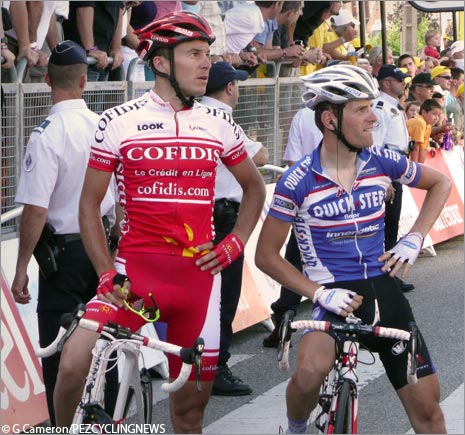 In fact, they were only just trundling off when the Manx Missile emerged onto the podium to shake hands with French rugby giant Sebastian Chabal and women’s racing queen Jeannie Longo-Ciprelli. Mark gets a big hand from Bernard Hiinault, too, who recognises a kindred firebrand spirit when he sees one barreling down the finishing straight. 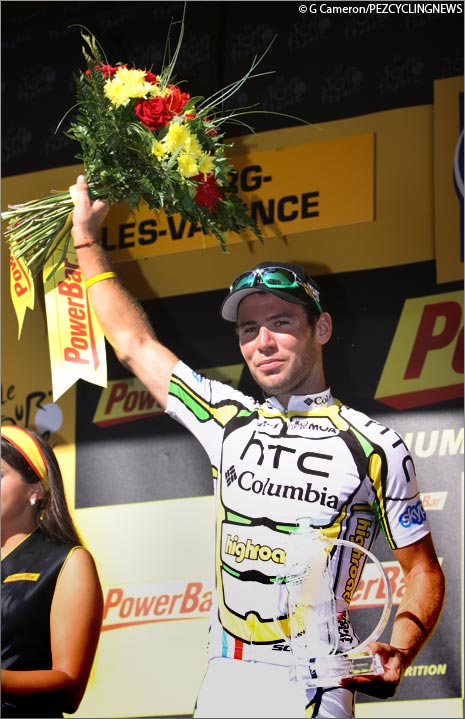 Stйphane Auge knows his way around a breakaway and the Cofidis veteran looked pretty happy with his day’s work, snaffling the combativity prize as well as valuable air time for his sponsor. 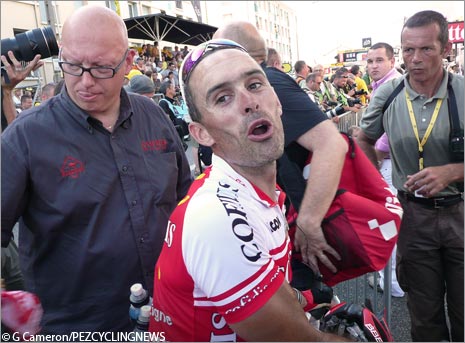 The Tour’s outcome now seems to depend on how well these legs hold up over the Pyrenees. Any weakness and Contador will pounce, but, for now, Andy Schleck’s in good shape. 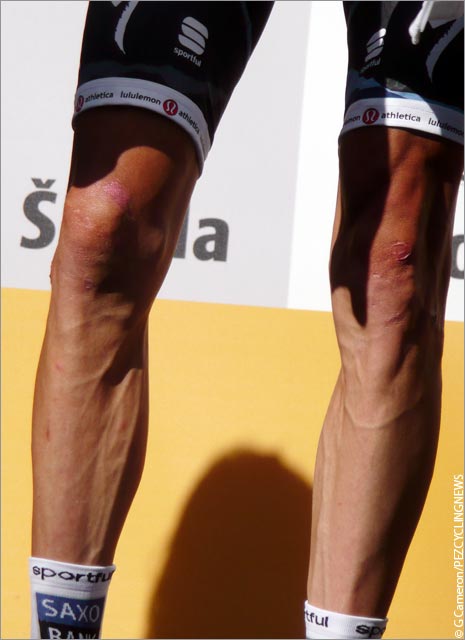 We will be, too, for our last day on the Tour tomorrow.

Tour Coach: Booting Renshaw Too Much