PEZ Preview: This will be an easy day for viewers – because all the action will happen in the final 20km – guaranteed. Stage 17 from Gap to Pinerolo hosts the same final kms as the ’09 Giro’s Stage 10 – which I rode myself. I’m making the call on this one…

Yes, it’s the opening day into the Alps, and we’ll have seen a settling of the GC Big Boys a few days earlier in the Pyrenees, but this day begins the final 4 days to decide the race.

The final 72km of this stage are identical to those used at the 2009 Giro’s stage 10 – and I rode the final 20km to check out the Pramartino climb – which I predict will be an action packed 16km: 10 max-effort kms up, and 6 white-knuckled kms down. 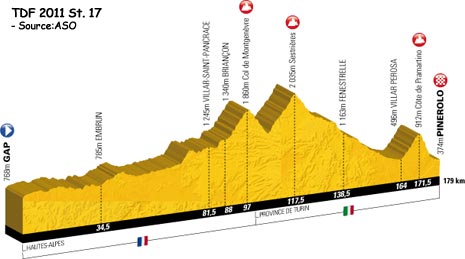 The whole stage is 179km long – that’s 117km to reach the top of Col de Sestriere, by way of a long slog up to Brianзon at 1340m (the highest city in Europe), and then up higher to the Col de Montgenиvre at 1869m, but all that’ll do is soften the legs as the gc boys watch each other and wait. A break of non-threats will go early, possibly containing a lieutenant or two who may serve useful later on, when the race hits its decisive final 17km. And the Italians will be well-represented at the front, seeing as they’ll want some national glory of a win on home soil.

From the Sestriere summit, it’s a long 47km downhill to the right turn at Villar Perosa, the descent is fast but not technical, and simply too far to think about staying away on. But that right turn signals the climb of Pramartino – and what will certainly be a mass lighting of matches from the guys who matter. 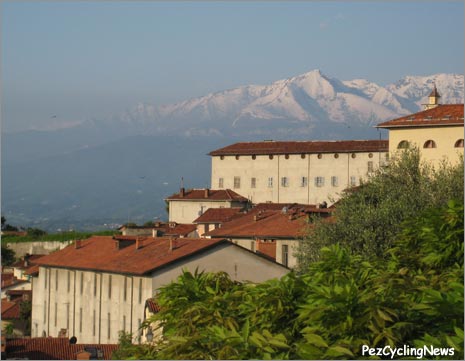 Here’s the view from Pinerolo west to the Alps.

It’s 10km to the top – on small single lane roads that twist a turn through a wooded forest. If it’s sunny – it’ll be hot and humid inside because the heavy woods will stifle any breeze. If it’s wet – the roads will be slippery from leaves and whatever other junk hasn’t been swept up by the local cleaning crew.

There’s nary a section of road the entire climb that’s straight for more than 50 meters – anyone who escapes has the advantage of getting out of sight quickly.

The slope runs around 6-7%, with a max of 12%, and when the pace hots up will see the bunch split apart like the transmission in an old Citroen.

That’s the first part of the story – the second is the descent – 3.6 km of twisty turny, very technical 10% grade nastiness – off-camber turns, no guard rails, unprotected concrete abutments – in a word: “yikes”. It’s perfect to get away if you’ve got the scrotes, downright dangerous if you don’t. Passing will be tricky and the gaps at the top could easily be larger by the bottom.

But wait- that’s not all!
There’s one more small climb about 3km from the line – it’s about 1400m long and gains a 100-150m – DiLuca attacked his lead group on these slopes and soloed in for a 12second gain. This last descent and the streets of Pinerolo are very narrow and technical – standard stuff for the Giro – but a bit edgy for the more conservative ASO – so we’ll have to see if they use this last little stinger.

If they omit that last little climb, it’s a 3500m run downhill to the line from the base of Pramartino, likely enough for gaps to stick. So don’t expect a huge change on gc, but watch for exciting racing and incremental gains as the gloves comes off.

Here’s my full report from that ride…

Giro di PEZ: Stage 10’s Final Climb!
Pez Roadside: It’s rest day 1 for the racers of this Giro, but not for me… and as tired as I might feel – chasing the Giro just never gets tired. I’m in Pinerolo, and took a ride on the final climb of tomorrow’s epic stage from Cuneo… the 925m Pra Martino – and it could be decisive – if they use it.

After almost losing the plot during yesterday’s ‘stage’, I remembered why I came to Italy and bounced back with a super-sized negroni and fine meal in a local trattoria. That put me in good stead for slipping the rented Kia into gear by 9 AM, and clearing the Milanese traffic horror by 930 this morning on my way to the stage 10 finish town of Pinerolo. 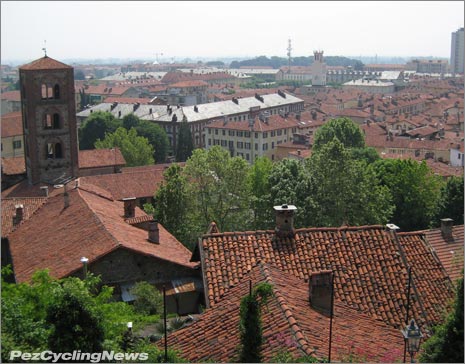 Pinerolo lies between Torino and Sestriere, and by 1130 I was checking into my room- and they’ve even got free internet – which is ever the welcome surprise after paying 18-25 euros a day.

The plan was a good one – even if it was plan B. My original hopes to ride the Colle del’Agnello & Izoard were dashed by both passes still being snowed under. And even though the official Giro route had been changed a few weeks back to miss these famous climbs, the new route of 262km offers up some tough challenges – but I saw today they are not without some danger. 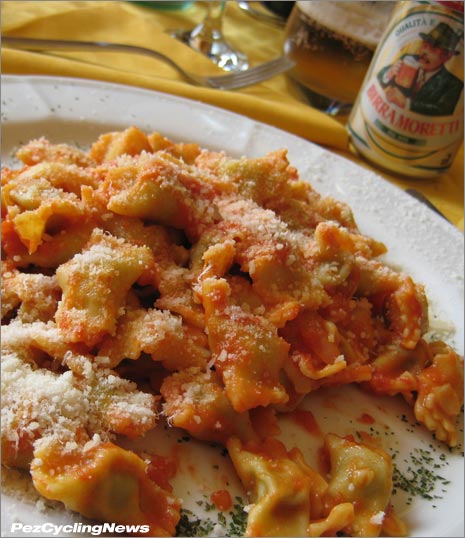 Ride…. Nap… ride… nap… It’s such a fine line after a pre-ride lunch of delicious agnulloti. 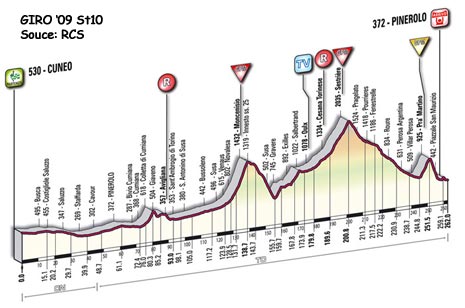 But see that little blip at the end of the stage profile? That little biter comes after 250km of racing and is going to cause some pain – so be prepared for some racing. Gentlemen, and ladies… may I present the climb to Pra Martino. 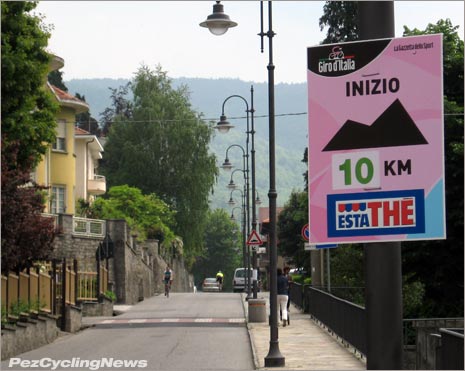 After carefully studying the guide book, and my own maps, and getting the hotel desk guy to make photocopies for my jersey pockets… I proceed to get lost not 6 km into the ride. Classic. Good thing I bumped into local-man Umberto – out for his afternoon pedal, who was more than happy to change his route and personally deliver me to the start of the climb – he even took me up the first switchback. 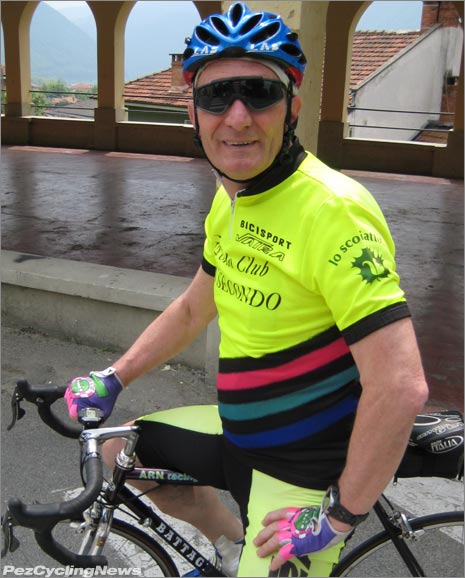 Big ‘grazie’ to my man Umberto for the directional hook-up. 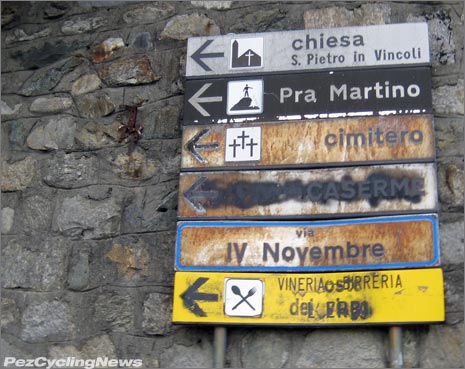 This is a very cool little climb- it starts in the town of Villar Perosa and goes up for 10km, hits pitches of 12%, and winds it’s way through a wooded forest. This sign at the bottom pretty much tells the story… the climb is rickety, unpaved in a couple spots, and set in a forest that I’m sure was home to a large population of ogres, gnomes, and witches. The descent is even scarier – in fact down right dangerous – but we’ll get there soon enough… 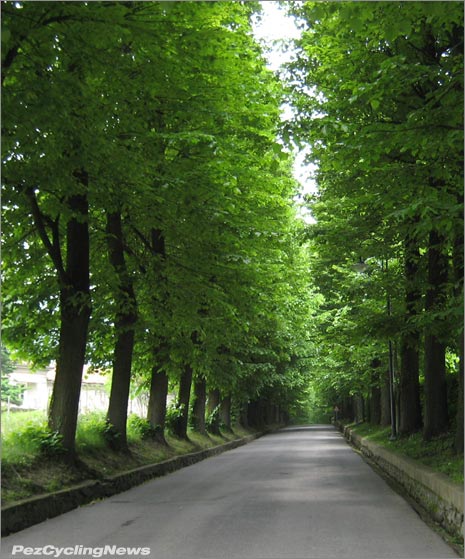 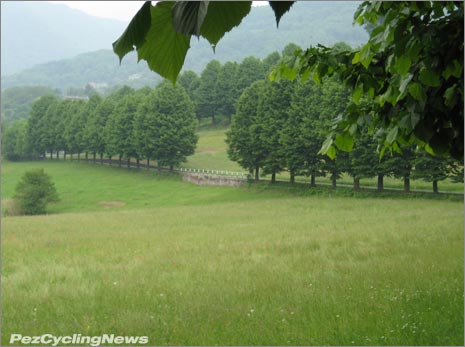 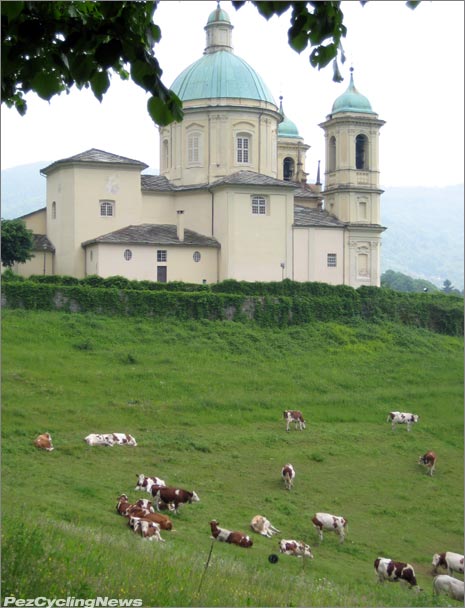 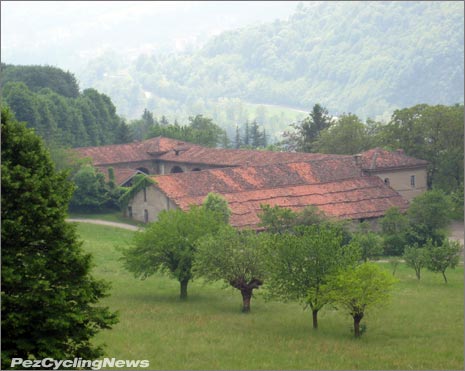 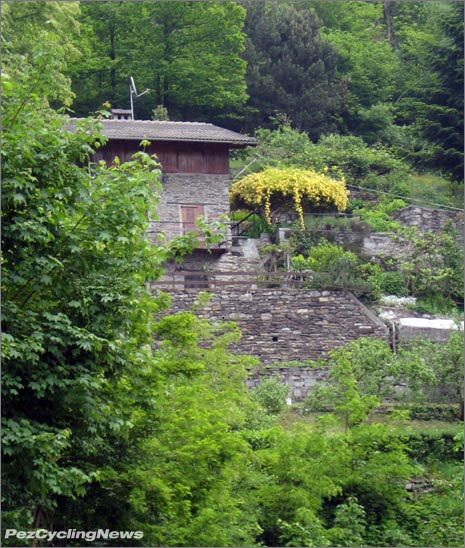 There were few signs of human interest to inhabit the climb, the flora seemed fine with that. 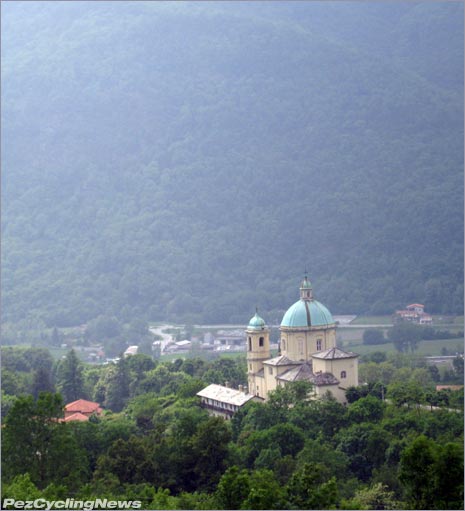 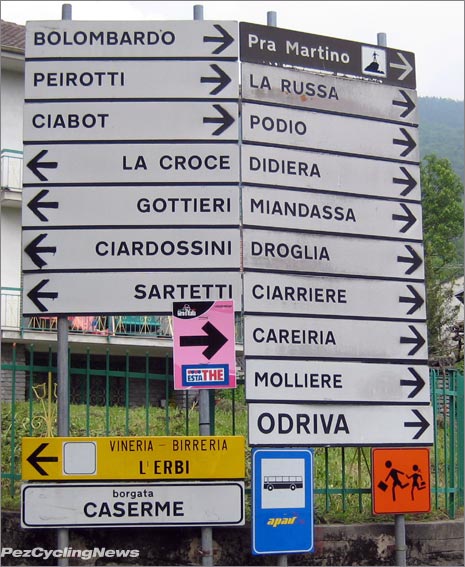 There are not shortage of places to go in Italy… you just gotta choose the right one. 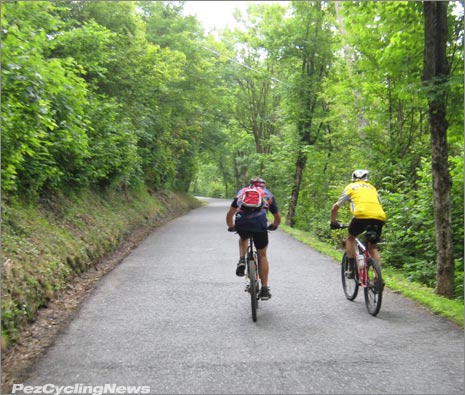 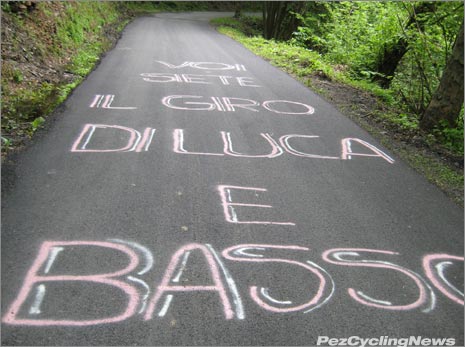 … A LOT of Basso fans here… and at least one for Di Luca. 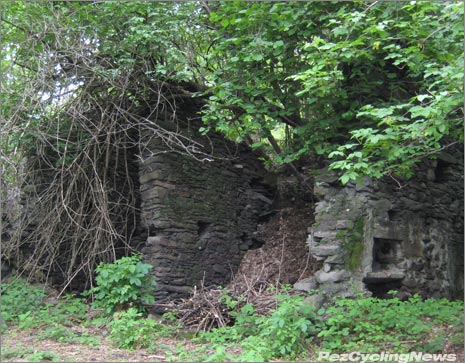 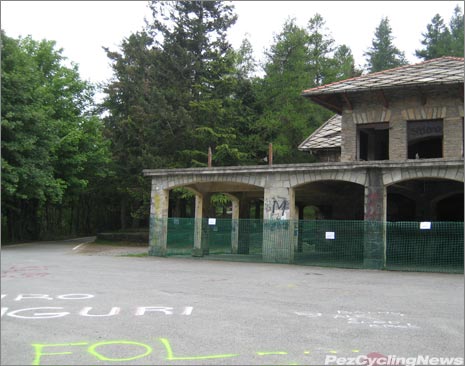 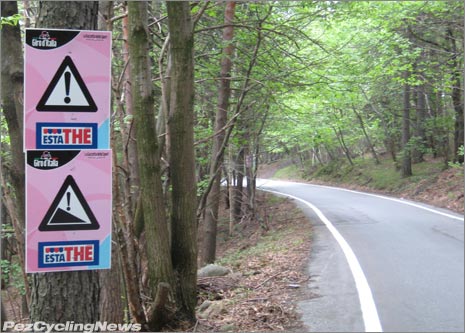 The recent rider concerns about course safety seem to be heard by the RCS. And although the roadsides were marked with fresh white paint, this switchback (below) was the only one that was clearcut so riders could better see the turn. 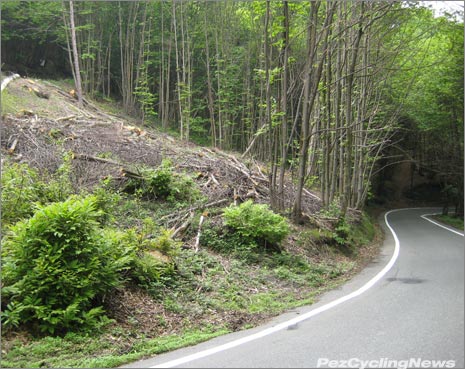 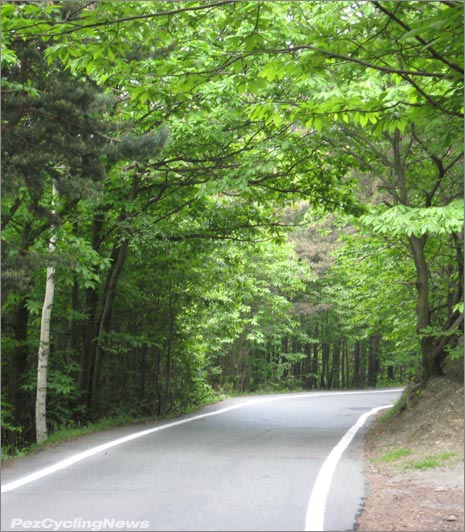 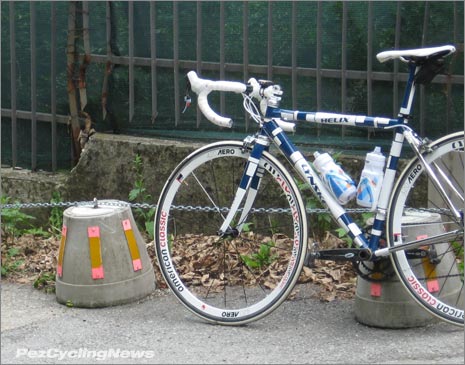 The lower slopes in the town are littered with manhole covers, grates and assorted bumps. The upper slopes lack guardrails of any kind, and one turn was strung with these concrete blocks as a ‘barrier’.

Between us… I won’t be too surprised if this climb gets the axe in a last minute ‘adjustment’ before tomorrow’s start. Going up would make some great racing, which could easily be negated by the treacherous descent at best, and at worst cause some serious crashes. 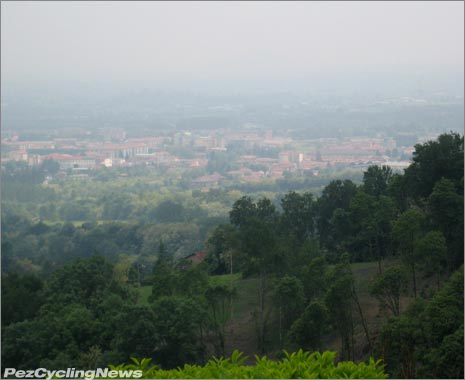 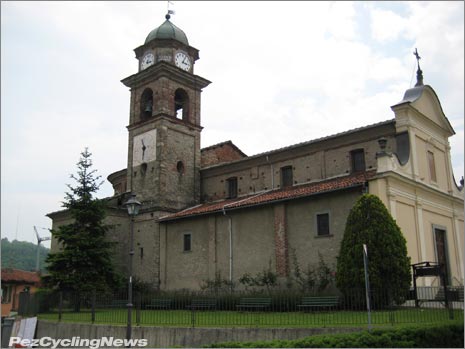 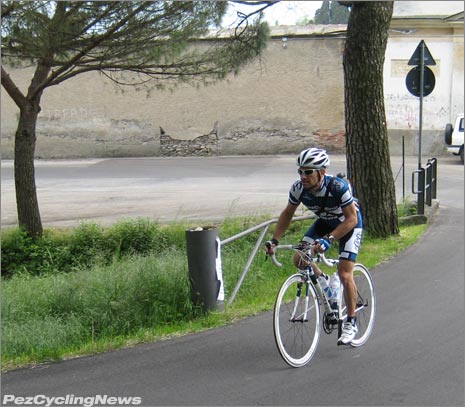 That’s me givin’ er the ol’ college try– at least for the photo opp – on the stage’s very final climb. (Many thanks to the local who kindly agreed to take this pic…) 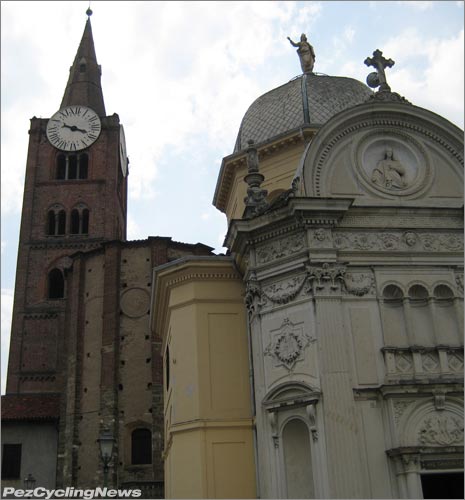 Once off the descent, it’s a 1600m flat run to Pinerolo, and a hard left hander that delivers the corsa to one final uphill section – a few hundred meter climb to the Basilica di san Maurizio. It’s just enough to charge the legs with one more dose of lactic acid, then another fast drop to the town center and it’s narrow, cobbled streets. 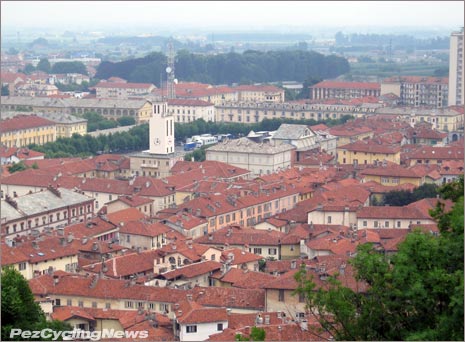 We’ll see if they actually use this climb tomorrow, but regardless it’ll be a hard day of pedaling. Now it’s almost negroni time, and then I’ll be up early to make the start village by 9AM tomorrow…