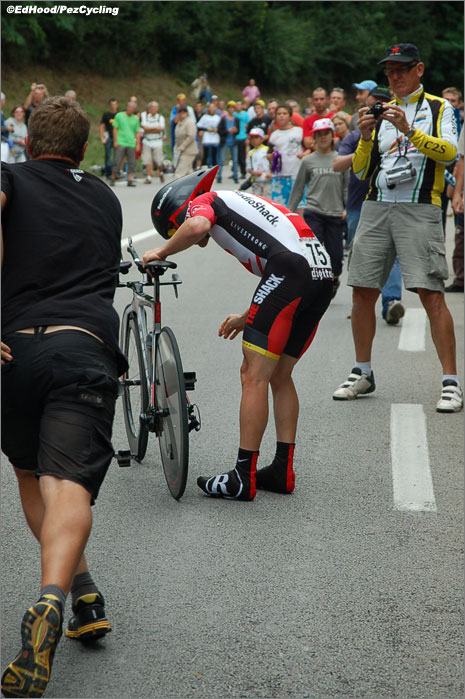 But the mechanic stays cool, lifts the Trek, hooks the chain back on, gets Levi saddled up and pushes the man from Butte back into the fray.

If I was Johan Bruyneel, I’d throw my Tour road book in the bin and pour myself a large brandy, tomorrow night.

But our first job today was to get off l’Alpe d’Huez – 90 minutes to do less than 10 miles and then straight into more huge jams.

As Dave battled the traffic, I caught up with the news.

And the argument is finally over – on this day when battles through two mountain ranges haven’t decided who will wear the maillot jaune into Paris, it’s all down to 42.5 kilometres ‘contre la montre’ – l’Equipe has enlightened us.

Who’s ‘King of the Chrono?’ 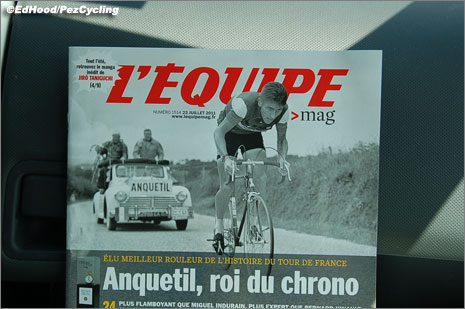 But he was a joy to behold, smooth, focused and beautifully aero – he called it the ‘egg’ position.

He won all three Grand Tours, taking time trial wins in all of them as well as nine Grand Prix des Nations – a big deal race over 100 kilometres back in the day and the unofficial world time trial championship.

Now that we’ve sorted that out, what about today?

We have 167 coureurs, going off at two minute intervals until the last 20 riders when the gap becomes three minutes to minimise the chance of pacing.

My ‘chrono result predictor,’ Big Pete the bookie has Evans at 4/7 – that’s seven on to win four.

But L’Equipe also reminds us that in the last ‘level playing field’ shoot out between Andy and Cadel in the 2009 Tour – Evans was injured in 2010 – over 40.5 kilometres around Lac Annecy, the Australian beat the Luxemburger by only 31 seconds.

But those bookies don’t often get it wrong – it’s their living.

We could sit by the roadside, take time checks and pictures; but the only real way to understand the parcours is to follow a rider.

Originally we’d hoped to follow David Millar, but we were still in traffic when he finished his ride – never mind started.

We tried to get Tony Martin, but left it too late. 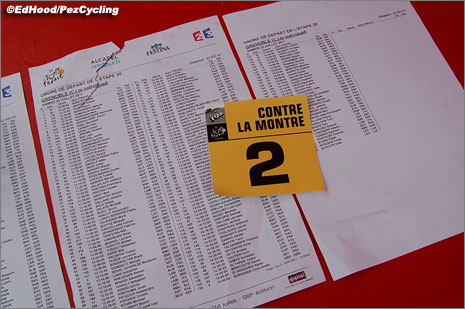 ‘Yes, just one other car follows him’ – get the vital sticker, join the queue, clear the back seat to take a ‘guest,’ and we’re set. 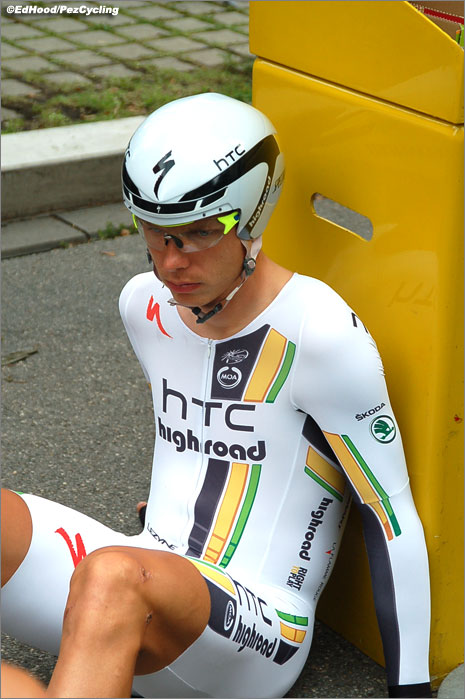 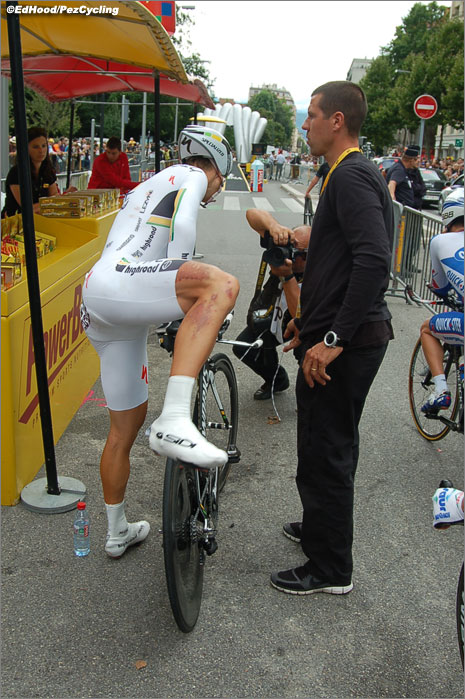 Tony Martin is leaving nothing to chance, he test rides the spare bike too and then settles down on the tarmac for a few seconds – he’s well ‘in the zone’ as the final result would confirm. 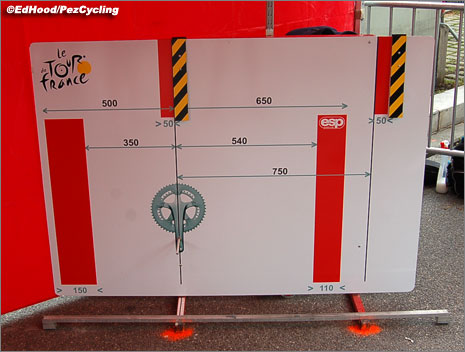 Levi’s mechanics take the Trek to the commisars for checking, the technical guys place it against the jig, it’s good. 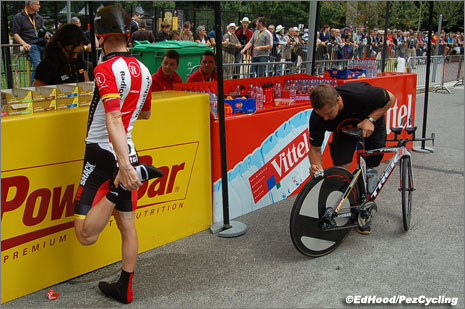 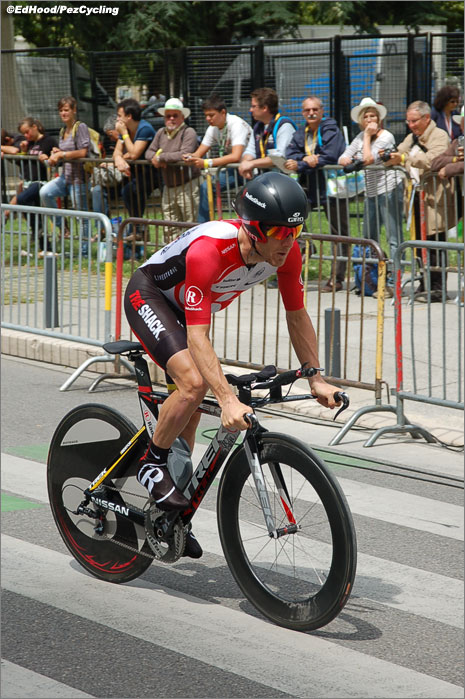 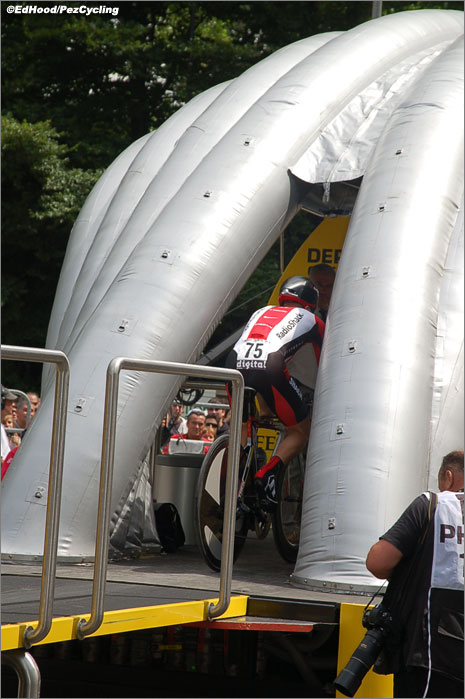 Levi stretches, the mechanic fusses over the bike, his two minute man, Gesink has gone and it’s time to bump the ramp to the start house. 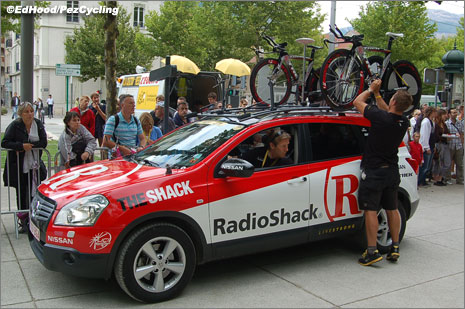 We tuck in behind the Shack wagon and we’re off. 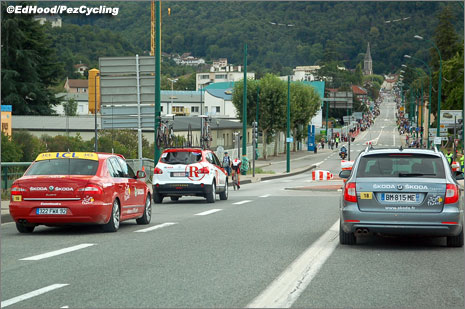 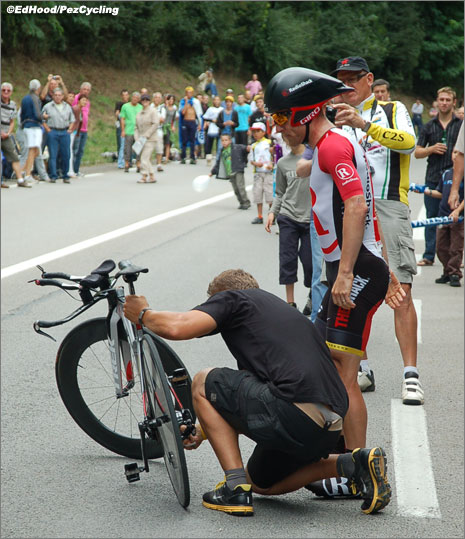 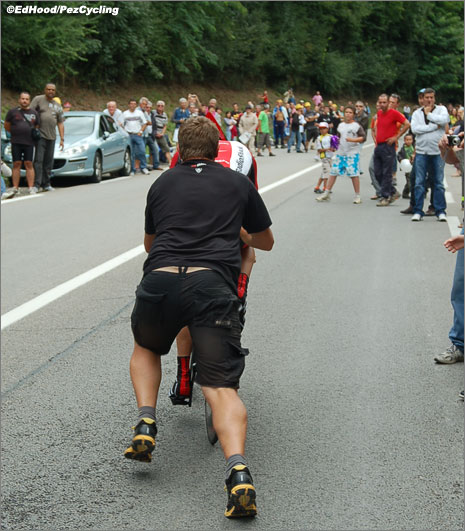 The ‘burbs, and it climbs, up, up, out of the saddle, the speed is down to 30, he sits down, changes gear – jeez ! his chain is off, we can hear the rattle back here.

Our French guest smiles as I jump back into the car after the excitement; ‘scoop!’ he says as he points at my camera. 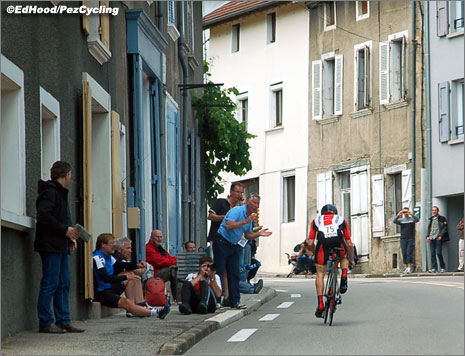 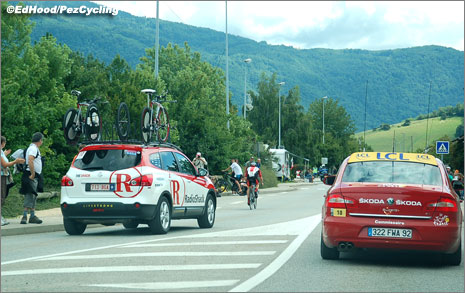 Over the top, it plateaus, he should be flying but the flags tell us it’s a headwind and it’s 40/45 and he looks heavy legged. 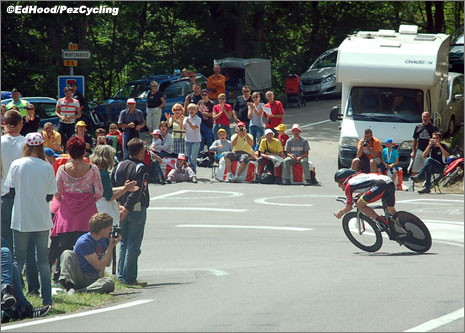 Here’s the descent, no messing, 80 kph, it levels and we try to get up to take pictures but there’s a ‘guest’ car in the way; ‘let’s get him out the way, Dave’ says me.

But our back seat passenger has already sussed that the passenger in the guest car is world judo champion, Tedy Riven – ‘we’re fine where we are, Dave!’

Eventually they get bored and leave Levi to us, the team car and the commisar. 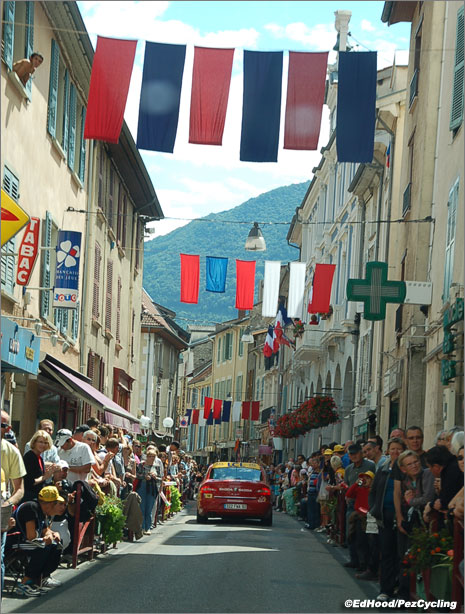 It really drops now, 90 kph but straight into a small village, narrow roads, fans everywhere, 90 degree left – it’s like being in a video game. 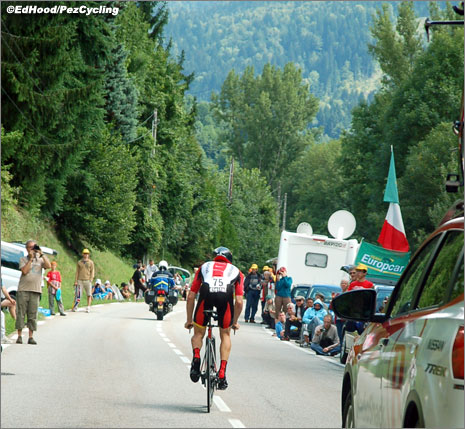 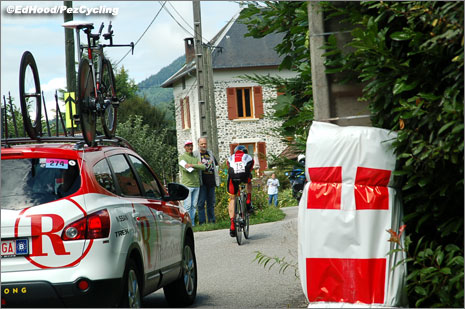 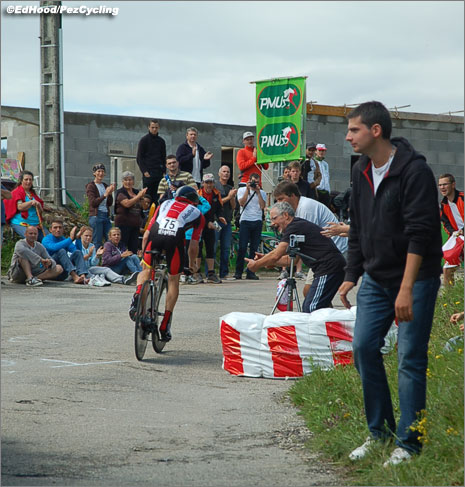 His legs look ‘blocked,’ laboured – it kicks up again on tiny, rough roads and we’re down to 20 kph.

Al emails to say that Geraint Thomas is chewing up the tar behind us, we look back and can see the lights of motor bike escort. 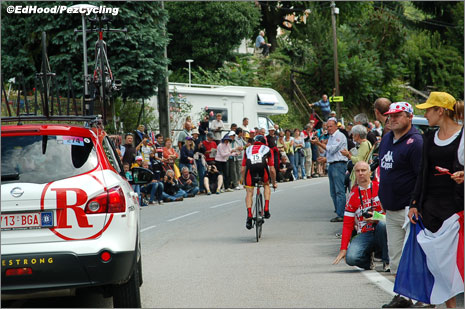 Levi is laboured, he’s not enjoying this, he’s out of the saddle but those pedals are heavy under his feet. 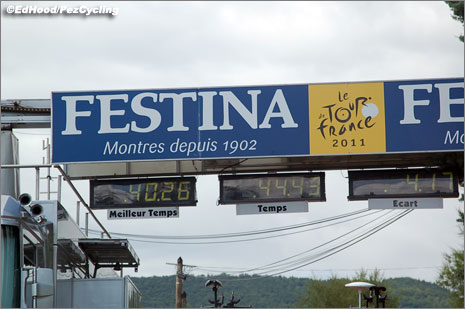 The commisar tells us to watch out if Thomas comes by and then flies away ahead out of sight; the second check tells us why, Levi is 4:17 off the pace. 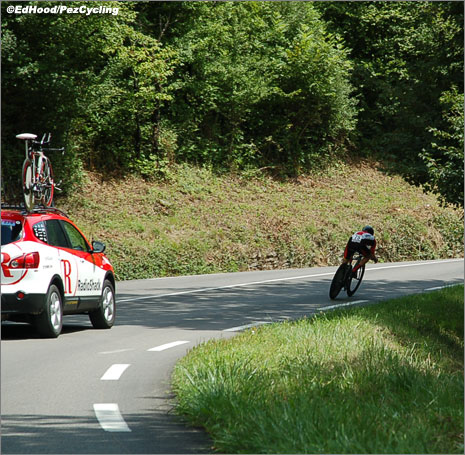 A technical descent – or should that be ‘fun fare ride?’ 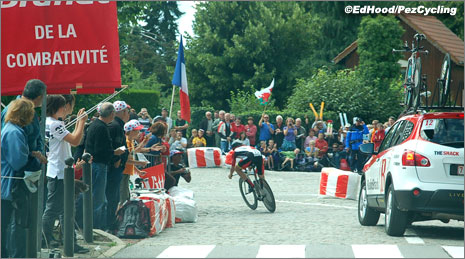 Levi might not be on his best climbing form but he’s on the money on the descents as we fly back towards Grenoble.

He takes the speed bumps like a BMX-er and puts time into us on the ‘S’ bends with the speedo reading 70.

Of the descent it’s fast and there’s no way we’ll see Geraint today as Levi’s pedal stroke becomes lighter along the big boulevards into the finish. 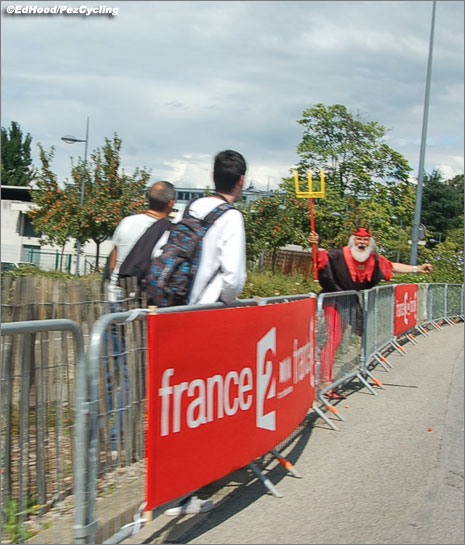 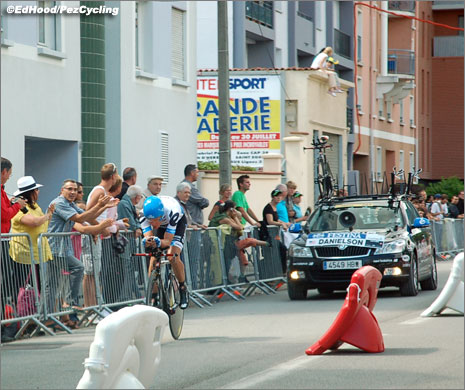 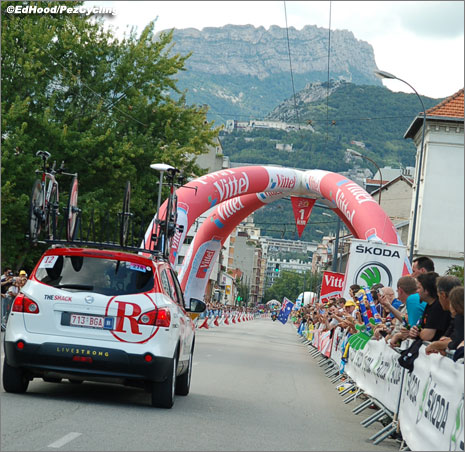 Flamme rouge, we cross Tom Danielson as he roars out for his afternoon in the hills. 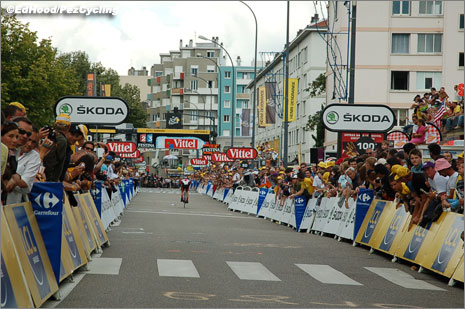 Deviation, we go left, Levi flies to the line.