Race Report: A cracker of a day in the Tour de France with action all day with the sort of finalй you dream of. For many of the riders the day was a nightmare, especially Cadel Evans who tried his hand, but came up short and lost his 2nd place overall. A dream for Froome, Nibali, Pinot, Wiggins and definitely stage winner Pierre Rolland. It was all go from start to finish, a nail biting day on the Tour.

Stage 11 is quite short at 148 kilometres, but has four good climbs without much flat areas for rest, a day for attacks. The start is from Albertville and takes in the Col de la Madeleine (HC) which peaks at 2,000 meters after 40 kilometres from the start, its 25.3 K long with an average rise of 6.2%. The second climb, the Col de la Croix de Fer (HC) is the highest point of the 2012 Tour and carries the Souvenir Henri Desgrange prize. It’s 22.4 kilometres long up to 2,067 meters in height with an average ramp of 6.9%, the summit is after 93 kilometres. Next is the 2nd Cat Col du Mollard after 113 kilometres, 5.7 kilometres long at 6.8%. The finish is on the summit of the La Toussuire (1st Cat), it starts 19 kilometres from the line and climbs to 1,705 metres at a steady 6.1%.

Missing from the start line was RadioShack-Nissan’s Fabian Cancellara, the winner of the Prologue and 7 days yellow jersey is to return home to Bern, Switzerland to assist his wife in the last days of her pregnancy.

Col de la Madeleine
As the break closed on the top of the Madeleine, Peter Velits (Omega Pharma – Quick-Step) and Fredrik Kessiakoff (Astana) fought out the maximum mountains points, Velits was first, but Kessiakoff had enough points to be (virtual) KOM on the road. The gap between the front group and the chasers was 3 minutes.

Col de la Croix de Fer
Down into the valley; Velits and Kessiakoff had 35 seconds on the leaders, who in turn were 2 minutes ahead of Liquigas-Cannondale pair of Peter Sagan (Green jersey) and Daniel Oss and 3 minutes on the peloton.

The leaders came through the intermediate sprint in the town of Saint Etienne de Cuines at the base of the Col de la Croix Fer with 78 kilometres to go, still with a lead of 3 minutes, but with Velits and Kessiakoff back with the leaders and Sagan and Oss back in the peloton.

The lead group had split just before the sprint, so Rolland, Kessiakoff, Velits, Trofimov, Kiryienka, Valverde, and Scarponi were a head of the others and looking press home their advantage on the Croix de Fer, but they came back together again in the foot hills, minus Koren, Izagirre and Bouet.

Part of the Col de la Croix de Fer is the climb of the Col du Glandon at 1,024 metres on the way up to the summit of the Croix de Fer, but the Glandon is not classified. Scarponi, Manzano, Moinard and Vinokourov were dropped first from the escape under the pressure of Europcar’s Christophe Kern for his man; Pierre Rolland, the lead was just over 3 minutes and Sky had everything under control.

Levi Leipheimer lost his hold onto the break as Kern sat on the front all the way up; Valverde and Basso were next for the cut, leaving around 12 riders out front with an extended lead of 4:08 at 67 kilometres to go.

BMC were up to something as the white jersey of Van Garderen went up the road and then…bang! Cadel Evans shot out of the peloton, first catching the fading Leipheimer and then shooting off again to get up to Van Garderen for a BMC tandem. Sky had four riders on the front with Wiggins sitting in third place. Van Garderen was the engine, sitting in the saddle as Evans is in and out of his.

Evans and Van Garderen catch Moinard who dropped back from the leaders to help with the BMC work as much as he could until he could do no more. The Sky chasers were blowing the race apart; RadioShack lost Zubeldia, Schleck and Kloden from the peloton.

Kern was still on the front of the race as the Sky chasers pulled Evans, Van Garderen and Basso back with 60 to the finish. The yellow jersey group was down to 13 riders, they were 2:56 behind the leaders with 4 kilometres still to the top of the Croix de Fer. Kern eventually cracked leaving Chris Horner to tow the escape and becoming RadioShack’s best rider on overall.

At the top Rolland attacked, but Kisierlovski just pushed in front of him for the full points and the Ђ5000 prize for the Souvenir Henri Desgrange, the KOM jersey should also be his at the end of the day.

The drop down the other side was very twisty and quite technical in places with big drop off’s to one side, but apart from Mick Rogers taking a slight detour at one point everyone got down safely.

With 40 hard kilometres to go; the Horner group had 2:10 on the Wiggins chasers, they hit the Mollard and Velits attacked and sees of Keissiakoff, Horner (mechanical) and Martin. Kiserlovski and Rolland press on with Sorensen and Velits just behind and the yellow jersey at 2:30, Wiggins still had three Sky riders with him (Rogers, Porte & Froome).

Rolland (Europcar) and Kiserlovski (Astana) had Kiryienka (Movistar) chasing back up to them with Sorensen trying to do the same, but without the same speed, the others of the leaders were now nowhere to be seen and the gap was going out to over 3 minutes as they approached the top of the Mollard; Rolland, Kiserlovski, Kiryienka, Sorensen was the order on the line.

Thibaut Pineau (FDJ-BigMat) attacked the peloton for the top of the climb to try to put time into Van Garderen for the white jersey. Sorensen was still struggling to catch up as Rolland fell on one of the tight corners; he was shaken, but not injured.

Rolland and Sorensen got up to Kiserlovski and Kiryienka with the last climb of La Toussuire and its 19 kilometres with a lead of 3:43 over the Sky led chase, although there was no need to catch them as none were a GC danger.

La Toussuire
Kiserlovski put in the first effort, Rolland followed, Kiryienka and Sorensen couldn’t at first, but fought their way back in 3 kilometres and Kiryienka attacked just to show he’s not finished, Sorensen on the other hand did look finished. The Peloton had grown with many of the dropped riders regaining the yellow jersey group, although Valverde was in trouble.

Wiggins was now down to Porte and Froome to tow him to the finish, Evans, Van Den Broeck and Nibali were keeping close to the action. Frank Schleck, Horner, Zubeldia and Klцden had got back to the group with Cobo, Pinot, Roche, Brajkovic and some others…but no sign of Denis Menchov.

The climb was too long for a long effort from the four up front, Sky would prefer to keep things together, but Janez Brajkovic (Astana) had a different idea and attacked with 12 K to go. Van Den Broeck reacted taking Pinot with him, this got Nibali going and he was next to leave the Wiggins group.

Rolland put the pressure on the others and was on his own under the 10 kilometre banner, Porte couldn’t help the chase and the big gun of Froome pulled the brave Italian back and split the group. Nibali waited and attacked again, Froome led again from Wiggins, Evans, Van Garderen and Schleck, the others were lower down the mountain.

Nibali caught Brajkovic, Van Den Broeck and Pinot as Wiggins had to do his own chase for a short section to give Froome a breather and to then ride again for his leader. Rolland still had his stage hopes up front intact.

Froome came to the front again and Evans was in trouble, Van Garderen waited for him to pace him back, Frank Schleck sat on the Froome/Wiggins tandem until he blew within the sight of the Nibali group.

Froome attacked the others and Wiggins couldn’t hold the wheels, it must have been a mistake as he was told on his radio to stop and wait for the yellow jersey. During the confusion Pinot was away to put time into the white jersey of Van Garderen who is pacing Evans now 1 minute behind Wiggins. 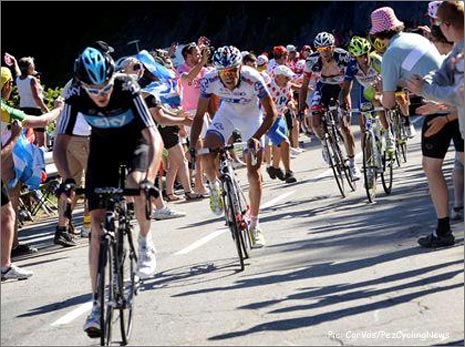 Chris Froome was once again ridiculously strong today at one stage even leaving Wiggins behind – by accident of course.

Froome paces the group up to Pinot with Wiggins, Nibali and Van Den Broeck on his wheel, Froome back to his work-horse position.

The last kilometre and Pierre Roland’s head was starting rock and roll, but he could smell the stage win and his move into the top ten on overall. With torn jersey and shorts from his fall the Frenchman kisses his medallion and freewheels over the line. 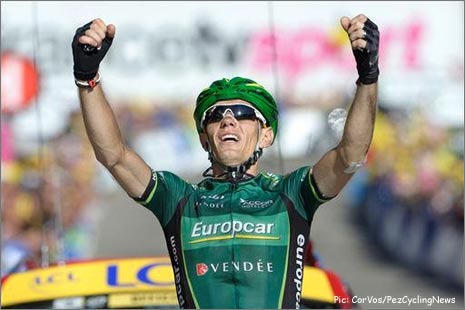 Froome jumps from the group, but Pinot sees it coming and holds his wheel and pass him for second place, Van Den Broeck pulled Wiggins and Nibali home as they have a quick word, congratulations? Maybe. Van Garderen takes care of his leader, Evans with Frank Schleck just passing them for 10th, but the Australian was 1:26 behind Wiggins.

There were lots of losers today, many big names are now nowhere to be seen, Froome and Nibali jump over Evans, but the race is not over yet.

For a short stage it was full of action, from the flag to the finishing banner. Keep it PEZ for Ed’s day on Roadside.