Stage Report: Not the most exciting stage of the Tour, but at least it wasn’t very long at only 3 hours and 40 minutes. The best bits of the race were at the start, as there was a big battle to achieve the escape and then again in the last 20 kilometres as the break fought out the win. Rest day a day early?

A later start to the day gave everyone a long lie and the mechanics to change all the punctures from the climb of the Mur de Pйguиre, at least 30 to the cyclist and more to the moto’s and cars. Today’s stage 15 is from Samatan to Pau (158.5 kms) and by no means flat, nothing too high, but the profile is up or down and not much in between until the last 10 kilometres which are pan flat. The intermediate sprint comes after 101.5 kilometres, it is followed by the 4th Cat Cфte de Lahitte-Toupiйre, the 3rd Cat Cфte de Simacourbe and the 4th Cat Cфte de Monassut-Audiracq, all of which are around 2 kilometres long. The roads in this area are heavy and hard going; it can only be won by a strongman of the peloton. Sylvain Chavanel of Omega Pharma – Quick-Step didn’t start today, he had been ill for a few days and had been taking antibiotics.

Action from the Start!
As soon as the flag dropped the attacks started, there were many attempts, but the first to get any sort of gap included; Yukiya Arashrio (Europcar), David Millar (Garmin-Sharp), Rui Costa (Movistar), Andriy Grivko (Astana) and Bert Grabsch (Omega pharma – Quick-Step). Behind them the peloton was going crazy, but without any combined effort, riders chasing in ones and twos.

The five up front were not being given any presents today, their gap never got above 20 seconds, even with Edvald Boasson Hagen (Sky) coming to the front and holding his arms wide apart to discourage any more chasing…it didn’t work as more riders pressed on to try and join the five.

101.2 kilometres to go and four riders managed to cross over to the five leaders, Alexander Vinokourov (Astana) was one of them, but the race was all back together again within 2 kilometres. 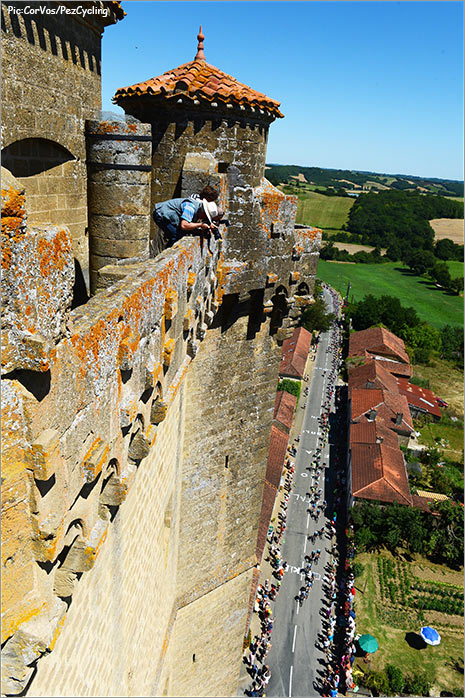 Another group of five tried their luck, this time Thomas Voeckler (Europcar), Christian Vande Velde (Garmin-Sharp), Pierrick Fedrigo (FDJ-BigMat), Samuel Dumoulin (Cofidis) and Dries Devenyns (Omega Pharma – Quick-Step) were allowed to build up a lead of 2:30 with 89 kilometres to the finish, behind them Nicki Sorensen (Saxo Bank-Tinkoff Bank) tried to cross, but was left out to dry for a very long time. The bunch had called a halt to the high speed and had eased into a pre-rest day, rest day with Sky in control.

The Saxo Bank-Tinkoff Bank team came to the front of the peloton and stretched the bunch out in to one line through the village of Les Halles de Bassques with 84 kilometres still to race. This put pressure on the riders in the break to slow enough to allow Sorensen to make contact with the break and the bunch went back to its previous amble.

After 90 kilometres the race passed through the feed zone and the leaders had just over a 6 minute lead and for a long time the gap was kept at that safe distance mostly by the Lotto-Belisol team, who at this point must have been planning for a sprint finish. 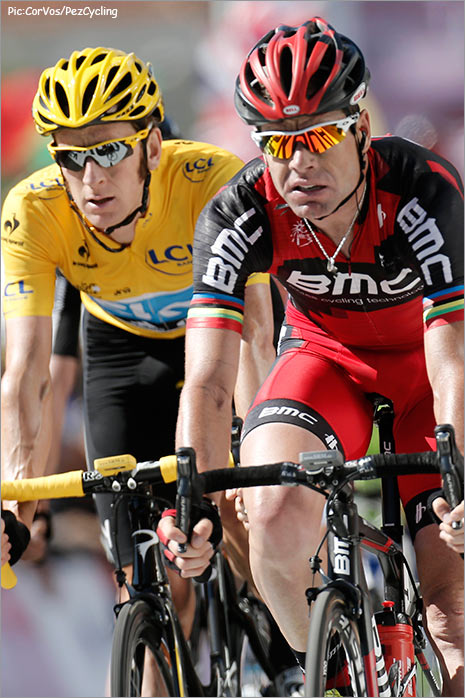 With today’s finish, riders can look forward to tomorrow’s rest day, and then five more days of racing. Can anyone rock the Sky boat?

The intermediate sprint went to Nicki Sorensen without much effort from anyone; Peter Sagan was brought to the front to take 6th place at the sprint for some more points. Over the climb of the Cфte de Lahitte-Toupiйre Thomas Voeckler was first for the 1 KOM point, the bunch were disinterested as they crested 6:32 later.

Over the second climb of the Cфte de Simacourbe with 35 kilometres to go; Voeckler was first again and the peloton was at 9 minutes.

The third and last classified climb, the Cфte de Monassut-Audiracq, and nothing much had changed, Voeckler first again and the lead had gone to over 10 minutes. The next bit of excitement would be the leaders attacking each other.

20 K’s to Pau
The six out front were still riding well together as the passed under the 20 to go banner and their lead was a comfortable 11:26. 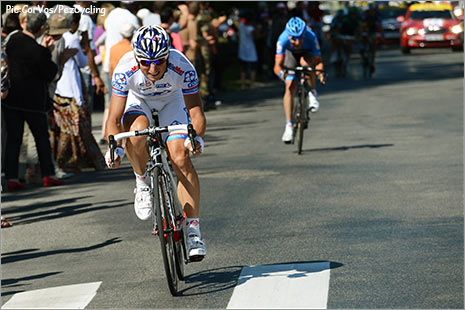 After a solid, concerted effort as a group, the gloves came off in the finale.

Coming to the 10 kilometre mark and Nicki Sorensen was the first to try a little attack, just to put his toe in the water and see what might happen, he was pulled back quite quickly. 2K down the road and Sorensen has another go, he’s caught and Fйdrigo countered and they came together.

Fйdrigo jumped again and Vande Velde got on his wheel as the others waited for someone else to chase. At 5 to go Voeckler attacked the other three, as they were not working, but they caught him back, as Fйdrigo and Vande Velde had lead of 19 seconds over Sorensen and Voeckler and there was 5 second more back to Dumoulin and Devenyns. 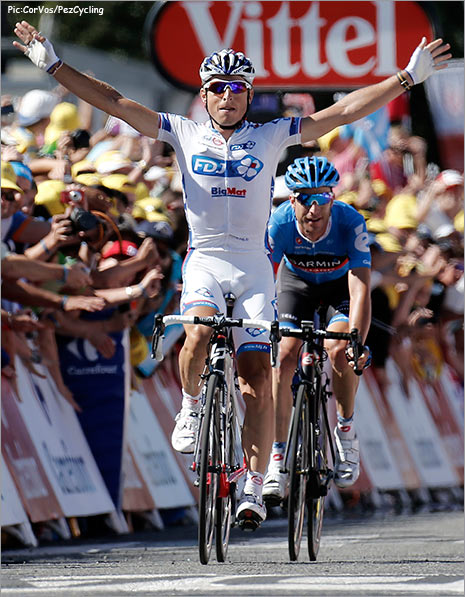 At the last kilometre; Fйdrigo was towing Vande Velde to the finish, the Frenchman was first to open the sprint, but Vande Velde didn’t have the legs to come past Fйdrigo to give him a repeat of his 2010 stage victory. Voeckler outsprinted Sorensen and Devenyns had dropped Dumoulin on the run-in for 5th.

The Lotto-Belisol led out Andrй Greipel to take 7th place for his birthday, Tyler Farrar (Garmin-Sharp) came up fast to just edge out Peter Sagan for 8th. None of the jersey’s changed and tomorrow is a rest day.

Another day closer to Paris, but we have some Pyrenean climbing first, keep tuned to PEZ for Ed’s take on the Tour on Roadside.