Stage Report: The last day of mountains and things could change or show how we will be set in Paris. Alejandro Valverde wanted this stage and his team worked for that, Liquigas-Cannondale also worked for Vincenzo Nibali, but that didn’t work. Sky was again in control at the end, Froome was the strongest, but Wiggins is the man in yellow and Paris is not that far off.

Today’s stage from Bagnиres de Luchon to Peyragudes is another short one at only 143.5 kilometres, but it does have the 1st Cat Col de Mentй starting only 18 kilometres after the start, this is followed by the 2nd Cat Col des Ares, the 3rd Cat Cфte de Burs, the HC Port de Balйs and then to finish the climb of the Peyresourde with the extra jump up to the summit finish on the 1st Cat Peyragudes.

Not as hot as yesterday, with low cloud and fog, should suit the riders, but not sure about our PEZ men; Ed and Martin, you can catch up with their day on Roadside later on.

The Flag Drops
As has been the habit of late, the attacks erupted from the gun, many riders tried their luck before the climb of the Col de Mentй, but the peloton didn’t approve of the rider/escape combinations, Timmer, Pineau, Voigt, Cobo and Albasini all had a go to no avail.

Juan Jose Cobo (Movistar) sat on the front powering up the climb, this split the bunch with the sprinters going out the back and the climber off the front with Cobo. It was a large group that had a small gap and Sky put Edvald Boasson Hagen on the front of the peloton to limit the advantage.

Thomas Voeckler (Europcar) in the mountains jersey was up front with Fredrik Kessiakoff (Astana), both wanting KOM points, Katusha had two at the front of the split with Denis Menchov sitting second rider as they rode through the low cloud/fog on the climb.

Col du Mentй
Alejandro Valverde (Movistar) attacked inside 2 kilometres from the top; he was chased back by Rolland who carried on after passing Valverde. Kessiakoff came straight past him, but Rolland dragged Voeckler back to Kessiakoff and the Frenchman in the spotted jersey sprinted away to take 10 KOM points giving his a lead of 6 points over Kessiakoff. The fog was thick on the descent and visibility was down to a few metres and quite dangerous.

This descent of the Col du Mentй is famous for the crash of Luis Ocaсa in 1971 when he was in the yellow jersey leading Eddy Merckx by 7 minutes. Merckx fell and Ocaсa also crashed, Merckx remounted, but another rider crashed into Ocaсa who had to be flown by helicopter to hospital.

In 2012; Vincenzo Nibali (Liquigas-Cannondale) attacked on the descent to join up with Voeckler, Valverde, Kessakoff and around four others, Boasson Hagen was the workhorse for Sky as usual.

The other riders in the break were not happy that Nibali was with them and after some words, Nibali shook hands with Valverde and sat up to wait for the peloton who were 22 second behind.

The seven up front were: Thomas Voeckler (Europcar), Egoi Martinez (Euskaltel-Euskadi), Rui Costa & Alejandro Valverde (Movistar), Sandy Casar (FDJ-BigMat), Fredrik Kessiakoff (Astana), Jean-Christophe Peraud (Ag2r-La Mondiale), the bunch was regrouping as there had been some rides in trouble (Zubeldia of RadioShack-Nissan) on the first climb.

Col des Ares & Cфte du Burs
Voeckler jumped Kessiakoff for the the summit of the 2nd Cat Col des Ares and took the 5 points, the chase group were 41 seconds back and the peloton were at1:25. Voeckler repeated his points gathering on the Cфte du Burs. Sorensen crashed and was caught by the peloton.

The chasers and the lead group eventually join forces and they head towards the biggest climb of the day, the HC Cat Port de Balйs as the lead went out to 3 minutes. On the climb Azanza & Izagirre (Euskaltel-Euskadi) with Kadri (Ag2r-La Mondiale) and Plaza (Movistar) broke away, Valverde wanted to join, but left it too late, his Movistar team mate; Plaza dropped back from the lead to the chase.

In the bunch Liquigas-Cannondale were putting the pressure on trying to unruffled the Sky train which was missing Richie Porte as he had crashed earlier at the feed zone, but he regained the peloton with a bandage on his left elbow.

The Euskatel-Euskadi tandem led Kadri up the Balйs, Plaza & Costa were pulling the chasers up towards the leaders. Kadri came to the front and Azanza was dropped. Liquigas-Cannondale still had control of the peloton and was cutting into the lead.

Kadri and Izagirre pushed on as all the groups became smaller as Valverde, Leipheimer, Costa and Martinez came across to put six ahead, they had about 30 seconds to the Voeckler group and under 2 minutes to the yellow jersey bunch, which was down to around 40 riders, being led by Liquigas-Cannondale. 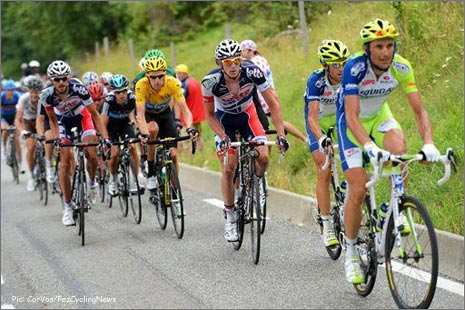 Liquigas tried hard today to set Nibali up but he simply didn’t have it.

As the race got to the 5 kilometres to the top of the Balйs, Rui Costa was leading with Valverde, Kadri, Leipheimer and Martinez just behind him at 20 seconds, and then there was a gap to the Voeckler/Kessiakoff group and 2 minutes to the peloton.

Valverde jumped across to Costa about 3 kilometres from the summit and then went for it on his own. Kessiakoff rode away from the other, but his shadow; Voeckler was on his wheel in seconds. Kessiakoff and Voeckler swept up Martinez first and had Leipheimer and Kadri in their sights as Valverde rode up between the Basque fans.

Port de Balйs Summit
Alejandro Valverde was first, Voeckler out sprinted Kessiakoff, to lead the KOM by 11 points, and Jurgen Van Den Broeck (Lotto Belisol) attacked the peloton at the top for no apparent reason. Valverde dropped like a stone to put his lead on the peloton to 2:38, Voeckler got together with Leipheimer and Kadri and Kessiakoff had to chase to get back to the King of the Mountains jersey.

The Peyresourde and the Peyragudes
Valverde had 2:30 at the start of the climb on the yellow jersey bunch, Martinez and Costa were between and Voeckler with all the other break away riders were either with the bunch or dropped by it. Liquigas-Cannondale had Basso on the front with Nibali on his wheel; Boasson Hagen was next with Froome and as usual Wiggins behind him. RadioShack-Nissan’s Haimar Zubeldia was in trouble at the back as was Sorensen, Kadri and Voeckler.

10 kilometres to go and there was only Valverde out front with a lead of 2:21 over a peloton of around 20 to 30 riders. Jelle Vanendert (Lotto Belisol) must have been feeling good and jumped away, this caused damage at the back, last year’s winner; Cadel Evans (BMC) couldn’t hold the pace.

Jurgen Van Den Broeck jumped across to Vanendert, but the speed wasn’t high enough to shake many of his wheel and Nibali closed up with Wiggins close. Next to try was Pinot of FDJ-BigMat, Nibali didn’t like this and dropped to the back of the small peloton. 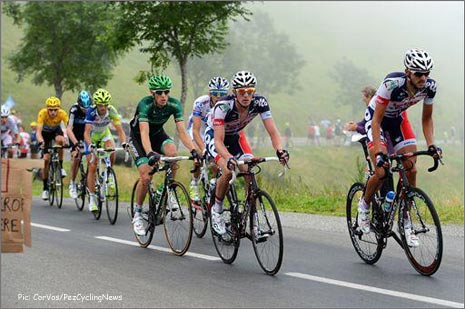 Lotto tried a move but like Liquigas before them their team leader just didn’t have the legs.

Valverde crested the top of the Peyresourde with 1:19 in hand and a little descent before the 3 kilometres up to the finish at Peyragudes. Wiggins, Froome, Van Den Broeck, Pinot and Rolland were together, Nibali, Van Garderen and Horner not too far back.

Froome put the pressure on and Wiggins struggled to stay with him and needed encouragement from Froome to hold the wheel. Valverde was now on the end of his strength as was Wiggins who couldn’t hold onto Froome, but Froome would not be allowed to leave his team leader although it looked like he could do easily. Pinot got up to the Sky pair.

Alejandro Valverde had only 1K to go and it was mostly downhill to the line, next Froome towed Wiggins to the finish followed by Pinot, Rolland, Van Den Broeck, Nibali and Van Garderen. Dan Martin and his cousin Nico Roche were not far down and they were followed by Menchov, Brajkovic and Cadel Evans.

Valverde was very good and his Movistar team worked perfectly for the win. Chris Froome again looked to be stronger than team leader Bradley Wiggins, waiting for him and cajoling him up the mountain. Froome could have caught Valverde for the stage win if he had been allowed to go for it and this would not have endangered Wiggins’ yellow jersey. 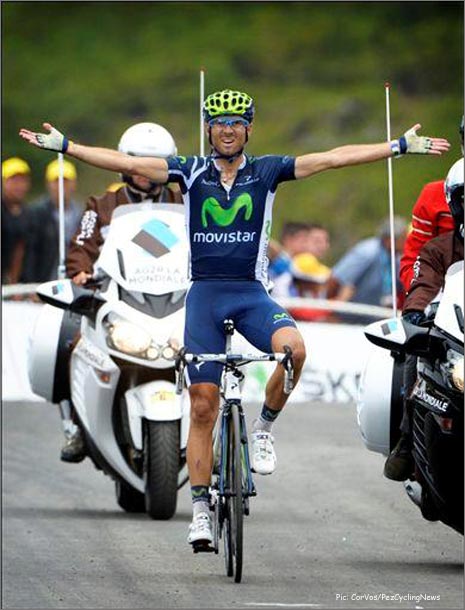 I would say the Tour is over, just the time trial and Paris to go. Wiggins is secure in yellow, Voeckler is KOM, Sagan in green and probably Van Garderen will keep the young riders white.

Keep it PEZ all the way to Paris for race reports and Ed & Martin at Roadside.