Race Report: Bradley Wiggins is one of the fastest time trial riders in the World, so today should have been a bit of a jaunt for the tall Englishman, he didn’t take that way and demolished the others to lengthen his overall lead before tomorrow’s last stage into the centre of Paris. I think now the fat lady has sung! Bring on the Champs Elysйes.

Today’s stage 19 individual time trial over 53.5 kilometre could have been a nail biting cliff hanger, but as things were this morning; the 2 minute and 5 second lead of Bradley Wiggins over his Sky team mate Chris Froome and the 2 minutes and 41 seconds over Vincenzo Nibali (Liquigas-Cannondale) was more than enough for a TT expert in the form of Wiggins. The course is from Bonneval to Chartres, there is a slight rise from the line, but after that it’s fairly flat. An early lap of honour?

First Man Off!
High noon (CET) and the first rider of the 152 still in the Tour flew down the ramp; Jimmy Engoulvent (Saur-Sojasun) is 3 hours, 49 minutes and 9 seconds down. Obviously the last man off was the yellow wearing Bradley Wiggins (Sky) at 16:33.

Apart from the podium there could be a couple of changes in the top ten; the BMC pair of Tejay Van Garderen and Cadel Evans will probably stay in their places, but there could be changes further down finish order as Zubeldia, Rolland, Brajkovic, Pinot and Roche are all fairly close, here is the top fifteen places:

First leader was Patrick Gretsch (Argos-Shimano) with a time of 1:06:41, the German also had the fastest split times; 17:30 at 14 kilometres and 37:55 at 30.5 kilometres. Next fastman to come in with a good time was Garmin-Sharp’s David Zabriskie, he put in a time of 17:42 at the 1st check, at the 2nd checkpoint the American slowed, but lifted his speed to finished in a time of 1:07:18 to hold second place for a while until Vasili Kiryienka (Movistar) came in with 1:06:59. Spanish National time trial champion; Luis Leon Sanchez (Rabobank) was on a good ride, at 14K’s he had the fastest time of 17:27, again at 37K’s with 37:39 then at the finish he took the top position (for the moment) in a time of 1:06:03. Sanchez said after the stage; “Wiggins has to be the favourite, he also won the earlier time trial.” Tall Frenchman Jйrйmy Roy (FDJ-BigMat) pulled out a good time over the last part of the course; his time of 1:07:18 put him in 3rd for a short time. Roy felt it was a hard course because of the wind, he hoped for “a place in the top 15.”

Most aggressive rider from yesterday; Alexandre Vinokourov (Astana) headed out of the start house for (probably) his last Tour time trial, talk is of Chris Froome going to Astana next year, the French sports paper l’Equipe this morning said Astana were willing to buy out Froome’s contract with Sky and that he would be the Astana team leader. Vino’s time of was not at full speed.

Omega Pharma – Quick-Step’s Slovak time trial champion; Peter Velits was only 1 second slower than Sanchez at the first time check, at the second he slowed slightly to be 18 seconds down and he finished in 1:06:15, 12 seconds from Luis Leon.

Point’s leader Peter Sagan (Liquigas-Cannondale) turned in a time of 1:09:47 and KOM Thomas Voeckler (Europcar) finished in 1:13:46, Rien Taaramae (Cofidis) was only 1 minute down on Sanchez at 1:07:03. Ritchie Porte (Sky) worked his way up the intermediate time boards to clock a great time of 1:06:38, just 35 seconds behind Sanchez. He said of the race “It was a great stage with a beautiful course. Chris and Bradley will go much faster than me.” 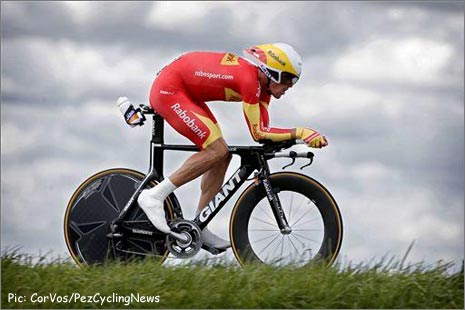 L.L.Sanchez was in the hot seat for most of the day after a superb ride.

The Top Ten Hopefuls
11th placed Nico Roche (Ag2r-La Mondiale) had Andreas Klцden (RadioShack-Nissan) 3 minutes in front of him on the course, but he needs to make 1 minute and 9 seconds on Thibout Pinot (FDJ-BigMat), who was 3 minutes behind him, to move into the top ten, but his main problem was Klцden. The German’s time was 1:08:02 to Roche’s 1:10:52, so it was a move down the overall and not up.

All the riders had done their warm-ups and headed off down the start ramp and we only had to wait around an hour to have the 2012 Tour de France result confirmed.

At the first time check Cadel Evans was off the pace, but his young prodigй Tejay Van Garderen was the new fastest rider until Froome blew his time out of the water, Wiggins demolished them all with the fastest time of 16:49.

The two Sky riders were ripping through the field as Cadel Evans was losing time all the way round. Van Garderen had Evans in sight, but he had slowed in comparison to the others, as Van Garderen passed Evans, there was a nod of the head and the youngster pushed on, but would need 2:37 to move above Van Den Broeck. Froome was faster than Sanchez, but now by only 4 seconds, Wiggins again was showing everyone how to time trial.

As expected Bradley Wiggins was the master of the clock, he dominated the race from start to finish, he posted the fastest times all round course, Froome was not far behind. Luis Leon Sanchez nearly pulled it off, but in the end the speed of the British pair. 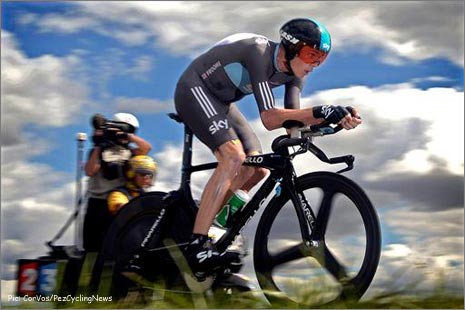 A great ride by Froome today but he couldn’t knock his team leader off the top spot.

The podium was safe, but there has been a few changes in the other placings, the young bloods of Chris Froome and Tejay Van Garderen ran him close and gives us all hope for the future as does the Belgian Jurgen Van Den Broeck. Vincenzo Nibali made some good attacks in the mountains, but was out numbered. Cadel Evans has not been at full health, but he will be back next year. 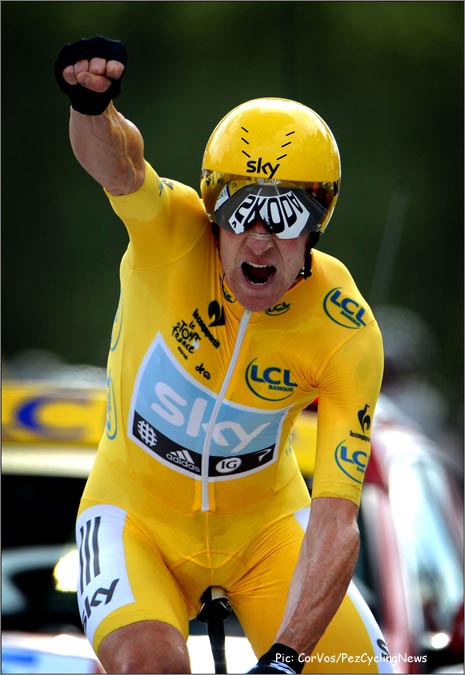 Was it a good Tour? Not the best from a viewer’s point of view, many British people will have liked it because of the winner, but for many there wasn’t a lot of excitement. The best thing about this Tour has to be the new, clean and youthful riders that are coming to the fore.

Keep it PEZ for Ed & Martin down on Roadside and into Paris tomorrow.