Race Report: On an historic day for British cycling, Mark Cavendish decided to make it even better taking the final stage in a stunning sprint. The Manx Missile is now undefeated in sprints on the Champs Elysees – 4 from 4!

The final stage of this year’s Tour was a battle royale on the Champs-Elysees as the 153 riders left in the race raced for some last minute glory with 13 teams still without a win this Tour. Before they could think about saving their Tour by winning the stage though the traditional procession had to occur with the peloton slowly winding their way through the gorgeous Chevreuse valley on their way to Paris at a very leisurely pace.

The traditional photos were taken en route as the jersey holders gathered together, with Tejay Van Garderen taking the White jersey, Thomas Voeckler the mountains jersey, Peter Sagan the Green and of course Wiggo for the yellow. With all competitions wrapped up before this stage, it truly was a promenade for the four who were all just happy to make it to Paris. Before they did though, there was the little matter of the final stage result with Sagan certainly having some interest in the final sprint and Wiggins also wanting to get involved to help his teammate Cavendish.

Sagan and Cavendish would be up against some pretty tough competition for the stage win though with Greipel, Goss, Haedo & Farrar all ready to push them to the line. Also left in the race were numerous attacking riders who would be hoping that the traditional final stage sprint would not occur. These riders included the last winner from a breakaway on the Champs-Elysees, Alexander Vinokourov who surprised the peloton in 2005 with a late attack to steal the victory from under the sprinter’s noses.

It would be Vino’s last Tour (I know he said that last year too – but this time I think he means it) and he would be a sentimental favorite for some along with another Tour retiree, George Hincapie who would be hoping for a final break also. The first break of the day as they entered Paris coincidentally contained Hincapie who led Chris Horner across the finish line in a demonstration attack to say goodbye as the peloton started the first of 8 laps of the Champs Elysees. 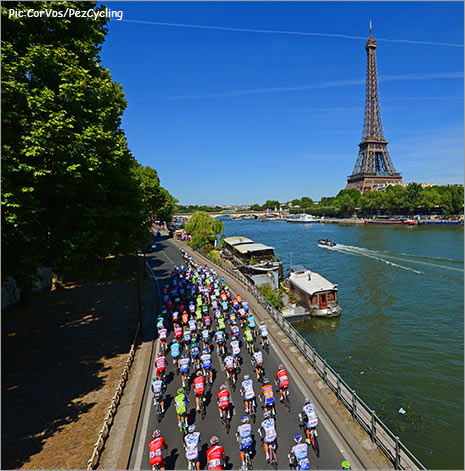 The first serious attack to then go away was another couple of veterans in the form of Danilo Hondo (Lampre) and Jens Voigt (RadioShack-Nissan) who got away on the 2nd lap and quickly built up a small gap over the strung out peloton behind. After a couple of laps Hondo couldn’t continue with his fellow German’s pace though and he dropped back to the peloton as Voigt pushed on alone to be joined shortly after by a group of 10 riders that bridged across which included Burghardt (BMC), Bak (Lotto-Belisol), Kroon (SaxoBank-Tinkoff) and Tankink (Rabobank). These 11 riders worked well together to build up a 30s gap with 20km remaining to be raced but their job was always going to be difficult with Sky, Liquigas and Orica-Greenedge all contributing to the chase behind.

The high pace on the cobbles took its toll on the break and with 13kms remaining the group splintered with the unstoppable Voigt forming a group of three riders with Sebastien Minard (Ag2r) and Rui Costa (Movistar). With 10kms to go these three had a 22s gap over the Liquigas and Sky led peloton as the rest of the break was reabsorbed. 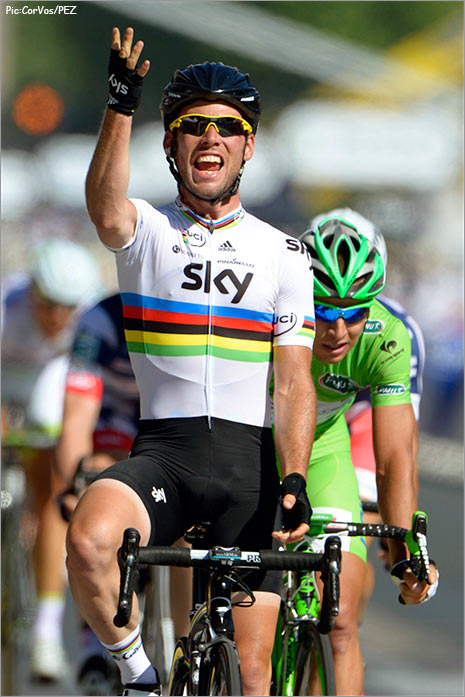 With just one 6km lap remaining the trio still had a 15second gap but their task was made more complicated by the arrival of SaxoBank on the front of the peloton who put on an impressive display of power. This Saxo power cut the break down to just a handful of seconds before Sky took over to finish off the kill and deliver Cavendish to his third win at the Tour this year.

The Voigt led group was then caught at 3km remaining and the sprint royale could commence. And what a sprint it was. Wiggins tried to lead Cav out with 1 kilometer remaining but was overpowered by the trains of SaxoBank and GreenEdge but Sky didn’t panic with Boasson Hagen taking Cav back up to the front and dropping him off perfectly at the final corner where Cav opened his sprint. It was a long sprint and Goss was positioned perfectly in Cav’s wheel but he simply couldn’t come around as the Manx Missile was simply too strong and too fast. 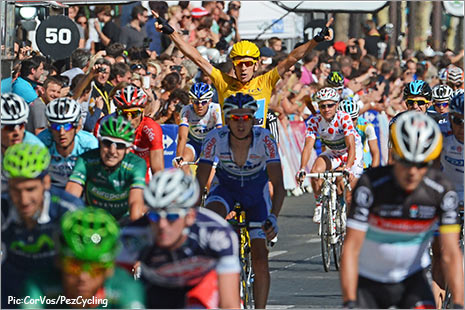 Wiggins crossed the line a few seconds later with his arms aloft just like Cavendish to start his celebrations for a well deserved Tour victory and an amazing team performance by Sky. Their leader was the strongest, their domestiques were the strongest and today Cavendish showed that their sprinter was the fastest. With six stage victories for the team, first and second on General Classification and a close second in the teams competition it was truly a dominating performance by the British team.

Much like his team leader Wiggins throughout the Tour, today Cavendish was simply untouchable as he sprinted his way into the history books as the first reigning World Champion to win on the Champs-Elysees and continue his undefeated run on the famous boulevard. Four sprints on the Champs-Elysees for Cav and four victories. Chapeau.