Stage Report: The Tour entered France today along a biting, punchy course with a nasty uphill finish. It made it anyone’s game, but Peter Sagan pounced on the opportunity and brought home an amazing win in a twisty, turny, crash-filled finale. Read on!

Today’s 197 km rolling stage still Orchies – Boulogne-sur-Mer 197kmhad a plethora of Cat 3 and 4 climbs in it, mostly sprinkled toward the end as the Tour entered France for the first time in the 2012 edition. A quintet of opportunists made their escape at kilometer 6, including Morkov (Saxo Bank), Bernaudeau (Europcar), Grivko (Astana), Moreno (Euskaltel) and Minard (AG2R).

While claiming not to be in contention for the green jersey, Mark Cavendish seemed to be keen to it as he swiped the lone intermediate sprint points at Senlecouse. This Cav/Sagan batte will be one to watch in the days to come. Perhaps Cav, thinking the hilly finale might be too much for him, thought it better to swipe points wherever he could.

Now in France, with the smaller roads and all of today’s courses twists and turns, the crashes were inevitable and we had a few right off the bat. Victim #1 was Kanstantsin Siutsou, who was sent to hospital, forcing his abandonment after a wreck involving names like Hejsdahl, Farrar, and Vinokourov among others.

At 37 to go, Grivko hit the gas, and Bernadeau was dispatched, leaving the break as just four riders. They were playing with about 2:30 in hand, trying to keep their advantage before the clump of climbs right before the finish in Boulogne-sur-Mer. They hit the slopes of the Cote du Mont Violette (.6km, 10.5%), with Mikal Morkov stuffing the KOM points in his jersey pocket at the top without much of a fight from his breakmates. 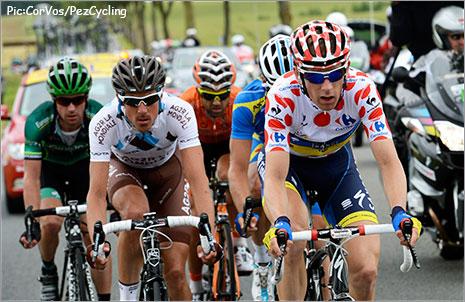 Another day, another break for Michael Morkov.

Kaboom! Another huge pile up near the front of the race as a touch of wheels sent a gaggle of riders to the deck and into the ditches. Bikes and bodies everywhere as support personnel tried to sort out the wreckage. Hoogerland, Farrar (again) and about 15 other riders all got back on and chased to catch the main group, with another group behind them, and unfortunately a few other lads still on the deck at the point of the crash. Word came quickly that the busted up looking Rojas from Movistar indeed had abandoned. Not official but it looked like a collarbone break.

Ahead, the break wasn’t quite settled as they were attacking each other and seemingly losing some impetus. Morkov was trying to attack his breakmates into working.

Another giant chase group came into view, and it contained none other than World Champion and yesterday’s stage winner Mark Cavendish. From the speeds of the lead group, and the terrain ahead, Mark wasn’t looking too good to regain contact. The Farrar group and the Cavendish group came together with Garmin-Sharp teammates doing the most chasing.

Ahead, Radioshack and Movistar kept the pace high, and the break still held about a minute.

Chaos reigned behind as chase groups scattered the road, and Euskatel’s Sanchez had some kind of mechanical with only neutral service to help. Language barriers seemed to cause extra frustration.

Morkov latched on to Grivko’s move up front, dropping the other two, with the Saxo-Tinkoff rider snagging the 1 point atop the next climb. A few more climbs to go, and now the break was just a duo. 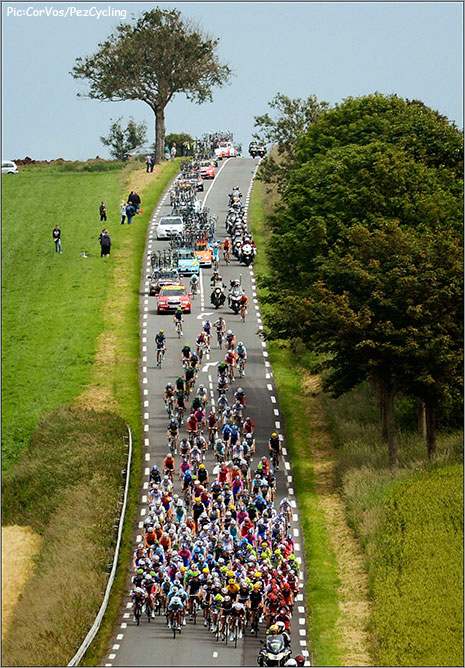 Behind, Garmin-Sharp still were chasing like hell to bring their man Dan Martin back to the group, with Christian Vande Velde taking some massive pulls.

The main group still had all the GC favorites in it, as they navigated the skinny roads with some riders taking brief forays off the shoulder for some pseudo-Cyclocross. Nervous times in the Tour de France for everyone. Yellow jersey wearer Fabian Cancellara was tucked comfortably and seemed chippy. The punchy finish suited him and perhaps he was thinking of a stage win in yellow.

The duo up ahead was mowing down the climbs toward the finish, with Grivko giving Morkov all the KOM points and both riders working well together.

Liquigas drove the pace, with the usual Watchmen (Voight, Hincapie, etc) looking after their leaders. The breakaway up ahead hit the 10km to go banner, still throwing everything they had at the race as they approached the penultimate cat 3 climb of the Cote du Mont Lambert.

Team Sky was now on the front, which quickly shaved down the break’s advantage to 28 seconds and continued to eat into that advantage as they picked up speed. Also picking up speed was the sprinkling coming from the clouds.

Mikal Morkov snapped on the Cat 3 climb, as Grivko went on alone but that wasn’t to be as the group was in sight behind the Saxo-Tinkoff rider. Alas, Grivko was swept up as Basso drove the pace on, clearly for Sagan. The course finish certainly suited Sagan, and with his hot hand he had to be a favorite.

5 km to go, and the group was screaming toward the final climb and the finish line. Radioshack took the reins for their maillot jaune wearer Cancellara.

Sylvain Chavanel made a dig around a bend, and attacked the group. His small advantage was valiant, and he dug his heels in. BMC, recognizing the danger, sent their men to the front to catch the Frenchman. 3km to go and Chavanel was all in, mouth open and shoulders rocking. He had somehow carved out 12 seconds! In his zeal he almost overcooked a weird combination of roundabouts, and the chasing group behind made the same mistake. 8 seconds now for Chavanel. Chris Horner now on the front of the chase, driving it as they rolled under the 1km banner and the climb kicked in. They rolled up Chavanel and the group spread out all over the place as seemingly everyone fired their jets. A Vacansoleil rider touched wheels and hit the deck, causing a stoppage about 10 riders back, holding up Bradley Wiggins. Inside 3k, he wouldn’t lose any time, so the Briton calmly rode in. 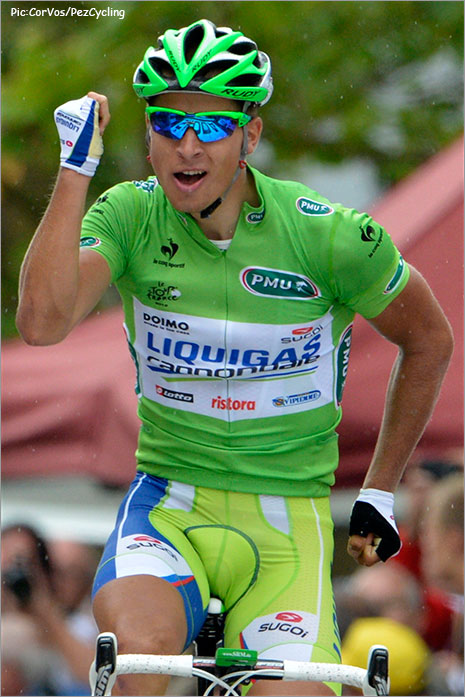 The climb really bit down, and Boasson-Hagen gave a dig, but there was no stopping the super strong Peter Sagan, who came around the final bend with a gap and had time to sit up, cross himself, then mimic running as he swung his arms back and forth as he crossed the line. Is there any stopping this man?

7 minutes later the Cavendish group with Hoogerland, Voeckler, and others came across the line. Bad break for the Europcar rider.

Tour de Pez: Carried Along By The Cheers