Race Report: The longest stage of the Tour saw the race start at a frenetic pace as they left the Alps before the GC riders called a truce and let the attackers have their day.

With 226km on the menu today Stage 12 was the longest of this year’s Tour and with 2 big Category 1 climbs the stage had potential to cause damage to the GC. Unfortunately this wasn’t the case as both the climbs came in the first 80km so the chances of a GC rider doing something there were minimal. That certainly didn’t stop the peloton hitting the climbs at a phenomenal speed though. 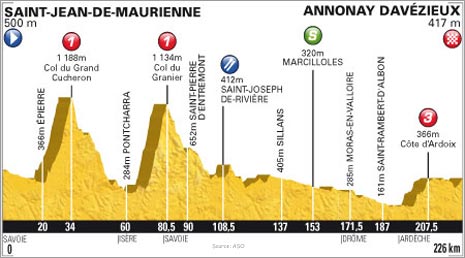 Two hard climbs at the start followed by a LONG valley meant that the GC battle would be virtually non-existent today.

A lot of riders wanted to be in the break today, convinced that it could go to the finish and consequently the speed was on from the start. Just 12km into the race a large group of 17 riders managed to get away as they approached the first big climb, le Col du Grand Cucheron. On the climb this break lost a few riders as the long slopes did their damage, leaving us with 12 riders in the break; Popovych (RadioShack), Gautier (Europcar), Koren (Liquigas), Millar (Garmin), Pйraud, Bouet (AG2R), Edet (Cofidis), Martinez (Euskatel),Gusev & Vorganov (Katusha), Sцrensen (Saxo Bank) and Kiserlovski (Astana).

This group consolidated their lead on the long descent and in the small valley before the next climb where the steeper slopes of le Col du Granier really took their toll – both in the break and back in the peloton. Carnage was the best word for it with riders spread out all over the climb, getting dropped from the break, riders attacking to try and get across to the break and of course numerous riders getting dropped from the peloton.

The big news as far as the French were concerned at least was the very bad day being had by 10th overall at the start of the day, Thibaut Pinot (FDJ-BigMat) who was dropped early on the climb and quickly lost 3minutes on the Sky led peloton who were safely shepherding Wiggins as per usual. Next piece of bad news for the French was their hero from yesterday and current 9th overall Pierre Rolland (Europcar) who was also dropped from the now extremely reduced peloton.

Back in the break, Kiserlovski and Pйraud were driving the pace to make it just 5 left with Millar, Gautier and Martinez hanging on to what would prove to be the break of the day. Kiserlovski took the KOM points to defend his teammate’s current lead in the competition as the rest of the break was swept up by the charging, diminished peloton.

Impressively Peter Sagan was still there, right alongside Wiggins, Evans and co. as he hoped to win the intermediate sprint a full 73km after the summit of the col. With the fear of other sprinters getting back on, he attacked on the descent with a small group including 2 teammates to try and get away.

Matty Goss and his Orica-GreenEdge had climbed very impressively though and they were only 2minutes down on Sagan going over the top and they put their entire team on the front to bring Sagan back before the sprint. The Aussie team successfully strung out the entire peloton at high speeds as they chased Sagan back and at one moment it looked like they would also bring back the original Millar led break. Once they brought Sagan back though, Greenedge turned off the gas and the stage turned into a semi-rest day for the peloton as everybody simply sat up. All the dropped riders got back on and the gap to the break of the day quickly approached the 13minute mark. It was at this moment that Sky went to the front to simply ride tempo and the training ride commenced for the rest.

The result was now to be decided between the five out front with Europcar hoping to win with Gautier which would make an amazing 3 stages in a row for the French team! 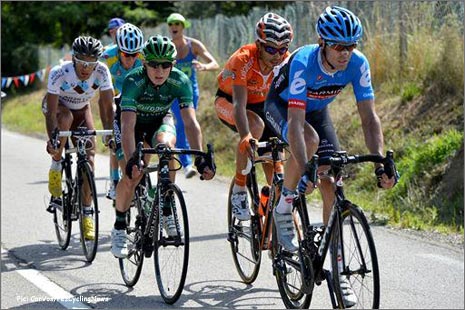 Millar leads the break of the day which was off the front for more than 200km.

Alas it wasn’t to be for the men in green as J.C Peraud(Ag2r) attacked 2.5km from the finish leaving Gautier behind and only Millar was able to get across to Pйraud’s wheel. The race was now between these two in a classic man on man sprint.

It was a test of nerves in the final kilometer as Peraud refused to come through for a turn but Millar proved to be too quick in the sprint to take another great win to add to his long palmares. 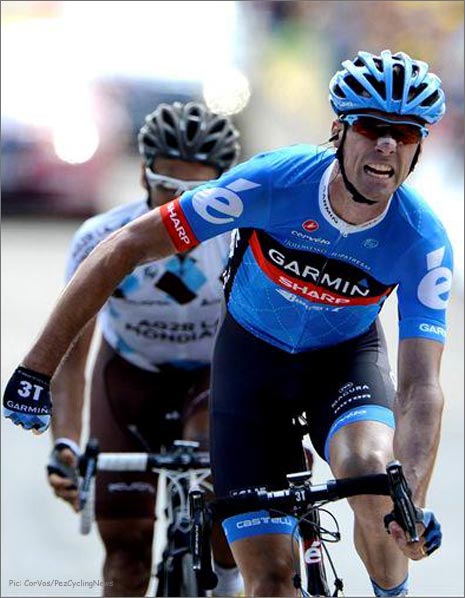 Meanwhile the peloton came in 8 minutes later led home by Goss ahead of Sagan in a slightly controversial sprint as Goss deviated from his line in the final meters. Not too much in it from my Australian eyes but our Slovakian readers probably disagree with me – as did the race jury. Goss was relegated to last rider in the peloton, losing his points and this incident may well seal Sagan’s green jersey title in Paris.