Race Report: The BIG race of the year is on the Belgian roads of Liege with the 6.4 kilometre prologue; Bradley Wiggins was tipped for the win, but that man Fabian Cancellara had different ideas and took a staggering 7 seconds out of the man from Sky. Cadel Evans lost 10 seconds on Wiggins, not too much with three weeks still to go to Paris. The Tour de France is here!

The prologue individual time trial in Liege is 6.4 kilometres of flat city roads, between the start and finish on the Boulevard d’Avroy there are some long straight sections, but with two “U” turns, three roundabouts and four other technical corners with also a sweeping curve to be tackled twice on the Boulevard de la Sauveniйre. An interesting course that could suit the prologue specialist and the TT rider, with the chance of a sprinter putting up a good ride thinking of the future flat stages and the chance of the yellow jersey in the coming days. First rider off at 14:00 CET was Tom Veelers of Argos-Shimano and last, at 17:17 CET was Cadel Evans, last year’s Tour winner, from BMC. All the riders were started at 1 minute intervals; normally the top ten or twenty have a 2 minute gap, as the course is short there is no need.

The 2012 Tour de France is on the road!
Right on 2 o’clock Tom Veelers (Argos-Shimano) kicked out of the start house, at the 3.5 kilometre check his time was 3:49 and his final time of 7:47 was reasonable, but it lasted till Astana’s Andriy Grivko put up a time of 7:28, with a split time of 3:41 to set the bench mark for the early starters. Steve Cummings (BMC) put in a great ride to push Jens Voigt (RadioShack-Nissan) off the second step, Cummings split was 3:50 and a final time of 7:31, but there were many more riders to come.

The big gear pushing, ex-time trial world champion; Bert Grabsch (Omega Pharma – Quick-Step) was disappointed with his ride of 7:39, the course was too short for his style of testing and he should do better in the longer time trials later in the Tour.

David Millar (Garmin-Sharp) has been sick over the last couple of day, but still managed a time of 7:31 to take second place from Cummings, his time check was 3 seconds slower than Grivko, which was the same time loss at the finish.

A new fastest time came in from Brett Lancaster (Orica-GreenEdge) of 7:24 a good 4 seconds faster than Grivko, the fast Australian had an average speed of 51.9 kph, and although the course isn’t too technical there were sections of cobbles and bad road surfaces to slow the riders down. Andrй Greipel was also pushing a big gear like his countryman Grabsch and was at the same speed. 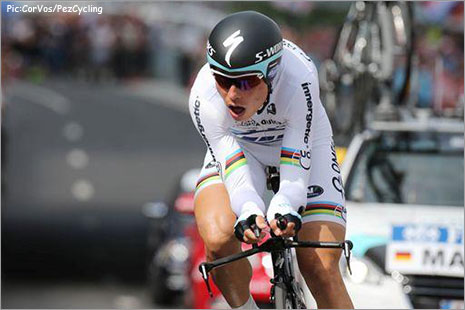 Tony Martin’s Prologue hopes were derailed by a flat tire, but they might been nonexistent anyhow considering Cancellara’s ride…

Next leader was Sky’s Edvald Boasson Hagen in the same time as Lancaster; 7:24, but the Norwegian had a fraction of a second advantage, so he was top man. World road race champion; Mark Cavendish (Sky) had a handy ride with a time of 7:36 which puts him in a good position for possible yellow jersey aspirations over the next few sprinter days.

Andreas Klцden (RadioShack-Nissan) was showing that there was still life in the old dog yet with a time of 7:32, out on the course; Sylvain Chavanel (Omega Pharma – Quick-Step) put up the fastest half way time 3 seconds faster than Boasson Hagen and Lancaster, he kept the speed up to take the lead with 7:20.

Next “Star” to hit the ramp was Philippe Gilbert (BMC) resplendent in his Belgian TT champions skin suit, the local crowd loved him and he was trying very hard to please with a split time of 3:37, 2 seconds slower than Chavanel and a finishing time of 7:25 as he had slowed in the last half of the course. Janez Brajkovic (Astana) was not far off the pace with 7:35, same as Luis Leon Sanchez, the Spanish TT champ (Rabobank), who looked like he rode casually round for a time of 7:40, much the same as Oscar Freire (Katusha) in 7:49.

George Hincapie (BMC) started his 17th Tour de France as Ivan Basso (Liquigas-Cannondale) finished in 7:42, Hincapie’s time was 7:33 for his last Tour de France prologue. Levi Leiphiemer was a little disappointing with a time of 7:41, not too good for a rider with overall aspirations, Rui Costa (Movistar), the Tour de Suisse winner, was nearly 3 seconds faster than Leipheimer. Chris Froome (Sky) was being chased by Peter Sagan (Liquigas-Cannondale), Froome could be battling for an overall place later in the Tour and today he put up 7:29, Sagan has stage wins and maybe the green points jersey in mind, he nearly fell on the “U” turn, saving himself with one foot on the ground, his time was 7:37. David Zabriskie (Garmin-Sharp) wasn’t on form with 7:39. Frank Schleck (RadioShack-Nissan) lost a load of time at 7:51. Tejay Van Garderen (BMC) had a good enough time for 2nd place with a very fast 7:23.

World time trial champion; Tony Martin (Omega Pharma – Quick-Step) had an enormous chainring, looking like it could have 55 teeth. Martin was at the same time as Chavanel at half way, but a puncture and a bike change gave him a time of 7:35, he could have won today. Alejandro Valverde (Movistar) was also not fast with 7:48. 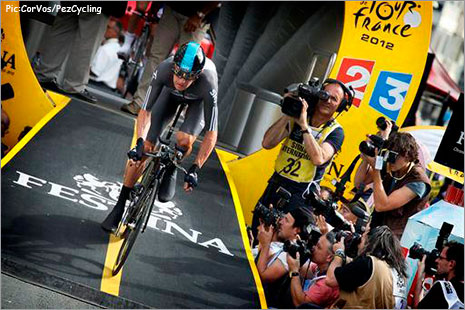 Bradley Wiggins led home the GC favorites with a stellar ride to finish second on the day.

The man tipped to win today and in Paris; Bradley Wiggins (Sky) looked like he was going for it, but his mid-time was 6 seconds down on Chavanel, Wiggins sped up on the second half to pull it back and take the lead with 7:20.5 second, 0.42 up on Chavanel. Canadian Giro winner Ryder Hesjedal (Garmin-Sharp) has not been tipped, but I would put some money on him to do a ride in the Tour, his time was 7:31. Vincenzo Nibali (Liquigas-Cannondale) had the same time as Hesjedal.

Fabian Cancellara (RadioShack-Nissan) was the only man left that could beat Wiggins on this course and was the fastest at halfway, 1 second faster than Chavanel. 7:13 was the phenomenal time the big Swiss rider demolished the opposition with. 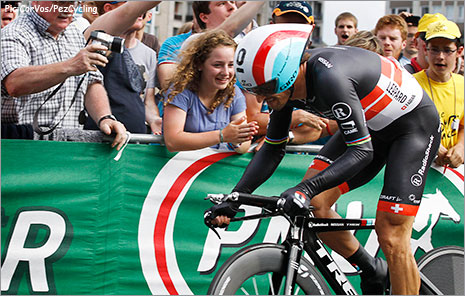 Cancellara on his way to his second career Prologue victory in Liege.

Last year’s Tour winner, Cadel Evans (BMC) was 1 minute behind Cancellara and was 1 second faster than Wiggins at halfway, his strong ride gave him a reasonable time of 7:30 which is good in comparison to the other GC hopefuls, a 10 second loss to Wiggins is not so bad this early in the Tour. 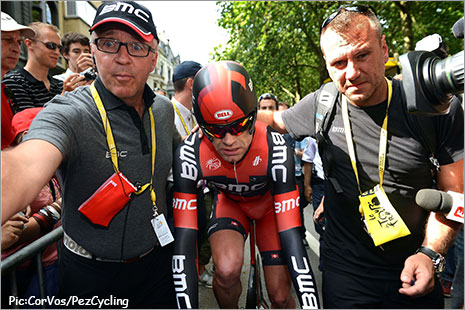 For a course not suited to him, Cadel Evans acquitted himself very well – he lost only ten seconds to Wiggins.

Fabian Cancellara will be in the yellow jersey tomorrow and gave RadioShack-Nissan its best result this season. Keep it PEZ for all the Tour action for the next three weeks; daily race reports and our men down on the “Road Side.”